Read Theodosia and the Staff of Osiris-Theo 2 Online

Theodosia and the Staff of Osiris-Theo 2 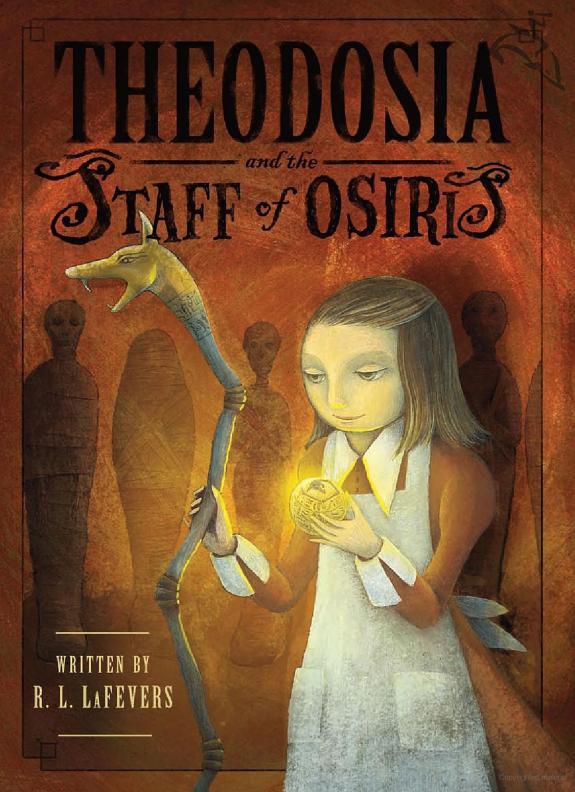 Theodosia and the Staff of Osiris
R. L. LaFevers

The text of this book is set in Minister Book.
The illustrations are acrylic on board.
Map of 1905 London used courtesy of the Harvard Map Collection.

Library of Congress Cataloging-in-Publication Data is on file.

For odd ducks everywhere.
Remember, "odd duck" is just another name
for a swan.

And since this book had so very much to do with mummies,
it seems only right that I dedicate it to my mummy,
Dixie Young,
who ran with the wolves (or maybe it was the jackals!)
long before there was a book written about it
and had to find her own way through the wild woods.
And even with all that, she managed to hold the path open for others.
I only wish I'd understood how hard it must have been earlier.

CHAPTER ONE
A Grand Fete

T
HE LACE ON MY PARTY FROCK
itched horribly. I don't understand how they can make things as complex as motorcars or machines that fly but can't invent itchless lace. Although Mother didn't seem to be plagued with this problem, I would have to pay close attention to the other ladies at the reception this evening to see if they exhibited any symptoms.

"Surprisingly"? Whatever did he mean by that, I wonder?

"I would have thought you'd be chattering a mile a minute about Lord chudleigh's reception."

Tonight was to be my big introduction to professional life. And I planned to savor every second of it. I would be the first eleven-year-old girl ever to walk in their midst. What if they should ask me to make a speech? Wouldn't that be grand? I would stand there, with all eyes on me—keepers and lords and sirs and all sorts of fancy folk—and then I would ... have to say something. Maybe having to speak wouldn't be such a great idea after all.

Mother put her gloved hand on Father's arm. "She's most likely nervous, Alistair. The only young girl among so many important dignitaries and officials? I would have been tongue-tied at her age."

Well.
That
wasn't very comforting. Maybe I should have been more nervous than I was. The carriage turned a corner and my stomach dipped uneasily.

We reached Lord Chudleigh's residence in Mayfair, a large red brick mansion with white columns and windowpanes. At the door, a butler bowed and greeted Father by name. Then we were motioned inside, where we joined an absolutely mad throng of people, all dressed in fine frocks and evening coats. There were marble floors, and the hallway sported Greek columns. Actually, the whole place had the touch of a museum about it: Grecian urns, a bust of Julius Caesar, and even a full coat of armor standing at attention. Suddenly I
was glad of all that itchy lace—otherwise I would have felt dreadfully underdressed.

I slipped my hand into Mother's. "Lord Chudleigh's house is even grander than Grandmother Throckmorton's," I whispered.

"Don't let her hear you say that," Father said.

"How could she possibly hear me?" I scoffed. "She's miles away in her own grand house."

The look on Father's face gave me pause. "Isn't she?" I asked hesitantly.

"I'm afraid not." His tone was clipped, as if he wasn't very happy about it, either. "She moves in the same social circles as Lord Chudleigh."

That was the sort of news that could ruin an entire evening. one might think it was a bit of an overstatement, if one didn't know my grandmother.

I stared out at the crowd of people, desperate to spot Grandmother. If I saw her first, it would make avoiding her all that much easier.

Although really, I oughtn't worry,
I told myself as we moved into the enormous ballroom. I was on my best behavior and had no intention of drawing any unpleasant attention to myself. Not even Grandmother would be able to find fault with me tonight. Except she believes children in general, and me
in particular, should be seen as little as possible and heard even less. Just my being here would be an enormous affront to her sense of propriety.

Music played in the background, but people weren't dancing—they just stood about talking and drinking champagne. We weaved our way among the guests until a tall man who looked vaguely familiar waved us over. Father immediately altered his course and began herding Mother and me in that direction.

When we reached the gentleman, he leaned forward and thumped Father on the back. "It's about time you showed up, Throckmorton. At least you had the good sense to bring your lovely wife."

Mum put her hand out, but instead of shaking it, the man lifted it to his lips and kissed it!
He'd better not try that with me,
was all I could think. Luckily, he didn't. In fact, he ignored me until Father cleared his throat and put his hand on my shoulder. "And this is my daughter, Theodosia, Lord Chudleigh. The one we spoke about."

"Ah yes!" Lord Chudleigh bent over and peered down at me. "Our newest little archaeologist, eh? Following in your mother's footsteps, are you, girl? Well done." He reached out and patted me on the head. Like a pet. I'm sorry, but you simply don't go around patting people on the head like dogs!

Father tightened his hand on my shoulder in silent warning. "So. What's all this I keep hearing about an artifact of your own?"

Chudleigh looked smug. "After you came rushing home in such a hurry, I had to make a quick run down to Thebes to secure the site."

Father winced slightly. "So you've mentioned." Under his breath he added, "Three times." Then, louder, "I'm terribly sorry about that. If my son hadn't been so ill..."

"Eh, it felt good to get out into the field and get a taste of what you do." Chudleigh nudged Father with his elbow. "I got a chance to find a little something of my own down there, too. Standing in plain sight, it was. Don't know why you and your wife didn't send it straight along with the first batch. In fact, I have a treat for everyone tonight." He puffed up his chest and rocked back on his heels. "In honor of my most recent find, we're going to have a mummy unwrapping!"

A mummy unwrapping! My stomach recoiled at the very idea. Didn't he understand that mummification was a sacred death rite of the ancient Egyptians? That unwrapping a mummy would be the same as undressing his grandfather's dead body? "Sir," I began, but Father's hand pressed down on my shoulder again. Surely I was going to be bruised black and blue from all this hand clamping.

"Fascinating, sir," was all he said. "We'll look forward to it."

"Good, good. Thought you might." Chudleigh nodded. Father excused us, took Mother's elbow and mine, and began to steer us away.

Mum muttered under her breath, "I thought unwrappings went out with Queen Victoria."

I whirled around to Father when we were out of earshot. "Why didn't you say something? That's desecration, isn't it?"

"Yes, I suppose it is, Theodosia. But I'm not personally responsible for every mummy that comes out of Egypt, you know. Besides, the man's on the museum's board. I can't risk getting on his bad side, and telling him that unwrapping his new mummy is bad form would certainly do that."

I turned to Mother.

"Oh, no," she said. "Don't look at me. I've already got a hard enough row to hoe being a woman in this field. I can't afford any appearance of sentimentality or emotion."

Well, it had been worth a try. "Where do you think Chudleigh found the mummy?" I asked. "I never saw one in the tomb or annex. Did you, Father?"

"Well, no. But then again, I was preoccupied with getting you out of there safely. Now, let's get this wretched evening over with.
Oomph!
"

Mother removed her elbow from Father's ribs. "Tonight's supposed to be a treat," she reminded him.

Indeed, I had hoped for a lovely evening out with my parents. I had also hoped that my dressing up in fancy clothes and attending one of their social events might have allowed them to see me a little differently.

Or simply
see
me, rather than spend the entire evening looking over my head at other adults.

Pretending I hadn't heard them, I raised up on my tiptoes, trying to spot the mummy. I couldn't believe I would have overlooked a mummy lying about in plain sight, even if I had been being chased by the Serpents of Chaos.

It was hopeless. There were too many people, all of whom were taller than I was. When I pulled my gaze back down, I found an elderly man examining me through his monocle as if I were a bug at the end of a pin. A very round woman dressed in mustard-colored ruffles lifted her lorgnette to the bridge of her nose, then tut-tutted. Honestly! You'd think they'd never seen an eleven-year-old girl before.

"I suppose we'd best go pay our respects to Mother." Father made the suggestion with the same enthusiasm he might have shown for leaping off the London Bridge straight into the foul, icy water of the river Thames.

Which was precisely how I felt about seeing Grandmother, frankly. Luckily, the crowd shifted just then and I spied someone I recognized. "Oh look, Father! There's Lord
Snowthorpe." And although he wasn't one of my favorite people, he
was
standing next to one of my favorite people, Lord Wigmere. Only, I wasn't supposed to know Wigmere even existed, as he was the head of the Brotherhood of the Chosen Keepers, a secret organization whose sworn duty was to keep watch over all the sacred objects and artifacts in the country. Because the British Empire had amassed quite a few relics and ensorcelled items, it was quite a job. It was the Brotherhood that stood between our country and any of that ancient magic getting loose and wreaking horror upon us. Well, them and me, that is. I waved at the two men.

Didn't Father realize that Snowthorpe was a hundred times better than Grandmother? Besides, I was hoping one of these gentlemen might be as repulsed by the mummy unwrapping as we were. Since they didn't work for Lord Chudleigh, perhaps they could put a stop to it.

When we reached Snowthorpe, Lord Wigmere winked at me, then ever so slightly shook his head, letting me know I wasn't to let on I knew him. I winked back.

There were a lot of false hearty hellos and good-to-see-yous exchanged, then Snowthorpe got down to his real reason for wanting to say hello: snooping. "I say, did that Heart of Egypt of yours ever turn up?" he asked.

Letters at Christmas by Amber Lin
The Legacy by Fayrene Preston
Twice Dying by Neil McMahon
Lord of Lightning by Suzanne Forster
Naomi & Bradley, It All Comes Down… (Vodka & Vice, the Series Book 1) by Angela Conrad, Kathleen Hesser Skrzypczak
The Maleficent Seven (From the World of Skulduggery Pleasant) by Derek Landy
At Your Service (Silhouette Desire) by Amy Jo Cousins
Chosen By The Dragon by Imogen Taylor
Shattered Bonds: Book Seven of Wicked Play by Lynda Aicher
Savor by Duncan, Megan
Our partner