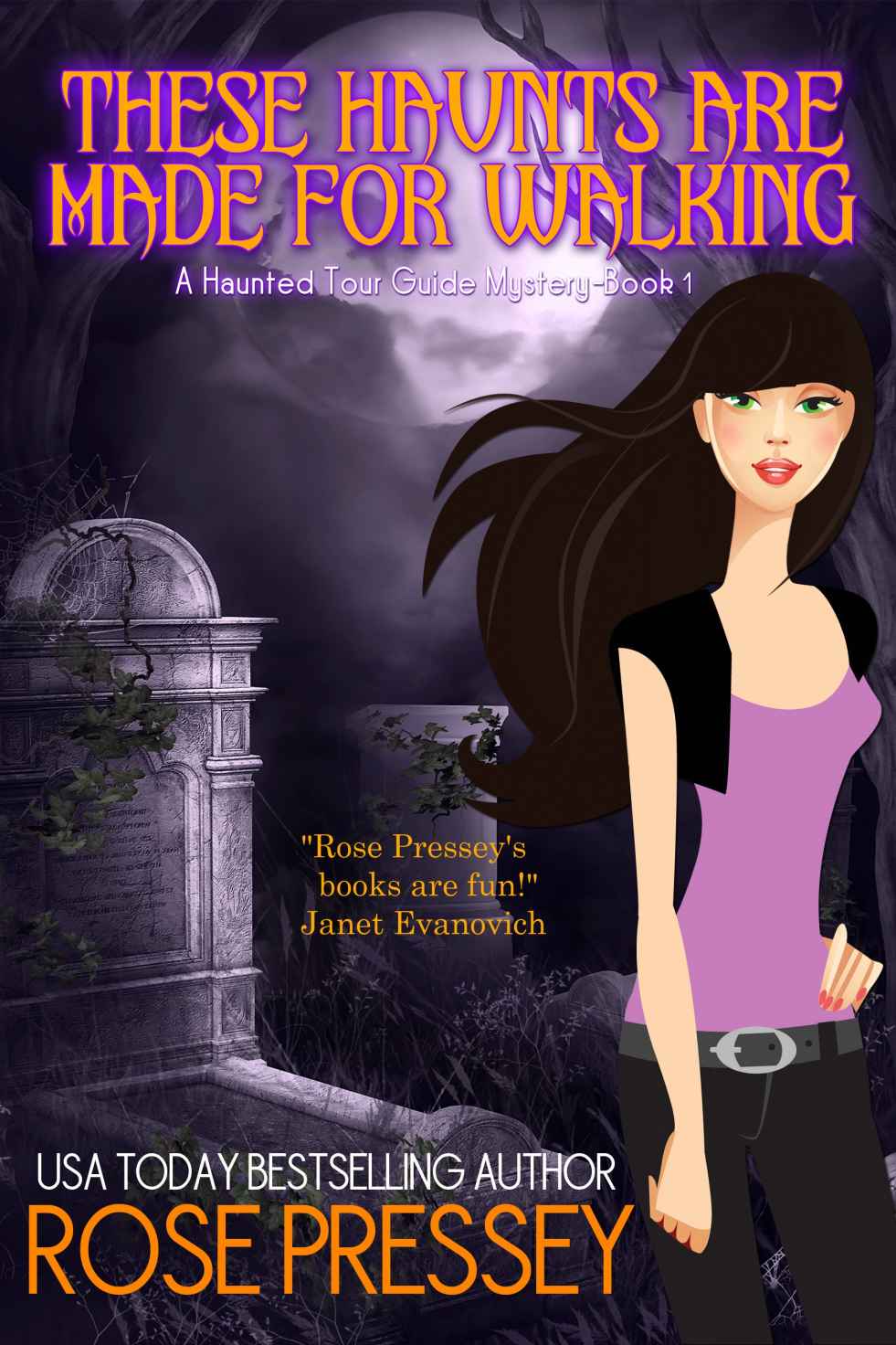 These Haunts Are Made For Walking
Rose Pressey
"Rose Pressey’s book are fun!” Janet Evanovich
Praise for Me and My Ghoulfriends by Rose Pressey

“Her characters are alive and full of quick witted charm and will make you laugh. The plot twists keep you turning the pages non-stop.”
ParaNormalRomance

“I absolutely loved this book! It had me chuckling from the beginning.”
Fallen Angel Reviews

Book –
Murder is a Beach

The Larue Donovan Series:
Book 1 –
Me and My Ghoulfriends
Book 2 –
Ghouls Night Out
Book 3 –
The Ghoul Next Door

The Mystic Café Series:
Book 1 –
No Shoes, No Shirt, No Spells
Book 2 –
Pies and Potions

All rig
hts reserved, including the right to reproduce this book or portions thereof in any form, (electronic, mechanical, photocopying, recording, or otherwise) without the prior written permission of the copyright owner.
This book is a work of fiction. The names, characters, incidents, places, and brands are the product of the author’s imagination and not to be construed as real. The author acknowledges the trademarked status and trademark owners of various products referenced in this work of fiction, which have been used without permission. The publication/use of these trademarks is not authorized, associated with, or sponsored by the trademark owners.
Dedication
This is to you and you know who you are.
Acknowledgements
To my son, who brings me joy every single day. To my mother, who introduced me to the love of books. To my husband, who encourages me and always has faith in me. A huge thank you to my editor, Eleanor Boyall. And to the readers who make writing fun.

If ever a whole town could be haunted, Devil's Moon, Kentucky would be that town. Ripley Van Raden, or Rip as her friends call her, has come back to her hometown to start her own business: a ghost tour. That’s not her only career path though. Librarian by day, and ghost tour guide by night, Rip is ready to take on the ghosts following her around and the mysterious residents who show up for more than the tour in the Devil’s Moon Cemetery.

Her first day on the job as librarian, Ripley finds a dead body and a ghost who can only communicate through electronics. Who knew ghosts could send text messages? To make things even more complicated, Ripley meets a hot cop who happens to also be a ghost hunter. She doesn’t know if Brannon Landon is interested in helping her or just around for the paranormal activity.

When Rip discovers threatening notes between the pages of a novel, she must solve the library patron’s mysterious death before she unwillingly joins the other side of her haunted tour.

I told myself that the shadow seen out of the corner of my eye was just the wind stirring the tree branches. But in reality it was probably a spirit.

Darkness had settled like a thick blanket over the town of Devil’s Moon. Such an appropriate name for a town full of spirits. Our town had ghosts, but it could be argued that we had more than our share.

In the distance the low rattle of thunder let us know the storm was inching its way toward us. Fallen leaves danced in the wind around our feet.

I was leading a small group of people on the town’s only haunted tour. My name is Ripley Van Raden, but everyone calls me Rip. Or R.I.P. How convenient that I was the one and only tour guide for the walking tour and my nickname matched the part.

The friendly gathering of people had followed me as I guided them from one haunted location to the other. Now we’d reached one of the more spooky locations on my tour.

“Does this this place really have ghosts?” a dark-haired girl wearing a Devil’s Moon High School jacket asked. That was my alma mater, but it had been fifteen years since graduation.  The girl held her flashlight under her chin, casting a glow on her face and making the braces on her teeth gleam.

“Yes, it is haunted,” I said with a serious face.

The rest of the group laughed at the girl’s clowning around. “Amber, don’t distract the lady.” I assumed the woman speaking was Amber’s mother since they looked just alike.

My group consisted of ten people tonight. The mother and daughter, two couples who looked as if it was double-date night, and a group of three women and two men. I had handed out flashlights when the tour started. The lights weren’t to add to the spookiness—no, they were so I didn’t have to help someone with a twisted ankle. Every time I did the tour I prayed no one fell because they couldn’t see where they were walking.

“The Travel Channel listed this as one of the most haunted places in America.” I gestured toward the old stone building.

With widened eyes, my audience followed the direction of my pointing finger. The walls of the building were thirty inches thick and black iron bars covered the small windows. A wooden stockade where they used to keep prisoners stood on the front lawn.

“This is the old city jail, which is rumored to be haunted by the former jailer from the early 1800s. Apparitions, whispers, footsteps and cold spots have been reported throughout the building,” I said.

The group stood in silence for a moment as they absorbed the scene, then I started down the sidewalk again with the crowd following my lead. As I made my way around the building, the group continued to shadow me closely, like ducklings following the mother duck. Behind the old jail was a graveyard that dated back to the 1700s. The tall iron gate looked as if it would collapse soon, but no matter the wind, it wasn’t going anywhere.

“A spirit of a man is often seen roaming the grounds. His silhouette appears as a misty blue form,” I said.

A woman clung to her date’s arm. Her eyes widened as I continued my story. If the blue man appeared tonight she’d probably pee her pants and run away.

As I finished the tour, I said, “We are the second oldest graveyard in Kentucky. If you’d like we can walk back over to the entrance.”

I guided the group across the grass to the stone path that led back to the entrance, making sure I counted as many people as I’d started the evening with. Sometimes it was hard to keep track of everyone, but I didn’t want to leave anyone behind in the cemetery. Although I couldn’t be held responsible if they decided to hang around.

We continued toward the entrance and, I said, “Thank you for joining me tonight on the Devil’s Moon Haunted Tour. I hope you enjoyed the trip and please join me again.”

The group had already started walking much faster than me, so I didn’t even try to catch them. Apparently now that the tour was over they were ready to get out of there.

As they were walking away, I added, “Oh, and tell your friends!”

As soon as the crowd dispersed, I would head toward the tavern next door, but first I would hang around and make sure everyone got out of there. My best friend Tammy White had a cold drink waiting for me… bottled water. The last thing I needed after walking around all night was bourbon.

The tour goers had no problem taking off and leaving me alone in the cemetery. I guessed they thought I was used to it, and they were right—I was accustomed to being alone there, though it still had that creepiness factor. Hey, I was only human, and I did get scared the same as anyone.

Heading toward the graveyard’s gated entrance, I weaved through the maze of old headstones; all of them seemed to emit a dark and gothic presence. Clouds drifted faster now in from the west and a breeze stirred the drooping oak branches, a harbinger of the coming storm. All this setting needed was wispy fog rolling across the ground and a sleek black cat and it would be a scene straight out of a cheesy Halloween movie. With me as the victim.

My imagination wandered back to the time when the graves had been dug by the glow of a lantern. Shining my flashlight on a tombstone, I squatted down to read the inscription for the late Corabeth. The last name had faded away.

The hair prickled on the back of my neck. I glanced around, but didn’t see anyone. Focusing on the grave again, I studied the intricately engraved depiction. A rose covered the top portion of the gravestone and underneath it read:
Once your eyes have been opened, you can’t un-know or un-see.

Well, I knew that to be a fact after witnessing my ex-fiancé and my ex-best friend doing the mattress tango on my queen-sized bed. That image would forever be etched in my brain. But that was a story for another time. With a shudder, I stood and brushed the grass from my pants, shaking off the creepy sensation.

Strong fingers grasped my shoulder and I spun around, making a noise that sounded like a cross between a frightened Chihuahua and a two-month-old baby. My arms flailed and I knocked a purse straight out of a woman’s hand. She clutched her chest, screeched, and we both watched her purse plummet to the ground. I made a vain attempt to catch it, but my end-of-the-day reflexes weren’t up to the task.

The older woman wore an old-fashioned dark brown dress that matched the color of her updo hairstyle. Her mouth hung open and her eyes were the size of pie pans.

In a shaky voice, she said, “Look what you did.” She pointed toward the stray pieces of paper, pennies, and tiny glass bottles scattered across the grass. Odd contents for her purse, but Mrs. Clatterbuck was a peculiar character.

If that was how the rest of my evening was going to play out, it was time that I crawled into bed and covered my head with the blankets. My grandma sure was right when she said every path had some puddles. But why didn’t I have galoshes?

Heat formed in my cheeks. “I’m sorry. I didn’t hear you come up behind me.” Who sneaked up on a girl in a graveyard anyway?