Read These Things About Us Online

These Things About Us 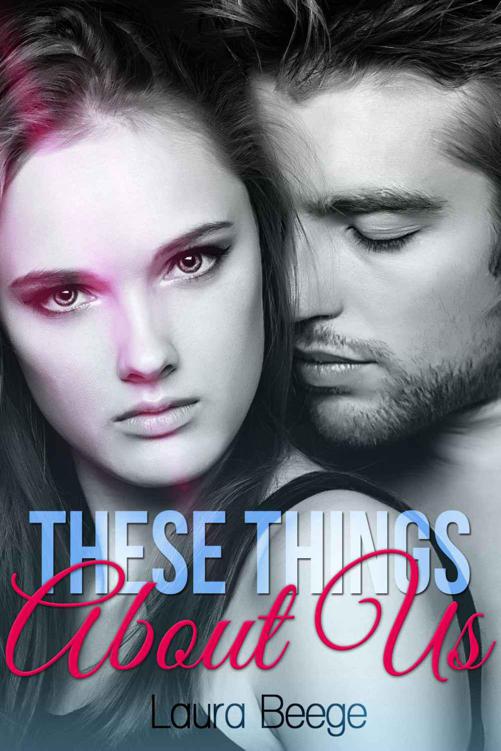 These Things About Us
A Novel
By Laura Beege

All rights reserved. No part of this book may be reproduced or transmitted in any form without written permission of the author, except by a reviewer who may quote brief passages for review purposes only.

If you’re reading this book and did not purchase it, or it was not purchased for your use only, then it is most likely a pirated/stolen copy. Please return and purchase your own copy. Thank you for respecting the author.

This book is a work of fiction and any resemblance to any person, living or dead, or any place, events or occurrences, is purely coincidental. The characters and story lines are created from the author’s imagination or are used fictitiously.

The Fell Types are digitally reproduced by Igino Marini.
http://www.iginomarini.com

I never thought a place called The Dirty Dungeon would be my last glimmer of hope. I never thought I’d end up somewhere in London with no destination either. But my trail had gone cold. My mother’s former neighbors had told me that she had remarried and moved to this neighborhood. It just turned out this neighborhood was big and ugly and I’d never find her without further information. I couldn’t just ring every doorbell and ask for Theresa Lawrence.

From the outside The Dirty Dungeon looked exactly like what its name promised. The windows were darkened, a faint yellow light glowed above the door and even the prospect of going in there twisted my stomach into knots. But a shabby old sign read
accommodations.
If they had rooms, they surely had a phone I could use and more importantly, a phone book.

I tightened my grip on the suitcase handle. I was here to get a normal life. Leave that old, wrecked one behind. Going into a pub wouldn’t mess that plan up. It wasn’t like I was going to get drunk and dance on the bar.
I would just call my mom.

I pulled my tattered turquoise suitcase through the door into a loud, small bar that smelled bitter like beer and wood and salty like something to eat. My stomach grumbled at the idea of food. I wasn’t here to eat, though.
I had half of a sandwich waiting for me in my backpack.

Most tables were taken and the air buzzed with people chatting and laughing as I approached the bar.
There were two men behind the bar, undeniably related with their square chins. One looked like your average late 40s guy with greying hair and a loose blue shirt.
The other was a blond train wreck. It was impossible not to stare at the rows of rings through his earlobe, the giant spider tattoo on his neck and that spiked leather cuff. He leaned on the bar, talking to a black-haired girl who looked like she popped out of the TV straight into real life.
Her skin was smooth, her dress hugged her curves perfectly and I would have killed to know her secret to keeping the frizz at bay.
It wasn’t hard to decode her leaning forward, her open-mouth smile and that hair-twirling, though. Someone was looking for attention and got it.

“What can I get you?”
The older bartender stopped to get my order and his smile wavered just a little when he looked at me.

I couldn’t look great after a day of running through London.
Plus, I had the appearance of a fifteen-year-old.
I didn’t fit in with the usual customers – which seemed to consist mostly of guys wearing leather and either Mohawks or mullets.

“Hi, uhm…” I breathed and ran my fingers through my curls. Best to get it all out there as quickly as possible. “My phone died and I really need to call someone, but I don’t know their number. Do you happen to have a payphone and phone book?”

“Of course, Darling.” He pointed to a corner at the far end of the bar. An old payphone hung at the wall and a man clutched the speaker and yelled into it. In French. “That’s Jean. He should be done in a few minutes, after his wife hangs up on him and he calls her again to apologize.” The bartender scratched the dark beard that framed his mouth. “Can I get you anything while you’re waiting?”

I inhaled and took a look at the board over his head.
They mostly served alcohol. Only few other drinks were listed.
Then there were a couple of desserts that sounded like sugary heaven and a few more dishes that either sounded plain disgusting or didn’t sound at all like anything I knew.

Again, my stomach growled. I grimaced and dug into my pocket for the coins I’d pushed into it earlier.
That money was supposed to feed me through tomorrow, too, but I could hardly come into a bar and ask to only use the phone.
I spread the coins on the counter and tried to count the foreign money.

“Is there any way I can get a really, really small portion of those potato wedges?”

“What are you drinking?” the bartender sighed.

“Oh, uhm, just water from the tap, please.” I scratched the back of my neck. He’d throw me out any second. Nobody wanted a broke girl in their bar. A girl who demanded the only free drink.

“Put the money away, girl.”

“No, look, I can pay for a coke but then no potato wedges. This is enough for a coke. Don’t throw me out, please.”

I scrubbed the coins together and pushed them back into my jeans. I’d find some other place. Just because I couldn’t find a pay phone with a phone book, didn’t mean I couldn’t find another pub. Preferably one with a bartender who didn’t kick me out.

I stole another glance at Jean, who still argued with his wife, and only swiveled back around to the bartender when a glass clicked against the wood of the counter. It was filled with coke.

“What, but… No, I can’t. Seriously, I don’t need a pity drink.” I slid the glass back across the bar.

“Well, Tony, it’s common in The Dirty Dungeon that first time customers get a drink and a meal for free.
So, potato wedges?”

I brushed my sweaty palms against my pants. I shouldn’t take him up on that special offer. It was obviously so not common. His soft brown eyes and the encouraging smile made it hard to say no, though. I bet very few people said no to this guy. And I bet I would need all the money I had if I didn’t find my mother soon.

Again, I couldn’t say no, so I climbed onto a bar stool and folded my hands between my knees. I earned an approving smile from the bartender.

He looked over to the train wreck bartender, as he got out a grey plate. “Trace, stop seducing our customers and grab me the phone book from the office.”

Trace didn’t stop flirting, he just frowned at my bartender then turned back to the girl who was patiently waiting for his attention.
I didn’t want to stare. I didn’t want to be more impolite than I already was, getting free food and having someone ordered around for my benefit, but my eyes were glued to this guy.

A vein in Trace’s neck popped, but he didn’t protest and wrapped up his little talk with a short kiss on the lips from the girl.
He then quickly disappeared through a door, presumably to get the phone book.

“Here you go, Darling. I'm Alex, by the way, you just call if you need anything, okay?” A pile of steaming hot potato wedges sat on the plate in front of me, two little pots of dip on each side of the potato mountain. It smelled delicious.

I hadn't realized just how much I wanted to eat something that didn't taste like cardboard. Something that would warm me from within and keep me fed for more than just an hour or two.

Alex returned to his other customers and I dived into my food.
It wasn't fancy, but it was heaven with the first bite.
I mentally slapped myself for almost turning down his offer to give me free food. However, unconditionally getting taken care of was strange.
I would have to repay him once I found a place to stay, preferably my mother's house, and a job.

“Is this for you?” A raspy voice asked.

I looked up to find Trace holding a thick phone book, cocking a pierced eyebrow at me.

I nodded, my tongue busy with food. Trace's green eyes travelled over my face. Every inch of it. From my forehead to my eyes, down my nose, over my lips to my chin. I felt like an animal in the zoo. Hot blood rushed up my neck, setting my ears on fire.

He made a suffocated noise in the back of his throat, curled his lip and dropped the phone book onto the counter, then turning swiftly, he high-tailed for the back room again.

I disgusted him. I had never met this guy, but he only had to take one look at me and it made him bolt. I wanted to fish my hat out of my suitcase and pull it down over my face.

Weren't people with tattoos and piercings supposed to be open-minded and not into the whole super skinny, extra long legs and perfect face crap? If I made a complete stranger bolt, how could I expect to make another complete stranger take me in? Just because she was responsible for half of my DNA didn't mean she had to help me.

I tried to erase his gagging noise from my mind the second Jean headed for a corner table. I grabbed the book and dashed for the phone. My mother was not going to find me disgusting. She might not be overly happy, but she was not going to make a sound like she was going to throw up.

I thumbed my way through the book until I found the Ls. Her former neighbors had told me that she moved away after marrying some Aaron Lawrence. Really, how many Aaron and Theresa Lawrences could there be in London?

Way too many.
Calling all of them was going to cost me a lot.
I swallowed, pushed some coins into the phone and dialed the first number.

A man, presumably called Aaron, answered and when I said I was looking for a Theresa Lawrence, he said there was no Theresa at this number. The chance for the first number to be the right one was basically nonexistent, right?
So I dialed the next and the next Aaron until I came to the Theresas.

I swallowed. That voice, that light-hearted voice might belong to my mother. The woman whose picture I carried around in my pocket.

“Hi,” I mumbled, scratching my temple.
“Uhm, I'm looking for a Theresa who lived in Tucson, Arizona, in the early to mid 90s.”

“Good luck.” She sounded sincere. As if through the phone line, through the two sentences we spoke she could detect my growing desperation, and I wished my mother sounded like that.

I hung up and dialed the next three numbers. One wasn't available at the time, one was a Theresa who had lived in France in the 90s and loved talking about the great wine there. The last one picked up, and I heard the click and then silence. A TV was running in the background.

“Good evening,” a little girl answered. “Are you the tooth fairy?”

Great. The last number belonged to a little girl. Who on earth got their child – who still believed in the tooth fairy – an own phone number?

“Is your mom called Theresa, too, by any chance?”