Read They Spread Their Wings Online

They Spread Their Wings 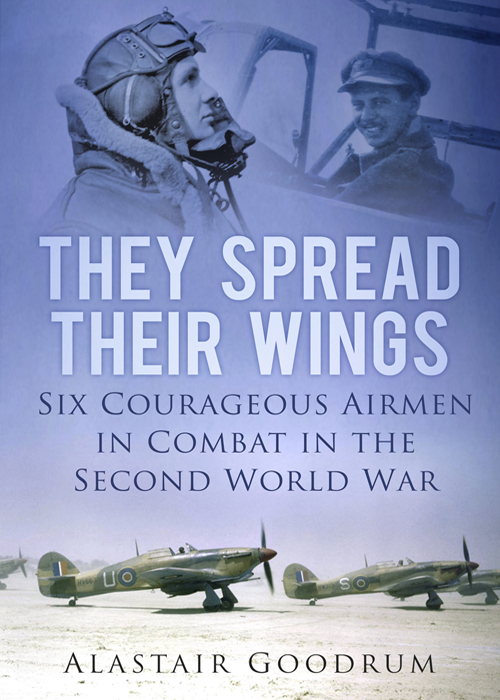 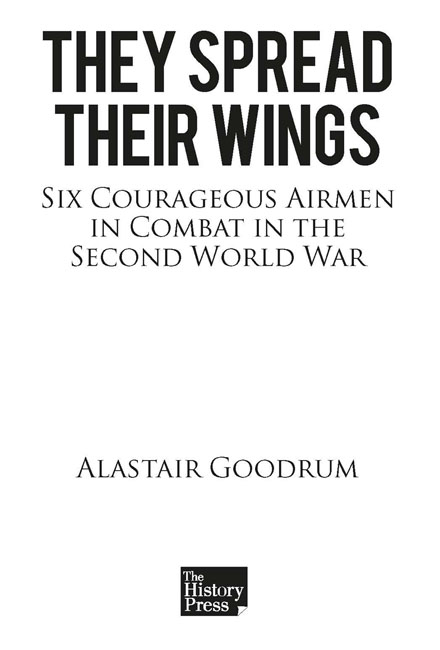 6   Guest of the Gestapo

Previous Books by Alastair Goodrum Published by the History Press:

I wish to thank the following people for their kindness and generosity in permitting me to access and use written and photographic material from their archives and for their personal reminiscences about the airmen in this book:

Peter Brett, for memories of his time flying the Hawker Typhoon operationally during the Second World War.

Mrs Barbara Crampton and her daughter Rachel, relating to Jim Crampton. Thanks also to Ted Crampton for memories of his brother Jim.

Arthur Edgley, for allowing me to visit and chat about his experiences during his time in the RAF and as a POW; Jonathan Falconer for permission to use material about Arthur from his book
Stirling Wings
; and John Reid for his help with all things Stirling and for photographs relating to Arthur’s story.

Mrs Sybil Summerson, widow of Sqn Ldr Alan Summerson, for detailed information about her husband’s long career in the RAF; John Summerson for material relating to his brother, Alan; John Evans and the Pembroke Dock Sunderland Trust for particular help relating to Alan Summerson’s service in Sunderland Flying Boats; and Peter Gosling for material from his article about Alan, published in
Air Enthusiast
in September/October 2004.

John Rowe and his wife Susan, daughter of Wg Cdr Walter Dring, for detailed information and images relating to her father’s distinguished career; and Peter Dring for personal recollections of his cousin Walter.

I would also like to acknowledge the help given by the editor and staff of the
Lincolnshire Free Press
and
Spalding Guardian
for local newspaper archive material; the president and council of Spalding Gentlemen’s Society for the use of museum archive material relating to local airmen; Andy Thomas, Peter Green, Ken Ellis and Dale Parker (
www.aquatax.ca
) for aircraft images from their collections; and finally Amy Rigg with Abigail Wood and the team at The History Press, who have helped me to bring this project to fruition.

What turns an ordinary man into an extraordinary one? Read this collection of the exploits of six airmen caught up in extraordinary personal and operational circumstances during the Second World War and you will soon discover the answer.

These unassuming chaps, people you might rub shoulders with anywhere in the land, were once – a lifetime ago – the backbone of the Royal Air Force and they represent the thousands who volunteered for aircrew during the Second World War. All were young men; most still in their teens when they volunteered. Many cast off school uniform one day and put on Air Force Blue the next, taking a step into the unknown; yes, it was an adventure, but one with a hugely tempting prospect – the opportunity to
fly
.

What follows are the emotional, action-packed journeys of six airmen through flying training in England or Canada, then war in the air campaigns over Europe, the Middle East and the Far East. We meet and accompany each character through his early family life. We relive with him the nervous anticipation of joining up, then going solo in the air for the first time; the patient hours of training; the pride of gaining those coveted ‘Wings’; the excitement of that first operational posting and becoming part of a close-knit team. Then we wait impatiently with our men before feeling the adrenaline rush of their first sortie over enemy territory, waiting and wondering what the next ‘op’ might bring. That is not the end of the story, though; it’s only a beginning, as some are shot down in enemy territory and those that survive experience hardship and adventures they could never have imagined.

Without doubt such men would dismiss accolades of ‘hero’ or ‘extraordinary’ out of hand and say with a shrug, ‘We just did what we had to do.’ Viewed from a distance of seventy years, however, these brushes with death, actions under enemy fire, dangers from wounds and injury, perils of escape and evasion in occupied territory, and privations of life in POW camps, will be judged by any measure as hair-raising adventures denied to most of us in modern times. As in any adventure involving armed conflict, it turned adolescents into men, some of whom returned safely while others paid the ultimate price. All are remembered with affection and pride through the stories that follow.

Alfred Howard Mayhew Clark – known to his family and friends as Howard – was born in the Lincolnshire village of Moulton Eaugate, near Spalding, on 31 March 1922 into a long-established farming family. He was a farmer’s son who wanted to become a racing driver, but due to the turbulent times in which he grew up, he became a fighter pilot instead.

Howard’s first taste of the wider world came in 1930 as a boarder at Ashdown House Preparatory School in Sussex, where he soon displayed a competitive spirit both in the classroom and on the sports field. His letters home show how proud he was of his achievements in class and how he was already keen on cricket, football and athletics. Pupils at Ashdown were encouraged to write letters and it is due to the enthusiasm with which Howard took to this task that, by continuing to do so into adult life, such a comprehensive picture of his life has come to light – and indeed it has to be said that his parents and family reciprocated this keenness.

In July 1931, for example, he wrote about Sports Day: ‘I am going in for the 100 yards (under ten), four-legged race, sack race, long jump, egg & spoon (under ten), and 200 yards (under ten); so I am going in for quite a lot.’ The year 1934 saw Howard moving on to The Knoll, a boarding school in Woburn Sands, Bedfordshire. Here he developed an interest in hockey and earned himself a place in the school team. In February 1935 his competitive spirit was much in evidence when he wrote home: ‘We have had some good games of hockey this last week. On Monday I shoot one goal, Friday: three and Saturday: one.’ In June that year he was in the cricket team and wrote anxiously to ensure his parents visited when he was playing a match. 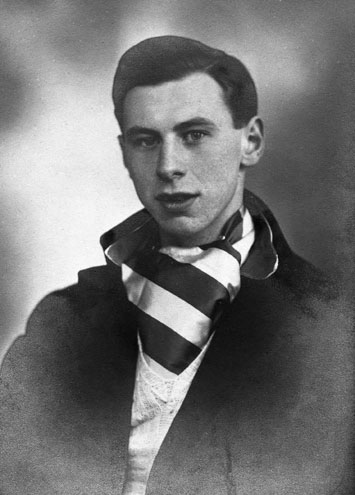 Aged 14 now, in September 1936 Howard went to Uppingham Public School where he joined West Deyne boarding house, the house in which his father, Capt A.H. Clark, had been taught back in 1907. Howard’s younger brother, Bertram, also joined the same house a few years later and his nephew, Howard, continued the family tradition in 1969. Sport still featured much in Howard’s letters home; in 1936 he was playing rugby – and scoring tries – and by 1940 it was clear he was a good all-round athlete and team sport player. In June of that year he was runner-up in the school sports championship – winning the Guthridge Cup for the quarter-mile – and was awarded his hockey colours. His letters also show his resolve to do well in his School Certificate exams and an awareness of the current war situation, not least due to air raids in the local area and economy measures imposed at the school: ‘We don’t have to wear straw hats any longer because they can’t get any more straw to make new ones from, and we only get five ounces of sugar a week and it doesn’t last long,’ he wrote.

In an undated letter, written to his parents during May 1940, comes the first indication of Howard’s interest in joining the armed forces: ‘I enclose a cutting from yesterday’s
Times
about the RAF. They want people from 18 to 28, as you will see, for pilots.’ It seems that in his characteristically decisive way Howard had made up his mind what he should do and got on with it, for in his next letter he wrote:

I passed my interview into the Air Force last Monday. The bloke (a Flight Lieutenant) recommended me for a pilot or an observer, which are the two best things that you can get, because to be either of these you are an officer. He asked lots of questions and filled in lots of forms … and I have a thing signed by him exempting me from any selection boards and things … all I have to do now is pass the medical examination. Well, I hope that School Cert isn’t too difficult. It doesn’t matter about having it for the RAF but they like you to have passed in maths with a credit if possible, which I think I can do.

Thus Howard Clark, his exams behind him, left Uppingham School during that summer of 1940 to join the RAF with an ambition to fly fighters. There is a gap in his letters between June and December 1940 but this is most likely due to him killing time at the family home awaiting, like thousands of his contemporaries, the call to report for duty. That call came in December 1940, when Howard was ordered to report to No 3 Recruit Centre at RAF Padgate – through whose notorious portals many were to enter and have their rough edges rubbed off! Howard emerged from Padgate as No 1125783 AC2 A.H.M. Clark and began the long and tortuous journey along the path to becoming a fighter pilot. His first few months’ service, rubbing shoulders with every type of the nation’s youth and every type of RAF drill instructor, came as something of a shake-up to him, but no doubt this would have resonated with all those who went before him and those afterwards.

His first move after Padgate was to No 9 Receiving Wing (RW) at Stratford-upon-Avon. The main purpose of RWs was to provide a pool of manpower with which to feed the Initial Training Wings (ITW), which were the starting points for aircrew training. Here he was allocated to No 3 Flight, No 2 Section and by 22 December was housed in the appropriately named Shakespeare Hotel. He wrote home:

It is a pretty awful place and hundreds of folks are here, not many of them stay here. I expect that it will get better as we move on. I don’t look like having a very good Christmas! The food is better than at Padgate but the worst of it is that you have to queue up for it for so long before you get it.

Mystic Memories by Gillian Doyle, Susan Leslie Liepitz
Marisa Chenery by A Warrior to Love
Full House by Carol Lynne
The Clowns of God by Morris West
Murder as a Second Language by Joan Hess
That Night in Lagos by Vered Ehsani
Casper the Commuting Cat: The True Story of the Cat Who Rode the Bus and Stole Our Hearts by Susan Finden, Linda Watson-Brown
More Than Lies by N. E. Henderson
Project X by Jim Shepard
Cold Cereal (The Cold Cereal Saga) by Adam Rex
Our partner