Read Things My Girlfriend and I Have Argued About Online

Things My Girlfriend and I Have Argued About 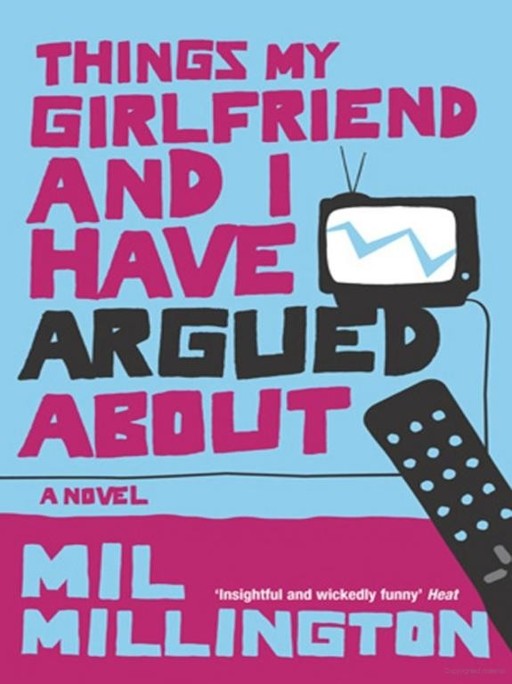 Annotation
This is an extremely funny online book, which talks about differences between a man and a woman. The author also has a paper book with the same title, but
nothing
in the book has ever appeared online, so they are completely different.
Mil Millington
Things my girlfriend and I have argued about
(online version)
Margret

Nothing keeps a relationship on its toes so much as lively debate. Fortunate, then, that my girlfriend and I agree on absolutely nothing. At all.

Combine utter, polar disagreement on everything, ever, with the fact that I am a text-book Only Child, and she is a violent psychopath, and we're warming up. Then factor in my being English while she is German, which not only makes each one of us personally and absolutely responsible for the history, and the social and cultural mores of our respective countries, but also opens up a whole field of sub-arguments grounded in grammatical and semantic disputes and, well, just try saying
anything
and walking away.

Examples? Okey-dokey. We have argued about:
1
The way one should cut a Kiwi Fruit in half (along its length or across the middle).

2
Leaving the kitchen door open (three times a day that one, minimum).

3
The best way to hang up washing.

4
Those little toothpaste speckles you make when you brush your teeth in front of the mirror.

5
I eat two-fingered Kit-Kats like I'd eat any other chocolate bars of that size, i.e., without feeling the need to snap them into two individual fingers first. Margret accused me of doing this, 'deliberately to annoy her'.
6
Which way – the distances were identical – to drive round a circular bypass (this resulted in her kicking me in the head from the back seat as I drove along).
7
The amount of time I spend on the computer. (OK, fair enough.)

8
First Born's name (Jonathan). Then, when that was settled…

9
How to
pronounce
First Born's name.

11
Which type of iron to buy (price wasn't an issue, it was the
principle
, damnit).

12
Where to sit in the cinema. On those occasions when we a) manage to agree to go to the cinema together and, b) go to see the same film once we're there. (No, really).
13
Whether her cutting our son's hair comes under 'money-saving skill' or 'therapy in the making'.

14
Shortly after every single time Margret touches my computer, for any reason whatsoever, I have to spend twenty minutes trying to fix crashes, locked systems, data loses, jammed drives, bizarre re-configurations and things stuck in the keyboard. There then follows a free and frank exchange of views with, in my corner, 'It's your fault,' and, in hers, 'It's a curious statistical anomaly.'
15
Margret enters the room. The television is showing
Baywatch
. Margret says, 'Uh-huh, you're watching
Baywatch
again.' I say, 'I'm not watching, it's
just on
.' Repeat. For the duration of the programme.
16
She wants to paint the living room yellow. I have not the words.

17
Margret doesn't like to watch films on the TV. No, hold on – let me make sure you've got the inflection here: Margret doesn't like to
watch
films on the TV. She
says
she does, but years of bitter experience have proven that what she actually wants is to sit by me
while I narrate the entire bleeding film to her
. 'Who's she?', 'Why did he get shot?', 'I thought that one was on their side?', 'Is that a bomb' – 'JUST WATCH IT! IN THE NAME OF GOD,
JUST WATCH IT
!' The hellish mirror-image of this is when she furnishes me, deaf to my pleading, with
her
commentary. Chair-clawing suspense being assaulted mercilessly from behind by such interjections as, 'Hey! Look! They're the cushions
we've
got.', 'Isn't she the one who does that tampon advert?' and, on one famous occasion, 'Oh, I've seen this – he gets killed at the end.'
18
Margret thinks I'm vain because… I use a mirror when I shave. During this argument in the bathroom – our fourth most popular location for arguments, it will delight and charm you to learn – Margret proved that shaving with a mirror could only be seen as
outrageous
narcissism by saying, 'None of the other men I've been with,' (my, but it's all I can do to stop myself hugging her when she begins sentences like that) 'None of the other men I've been with used a mirror to shave.'
'Ha! Difficult to check up on that, isn't it? As all the other men you've been with can now only communicate by blinking their eyes!' I said. Much later. When Margret had left the house.
19
The TV Remote
. It is only by epic self-discipline on both our parts that we don't argue about the TV Remote to the exclusion of all else. It does the TV Remote a disservice to suggest that it is only the cause of four types of argument, but space, you will understand, is limited so I must concentrate on the main ones.
1) Ownership of the TV Remote: this is signified by its being on the arm of the chair/sofa closest to you – it is more important than life itself.
2) On those blood-freezing occasions when you look up from your seat to discover that
the TV Remote is still lying on top of the TV
, then one of you must retrieve it; who shall it be? And how will this affect (1)?
3) Disappearance of the TV Remote. Precisely who had it last will be hotly disputed, witnesses may be called. Things can turn very nasty indeed when the person who isn't looking for it is revealed to be unknowingly sitting on it.
4) The TV Remote is a natural nomad and sometimes, may the Lord protect us, it goes missing for whole days. During these dark times, someone must actually, in an entirely literal sense, get up to change the channel; International Law decrees that this, «will not be the person who did it last» – but can this be ascertained? Without the police becoming involved?
20
We're staying at a German friend's flat in Berlin and he brings out the photo album, as people do when conversational desperation has set in. It's largely pictures of a holiday he went on with Margret and a few friends several years previously. And consists pretty much entirely of shots of Margret naked. 'Hah! So, here's another photo of your girlfriend nude! Good breasts, no?' I sat on the sofa for hours of this – I think I actually bit through my tongue at one point. Fortunately, though, everything turned out all right because Margret, me and one careful and considered exchange of views revealed it was, '…just (
my
) hang-up.' Great. I'm
sooooo
English, apparently.
21
See if you can spot the difference between these two statements:
(a) «
Those trousers
make your backside look fat.»
(b) «You're a repellently obese old hag upon whom I am compelled to heap insults and derision – depressingly far removed from the, 'stupid, squeaky, pocket-sized English women,' who make up my vast catalogue of former lovers and to whom I might as well return right now as I hate everything about you.»

Maybe the acoustics were really bad in the dining room, or something.
22
She keeps making me carry tampons around – 'Here, have these, just in case.'
'Oooooooh, why can't
you
carry them?'
'I've got no pockets.'
Then, of course, I forget about them. And the next time I'm meeting The Duchess of Kent or someone I pull a handkerchief out of my pocket and shower feminine hygiene products everywhere.
23
She really over-reacts whenever she catches me wearing her underwear.

24
Now, what you have to realise is that this was from nowhere, OK? Don't think there were previous conversations or situations that put this in context. Oh no. Just imagine the, 'What the
f
…?' moment you'd have been standing in if
your
partner had said this to you, because you'd have had as much preparation as I did. So, it's just after Christmas and Margret's moaning about her present (I forget what it was, a Ferrari, I think – but in the wrong colour or something), um, actually, let me come back to this, that reminds me…
25
Presents. Before every birthday, Christmas or whatever I'll say, 'What do you want?' And Margret will say, 'Surprise me.' And I'll reply, 'Noooooo, just tell me what you want. If I guess it'll be the wrong thing, it's
always
the wrong thing.' And then she'll come out with that, 'No, it won't. It'll be what you chose, and a surprise, that's what's important,' nonsense. And I'll say, 'Sweetest, you say that
now
, but come Christmas morning it'll be, "What the hell were you thinking?" again, won't it?' And she replies, 'No. It. Won't.' And I say, 'Yes, it will.' And she says, 'Don't patronise
me
.' And the neighbours freeze in their seats for a moment next door, before jumping up and removing anything they have on the shelves on the adjoining wall. And, in the end, Margret gets her way. And I hunt around in utter desperation for two months for something before finally finding the one item that will work at 7.30pm on Christmas Eve for a cost of twenty-three-and-a-half thousands pounds. And on Christmas morning it's, 'What the hell were you thinking?' But anyway.
26
Back at the previous item, it's just after Christmas and Margret's going on about her present, which was, you'll recall, a necklace of a single diamond suspended on a delicate chain of white gold and sapphires. And this is what I hear come out of her mouth – 'Why didn't you get me a wormery,
I dropped enough hints
?' You
what
?