Read This Is How It Happened Online

This Is How It Happened 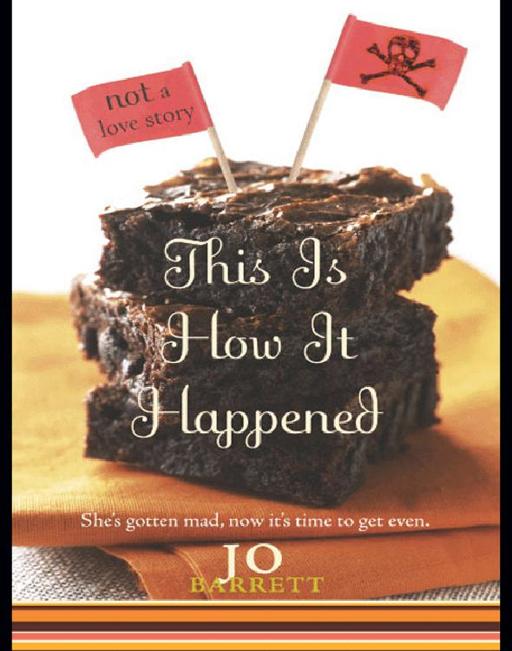 This Is How It Happened

(Not a Love Story)

For my mother, Mary Ann

An ounce of mother is worth a pound of clergy

—
from the Spanish proverb

I never intended to KILL him kill him. I mean,…

The problem was, he was beautiful. When we moved in…

It was my usual Saturday afternoon routine. Have coffee with…

The morning after I slept with Carlton Connors for the…

I bend down and peer at my poison brownies. Poke…

The next evening, after my one-night stand with Carlton Connors,…

I spend the entire night in front of the porcelain…

I never thought that I’d be the type of girl…

I’ve got to get the hell out of Dodge, I…

The Friday after Carlton gave me the Juliet ring, we…

I arrive at The Tavern early, of course. I’m dressed…

After Carlton gave me the Juliet ring, I expected us…

Carbon monoxide, I think. That’s the easy way to go.

Carlton is adamant about not introducing me as his fiancée.

So, how to create a fatal carbon monoxide poisoning? A…

In preparation for the big investor meeting with Carlton’s father,…

Some poisons aren’t all they’re cracked up to be. But…

Wednesday morning rolls around and I’m desperate. I log onto…

My brother calls himself an “addiction specialist.” I’ve seen his…

A week after the big investor meeting, I found the…

Heather has invited me over for the Big Day. The…

When Carlton felt he was in the doghouse, he wooed…

I thought quitting my job with Henry would be hard.

I have a theory. And here it is…

After Carlton and I moved into the new Organics 4…

Michael, that little snitch, called my brother about the carbon…

In the midst of what Carlton and I call our…

I unfold the crinkled napkin from the International House of…

Carlton goes to a bachelor party on Saturday night. And…

I start interviewing other candidates to replace Steve Schultz. And…

“Let’s cut to the chase, here. What do you want…

I work like a dog until midnight. When I walk…

“If you don’t want me to slam his balls in…

I’d been having unprotected sex with Carlton for four…

Dick and I agree not to have contact by phone…

I wasn’t overjoyed about the pregnancy, but I wasn’t sad…

I meet Dick at the coffee shop. Same table. Same…

Cheryl tells me that the pregnancy is Ectopic. That women…

I study my hit man. “Carlton has a road bike…

The week after the abortion, it’s suddenly raining babies. I…

When he was sixteen, my brother drove a carload of…

I put on my pinstriped power suit. “Be strong,” I…

I’m at Starbucks squeezing honey into Dick’s coffee. When I…

I am not a furniture mover. In fact, I suck…

The only thing worse than running into an ex-fiancé is…

My brother is what you’d call an “idea man.” An…

I meet Heather at The Tavern for a quick drink…

My mind twists and turns like a criminal’s. Late at…

I spend day and night working at my computer. Developing…

I post a message to Dick on the Starbucks corkboard.

Heather and I are having a super fabulous afternoon at…

I walk quickly to Starbucks, a crisp, white envelope in…

Deepak calls me on my cell phone. I’ve skipped three…

Every good thing must come to an end, as they…

I leave Starbucks and skip down the street. For the…

Nick passes a large manila envelope across the table.

Michael bursts into the interrogation room, jabs his finger into…

An hour later, I’m in a large holding cell with…

Other Books by Jo Barrett

And the Oscar goes to…

Writing a novel is like the bobsled. You need a brakeman. Carrie Feron, my editor at HarperCollins, along with Tessa Woodward, kept this sled from zipping off the track. As did my literary agent, David Hale Smith, and his assistant, Shauyi.

In my previous novel,
The Men’s Guide to the Women’s Bathroom
, I was remiss in mentioning Regina Lee who was central in bringing the idea of a television show to actor Hugh Jackman and Seed Productions.

Karen Hamilton of Creative Convergence pushed the idea through to CBS Network.

My agent, Ryan Saul, is the living, breathing, finer version of Ari Gold from
Entourage.

For three extraordinary men for whom the world of ideas is not dead: Brian Swier, John Zimmerman, and George Jones, CEO of Borders Books.

For the superb Charlie Pigeon, CEO of Tige Boats.

And let’s not forget the dazzling Cindi Rose, and Dr. Franklin Rose. You add a spark to Houston, Texas, that has been sorely missed.

For my stylish and intriguing friends, Sharin and Scott Gaille, for whom the world itself is too small, and Angola, Dubai, and Russia just a plane ride away.

My lifelong companions: the brilliant and esteemed Lawrence Cunningham—who wields a pen like a blade; and for LL: Heather Phibbs.

For the hip chicks in Austin and Houston who serve as inspiration: Amy and Melissa, Georgia and Paige Ridenhauer, Lynn, Meredith, Laura, Lisa, Courtney, and Whitney Casey. (As far as I know, these women have never hired a hit man…yet.)

Doug Agarwal of Capital Commercial Investments in Austin, Texas, is an important friend, and one of the finest men I know.

To Mike Shea at
Texas Monthly Magazine
for reviving the art of crisp writing.

For Gary Cogill because he gets it.

For the inspirational Ryan Brooks of Goldglove Productions in Los Angeles.

For Dr. Victor Levin and Laurel Westcarth of M.D. Anderson Cancer Center in Houston, Texas, for taking such extraordinary care of my father during his battle with brain cancer. And for Dr. Victor Levin’s continuing friendship.

For my brother, Ronnie Barrett, who is wickedly funny…sometimes.

For Todd Brooks…and the Costa Rican flip flops I fell in love with.

For the Petro family (P.S. This is a long list because they’re Catholic.) Madeline, Mike, the other Mike, Vicki, Nadine, Joe, Paula, Louis, Maria, Richard, Michelle, Bill, and super cool Joe. Am I missing anyone?

And lastly, for my mother. For staying knee-deep in the trenches. Day after day.

Sir, if you were my husband, I’d poison your drink.

Madame, if you were my wife, I would drink it.

I never intended to KILL him kill him. I mean, actually kill him. It started as a joke. Two women in a coffee shop talking about their ex-disasters. And when Carlton’s name came up, the pain was so searing, so literal across my chest, I checked my stomach to see if someone had sliced me open with a knife.

That’s when I told my best friend, Heather, I wanted to kill him.

“I’ll hide the body,” she said, taking a demure little sip from her cappuccino. And we both giggled like schoolgirls. But then she did something she’s never done before. She put her hand on my shoulder and shot me a look. It was one of those pitying looks. The type of look a person gives a wounded dog before the vet puts him down. She even crinkled her eyes and said, “Be strong, Maddy.”

And that’s when I knew I was serious about killing him.

An hour later, after Heather and I parted company, I found myself browsing the gardening section of Half Price Books. I was looking for a book on poisons. And I didn’t want to pay retail.

I felt angry. Angry as a tornado. Wild and swerving and unpredictable. For some reason, maybe anxiety, my eye had begun to twitch. I rubbed my eyelid and skulked up and down the bookstore aisles.

The book I plucked from the shelf had a picture of a rat on the cover. I imagined Carlton’s face attached to the rat’s body. And then, for a split second, I imagined Carlton’s
real
body, and us having sex on the kitchen floor, like we always used to do.

Another wave of anger swept over me and I shook my head back and forth, trying to erase the image from my mind. I was an assassin on a mission, after all.

I flipped open the rat book and began browsing through the pages.

Chapter 4: How to Exterminate those Pesky Pests.

“Making your own poison: The organic alternative,” I read quietly to myself.

Am I really going to kill my ex?
I thought. I blushed and glanced suspiciously up and down the bookstore aisles, as if half expecting a bunch of FBI guys to burst in and arrest me for Intent to Kill with Lavender-Scented Mouse Repellent.

I strolled to the register, casually, book tucked neatly under my arm.

“Cash or charge?” the longhaired clerk asked. He stroked his goatee and peered across the counter at me. I could smell the pungent scent of marijuana emanating from his clothes—particularly the hydroponic “kind-bud” variety preferred by the closet intelligentsia crowd of East Austin.

I winked at Mr. Greenleaf and slid a twenty across the counter. I’d seen enough movies to know I’d definitely be paying cash.

The first rule of killing an ex-fiancé: never leave a paper trail.