Read This Rake of Mine Online

This Rake of Mine 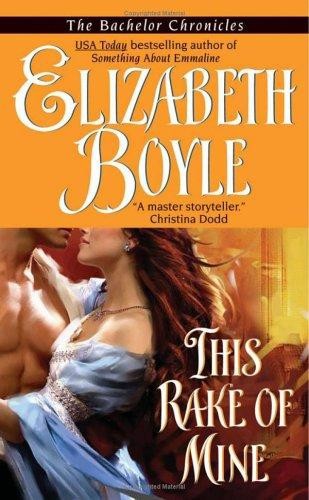 Everything ended with a kiss
…

When the rakehell Lord Jack Tremont kissed Miranda Mabberly, mistaking her for his mistress, neither realized his reckless act would cost Miranda her reputation, her fiancé, and her future. But for Jack, it was a kiss unlike any other.

Years later, hiding incognito far from London—as a teacher at Miss Emery's Establishment for the Education of Genteel Young Ladies—Miranda has made a respectable life for herself, away from the
ton
and the dangerous men who inhabit it. When a penniless, much humbled, though still damnably attractive Jack arrives at the school to escort a rebellious young niece home, Miranda does her best to avoid the rogue, only to end up tumbling into his arms—and reawakening a desire that is anything but proper.

She might want to deny her heart, but Miranda's resolve is no challenge for three schoolgirl matchmakers who know true passion when they spy it. Now they won't rest until their all-too-proper teacher and the reprobate lord discover the love that is their destiny.

All rights reserved. No part of this book may be used or reproduced in any manner whatsoever without written permission, except in the case of brief quotations embodied in critical articles and reviews. For information address Avon Books, an Imprint of HarperCollins Publishers.

HarperCollins® is a registered trademark of HarperCollins Publishers
Inc.
Printed in the U.S.A.

for being a good friend

and an even better sister-in-law.

You are always there to listen,

and your kindness, generosity

and beautiful spirit have brightened my life,

as well as all the lives you touch.

"W
ell." Lady Oxley huffed, "I suppose there are worse things than having some
cit'
s daughter marry into your family, but for the life of me, I can't think of it. Our bloodlines will be tainted by this forever."

The Duchess of Cheverton, seated next to Lady Oxley, couldn't agree more. "I fear for your standing, my dear. I do, indeed."

"If there is some consolation, she did go to Miss Emery's," Lady Oxley conceded, though grudgingly.

"Miss Emery's, you say?" The duchess twisted in her seat and looked at the girl in question, eyeing her from top to bottom, as if she were gauging the quality of a length of silk. "A mite young, wouldn't you say? I daresay she's fresh and innocent."

"Oh, she looks innocent enough," Lady Oxley declared, ignoring the hot glances from the people in the other boxes, who were actually watching the opera. "So there is some hope there. Gads, the trollops these merchants pass off as daughters is just appalling. My greatest fear is that Oxley will marry the chit and discover she's been ruined. Oh, the shame of it."

The word rang through the Oxley box and to everyone around them.

Miss Miranda Mabberly, the object of this scorn and speculation, wished herself a thousand miles away. Her cheeks burned with shame and embarrassment, not so much from her future mother-in-law's loud denouncement but from the fact that her mother and father were willing to sit here and listen to their good name being tossed about in such a ragtag fashion.

She wished right there and then that she was ruined.

Miranda took a deep breath and tried to concentrate on the performance on the boards, not the one Lady Oxley was staging here in her private box. This wasn't the first time the lady had lamented her son's betrothal in public, and it most likely wouldn't be the last.

Still that one word rang in her ears.
Ruined
.

Not completely ruined, Miranda reasoned, for that was hardly proper, and despite Lady Oxley's opinions, she was a proper young lady. Besides, being completely ruined went far beyond her knowledge on such matters.

Her mother nudged her and whispered in her ear, "Gracious, child, smile! You are going to be a countess in a sennight."

Miranda did her best to turn her lips upward, but it was hard to bear, despite the way her mother beamed over the wonderful news.

Why, such a match had exceeded even Mrs. Mabberly's designs for her daughter. But Mr. Mabberly, a
cit
with the fortune of Midas behind him, had thought nothing of procuring for his only child the most lofty of husbands.

Yet no one in all this brokering and maneuvering and social engineering had ever thought to consult Miranda on the subject of marriage.

Her marriage
, she would like to point out to her title-mad parents, Lord Oxley, and the various solicitors, bankers, and the earl's numerous creditors, all of whom were arranging this blessed (and financial) union.

Didn't anyone realize that in all this deal making,
she
was the one who was going to have to marry Oxley? Take his name. Live in his house. And she shuddered to think of the next logical step in this progression—share his bed.

Not that marrying an earl was objectionable, for Miranda had gone to Miss Emery's Establishment for the Education of Genteel Young Ladies and knew her duty to her family and country. But it was marrying
this
earl that Miranda found so objectionable.

Earls were supposed to be elegant and sophisticated. Charming company in any situation. A gentleman at all times, and, well, frankly, more often than not, they should be a little bit heroic.

Was that too much to ask for?

Unfortunately, the Earl of Oxley was none of these things.

Even while his mother bemoaned his lowering match, the earl sat beside his future bride and boasted to anyone who would listen about the pair of "goers" at Tattersall's he'd picked up now that he had a rich little "goer" of his own. Miranda had closed her eyes and snapped her mouth shut to refrain from telling the obtuse man that she thought he was putting the cart before the horse, since they weren't married.
Yet
.

Oh, if only she was a little bit ruined, Miranda thought. Just enough so Oxley would cry off. So she could have a chance to find the man of her dreams. A knight in shining armor, who would love her for more than her fortune. A proper gentleman, who would kiss her gently and lovingly. Make her toes curl inside her slippers and her heart beat fast.

But such a fate seemed well beyond her grasp as the houselights came up and there was her "hero" beside her, leering at her as if she were a combination between a ripe peach and a bucket of gold. He sent her stomach lurching.

She would even have been content to marry a dull sort like Lord Sedgwick, if the man hadn't already been wed to his delightful Emmaline.

If only Lady Sedgwick had been part of their party here at the opera… she would have put Lady Oxley in her place and buoyed Miranda's sagging spirits in that sparkling way of hers.

Instead, she had only Lord Sedgwick's company, and he was quite preoccupied by some problem, given the deep crease in his brow. Even if he hadn't seemed so worried, Miranda knew it was hardly proper to pour her heart out to the staid baron, no matter how exceptional Lady Sedgwick claimed him to be.

So instead, Miranda made a hasty excuse to her mother as the intermission began, ignoring the good woman's protests that she shouldn't leave "poor Oxley" alone and fled the box, looking for someplace to escape to, if only until they darkened the lights again.

What she found was an alcove in the back of the hall, far from the rest of the
ton
, who were parading about the opera, showing off new gowns or gossiping about the latest news.

There in the privacy of that darkened corner, Miranda gave herself over to a very improper spate of tears. She cried until the bell rang for everyone to return to their seats. The humiliation of it all! She was no better than one of the horses down at Tattersall's.

Bloodlines, indeed! Miranda's mother came from a good and noble family—one with a far greater history than anything Lady Oxley could claim. So calling up that proud tradition, Miranda wiped away the evidence of her despair and straightened her shoulders, girding herself for the rest of the evening.

For the rest of her life. But suddenly her life took a very different turn.

"Giselle, my dearest goddess, how glad I am to see you," a man whispered into her ear, taking her by the hand and spinning her around. She flew into his chest, and before she could utter a word, he caught her lips in a searing kiss.

Miranda struggled against the rogue, twisting in his grasp, her hands balling up and pounding at his shoulders. Oh, dear heavens!

Obviously not, for his lips teased and taunted hers, and when she opened her mouth to protest, his tongue swiped across hers, sending the most frightening thrill through her limbs—the kind she could never have imagined.

Why, it made her toes curl up inside her slippers. No wonder most of the
ton
called him Mad Jack Tremont.

For this—this spell he was casting over her—was utter madness!

She continued to struggle (only because she knew she was supposed to), and Mad Jack responded by pressing her up against the wall, pinning her in place with his hips, making his point that there was no escape.

Miranda gasped as his entire body covered hers, left her with an intimate knowledge of this man's intent, for there it was, hard and insistent, riding against her.