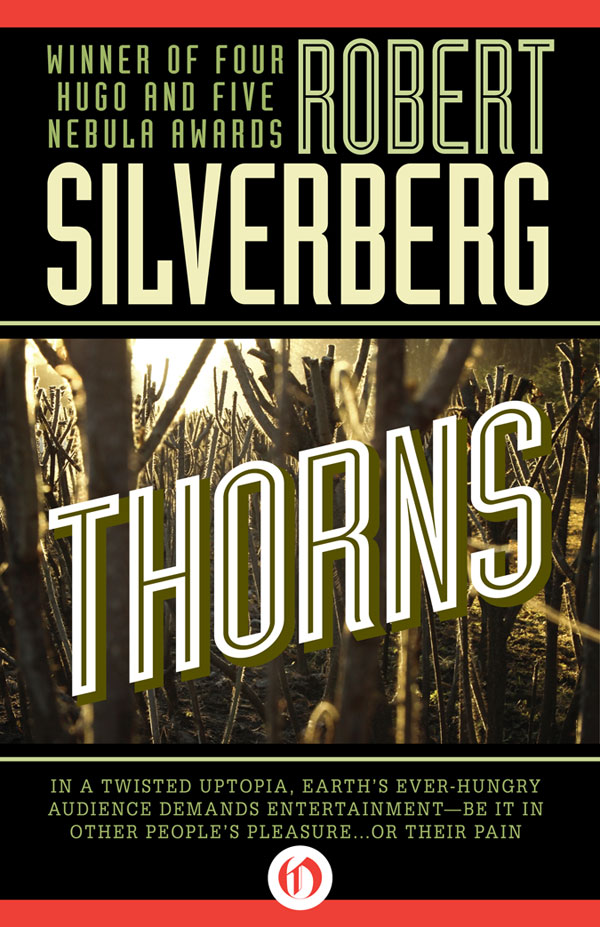 For Jim and Judy Blish

CAMILLA: You, sir, should unmask.

CASSILDA: Indeed it's time. We have all laid aside disguise but you.

STRANGER: I wear no mask.

CAMILLA: (Terrified, aside to Cassilda.) No mask? No mask?

It was January, 1966. I had just turned thirty-one, had been writing science-fiction professionally for more than a decade, and was in the process of coming into my maturity as a writer. I didn't know it then, of course, but I was on the verge of the most important creative period of my career, a decade in which novels would come pouring out of me at a rate of two or three a year and establish me as a significant figure in the field.

My publisher then—one of several, but this was the one for which I felt the greatest affection—was Ballantine Books, and my editor there was Betty Ballantine, the warm and shrewd co-owner of the firm, who took the greatest personal interest in the doings of her writers. Betty had accepted my first book for her,
To Open the Sky
, in 1965, and, as it worked its way toward publication, I let her know that I had a new novel in the planning stage, a more than usually ambitious one for that era, when most of the science fiction

being published was pretty conventional in style and structure.

"The book as I have it in mind now," I told her in a letter of January 26, "is intended to grow from the interplay of three rather unusual characters, and most of the plot can only evolve in the actual writing, not beforehand. So I have to figure out some way to make the story intelligible to you in outline form without killing too much of the organic development that must spring from the chapter-by-chapter life of the book. Is a puzzle, but I'll see what I can do to solve it."

I was planning to call the book
Thorns
, itself a pretty odd title for an s-f novel at the time, and I was signaling by that that I planned to write a prickly and unusual book quite different from anything I had done before. A couple of weeks later I had an outline ready—a sort of an outline, anyway—and I sent it to Betty on February 14, 1966, with this covering note:

"As I warned in my last letter, the outline doesn't communicate much of the action of the story, merely the main structure. I can't do a 'he-did and then she-did' kind of outline for this one; the events will have to grow out of the relationships between Burris, Lona, and Chalk, and much of the texture of the book will rely on background details that can't be sketched in advance. I hope you can gather enough of my intentions of the outline to go ahead with it. What I have in mind is a psychological s-f novel, somewhat adventurous in style and approach and characterization, and I think I can bring it off. It's worth trying, at any rate."

Betty agreed, though she thought about it for a while. An offer for the book came on May 25; I accepted it eagerly; and through the summer months of 1966, a summer of record-breaking heat in New York City, where I lived then, I spent much of my time thinking about the book I had promised to write.

The heat wasn't my only problem that summer. Even while planning
Thorns
, I was also involved in doing research for a huge non-fiction book that I was under contract for, a study of the prehistoric Mound Builder cultures of the central and southern United States, for which I traveled through several midwestern states. And I was sick, also. That June I had finished a long and trying book on the myth of El Dorado, and the stress of it, I think, overtaxed my system and sent my thyroid gland into overdrive. I lost close to twenty pounds within just a few weeks—and I was slender to begin with. I had not been ill since finishing with the standard childhood maladies, indeed was not even prone to minor upsets, and this was a startling development. I grew gaunt and haggard, and barely had the energy to work for a time, until, finally, my doctors discovered what was wrong and prescribed a medication that slowly set things to rights. By the time I attended the World Science Fiction Convention in Cleveland at the beginning of September, 1966, I had begun to regain my strength. And as soon as I returned from the convention trip I sat down to write
Thorns
.

I was a fast writer in those days, but, spurred on by joy over my recovery and excited by the prospects of writing a novel that would make my colleagues sit up and take notice, I wrote
Thorns
more quickly even than was usual for me – practically in a white heat. The first sentence was waiting for me that first morning—"Pain is instructive"—and everything else followed as swiftly as I could move it from my overheated brain to my typewriter keys. I averaged something like twenty pages a day of manuscript, hardly ever pausing to revise.

After little more than a week of virtually non-stop work I found myself at the halfway point of the book. (Science fiction novels were shorter in those days.) So I allowed myself a weekend's brief holiday and drove out to Milford, Pennsylvania, where many of the best writers of the field had gathered for the annual writers' workshop that Damon Knight had been holding for the past decade. I knew nearly all the writers there, and they knew me. I think they all respected my professionalism and my productivity, but some of them, I know, still held me to account for the vast quantity of fast-action adventure fiction that I had turned out for the lesser pulps in the 1950s. Their gentle and not-so-gentle comments hardly troubled me, though, for I knew that I was midway through a book that would change their opinion of my work, and I drifted through that weekend's party in a curiously exalted state, eager to get back to my typewriter. (During that weekend I glanced at an Italian science fiction magazine that Damon had just received, and found a harsh review of one of my earliest novels that had recently been reprinted in Italy. "Badly done and wordy," the critic said—
malcondotto e prolisse
. Perhaps that was so. The harsh criticism didn't bother me at all. I knew that I had left that phase of my career behind me. The next day, when I went home to finish
Thorns
, Malcondotto and Prolisse joined the cast of characters.

Another week or so of furiously swift work and the book was done, and off it went to Betty Ballantine, who responded quickly that on first reading she thought the book was fine, but added that she wanted to read it again, more slowly, with an eye toward possible revisions. I waited uneasily, and about ten days later, on November 15, she wrote to say "On re-reading
Thorns
I find there is very little, in fact, that I would like to see added." She did want the character of Duncan Chalk developed more explicitly right at the beginning, and offered me a suggestion for expanding the passage early in the first chapter beginning, "In a large and indifferent universe, he had carved out a sizable private pocket." Betty provided a fifteen-line rewrite of that passage, which survives in the book, after further rewriting by me, as two longer paragraphs.

Balllantine published
Thorns
in August, 1967. In those days the Science Fiction Writers of America was still a small enough organization so that publishers could send free copies of new books to the entire membership, and Ballantine distributed
Thorns
that way to my colleagues, along with a discreetly worded memo suggesting that the book might be a contender for the Nebula award.

It was. Everybody seemed to read it right away, and just about everybody was startled to discover that the author of such space operas as
Vengeance of the Space Armadas
and
One of Our Asteroids is Missing
had had a novel like
Thorns
in him. They let me know, in fact, just how surprised they were: not entirely a flattering thing to hear, but I contented myself with gently pointing out that I had written those books, and the others like them, close to a decade earlier, written them very quickly so that a newly married young man could pay his rent, and that it was reasonable to think that I might have improved somewhat in the intervening time.

At any rate,
Thorns
succeeded in obliterating, overnight, the image I had acquired of a purveyor of efficiently constructed hackwork. It did indeed find a place on the Nebula award ballot in 1968, the first of my novels to do so, but in those years the young Samuel R. Delany could do no wrong, and his book
The Einstein Intersection
captured the trophy; mine was the runner-up. When the

time came for Hugo award nominations a little later that year,
Thorns
once again made the final ballot, contending once again against the Delany, but this time Roger Zelazny's extremely popular
Lord of Light
got the nod from the voters.

Still, it was a considerable achievement for a book by the author of
Vengeance of the Space Armadas
to come so close to winning the Hugo and the Nebula, and thereafter I no longer had to worry about image problems: I was thenceforth known as the author of
Thorns
, and then of
The Masks of Time
and
Up the Line
and
The Man in the Maze
and all the other novels that streamed from my overheated typewriter in that fabulously fertile era. Looking through
Thorns
now, more than forty years after the fact, I see some things—self-conscious little literary references, subliminal quotes from this or that masterpiece of the past—that I wish were not there. But so be it: the book is the book of a young writer who is stretching his powers to their full extent for the first time, and if, now and then, his reach was a little greater than his grasp, that seems to me a pardonable failing. I'm proud of the book and of the ambitious younger me who wrote it, and I'm delighted to see it coming back around in this new century and in new publishing media that weren't even thought of in science-fiction when I wrote it.

THE SONG THE NEURONS SANG

On crystal rungs he ascended the east wall of his office. Far on high was the burnished desk, title inlaid communicator box from which he controlled his empire. It would have been nothing for Chalk to sail up the wall on the staff of a gravitron. Yet each morning he imposed this climb on himself.

A variety of hangers-on accompanied him. Leontes d'Amore, of the mobile chimpanzee lips; Bart Aoudad; Tom Nikolaides, notable for shoulders. And others. Yet Chalk, learning the lesson of pain once more, was the focus of the group.

Flesh rippled and billowed on him. Within that great bulk were the white underpinnings of bone, yearning for release. Six hundred pounds of meat comprised Duncan Chalk. The vast leathery heart pumped desperately, flooding the massive limbs with life. Chalk climbed. The route zigged and backswitched up forty feet of wall to the throne at the top. Along the way blotches of thermoluminescent fungus glowed eagerly, yellow asters tipped with red, sending forth pulsations of warmth and brightness.

Outside it was winter. Thin strands of new snow coiled in the streets. The leaden sky was just beginning to respond to the morning ionization poured into it by the great pylons of day. Chalk grunted. Chalk climbed.