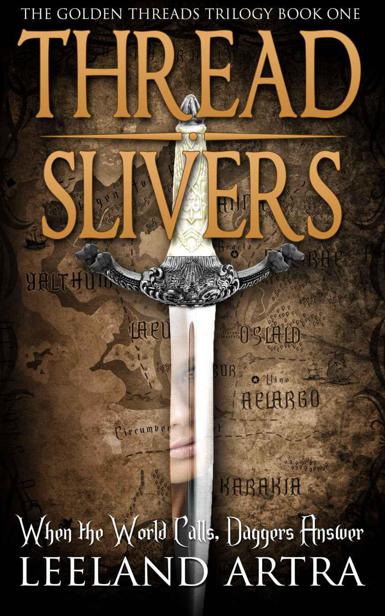 Map of Kingdom of Aelargo

A Personal Note from Leeland…

Other Works BY Leeland Artra

Book One of the Golden Threads Trilogy

Thread Slivers: Book One of the Golden Threads Trilogy

This book is dedicated to my children Lewin & Sapphira: may you both always stay sharp; and to my beautiful wife Evelina for putting up with my late nights dreaming at the keyboard. 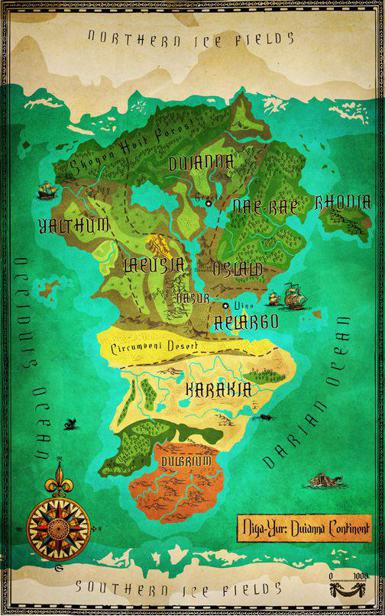 Map of Kingdom of Aelargo 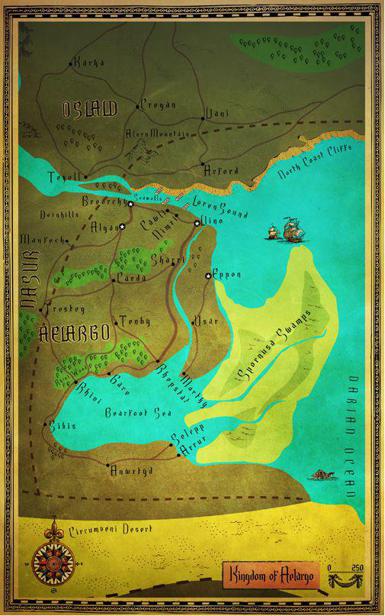 Boots On the Ground 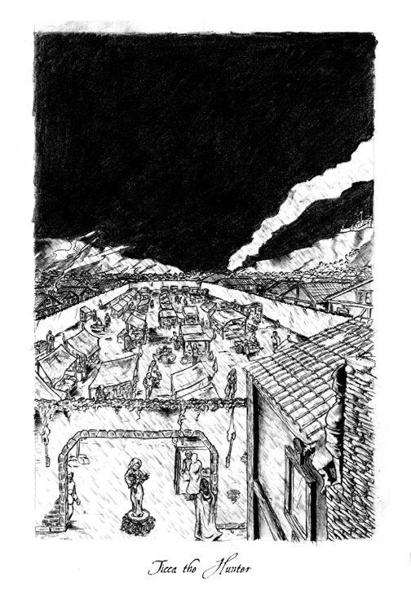 T
ICCA MOVED SLOWLY AND CAUTIOUSLY over the roof, making sure she stayed in the chimney’s long shadow as she inched towards it. She kept a watchful eye on the traffic in the street below.
I can’t be spotted, or someone will try to kill me; and worse, I’ll miss Sula’s target.
Her cloak had a little magic that helped her blend into the shadows, but she knew it didn’t make her invisible. It was a dangerous task to spy on these powerful people. But, she wanted to earn some respect as a Dagger, and Sula was her first big client. Ticca had managed to earn a solid reputation in a dozen or so small jobs before Sula, who had been using more senior Daggers, unexpectedly sat at her table. This was her fifth assignment for Sula, and she was earning a lot of respect and coin for her successes.

Her timing was perfect. She was in position, in the darkest crook of the chimney, as the sun started to touch the western horizon. Nervously, she scanned for any signs she had been spotted, moving into her vantage point. Everything was normal; it was business as usual for the merchants here in the Day Market. From underneath her cloak, she pulled the solid cylinder out and held it firmly in her left hand.
Hopefully, that courier will be back.

As the darkness deepened, Ticca became the hunter; waiting, watching the traffic moving through the only known entrance to the market square. The majority of the more upstanding merchants had already locked up their wooden stalls and carted off as much as they could in their push carts, past the beautiful entry statue. Hands on their sword hilts, in their banded leather armor, the last three remaining city guards left for more respectable parts of the city. A few late shoppers moved about the remaining merchants, who were trying to evacuate the square before the sun finished setting. The Day Market was closed; this was about to become the Night Market.

A stout, confident man walked into the market wearing a dark, charcoal grey cloak. Ticca’s heart rate picked up with excitement as she recognized him as the hired assassin — or Knife, as they were called — that Sula had had her identify a few days earlier.
What are you doing here personally?
What have you been up to the last few days?
She held her breath as the Knife scanned the market for someone, and then looked up at the roofs, his gaze passing over her. Not finding who he was looking for, he moved into a dark shadow by the wall and pulled his hood up over his head, blending very well into the shadow.

Ticca stared intently, trying to find his outline.
Damn it, don’t lose him now. If he is here, then the courier isn’t coming.
She considered leaving, but her instincts were telling her to stay.
This might be important to Sula. Maybe worth a bonus.

She couldn’t make out if he was still where she last saw him. She had to decide if she should move to a new position to try and locate him.
From where he was, he can see the entrance and me, if I’m not careful. I know he won’t take kindly to seeing someone on this roof. He probably won’t move far. He wants to meet someone.
She started taking careful tally of the rest of the square’s occupants in her mind, thankful she’d picked a location to both remain unseen, and yet, be able to view the majority of the square. The courier she was expecting still had not arrived, and she kept her attention primarily focused on watching for the Knife to move. In her peripheral vision, she saw the odd twilight shift of the statue, signaling that the Night Market was in business.

When Sula’s first mission for Ticca had brought her here to the Night Market, that statue had seemed so out of place, it shocked her. During the day, it was an amazingly good portrayal of a young elven lass, shopping basket hung loosely on her left arm, her right arm lifting ever-so-slightly in friendly greeting, and a warm, expressive smile, welcoming market visitors.

It was the kind of statue only the wealthiest could dream of commissioning for their estates. Yet here, it sat in the middle of the only entrance to a medium-sized, dead-end square, just inside the lower area of town, which had been a market for as long as anyone could remember.

The night patrons began to arrive slowly, and the evening’s dealers materialized from the darkened alleys, moving past the statue to enter the square quickly. People in long, expensive rain capes mixed easily with dock workers in their dingy clothes and thick coats. Everyone pulled coats, capes, and collars tight; more to avoid too much exposure to each other, than to keep the rain out.

Watching the deals for the past few nights had given Ticca a good idea of the basic rules of engagement here. Once the sun had set, the market was too dangerous for honest city guards. This was the legendary Night Market, which she had heard tales of long before she came to the city. She’d thought its reputation for having drug dealers, pawn brokers, and facilitators of any act, was exaggerated. But the merchants, or ‘Hands,’ as they like to be called, really lived up to that reputation. She shuddered as she remembered some of the breath-taking and brutal things she had witnessed passing through here; the worst, being a bag of what she was sure were fresh body parts.
I would like it if this place shut down, but as my Uncle says, ‘People will always be capable of evil, and some will always choose to be evil.’ Maybe containment here really does keep it in check.

A dignified Hand who dealt in secrets, and a regular visitor to the Night Market, strolled past the statue. The stone figure now held its basket tight, eyes wide with fear and warning, right hand held up, as if to warn visitors of the danger within. She still didn’t understand why they bothered to put that statue there, but it did make a good signal for whether or not it was safe to enter.

The shadow she had been watching split in two, with the real shadow seeming to reluctantly release its twin.
That’s a neat trick you didn’t have last time.
The Knife kept the hood up and drifted gracefully to intercept the newest arrival. They met, like all the others, a safe distance from everyone else, and started negotiating. It did not take long before the Knife passed a small package to the Hand, who put it in his coat.

Even in the rain-cloaked night, she could clearly see the small package was tied with a glinting golden thread. Her heart skipped a beat as she realized the implications.
Sula mentioned there might be something tied with gold. He is the contact Sula wants identified. The Knife didn’t use the courier; he brought it himself. That has to be unique.
She smiled, knowing she had succeeded again.
One week, and I have found the Hand
.

When the Hand’s fingers came out of the coat, they passed over the Knife’s palm, dropping a small bag that vanished instantly.
Probably going to waste that coin on something stronger than hyly at a Red-Door. No matter, I have my quarry.

The deal done, the Knife drifted off to the left. She didn’t bother to watch; her attention was fixed on her new target, the Hand.
Be sure, Ticca; be real sure you can pick him out again
, she cautioned herself.

Once she had his walk, shape, and features down, it was time for the odd part. Under her cloak, her left hand squeezed hard on the small, solid metal tube it held. Although physically impossible the solid tube became slightly smaller activating the spell. She felt the small tingle of released magic flow up her arm. It wasn’t unpleasant, but she was glad she had been warned; otherwise, she might have looked down at her hands, which could have been disastrous. Trying to ignore the sensation, she kept her eyes locked on the Hand, as if her very life depended on it, which it likely did. The spell moved through her veins, and up through her neck, to her head, and she felt it rush from her eyes.
This doesn’t seem to be doing anything, but Sula insisted it be done before tracking the next link in her chain.

After the spell was released, Ticca didn’t wait to see the result. She reached back, grabbed the top of the roof line, and levered herself over the top, staying low and not allowing her own cloaks to flutter. Once over and out of sight from the market, she hurried until she was a few streets away. Checking that she had not been spotted or followed, she lowered herself, unseen, into another small alley. Rapidly, she stripped off her thin, outer cloak and folded it into a tight bundle. The evening chill instantly began to bite through her normal cape, which had been hidden underneath. She carefully placed the folded cloak into her secure satchel, in the chain-lined pocket. Again, she marveled that a full cloak could become such a small package of cloth, that it easily fit inside one of her hands.

The Sea Taketh (Alex Singer) by Teresa Rae
McCarthy's Bar: A Journey of Discovery in Ireland by Pete McCarthy
Bear Lake by A B Lee, M L Briers
Me and Miranda Mullaly by Jake Gerhardt
All He Desires: The Invitation (#1) by Erin Lark
Nowhere to Run by Valerie Hansen
My Soul Keeper by Ker Dukey
The Bridegroom by Joan Johnston
Big Blue Valentine: A Sci-Fi Alien Romance by Sue Lyndon
Seeking Justice by Rita Lawless
Our partner