Read Thrown to the Wolves (The Faith in Peril Trilogy) Online

Thrown to the Wolves (The Faith in Peril Trilogy) 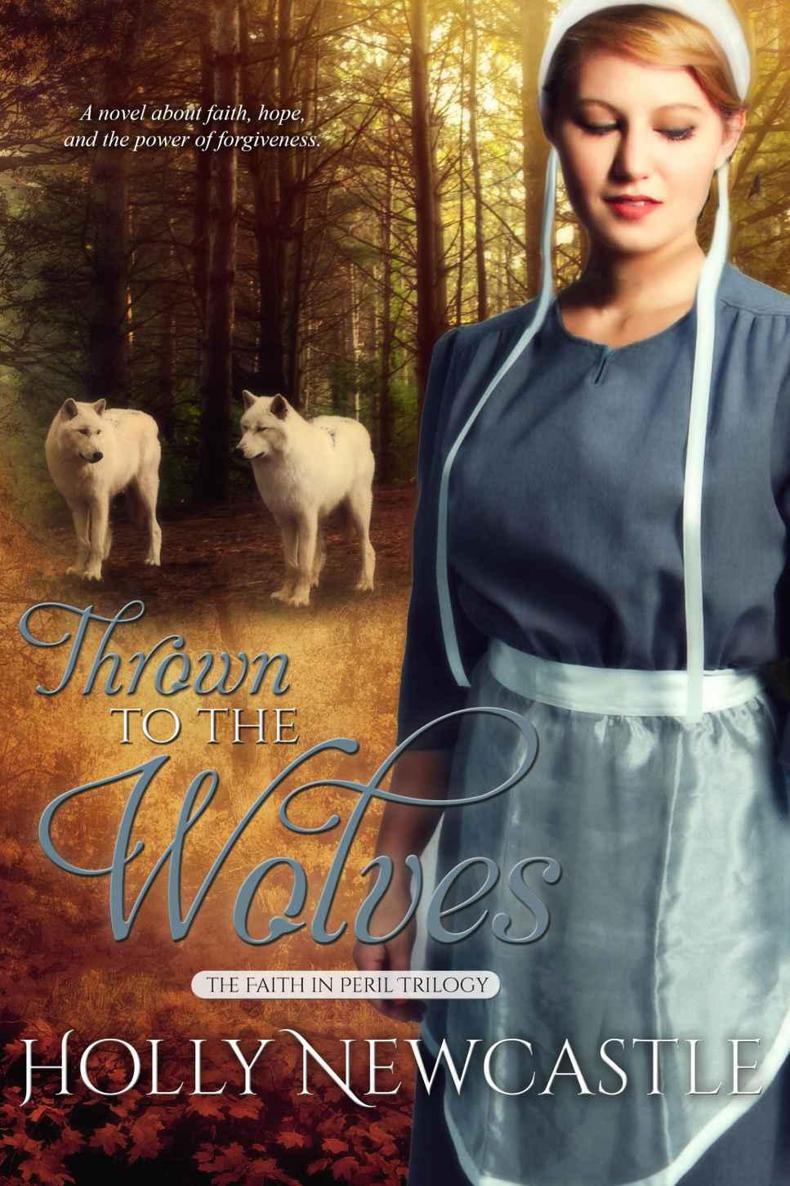 The Faith in Peril Trilogy

All Scripture quotations are from the King James Version

This book contains material protected under International and Federal Copyright Laws and Treaties. Any unauthorized reprint or use of this book is prohibited. No part of this book may be reproduced or transmitted in any form or by any means, electronic or mechanical, including photocopying, recording, or by any information storage and retrieval system without express written permission from the author.

The Faith in Peril Trilogy

Tears of the Bishop

I lay in bed thinking about the evening to come, as twinges of anticipation raced through me. My mind spun at the thought of seeing Michael Esch tonight, thereby preventing sleep. I wished he would ask to court me. Being eighteen and eager to find a husband, I wanted a family of my own. A neighbor, Daniel Stoltzfus, twice asked to take me home after singing, but I detested him with a passion, refusing the offers. I felt certain my life would be complete if Michael courted me, and perhaps he would soon.

My sister, Anna, and I shared a bed. I stared at her face, the flawlessness of her skin and her full, pink mouth, which was partially open. Her chest gently rose and fell with each breath. Though four years younger than me, I felt closest to her out of all my siblings. Ruth, who was barely twelve, slept across the room with Molly, a German shepherd mix, who took up most of the bed. The dog had lain on its back, with its paws across its chest, while the legs had fallen open. Poor Ruth had been forced to the edge, where she was in danger of falling off, but, despite the lack of space, she slept soundly.

“I believe I know who you’re thinking of, Rebekah, but Daniel Stoltzfus would be a better choice,” said Anna.

I groaned inwardly. She wasn’t asleep after all. “Oh, please don’t say that.”

The Troyers had hosted church this morning. The barn accommodated the more than thirty families who attended the service, and we had borne the discomfort of the late August heat, sweating in the nearly stifling humidity. Lunch had followed, as we had eaten at long wooden tables, while dozens of conversations rang out. Once we had arrived home, everyone had taken to bed to rest, until the evening singing. The look of the shadows in the room, told us that we should wake and get ready. I awaited the singing with nervous elation, because the courting would begin afterwards, and I had my heart set on Michael Esch, who I secretly admired.

“It’s only a suggestion,” said Anna. “If you want dull and docile, then pine away after Michael.”

“I’m ignoring that. I disagree completely.”

“Because you’re blind and stubborn.”

“I’m ignoring that as well.”

I stared at the wood beams over my head that reached across to the other wall. My life had begun in this farmhouse, and here I had spent its entirety. My sister, Anna, and I had made yellow, paper stars years ago, hanging them from little nails. Only three remained, the paper having faded to white. This brought back sweet, happy memories of childhood and running around through the fields that surrounded our house. I stared at them now, while a slight breeze billowed the curtains, bringing with it hot, sticky air.

“Do you think she’ll still marry him?”

I glanced at Anna; relieved we had moved on to another subject. “I don’t know.” She referred to Evelyn Shetter, who had planned to marry Ira Chupp, but a farming accident had left him with a broken back, unable to use or even feel his own legs. “She was by his side today.”

“I saw that.” Anna arched, her arms reaching above her head, while she yawned. “I have to ask you something. What would you do if that happened to your intended? Would you seek another or marry him, cripple and all?”

“It should be easy.”

“Nothing is ever easy. We’re all tested. Evelyn is being tested now. Her devotion has been brought into question. Everyone’s looking at her. They all want to know if she’ll leave him because he’s an invalid. He can’t walk. He won’t be able to manage a farm.” I leaned near, whispering, “Will he even be able to make children?” I could speak plainly with Anna. We discussed everything, no matter how delicate.

“I was wondering that too.”

“People will help them, you know that.”

The community had already rallied around the couple, offering support—food and money—which was expected. “That’s true, but … I know she wants children.”

“What did the ‘English’ doctor say? Did you hear anything? Perhaps it’s just the legs. Maybe…other things work.”

I giggled, “For Evelyn’s sake, I hope so. I prayed for her, you know.”

“As did I. I prayed for his recovery too, but it failed to happen.”

“But he’s alive. The fever is gone. There’s a miracle.”

“Yes.” Anna lifted her head from the pillow, gazing at Ruth. “That dog’s taken over the entire bed.” Molly, who sensed we spoke about her, kicked a paw, and turned to her side, where she stared at us, her black eyes glinting. “You silly dog.” She sniffed the air in response.

“I need to use the outhouse.”

“I wonder if Mam and Dat are awake?” I swung my legs off the mattress, my bare feet touching braided carpet. The dog, observing this movement, jumped from the bed, waking Ruth, who grunted.

“Time to wake up, sleepy-head,” I said. “We don’t want to be late for the singing. It’s what I’ve been waiting for all week.” We would return to the Troyer farm again, partaking in the festivities, which would go on well into the night.

Anna remained in bed, while Molly followed me from the room, her paws scratching against the wood floor. Walking down the dim hallway, I passed my parent’s bedroom. They had left the door open for the breeze. They lay on their sides, spooning together, Mam curled around the baby, and Dat behind her, an arm draped across her midsection. The three of them were like peas in a pod. My brothers, David and Jacob, slept across the hall behind the closed door of their bedroom.

The only sound in the house came from an old ticking clock, which had been in the family for generations. My Oma, whom I missed dearly, had the clock in her possession before she grew old and sold her farm. Molly and I wandered through the parlor towards the kitchen, located at the back of the house. I saw dishes drying by a large sink. Mam had covered the table with my favorite yellow cloth, which I had made as a child. Three apple pies sat in the center, waiting for us to bring them to dinner tonight. An image of Michael filled my mind. I could imagine him entering a kitchen similar to this and upon seeing the selection of pies, praising me for making them. Daniel Stoltzfus complimented Mam several Sundays ago for a cherry pie he had eaten, and she corrected him by saying I had baked it. A frown appeared on my face from the memory.

I reached for the door, holding it open for Molly, who scrambled down the wooden steps. The outhouse was across the yard, and I wandered over a stone path through the garden just before the small shack. Fluffy, white, billowing clouds had gathered, the sound of thunder booming in the distance. The threat of a late afternoon storm brewed. The dog sniffed at a row of vegetables, while I disappeared into the outhouse, the smell wrinkling my nose.

Our farm encompassed hundreds of acres of corn and wheat, grown in neat rows. A dense forest that remained mostly unexplored bordered this. I preferred open spaces, and I adored the grounds around the house and the pond. My father managed the farm, aided by his twenty-one-year old son, David, my older brother. They worked long hours in the dust and heat, while Jacob, just turned five, helped where he could, although too young for hard labor. He helped tend the animals, and Mam put him to work in the garden, pulling weeds. She also kept him employed feeding the chickens and other little jobs.

Emerging from the outhouse, I spied Mam, who stood in the doorway with Abe in her arms. “You’re awake,” she said.

“We should ready ourselves soon.”

“I know.” Molly had wandered off; I glimpsed her tail swooshing in the distance, her body hidden by tall grass. “I can take him, if you want.” I held out my hands, and she gave me the baby, who cooed.

“Thank you, Rebekah.” She stepped onto the path, her blue dress brushing her ankles.

I gazed at Abe, whose face was plump and rounded. I could not resist kissing his cheek, while he squirmed in my arms. He smelled like almonds, sweet and delicious, his skin soft to the touch. Mam tried to have another baby for years, fearing she would not be able to have more. Abe’s birth had therefore come as a blessing to us. Anna and Ruth and I sometimes fought over who would get to hold him, as we all adored our new brother.

We had several barnyard cats, although Topper was the only one allowed inside the house, the cat having been domesticated years earlier. She sported greenish-yellow eyes, gray fur, and a white-tipped tail. I found her in the kitchen, lapping at a bowl of water, while voices echoed at the end of the hallway. Everyone was awake now. Even Mam had returned, breezing into the room.

“Did you sleep well?” She undid her white
kapp
, revealing wayward hair. “I need to tidy myself.” She glanced at Ruth, who had approached with Anna. “Is David up yet?”

“We’re going to supper soon. You’ll just have to wait.”

Ruth eyed the pie. “I wish I could eat this now. It smells very nice.” She leaned in, sniffing.

Mam pursed her lips. “Don’t touch it,” she said sternly, but humor glinted in her eyes. “I’ll be cross if any bits and pieces are missing. You may have pie after supper. We had a big lunch. There’s no reason why you can’t wait a little longer to eat.”

Deceit: A Beauty and the Beast Novel by MJ Haag
Dark Skye by Kresley Cole
Orion by Cyndi Goodgame
The Walls of Byzantium by James Heneage
Troll Mill by Katherine Langrish
The Collectors' Society 01 by Heather Lyons
As You Like It by William Shakespeare
Defying Pack Law by Eve Langlais
The Fugitive Prince (Bell Mountain) by Lee Duigon
Lone Star Heartbreaker by Anne Marie Novark
Our partner