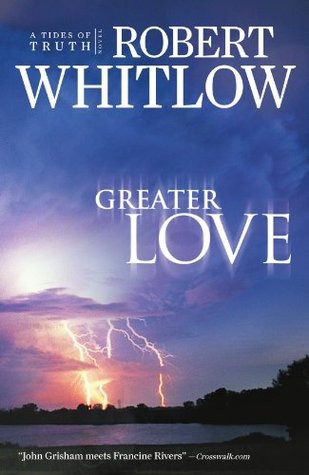 Book Three in the Tides of Truth series

© 2010 by Robert Whitlow
All rights reserved. No portion of this book may be reproduced, stored in a retrieval system, or transmitted in any form or by any means—electronic, mechanical, photocopy, recording, scanning, or other—except for brief quotations in critical reviews or articles, without the prior written permission of the publisher.

Publisher’s note: This novel is a work of fiction. Names, characters, places, and incidents are either products of the author’s imagination or used fictitiously. All characters are fictional, and any similarity to people, living or dead, is purely coincidental.

To the unselfish among us. Your reward is sure.

Greater love has no one than this,
than to lay down one’s life for his friends.

T
HE GIRL BOLTED INTO THE BLACKBERRY PATCH
. S
HE CRIED OUT
in pain as the tiny briars ripped her skin. The two men chasing her thrashed about in the darkness. The girl stuffed her fist in her mouth, bit down on her knuckles, and slowly eased herself to the ground.

“Over yonder! I heard something!” one of the men called out.

The sound of the men came closer. The girl could see the beams of flashlights in the tops of the bushes. She was wearing a dark shirt and blue jeans. Tucked in her jeans was the smooth leather pouch she’d snatched from the edge of the table when the men dragged her stepmother’s boyfriend into the night.

Her arms were tanned dark by the Georgia sun and streaked with red dirt. In the stillness tiny gnats found her face and began crawling across her cheeks and into her ears and nose. She didn’t dare slap them away.

“Jessie, we know you’re close by,” the other man called out. “Ain’t nobody going to hurt you. Come on out and show yourself, and we’ll give you something nice.”

“What are you talking about?” the first man hissed.

The cuts on Jessie’s arms, hands, and face stung as sweat ran into the open wounds. She gritted her teeth then licked her lips. Her tongue brought several gnats back into her mouth. Growing up south of Macon, she’d eaten a bushel of gnats by the time she turned fifteen. In the distance, she heard the sound of thunder.

“She ain’t coming out,” the first man said to the second. “And now it’s going to come a shower. That’s why we should have brought the dogs. They’d love rompin’ through this here thicket. Blackie would flush her out in no time.”

“Well then, why don’t you shut up and go back to the shed and get them on down here,” the second man answered. “I’ll stay close by in case she tries to make a run for it.”

“Should I call Clay while I’m up at the house?”

“And tell him we brought his pouch into the house instead of leaving it locked up in the car? We had two jobs to do—teach Rod a lesson and deliver the pouch from the German guy in Atlanta. He ain’t going to be happy with one out of two.”

“I thought it would be better to keep it in sight in case Rod made a run for the car. He’s got a set of keys. I didn’t know the girl was there.”

“And that’s why we’re in this mess. Now git. For all we know she may already be at the highway.”

Jessie heard one of the men move away. The thunder rumbled closer. It wouldn’t hurt her feelings if the men beat up Rod. Twice, the dark-haired man had hit her so hard it made her woozy. Her stepmother didn’t say anything. Rod had bought her a new car and gave her twenties like they were ones.

Jessie wasn’t afraid of the dogs, especially Blackie. They’d become friends since Rod brought them home. If the men brought the dogs to the thicket, Blackie would come straight to her, if for no other reason than to lick her face.

Jessie shared the men’s fear of Clay. The way Rod acted when Clay came into the room and then talked about him after he left was proof enough for her. Rich people in fancy clothes could be scary, too.

There was a flash of lightning followed by gunshot thunder. The man who remained behind swore. Another flash of lightning hit a nearby pine tree. There was a loud crack as the tree split apart. Jessie screamed then clamped her hand over her mouth, sure she’d given away her location. Barely breathing, she crouched and waited for the man to come rushing toward her. But all she heard was the sound of a tree creaking and popping. The flashlight beam disappeared.

Jessie eased up from her hiding place. The damaged tree was clearly visible. Flickering flames marked the path the lightning took as it hungrily sought the ground. Another bolt of lightning lit up the thicket with daytime brightness. In the split second of illumination, Jessie saw a man lying at the foot of the tree, his arms splayed out and his legs in an awkward position. She didn’t look twice.

She ran out of the thicket as fast as she could go. But not toward the highway. She’d read in a library book about a runaway girl who discovered the best way to travel without anyone knowing about it was along the railroad tracks. Unlike cars, trains don’t have curious eyes.

As Jessie ran toward the train tracks, huge drops of rain began falling from the sky. She stopped for a second to rub the cool moisture across her arms and face, then kept running as fast as her brown legs could take her. She didn’t know if dogs could pick up a human scent in the rain.

Jessie wasn’t going to slow down and find out.

T
HROUGH THE WINDOW
I
COULD SEE A FEW BROWN LEAF STRAG
glers clinging to limbs of an oak tree. Powell Station was in the Appalachian foothills so snow wasn’t uncommon in November, but it rarely fell until after the middle of the month. I rolled onto my side and pulled the quilt up to my chin. I was glad to be home, among my family, spending a few days in the daily routine of life.

I slipped out of bed so as not to wake the twins, Ellie and Emma. After retrieving the morning eggs, I joined Mama in the kitchen. Our diet was high in cholesterol, but there wasn’t a carton of soft drinks on our property, and honey from hives behind the garden was our favorite sweetener.

Mama and I had worked together in the kitchen from the time I was old enough to be trusted at the stove until I left for college. When I returned home, familiar patterns returned without effort and we moved about efficiently without getting in each other’s way. I loved meal preparation. There was a sense of fulfillment in fixing hot, delicious food for the people I loved. Daddy claimed my scrambled eggs were fluffier than cotton candy at the county fair.

Daddy and Bobby came inside and washed their hands at the garden sink beside the rear door.

“It’s a glorious morning!” Daddy exclaimed to Mama. “Do you know why, Lu?”

Mama smiled. We all knew the answer.

“Because we’re here together,” Mama replied.

Daddy dried his hands and kissed me in the usual place on top of my head. He grabbed Ellie by the shoulders.

“Which one are you?” he asked, peering into her blue eyes.

“Daddy, you know!” she answered with a quick smile.

Daddy kissed her on the right cheek. Emma came up for a kiss on the left cheek. Daddy grabbed Mama and squeezed her waist.

The timer I used for the hard-boiled eggs went off. While I cooled the eggs enough to remove the shells, Ellie filled large bowls with steaming oatmeal. Emma set a cup of raisins and a jar of honey on the table, then put a cloth napkin at every place and correctly positioned on each a knife, fork, and spoon. I’d never been embarrassed by a lack of table manners. Mama’s homeschool curriculum included a course in etiquette that we were expected to incorporate into everyday practice. We ate our meals at a long picnic table painted white. Mama and I sat across from each other at the end nearest the cooking area.

We held hands around the table. I reached across and took Mama’s hand. It was slightly dry and coarse. Her fingers spoke of a lifetime of service to others.

“Thank you for this fresh food, my loving family, and this crisp, fall day. Bless them all. In Jesus’ name, amen.”

“I won’t be a lawyer until I graduate from school and pass the bar exam next summer,” I corrected.

“You’ll do both,” Mama said confidently as she stirred a few more raisins into her oatmeal. “And the Lord will direct your steps.”

Ellie popped a large bite of hard-boiled egg into her mouth. “Tammy Lynn woke me up this morning talking about moving to Savannah and getting married and having babies.”

“That was her prediction for my future,” I responded quickly.

“But you didn’t disagree,” Ellie answered, her voice muffled by egg.

“Don’t talk with food in your mouth,” Mama said.

I turned toward Daddy and Mama. “I have to tell Braddock, Appleby, and Carpenter by the first of December if I’m going to accept the job offer with them. If I turn them down, I could work with Julie Feldman and Maggie Smith in Savannah or come back to Powell Station and open my own office.”