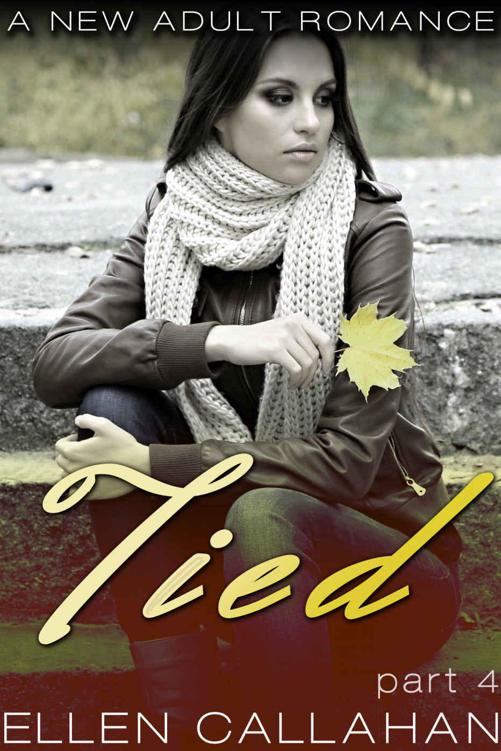 This is the last of a four-part series, best read in order:

This book is a work of fiction; any names, places, and/or situations portrayed within are products of the author’s imagination; any similarity to real persons, living or dead, events, or locales are entirely coincidental.

This book contains mature content that is suitable for adults only.

She’s got big plans for lots of new novels and series. Be the first to hear about new books, sales, and freebies!

It’s free and easy, and she will never send SPAM or share your e-mail address with anyone.

Be the first to know when the next book is released!

It shouldn’t be so easy to break a person.

All it took for me was a single severed tendon.

All it took for her were a few cruel words.

I saw it in her eyes. Every spiteful word that I spat cut her, each deeper than the last. I gave voice to every paranoid vision I’d had while I was reading that webpage. And even when that one, single sob tore from her throat, when the vitality in her eyes was replaced with defeat, still I didn’t let up.

I deserved her wrath. I deserved to lose her, wretched, broken man that I was. I kept slashing at her with my words, because every wounded blink of her eyes stabbed me right back.

I wanted to hurt. I used her to do it. And I barely gave any thought to the lasting damage that it might do to her.

There could be no forgiveness for my vile tongue this time.

When she didn’t answer, I sank to the ground. It was an ungraceful affair thanks to that fucking cast - back up against her door, I inched my legs forward and out and lowered myself to the floor.

I’d drunk too much, thought too much, and said too much. Now I was going to let myself fall asleep outside her room. Was it to torture her or to torture myself?

If there was any mercy in the world, I would have never woken up to find her gone.

But I did. Hours later, hungover, head pounding, I opened my eyes. I was flat on my back, sprawled halfway in the living room, halfway inside her room. The sun shone through her windows and across my face.

Jagged spears of pain went screaming up my leg as I struggled to rise, but it was nothing next to the shame in my chest. She’d left an empty drawer wide open to drive the point home. “
I’ve cleared out. I’m gone
.” She’d only taken what she could carry but I was certain she’d send for the rest.

I crawled into her bed, breathing in the scents she’d left behind. The smell that was just her burrowed its way into my brain. I clutched her pillows, steadied my breathing, closed my eyes. Could I sleep, now that the booze had worn off? Probably not. But that didn’t mean I couldn’t just lie there.

I had no reason to get back up, anyway.

Regret took up a permanent residence in my gut after the night that I found out about Katherine’s pregnancy and drove her away. Some days it would settle down. I’d assure myself that she would return. Maybe she’d see that those words weren’t truly mine - that I didn’t mean them. I didn’t think so low of her. She’d realize they came from a place of self-hatred and disgust. I was a man hovering dangerously close to some proverbial rock bottom. She loved to sing - how would she feel about the world around her if her voice was suddenly and violently taken away? Eventually the sting of what I’d said would fade, and she would see - provided that Patrick didn’t continuously poison her against me.

Other days the regret flared up like an infection. It would physically hurt and nearly bring me to my knees. I told my pregnant girlfriend that she’d be a terrible mother. I accused her of cheating. I got shit-faced and let my fear and anger run my mouth.

The memory made me nauseous.

Going stir crazy certainly didn’t help matters. All my old jobs were unavailable to me - security gigs, bouncer gigs, nobody wanted to hire a guy with a busted ankle. Lee had made some guilty noises about finding me some work but so far he hadn’t come through.

To make matters worse, the tension in the apartment had been slow to dissipate. Riley was finally back to sleeping with Mal, but only recently - she’d been sleeping in her sister’s bed for a while after Katherine left.

I thanked every lucky star in the universe when she and Mal finally seemed to make up - or to at least come to a truce. There was nothing to fight about if Katherine was apparently not living in the apartment. If she wanted to come back, though, that would be a different story. I didn’t blame Mal for not wanting to live with a kid - but goddamn did he pick a shitty moment to let that thought out of his mouth.

“You should be using your crutches, dumbass.” Mallet really did talk too damn much.

“Mind your business, I’m fine,” I grumbled, making my awkward way out of the bathroom and into the kitchen. The cast was off. Every time my leg tensed or ached or screamed with pain, I reminded myself of that - the fucking cast was off. I could bend my knee again, though it didn’t feel great.

Now I wore an aircast - basically a big, ugly-looking thick plastic boot. It kept my foot and my ankle immobile. It was heavy and awkward. But I could wear pants again like a normal human being. And more importantly, I could get around ten times easier.

“I can move all right,” I said, following Mallet to the coffee maker. “I’m ready. Today.”

Ready to take a little trip to the Bronx. Ready to scope out the target of my revenge. I hadn’t quite decided what form that revenge would take just yet, but I would take it, damn it. Rabbit and his buddies had taken everything from me when they sliced the back of my ankle. It couldn’t go unanswered.

“Yeah,” Mallet said, “I suspected you would be.”

“Okay,” he said, “I’m overdue for a rest day, anyway.” Mal worked harder than anyone I knew, and it had paid off when he’d gotten signed by an official MMA league that competed in Atlantic City. Luckily he didn’t have to commute
that
far every day - but he did have to commute, and it seemed like he was working harder than ever. Between fighting, random gigs, and his girl, I hardly ever saw him except when we crossed paths early in the morning.

“What are you going to do about Katherine?” he asked. “After this shit is resolved. You can’t do nothing forever. You know that, right?”

He sure liked to poke at that raw, open wound. “Is Riley bugging you?” I asked, then taking the bite out of my voice, “Has she said anything? Do you know how Katherine’s doing?”

“She’s doing okay,” he said, pausing with the coffeepot in hand. “She’s staying at her mother’s, and…” he trailed off.

“She’s working at a camp in the city a couple days a week. She’s staying with that friend of hers those nights.”

“Patrick.” I spat his name like a curse. I never trusted the guy - and now Katherine was living with him.
Part-time. And her stuff is still here.
I clung to that fact like a lifeline. Her furniture, her books, her winter clothes - all still in her room. That was a sign, wasn’t it?

“First things first,” I grumbled, “Let’s go to the Bronx.”

My fists clenched. My jaw clenched. Every muscle tensed when I spotted Rabbit on the sidewalk, approaching an unlabeled, run-down gym on the corner across the street from us.

That son of a bitch.

I remembered his face as clearly as I remembered my closest friends’. His dark and beady eyes, remorseless beneath a heavy brow. Those tattoos, deliberately winding up his neck. Who got neck tattoos like that?
Criminals, that’s who
. My own constellation of ink rode up pretty high on my shoulder, but it wasn’t an on-purpose mark on my neck.
And it doesn’t look like it was scrawled on in a prison yard.

Mal and I lurked inside a post office, watching through the window. Like a couple of fucking cowards.

“Lee came through,” Mal said, his voice as tense as I felt, “There he is.”

“We could take him now.” He passed inside, but he’d have to come out again. I’d wait all fucking day if that’s what it took.

“Yeah.” Actually I hadn’t thought that part through, but pounding his face with my fists while Mal held him up like a punching bag sounded like a good enough plan to me.

But Mal was shaking his head. “I’m concerned it will be too obvious.”

“Who’s he gonna tell?” I asked. “The cops? He’s wanted himself. I wouldn’t be surprised if there was a fucking warrant out for him before he ever got to me.”

“We’ll get him,” Mal assured me. “We know where he hangs out, now. I’m thinking we should run this by Surly.”

“Fuck that.” I stepped back outside. I don’t know what I was planning. I was so blinded by rage that I couldn’t think straight.
He took everything from me!

I should still be fighting.

I should still be with Katherine.

I never would have said the things I’d said if I hadn’t been brought so low. All of it, everything that had gone wrong - it was all his fault.

Mal grabbed my arm before I could make my slow way across the street. “Come on,” he said, “Let’s go sit. You aren’t seeing things clearly right now.”

Vietnam by Nigel Cawthorne
Forever Charmed (The Halloween LaVeau Series, Book 1) by Pressey, Rose
His Own Where by June Jordan
Unforgiven by Lorhainne Eckhart
The Crystal Warriors by William R. Forstchen
The Game by Jeanne Barrack
The Sporting Club by Thomas McGuane
Beloved Strangers by Maria Chaudhuri
Life Eternal by Woon, Yvonne
Cécile is Dead by Georges Simenon
Our partner