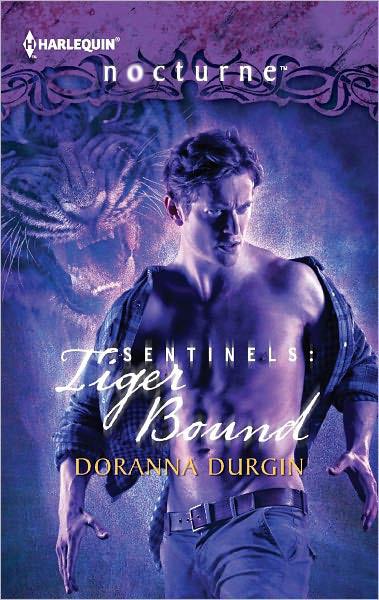 Like the Siberian tiger he can transform into, Maks Altán is a strong, ferocious fighter who’s incredibly protective of his Sentinel kin. But thanks to a debilitating injury, he feels anything but fierce. That is, until he is sent to guard Katie Maddox, a gorgeous healer who awakens a dangerous lust within him. Problem is, in the shifter world, Katie’s deer alter ego is easy prey…and much too tempting for Maks.

As unnamed danger lurks just beyond her awareness, Katie has doubts—about her abilities, her role in the Sentinels and the strange desire she feels toward her new protector. But somehow, the wounded predator and his wary prey must ignore their instincts, their fears and their dangerous attraction to each other in order to defeat their common enemy!

It was the desire that rose between them now, pushing back at Katie until she jerked herself free.

No.
Not free.
Hunger still washed over her skin, leaving a flood of warmth and fluttering sensation in its wake. It left her in thrall, aware of every whisper of air across her skin, every tingle of sensation. Maks lay heavy against her, leaving her aware of the soft flannel of his shirt, the muscle beneath, the breadth of his shoulders.

He was so big. He was
tiger.
What had she even been thinking, to haul him into her lap for healing?

What had she been thinking, to linger and to explore the whispering fugue of confusion clinging around him?

What the
hell
was she thinking, to look down into those green eyes and lower her mouth to his?

spent her childhood filling notebooks first with stories and art, and then with novels. After obtaining a degree in wildlife illustration and environmental education, she spent a number of years deep in the Appalachian Mountains. When she emerged, it was as a writer who found herself irrevocably tied to the natural world and its creatures—and with a new touchstone to the rugged spirit that helped settle the area and which she instills in her characters.

Doranna’s first fantasy novel received the 1995 Compton Crook/Stephen Tall Award for best first book in the fantasy, science-fiction and horror genres; she now has fifteen novels of eclectic genres, including paranormal romance, on the shelves. When she’s not writing, Doranna builds webpages, enjoys photography and works with horses and dogs. You can find a complete list of her titles at
www.doranna.net
.

To some extent, we’re born who we are. We’re formed and refined by our environment and experience, and if we’re smart, we never stop growing.

Maks Altán and Katie Rae Maddox know what I’m talking about. Both are Sentinels, humans born with an alter ego tied deeply to their souls—an alter ego that eventually expresses itself in shape-shifting. Circumstances led Maks to change early and often; he and his Siberian tiger are much more deeply integrated than most. Circumstances drove Katie to a heightened sensitivity of her Chinese water deer nature—a rare prey shifter that makes her way too vulnerable in the midst of a warrior-like Sentinel society.

They knew who they were, right from the start. The question is, what can this deer and her tiger become—together? And can they overcome not only their beginnings and their natures, but their shared enemy plans for them?

Stop by my Facebook page or blog, and let me know what you think!
www.dorannadurgin.com
.

To all the Wild Things.

M
aks clawed back to himself, hand braced against old brick, the quiet engine of a shuttle bus in the background...small-town street traffic passing nearby. Mortar crumbled beneath his fingers.

Not that he hadn’t known it when he’d talked his way back into Sentinel field status—even if no one else had guessed.

“Mommy, look at that man!” said a young voice, bright and curious. “Is he going to throw up?”

Maks opened his eyes, knowing it was too soon. Knowing that the red brick of the shuttle bus depot would strobe with his accelerated heartbeat, in and out of double vision, in and out of reality. He caught the merest glimpse of a little boy trotting away—pulled along a little too fast for comfort, casting a look over his shoulder, stumbling—

Maks growled. Softly, but a growl nonetheless—fighting the protective urge to pluck the boy up and away.

Not much of that lately.

Just as well that he could do no more than roll his shoulders against summer-warmed brick and focus on where he was and what he was doing here.

Katie Maddox.
That’s why he was here.

Maks closed his eyes, breathing in the scent of hot pine and astringent air...turning his head to the breeze as it fingered his hair.

Damn.
He stiffened, knowing from the doubt in her voice that the fugue still showed on him. Probably
in
him, and to judge by the dossier he’d studied between Tucson and this little high-altitude forest town, she could well see it.

Then see to it that it’s gone.

He played to the tiger within—a big cat in full stretch exuding lazy confidence and lurking strength. When he opened his eyes, there was a prowl behind them.

She recoiled a step. Light of foot, long of leg, perfect in balance—if she ran, she’d go far and she’d go fast. Her eyes widened, cinnamon brown, pupils big...straight brown hair with that same cinnamon tint spilling out of her doubled ponytail.

Yes. Katie Maddox knew he wasn’t right—quicker than anyone at brevis, she’d picked up on the growing threat from within him. And she knew, too, that he’d just seen the same in her—that she wasn’t the usual Sentinel. Wasn’t a hunter, a power-leashed protector...a predator.

No. Katie Maddox was prey.

She’d had years of practice. Years of growing up the only Southwest Sentinel who didn’t take the form of something big and fierce and powerful, armed with fang and claw. Years of being bullied, pushed around...dismissed and ignored. Until she’d retreated from the Sentinels, moving out to this tiny, high-country timber town to start her own small business and live life on her own terms.

She’d known he would be tiger. But she hadn’t known it would shine through from him to her unpredictable seer’s eyes—more than just chestnut hair with subtle black chunks nearly hidden in the shaggy nature of it, she could detect the hint of white at his temples that could well be mistaken for gray. More, too, than the size of him.

It was the intent in him. So completely quiet, and yet written there for the world to see.

But Katie didn’t run, no matter the impulse of the deer. Her legs might tremble faintly with the restraint and her nostrils might flare with the effort, but she held her ground.

Because Maks Altán, Brevis Southwest field Sentinel, was the only help she was going to get.

She took a step forward, held out her hand, and smiled just enough to show the faint reflection of her own
other—
faintly elongated canines rested against her lower lip.

Full-blooded field Sentinel, no less than he.

“Katie Maddox,” he said, and his voice came from his chest, faintly rumbly and unexpectedly gentle, softened at the edges. Leaning against the wall with his head tipped back, he was bigger than she’d thought at first glance—mainly because he wasn’t beefy, wasn’t exaggerated or barrel-chested or overly built. Long legs, broad shoulders, the muscle all to proportion.

Don’t think about it.

“I’m sorry I’m late,” she said, glancing around Pine Bluff’s shuttle bus depot. It was already empty of the few others who had disembarked with him in this high country cow town gone to vacation industry, smack in the middle of Sitgreaves National Forest. With fir and pine everywhere and more vacation cottages than homes, the entire town stretched along one winding road and a few offshoot clusters. They rated a big box store and a Dairy Queen, but not a bus route...just a shuttle winding its way down to the valley and back. Here, Katie provided therapeutic massage and physical therapy to sick and injured animals from the entire region. It was a modest living, but she
did
make a living. It didn’t hurt that she was a healer in truth, even if she was limited by the need to go unnoticed.

This
man would never go unnoticed. Not for long. It was another reason she’d been surprised to learn he was coming in on the shuttle. “I can’t believe brevis HQ couldn’t spare you a car.”

His glance sharpened, full of wild green. “The shuttle gives me time to think.”

“To read about me, I imagine,” she said, arms crossed in challenge before she thought better of it—and then couldn’t believe herself.
This
conversation was where she wanted to go with their first meeting? This man she wanted on her side? The man she’d quickly assessed as being so close to his tiger, and a Sentinel with enough field experience to dress in the all-natural clothing that would take the change with him, simply as a matter of course.

And still she challenged him—because she had to know where she stood with this man. “Brevis must have given you my file—what did you think after reading my history? A marginal seer having the vapors over vague portents? Just like always?”

She braced herself for the response—and got only a mild frown. He lifted his chin briefly, eyes narrowing—and she saw, then, the strength of the tiger in him. Could see in her mind’s eye the image of a big cat, making that vaguely impatient acknowledgment to something in its world.

“Whatever’s going on, brevis sent me to keep it from being a problem for you,” he told her.

Right. He probably didn’t believe her, but he had a job to do and he’d do it. Not as good as she’d hoped. Not as bad as she’d feared.

Except there was something else...lingering in the air, tickling at her healer’s instincts. Subtle and unfamiliar. She resisted the urge to shift a restless leg. So many little gestures, so many natural expressions, repressed in a world of Sentinel predators.

Set Me Free by Gray, Eva
Orchid Blues by Stuart Woods
This Girl Stripped by Dawn Robertson
Guns Of the Timberlands (1955) by L'amour, Louis
Harriet Wolf's Seventh Book of Wonders by Julianna Baggott
Vengeance 02 - Trust In Me by Lana Williams
Take the Long Way Home by Brian Keene
The Facades: A Novel by Eric Lundgren
Sexy In A Bottle: A More Than Men Novella by Laurence, Andrea
Crooked Hearts by Patricia Gaffney
Our partner