Read 'Till Death Do Us Part: Love, Marriage, and the Mind of the Killer Spouse Online

'Till Death Do Us Part: Love, Marriage, and the Mind of the Killer Spouse 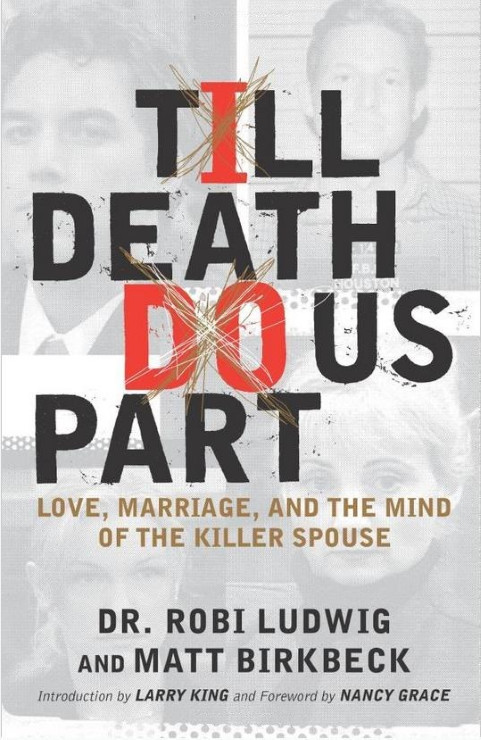 Till Death Do Us Part

Love, Marriage, and the Mind of the Killer Spouse

Photographs appearing in the insert are courtesy of The Associated Press.

All rights reserved, including the right to reproduce this book or portions thereof in any form whatsoever.
For information address Atria Books, 1230 Avenue of the Americas, New York, NY 10020

ATRIA
BOOKS
is a trademark of Simon & Schuster, Inc.

To my husband David Ludwig, who has embraced my dream like it was his own, which has helped me to become who I want and need to be.

To my parents Helene and Charles Shalotsky, who continue to model for me what a lifelong, loving, and successful marriage is and should be.

F
RIENDS
, we at
Larry King Live
follow and report on a wide variety of topics, from breaking world news to celebrity interviews. The murder of a spouse is among the topics that has always attracted intense viewer interest.

You’ll recall that America, and the world, was transfixed with a very prominent spousal murder case involving Scott and Laci Peterson, and we followed that case, and others, on my program from the very beginning.

It’s these kinds of cases, where there are allegations or evidence that one spouse unexpectedly turns violent toward another, that strikes at the hearts of viewers. With each new case we are mystified, frightened, compelled, and intrigued. Perhaps it’s because we are taught that family is supposed to be the rock of our foundation. Family is supposed to offer us comfort and security. But when that offer is rescinded, we want to
know what went amiss.

Why, we ask, in cases like Peterson, would a husband (or wife) kill his (or her) spouse?

What were the signs?

Could it have been prevented?

Dr. Ludwig is a psychotherapist and former reporter who has given millions of viewers an inside peek into the mind of the killer spouse, providing us with keen commentary and analysis. Through Robi’s valuable insight, she has helped us all to understand the violent actions and dark logic behind these murders, particularly since many of these cases appear to involve seemingly normal people.

In these pages Dr. Robi Ludwig goes even deeper into the psyche of the killer spouse, taking real-life cases and further expanding and explaining the motivations behind each murder, helping us understand why someone would commit this kind of crime.

F
OR
years I have known Dr. Robi Ludwig. Not only have I known her, I have disagreed with, argued with, listened to, and most important, learned from her. Her unique perspective, grounded in the principles of psychotherapy and the study of human behavior, has brought a new meaning to the analysis of trials and the behavior, motives, and testimony of witnesses, victims, and defendants alike. A trial lawyer’s duty is to learn the facts and law of a case; a prosecutor’s duty is to seek a verdict that speaks the truth; and a defense lawyer’s duty is to obtain an acquittal for the client on trial. Dr. Robi Ludwig explains the “why” behind each of these.

While the state is not required to show a motive in order to prove its case, juries often search for this missing piece of reasoning. Dr. Robi not only studies the human mind and behavior, but breaks it down in terms of actual cases; cases that engage us, challenge us, make us angry, and make us cry. Yes, a jury can convict, a judge can sentence. But what good are verdicts if we fail to learn from them? This is the greatest of many reasons that I have highlighted Dr. Ludwig’s in-depth and intuitive analysis on Court TV as well as CNN over and over throughout the years. She casts light on the formerly taboo subjects of marital strife and homicide.

In the Scott Peterson case, Dr. Robi Ludwig analyzed, I believe correctly, the motivations of Peterson himself, as well as various police officers, neighbors, attorneys, and family members. Who could ever forget the bombshell testimony, tapes, and court appearance on the witness stand of Peterson’s lover, Amber Frey? The angry Lee and Jackie Peterson, blind to the evidence before them? The suffering of Sharon Rocha? The charming guile of Scott Peterson? And the reasoning behind the jury verdict? Dr. Ludwig accurately weighed in on each, clarifying what we observed in the courtroom.

I remember distinctly the night Robi and I sat quietly in a darkened studio, guests together on a
Larry King Live
broadcast. We were discussing the Peterson trial after hearing that homicide was the leading cause of death among pregnant women. The number-one cause of death? I couldn’t believe my own ears! After all the domestic homicides and domestic assaults I had prosecuted, I was unaware of that astounding and heartbreaking statistic. In the weeks following, Dr. Ludwig began to make sense of this shocking statistic that plagues our nation.

But long before the Peterson case, Dr. Robi Ludwig was speaking out regarding marriage and murder. From Rabbi Fred Neulander, on trial for arranging the murder of his longtime wife Carol, to the murder trials of Dr. Richard Sharpe and novelist Michael Peterson, Dr. Ludwig has become the authority on marital homicide, its causes, its far-reaching implications, and the devastating wake of pain it causes.

The depth and insight she brings to the table has broadened my understanding of these heinous acts, and of the underlying darkness that is often inherent in so many marriages. Dr. Robi enlightens us all.

E
ACH
day six people are murdered in the U.S. by a spouse or “intimate partner.” Another twenty-seven hundred people daily, or almost a million per year, are physically assaulted, victims of what the U.S. Department of Justice calls “intimate-partner violence”—violent crimes such as assault, rape, and robbery perpetrated by spouses, boyfriends, and girlfriends.

Over the years many of these cases have attracted national notoriety through extensive coverage on CNN, FOX, MSNBC, Court TV, daytime and cable talk shows, the Internet, and newspapers as millions of viewers and readers try to understand why one spouse would kill another.

From David and Clara Harris to Scott and Laci Peterson to O. J. and Nicole Simpson, Americans are fascinated by behind-the-scenes stories of spousal violence. And with each new case and the continual media coverage and fascination it draws (the Peterson case was an international phenomenon while the Harris case, in which she repeatedly ran over her husband with her car, was also reported around the world, and spawned twenty-four-hour coverage, several magazine articles, a book, and even a CBS-TV movie,
Suburban Madness
), we become immersed in another form of reality TV—where the average citizen is taken deep inside the personal lives of husbands and wives to see firsthand what’s gone terribly wrong in real time, from tragic event to trial.

Why the intense interest?

Perhaps because most of us, whether we admit it or not, sometimes have violent, even homicidal thoughts toward our spouse or intimate partner. While the majority never act on those thoughts, others do, and we are fascinated with these crimes and want to understand how seemingly normal, and in many cases flourishing, lives could unravel in such devastating ways. On another level, violence is a dark contrast to what so many of us still believe in—love, and the ideals and promise that marriage affords us.

Like many people, I consider myself an incurable romantic, and there is a part of me that will always believe in walking off into the sunset to live happily ever after. When I was younger, like many children, I assumed I would get married, live in a nice house, and have a couple of kids. I also assumed this very traditional achievement would bring me endless happiness and romance. So much so, that during my college years I considered girls engaged by graduation to be the epitome of success. Perhaps needless to say, I was not one of those girls.

I remained single through my twenties, and the thought of being single in my forties scared me. I simply couldn’t imagine how anyone that age could live a happy life if she had yet to find her Prince Charming. To me, a woman in that situation seemed so…alone, and I equated marriage with all that was good and passionate in life. Of course, I knew that not all marriages were healthy or fulfilling, but I did believe that if one chose properly, her romantic ideal was just a careful selection away.

I eventually found my “romantic ideal” in David, a successful New York physician. We have two beautiful children and my husband and I have busy, hectic, and fulfilling professional and personal schedules. But during our time together my image of marriage has become more realistic: Marriage is not perpetual bliss. It’s a work in progress. But knowing that hasn’t changed the high priority I place on achieving a successful marital relationship for myself, as well as for my patients.

One of my specialties as a New York–based psychotherapist is creating healthy relationships. During my professional career I have found human interactions one of the most interesting and challenging aspects of my practice. One of my goals is to help my patients understand and support human connections and the contributions they make to a fulfilled and joyful life.

While my career as a therapist focuses primarily on the unifying aspects of relationships, I have become, in recent years, an expert on the deadly relationships, expanding my early career as a television reporter to discussing these cases, and the motivations behind them, before millions of television viewers who often wonder and ask the most obvious question: Why do these cases make their way into the public consciousness and permanently reside there?

It’s not just due to voyeurism or an attraction to true crime. The root of the interest in these cases becomes apparent when one listens to the types of questions asked by the many callers who phone in, seeking answers.

“Robi, how could such a normal-seeming guy be driven to kill his pregnant wife?”