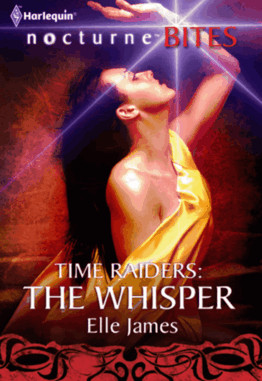 Air Force officer Marisol Vasquez was chosen for a dangerous time-travel mission for her ability to see through the eyes of animals. Sent back nearly six hundred years to the Incan empire, she’s committed to finding the precious alien artifact she’s been assigned to recover.

But Marisol’s mission hits a snag when she’s given as a gift to the emperor’s shaman, a mysteriously sexy man who is determined to seduce her. Suddenly Marisol’s devotion to her task faces an entirely unexpected threat: the hazard of fierce, all-consuming lust….

Fifty thousand years ago, after discovering that human females carried a nascent genetic potential that might one day develop into the ability to star navigate, The Pleiadian Council planted a dozen pieces of a bronze disk across the Earth, hidden in darkness until mankind advanced enough to travel through time and find them.

And then, out of the ashes of the mystery-shrouded Roswell Alien crash in 1947 arose a secret research project called Anasazi. Its improbable goal: learn to use the recovered alien technology for the purposes of time travel. General Beverly Ashton was the last to command this project before a dozen time travelers were inexplicably lost and the project disbanded.

However, the recent discovery of an ancient journal, known as the
Ad Astra
, has given Professor Athena Carswell the information she needs to begin sending modern time travelers back through human history in search of the twelve pieces of the Pleiadian medallion which, when fully reassembled, will send a signal to the Council indicating mankind is ready to be introduced to the rest of the galactic community.

Project Anasazi has secretly been reactivated, and General Ashton, now retired, and Professor Carswell are continuing the project’s work. They are carefully recruiting and training a team of military men and women to make the dangerous time jumps.

But threats loom on the horizon, both from humans who would see the project ended—or worse, steal its work and use it for nefarious ends—and from the Centauri Federation, which will do anything to stop humans from learning how to navigate the stars….

Marisol Vasquez fell into a grassy field feetfirst. Though she’d done everything she’d trained for in the Air Force Pararescue unit she’d been recruited from, the landing knocked the wind out of her.

She lay for a moment, rocks pressing into her sides, the colorful, woolen native dress she’d been given to wear hiked up around her thighs.

With her pulse pounding in her ears, she felt for the bracelet that was her only link to the twenty-first century, her only way back to her world, her time, her life. Not until her fingers wrapped around the cool metal did she breathe a sigh and push to a sitting position to take in her new surroundings.

The field was a small plateau nestled in the Peruvian Andes near the Urubamba Valley of what she knew to be South America. Below her stretched the center of the ancient Incan Empire, the divine city of Cusco, founded and expanded by the great Incan ruler Pachacuti.

Marisol stood up, her gaze taking in the view of the sprawling city below. Spread out before her, bigger than she’d ever imagined, was the reason for her journey across time and distance. She found Cusco’s sheer size and density to be much more intimidating than she’d originally anticipated. For the first time since Marisol had agreed to this extraordinary mission, she wondered if she was in over her head.

She’d traveled from Arizona to Peru and over five hundred and sixty years back through time in the blink of an eye. Marisol was a highly trained Air Force Combat Rescue Officer with a special ability to communicate with animals and “see” through their eyes.

“Now all I have to do is walk right into the city, locate Pachacuti’s palace and find what I came here for. Easy, right?”

“Depends on what you are looking for,” a voice said behind her.

Marisol spun toward the voice, crouching in a fighting position. Sure of only one thing—the language translator implanted behind her ear was working.

A man lounged across the lush green grass, a woven cloth spread with a variety of fruits, cheese and bread arranged before him. What struck Marisol wasn’t that he was a man but that he wasn’t what she’d expected to see in Pachacuti’s Incan Empire.

He wore sandals and a short wool skirt that exposed amazingly thick thighs. His top half was bare but for two large gold bands around his upper arms. He had a bright red cape slung across shoulders so broad they could have easily filled any modern doorway.

Marisol gulped at the breath catching in her throat.

It wasn’t his clothing or his jewelry that took her aback. The long, white-blond hair hanging past his shoulders and his ice-blue eyes captivated her. Where had this Norse god sprung from? The Spaniards weren’t due to arrive for several more years and even they weren’t as pale as this man who was a freak among the dark Incas.

“Who are you?” Marisol wondered if she’d landed in the wrong time or place.

He raised his eyebrows. “You are the intruder to my peace. Perhaps you should be so kind as to gift me with your name, first.”

Seeing no reason to withhold her identity, she answered, “Marisol Vasquez.”

The man tipped his head in a regal manner, a smile twitching his lips. “I am Gunnar.”

“That tells me a lot.” She cast another glance around at the hillsides and the metropolis stretched out before her. “Am I right in assuming that the city below is Cusco?”

“You are correct.” He remained in the supine position, tossing a mango in one hand.

“What business have you with the Incan ruler?”

Gunnar nodded. “Everyone in the land knows of the great Pachacuti. It surprises me that you must ask. Are you a stranger from a foreign land?”

“Ah, yes. To find something.” He plucked another fruit from the assortment on the blanket in front of him. The muscles in his arm and shoulder rippled, sending corresponding waves of awareness through Marisol. His full sensuous lips closed around the fruit as he bit into the flesh.

Mesmerized by the slow, deliberate tasting, Marisol could only watch as the man called Gunnar consumed the sweet, his jaw moving as he sucked the juices out of the fruit.

An image of those lips caressing her nipples flashed through Marisol’s mind, knocking her back a step. She shook herself, forcing back any sensual thoughts of the stranger, his lips or the fruit he suckled.

Long, broad fingers twirled the half-eaten fruit in his hand, his gaze on what he held, not her. “You will not get into the palace by walking in. There are guards at every entrance.”

She suspected the palace of a ruler would have tight security, but hearing a stranger tell her she couldn’t do something, coupled with her unwanted desire, got Marisol’s hackles up. “You don’t know how determined I can be.”

“As a woman, you’ll be challenged unless you have a proper escort.” He sounded bored, unconcerned about whether or not she’d gain entrance into the ruler’s inner sanctum.

Marisol wasn’t certain she could trust this stranger who seemed all too willing to share the palace details. Was he an enemy to the great Pachacuti? “Are you volunteering to be my escort?”

“Not at all. However, an escort is needed and if you want one, I do know how you can attain one.”

She crossed her arms over her chest. “Please, the suspense is killing me.”

His eyes narrowed. “Rather the suspense than the guards, pretty lady. They can be quite merciless to women of the Incan Empire.”

Marisol clenched her fists. She’d anticipated the lowly role of women in Incan society. Men ruled, women were relegated to day-to-day household chores, farming, general labor or sexual consorts. Some were not as fortunate, offered up as sacrifice to the deities the Inca worshipped.

Taking a deep breath, Marisol forced her voice into a pleasant tone that unfortunately bordered on insolent. “How can I enlist the assistance of such a fine and trustworthy escort?” Just because she found the man extremely attractive, she didn’t have to like him.

Marisol was all about the mission. The distraction of a man with the body of a Norse god wasn’t in the plan. Once she ditched the diversion, she could continue with her mission.

The man nodded his blond head toward a road below. The artery led from deep in the mountains down into Cusco. A group of men led llamas laden with bundles and baskets. “Those men are from the northern
suyu,
bearing gifts for the emperor.”

Marisol glanced down at the group. “You think they will agree to be my escort?”

Marisol glared at Gunnar. “Then why did you bother to mention them?”

“Do you see a young woman with them?”

“The leader of the
suyu
sent word to Pachacuti that he was sending gifts to the emperor.”

“One of the promised gifts was a woman of great beauty and purity.” Gunnar’s lips quirked. “Rumor has it the warriors escorting the ‘gift’ lost her. Or rather, she ran away.”

“Good for her,” Marisol said before she could stop herself. She clapped a hand over her mouth, reminding herself she wasn’t in the twenty-first century. Men of the fifteenth-century Incan Empire wouldn’t respond well to a strong-minded woman.

Again, Marisol wondered if she was the right woman for the job. Perhaps they should have sent a man. Men had more flexibility and maneuverability in the Incan culture.

“Are you suggesting I volunteer for the job?” Marisol’s eyes narrowed.

The Norseman stood, tossed the remaining fruit to the side and gathered the corners of the wool blanket, folding it over his arm. “If you want to get into Pachacuti’s inner circle, what better way than as a gift?” He nodded toward the men below. “Look, they are stopping to discuss their options. When their leader learns of their failure, they could be sentenced to death.”

Marisol found it hard to feel sorry for the warriors. What would Pachacuti have done with the beautiful virgin? Offer her as a sacrifice in some barbaric ritual? She stared down at the group of Incan warriors gathered in a circle, their voices rising with their anger.

“But I’m not a virgin.” She knew it, but would they? Probably not. If she wanted to get into the palace, this was as good a solution as any. She’d figure out how to avoid being sacrificed once she was in. Marisol sighed. “So, how do you propose I go about offering myself up as a ‘gift’?”

Dangerous by Shannon Hale
Like it Matters by David Cornwell
What's Your Status? by Finn, Katie
Stepping Down by Michelle Stimpson
Hearts of Fire by Kira Brady
Dead Days (Book 1): Mike by Hartill, Tom
You’ll Understand When You’re Dead: Broken Heart Vampires Book 12 by Michele Bardsley
One Moment, One Morning by Sarah Rayner
Bad Moon Rising by Maberry, Jonathan
The Sound of Letting Go by Kehoe, Stasia Ward
Our partner