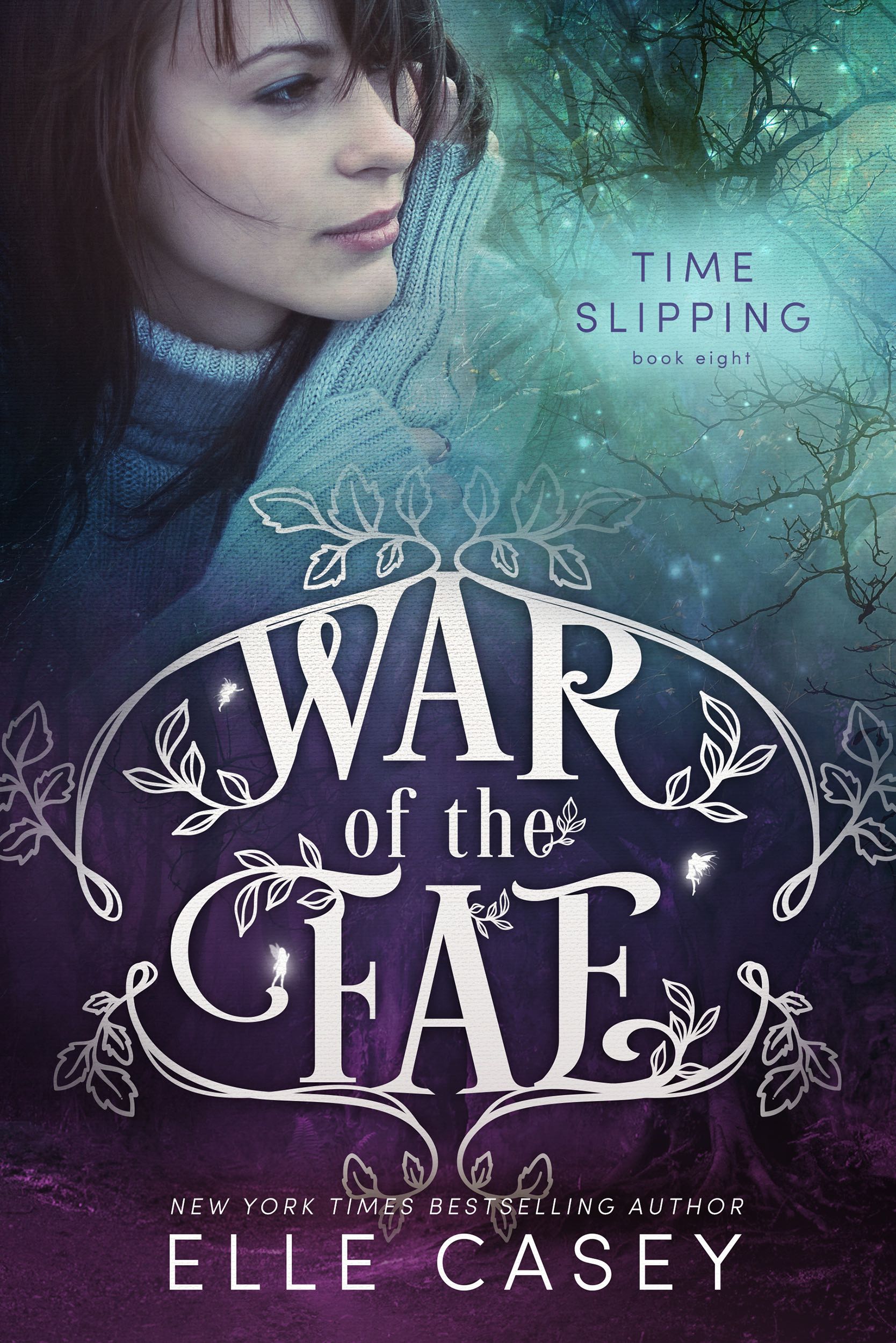 War of the Fae

Being an independent author, I depend entirely on
you
, the reader, to get the word out about my books. If you liked this book, won’t you please leave a review online and recommend it to a friend? The more you spread the word, the more books I can write, and nothing would please me more than to put a new book in your hands every single month!

Jayne and her crew of fae friends are off to
Uamh An Ard-Achaidh
, the High Pasture Cave in Torrin on the Isle of Skye, to fulfill her destiny as the companion to the portal guardian of the Underworld. But on the way there, weird things start to happen, and she’s forced to reckon with at least one behind-the-scenes player bent on keeping her from getting to the portal on time.

Want to read more of my books?

Please ask your friendly librarian to add more of my books to your library’s collection
!

Want to get an email when my next book is released?
Sign up here:

OTHER BOOKS BY ELLE CASEY

*Book 1, The Changelings, is a free ebook at most retailers*

Ten Things You Should Know About Dragons
(short story, The Dragon Chronicles)

Dark Beyond the Stars Anthology)

ROMANCE
All the Glory

For the Ellementals who inhabit the Inner Sanctum.

I STARED AT THE VAN that was meant to take us from the Green Forest and the fae compound that had been my home for almost a year, to
Uamh An Ard-Achaidh
, the High Pasture Cave in Torrin on the Isle of Skye, near Scotland.

“I hope nobody expects me to drive that hoopdie,” I said, eyeing the car with British license plates suspiciously.

Jared pointed the key at it and pressed a button to open all the locks. “What’s wrong with it? It’s perfectly safe.”

Before I could open my mouth to explain that the steering wheel was on the wrong side and the front of it was so squashed it looked like a pug, Tim, my pixie roommate, spoke up and cut me off.

“Safe? Not with Jayne behind the wheel it wouldn’t be.” He flew over to stand on the roof rack that was already loaded down with the supplies we’d need to set up household somewhere on the Isle of Skye. “Talk about a death trap. Did you see her in the dining hall last night? She can’t even navigate on her own two legs.” He snorted after that and then immediately calmed down when he realized it was messing up his hair to get too excited over his own jokes. He pulled his comb out of his fanny pack and slicked it through his ‘do.

I glared at him as my friends watched us with bemused expressions on their faces. They knew he was giving me crap, but they couldn’t hear a word of it.
Lucky them.

“I stepped on a spelled banana peel,” I said in my defense, looking over at my cousin, Samantha. She was acting totally innocent, but I knew better. When I told her a couple months ago I wanted her to help me get prepared for sneak attacks, I had no idea that she’d take it so literally. I’d gotten better at anticipating her little surprises and throwing up bubble shields of elemental Green power to protect myself, but I still had a lot to learn about tricky witch bitches and their sick senses of humor.
A banana peel, Sam? Seriously?

She shrugged. Somehow, over the past few months, she’s managed to tune into my brain’s wavelengths. It wasn’t that she read my mind exactly, but she did seem to know when I was pissed at her. Not that it made one iota of difference when she was making decisions about whether to mess with me or not. She was one of the few people in our fae world who didn’t fear me in the least. Probably because she was as powerful as I was, only in a different way. Fated Fates had some crazy magic mojo going on for sure, even when they didn’t want to be one.

Most of my friends who came with me to the Green Forest from Miami as humans and the friends I made after arriving were all just a little nervous about what could happen if I woke up on the wrong side of the bed. From the beginning of my tenure as Mother to the fae, the elemental who commands Earth and Water, I’ve admittedly done a pretty good job of accidentally putting people in comas, sending arrows through the forest at supersonic speeds over vast distances and burying them in places they shouldn’t be buried, and generally raising hell. Like,
literally
raising hell. We’d only just gotten the last demon back into the Underworld where he belonged. But still … I hadn’t blasted anyone recently who didn’t deserve it, so their fear was totally misplaced, according to me. Besides Sam, the only other fae not afraid of me were Tony and Spike, and they probably felt that way because they knew how much I loved them both. I’d rather die than hurt either one of them, even just accidentally.

My hand moved almost involuntarily to my hip where the hilt of my demon sword rested. As luck would have it, Samantha wasn’t always a pain in my ass. Her magic had grown in power just like my skills had, and she’d invented a nifty spell that turned my giant bedazzled demon sword into what looked and handled like a small dagger when there were no bad guys around. But the minute someone pissed me off or threatened either my life or the life of someone I cared about, watch out; that demon dagger got a serious boner and turned into a giant sword like no other. I giggled just thinking about it.

Tim looked over at me and noticed where my hand was. “You’re laughing about the dagger boner again, aren’t you? It’s really not that funny.”

“Says you.” I walked over and waited my turn to get into the van.

“Says anyone who’s seen you in action with that thing,” he countered, buzzing over to land on my shoulder. “That weapon is no laughing matter. Lest ye forget … I saw that orc’s nutsack lying on the ground that your
boner sword
sliced and diced right off the poor beast. I mean, I’m no fan of the orc, but seriously, Jayne … the jewels should be off limits, no matter what the enemy’s race is. I’m scarred for life.”

I reached up to flick him in the butt, but he easily avoided me. It wasn’t that he could read my thoughts, but he’d been on the business end of my flicking finger close to a million times by now and could easily figure out when and where the next one was coming from. He deserved every single one of them. The last thing I needed right now was to be reminded of that severed nutsack.
Shudder.

“So Willy’s not coming, right?” Scrum asked, distracting me from my retribution. My daemon friend was looking at my backpack with way too much concentration.

“I already checked the pockets three times. He’s not going to hitch a ride this time.” Like I needed his pixie momma up my butt over that again. Accidentally taking him into the Overworld last year when we went dragon hunting was one of my worst screw-ups to date. I was hoping we could avoid any of those fiascos for this trip. It wasn’t like I didn’t already have enough pressure on me being the portal guardian’s companion or anything.
Dragons are like really big Saint Bernards, right? Oh, God, I think I’m going to be sick.
I reached my hand out and rested it on Tony’s shoulder to steady myself.

He patted it, giving me a brief smile before walking away to open the door on the other side of the van for his girlfriend, Felicia, succubus extraordinaire.

“He’s with Abby, don’t worry,” Tim said. “She has him on lock-down until we contact her and let her know we’re too far away for him to find us.”

“She’d better.” I looked over at Sam. “Do you sense any pixies here, other than Tim?”

She shook her head. “I spelled the path. He’ll never make it this far.”

Tim’s head swiveled around in a flash. “She’d better watch that witchy bitchy stuff with my boy. You know I won’t stand for any nonsense. He needs those wings. Without them, he’ll be grounded, and you know what that’ll do to the entire fae community. I’ll get blamed for it, you know I will.”

Willy was known as the most energetic pixie baby in the entire Green Forest, and that’s saying a lot since now all the pixies who were formerly relegated to pixie colonies have come back. When Tim wasn’t preening over the compliment he assumed that to be, he was pulling his hair out trying to keep a rein on the kid. The one time Willy had become grounded through a spell gone awry, everyone had paid the price. For a month we all suffered sore eardrums from his whining, severe sleep deprivation, and not to mention stuffed up noses from him crawling up into beds and stuffing pollen in our nostrils. No one can raise a ruckus like a grounded pixie, that’s a fact.

Sam stopped what she was doing and glared at him. “Is he accusing me of something?”

Tim flew up into my face, his eyes bugging out. “Do you like watching witches pluck the wings off pixies? Is that your problem? You’re sick, you know that? Sick.” He flew backwards around the van, giving me the middle finger on the way.

“Did he just flip you the bird?” Finn my green elf friend asked. “It’s kinda hard to see with his fingers bein' so tiny ’n all, but dang. He looks p.o.ed.”

I shrugged. “He’s just cranky because he has indigestion. You know Tim.”

Now the little punk was inside the van doing blowfish maneuvers on the window glass, too distracted by the opportunity to make a fool of himself to listen to me bring up his gas problems. Normally, it’s a surefire way to get his undies in a twist.

“Okay, everybody in,” said Jared, head daemon and pretend teacher in charge of our pretend school going on our pretend field trip. It was the best cover the fae council could come up with for our appearance on the Isle of Skye as a group of teenagers not in school during the time of year when we should be.