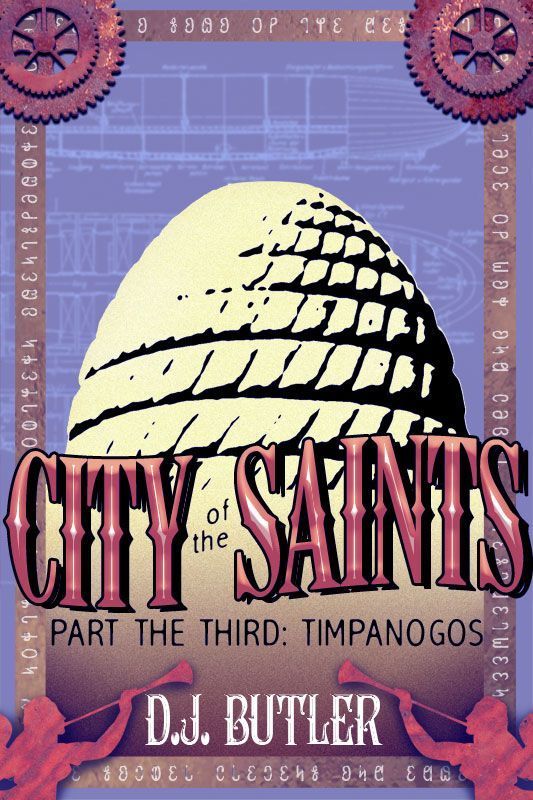 City of the Saints, Part
the Third

I worked hard to produce this book.

Pirating this book means stealing from
me; please don’t do it.

City of the Saints
is
an adventure in four parts:

Part the First is
Liahona
.

Part the Second is
Deseret
.

Part the Third is
Timpanogos
.

Part the Fourth is
Teancum
.

If you like
City of the Saints
, you might also enjoy
Rock Band Fights Evil
, my action-horror pulp fiction serial.

Rock Band #1 is
Hellhound
on My Trail
.

“Shoulda got a knife,” Jed Coltrane grunted to himself as he
sprinted.

Even a pistol would have done nicely,
or a carbine with decent aim.

But
the aim on the machine-gun wasn’t good enough to hit the wiry Irishman.

Not without hitting the boy, too.

Not without getting a lot closer.

When the hotel had collapsed, O’Shaughnessy had looked back,
once.

Jed had watched him assess
the situation from his perch inside the stable door, then turn and shuffle
quicker down the hill.

Jed
couldn’t see where the Irishman was headed, other than the weeds and scrub oak
at the bottom of the long yard.

For once, he wished he were a taller man, with a taller man’s vantage
point on the situation.

No amount of wishing would make him grow an inch, though.

So he sprinted down the hill, trying his best not to be
heard.

He knew there was a perfectly good question that was dying
to be asked, which went something like,
Jed Coltrane, are you out of your
damned mind?

What are you doing
risking your life for this kid, and he ain’t even yours?

He didn’t ask the question, though.

Once he started asking questions like
that, it seemed to him that there wouldn’t be any point to any of it.

If he couldn’t save an innocent little
kid, what was the point of trying to stop wars anyway?

Or win them, for that matter.

So he just ran.

Jed crested the slope of the yard enough to see the little
two-roomed springhouse at the bottom of the hill just as the Irishman reached
it.

Two men in black coats stood
before the building, holding rifles in front of their chests and looking nervous.

O’Shaughnessy looked up the hill and pointed at the hotel.

The two men looked up, saw Jed and raised their rifles.

The dwarf threw himself onto his belly,
fumbling to raise the machine-gun into attack position—

but the Irishman drew his weapon first, the silent gun of
the Pinkertons—

and shot both the springhouse guards in the backs of their
heads,
zip! zip!
, as neat as you
please.

They fell, pink clouds
drifting around their faces.

A cloud of black smoke from the gun swallowed Jed, filling
his nostrils with the brimstone reek of hell and death.

The bird-headed thug ducked, crouched, and picked up John
Moses.

“Damn!” he cursed, and scrambled forward down the hill, half crawling,
half tumbling, fighting not to lose his grip on Jonathan Browning’s gun.

The Irishman raised his firearm again and shot at the
springhouse door.

A shattered padlock fell to the ground.

O’Shaughnessy stepped around behind the corner of the
springhouse, still holding John Moses in front of him like a shield.

“Stay inside, Sam!” he shouted, and
fired again at Jed.

Bullets whipped through the tall yellow grass around the
dwarf.

So that’s the way of it, he
thought.

Well, if the Irishman was
concerned about Sam Clemens, that gave Jed Coltrane a little lever to pull on.

He pointed the machine-gun at the springhouse and squeezed
the trigger until the drum was empty and the hammer clicked on an empty chamber.

Smoke enveloped him as he fired.

Wood chips and sawdust sprang off the rough log exterior of
the springhouse like it was the inside of a sawmill.

There, he thought smugly.

That ought to flush the ugly Irishman out.

“No!” O’Shaughnessy screamed, and charged forward—

knocking the boy John Moses aside as he did so—

Jed and O’Shaughnessy were ten yards apart, and Jed realized
his miscalculation—

Jed’s gun was empty, but O’Shaughnessy might not know
it.

He raised it to his chest,
meaning to bluff—

on an empty holster.

“Fookin’ hell!” he shouted, and whirled around to face the
boy John Moses.

John Moses stood calmly, holding the silenced pistol in both
hands, pointing it at the Irishman.

“Give it up, you stupid Mick!”

He sprang across the stream, coat flapping out behind him
like a peacock’s tail, and crashed into a thicket of scrub oak trees.

He sprinted to the springhouse.

“Give me the gun, John Moses.”

John Moses shook his head and pointed the Maxim at Jed.

“I don’t want you to kill him,” John Moses said
stubbornly.

“Dammit—” Jed reached for the gun, and John Moses
raised its muzzle, aiming straight for the dwarf’s forehead.

Jed
briefly considered reloading the machine-gun, but that was a tedious,
time-consuming task, and the weapon was heavy, and the Irishman was getting
away.

He dropped the gun and
shrugged out of the bag carrying ammunition.

“Thanks for the loan,” he said, and he rushed into the oak
on O’Shaughnessy’s trail.

Absalom stopped running in a grove of cottonwood trees.

Well, not a grove.

Three trees standing together at the base of a long hill.

He wasn’t sure where he was exactly,
but, approximately, he thought he might be somewhere north of the Hot Springs
Hotel & Brewery and downhill of the highway back to the Great Salt Lake
City.

The mountains were on his right hand.

“Absalom, Absalom!” he heard behind him.

He threw himself in among the trees for protection, held his
gun high, in as manly and determined a fashion as he could, conscious that in
his effort to look the hero, he might instead have made himself the fool.

When he felt appropriately composed, he
looked back.

Abigail raced towards him through the little gulley down
which he’d come.

Each
woman held her skirt high with one hand and pointed a pistol at the sky with
the other.

They looked silly, and that made him feel a little calmer.

He was careful not to laugh as they
caught up to him.

His heart thundered in his chest like it would never end.

“I was looking for decent cover from
which to continue the attack.”

He
laughed his best baritone laugh.

Fog of war, uncertain terrain, all that.”

“Are you wounded?” Abigail asked.

“That was an impressive charge, Mr. Fearnley-Standish,”
Annie added, catching up and stopping, but still clutching her skirt up over
her ankles.

Her
shapely
ankles, Absalom couldn’t help noticing, even through
her almost knee-high boots.

“Only
Mr. Burton charged with you, I saw.

The rest of us took cover.”

Absalom vaguely remembered Richard Burton running past him
and into the building right in the teeth of the Danites, and realized that
Annie must not have seen the events very clearly.

He coughed with as much humility as he could muster.

No one else was running down the gully,
the gunfire had stopped, and he had no idea what was happening at the hotel at
that moment.

“Of course, after the
initial charge, I thought I should take cover, as well.

No sense running to meet a pointless
death, is there?”

“You Brits are either the bravest men I’ve ever seen, or
you’re stark raving lunatics in need of incarceration.”

“Yes,” Absalom agreed, but then kicked himself for the
insipidity of his answer.

That wasn’t quite right
either, and he tried to make up for it by grinning his most piratical grin, but
that just made him feel silly.

He
wanted to be a lunatic, stark raving mad from sheer courage, like the infernal
Burton, so that Annie would like him.

Sadly, he knew he wasn’t cut from the right stuff.

“Are you wounded?” Abigail asked again.

She dropped her skirt and balled her
free hand into a fist on her hip.

Her voice sounded dangerously flat, and Absalom wasn’t sure how to read
that.

Her question reminded him of
the reason he’d come to Deseret in the first place.

“But the Danites appear to have occupied your hotel, and all the
shooting has probably destroyed the building.

Will you come home with me now?”

She slapped him in the face.

“You idiot!” she snapped at him.

“I’ve come back here for my husband, not for the damned
building.

Orrin Porter Rockwell is
my man, and I mean to stay with him!”

She looked surprisingly compassionate, so much so that
Absalom half-hoped his sister
would
hit
him again.

“No need to curse, ladies,” he mumbled.

Behind him, a big Strider crouched, lowering its carriage
close to the ground.

Absalom found
himself staring down the barrels of large-bore guns, and he raised his own
pistol to shoot at the attackers, trying not to cringe too visibly.

If he had to die, he didn’t mind that
it was a heroic death, defending two women—

Annie spun like a top, throwing her leg surprisingly high
into the air and kicking Absalom’s borrowed pistol out of his hand.

He was about to ask
what did you do that for?
when the gunner snapped open the smoked visor of her
helmet and revealed herself as Master Sergeant Jackson.

“Thank you,” he added, trying to
recover his dignity.

“Sometimes my
reflexes are entirely
too
quick.”

“Joo’ve got killer espirit, Meester Top Hat,” Jackson called
out over the chugging of her big machine.

“But joo’ve got to get a little more control de tu mismo.”

Absalom was no Spanish speaker, and the gunner’s words
baffled him slightly.

Had she just
advised him to control his detumescence?

Anyway, she was smiling, so he smiled back.

“I’ve found control to be an overrated quality, myself,”
Annie responded.

She stared
fiercely at the Mexican Striderwoman, and something about her stance made
Absalom think she might jump up on the vehicle and kick Jackson.

He found the prospect surprisingly interesting.

“Joo’ll find that it’s more important, when joo have a
bigger gun,” Jackson shot back.

She patted the barrel of the big weapon in front of her.

“Get in,” she told Absalom, hitching up her skirt and clambering up the
Baba Yaga legs of the Strider.

She
climbed like a bear, Absalom thought, with muscle and purpose but no
poise.

Absalom recovered his pistol and brought up the rear, trying
not to embarrass himself in front of all the ladies.

The driver at least, he noted with some relief as he hoisted
himself up into the carriage and dropped onto the rumble seat, was a man.

His visor was up and he grinned at
Absalom under an oiled mustache.

“Where are we going?” Absalom asked.

He wasn’t sure he cared very much.

He had found Abigail, and was still
trying to persuade her to leave Deseret with him, and he wasn’t in much of a
hurry to accomplish anything else.

Also, he found that he enjoyed being surrounded by women who were
quarreling over him.

“Back into
the battle?”

Ándale!” she barked at the pilot.

Spirit Journey: Historical Western Cowboy Romance Novel (Dawson Chronicles Book 3) by Linda Bridey
Fate Of The Minotaur (Her Dragon's Bane 5) by Harmony Raines
A FUNNY THING HAPPENED ON THE WAY TO MY STRESS TEST by Gari, Brian
01. Midnight At the Well of Souls by Jack L. Chalker
Dracula (A Modern Telling) by Methos, Victor
Two-Step Temptation by Emma Jay
Lucky Strike by M Andrews
Constantine's Sword: The Church and the Jews by James Carroll
El Paso Way by Steven Law
A Metropolitan Murder by Lee Jackson
Our partner