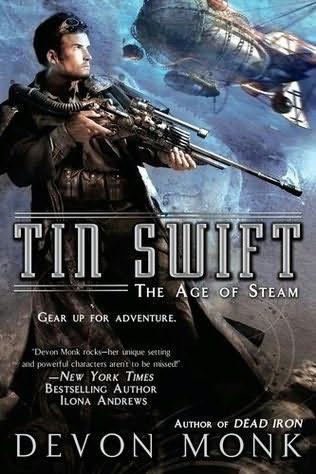 “Featuring a cursed hero, fabulous secondary characters, a world torn between machines and magic, and a plot that hooks your interest from the very first chapter,
Dead Iron
is a must read.”

“A relentless Western and a gritty steampunk, bound together by wicked magic. The action is superb, the stakes are sky-high, and the passion runs wild. Who knew cowboys and gears could be this much fun? Devon Monk rocks—her unique setting and powerful characters aren’t to be missed!”

“A novel and interesting take on the steampunk tropes, with generous nods to other genres, and plenty of odd but human characters and Mad Science.”

“Werewolves, witches, and creatures of both flesh and metal clash in a scarred land stitched together with iron rails—a steampunk world so real I could almost smell the grease and hear the gears grind. Beautifully written and brilliantly imagined, Devon Monk is at her best with
Dead Iron
.”

“A magical steampunk history of the Pacific Northwest … this is a magnificent tale of Edenic mountains, steam-powered assassins, deathless love, and transformation. Fast-paced, tricksy, turning from one extreme to another, the reader will be drawn ever deeper into the ticking, dripping iron heart of this story.”

“Powerful and action-packed, Monk’s pacing is hypnotic, sending the reader into a Wild West that is as wired as it is weird. Keenly crafted characters and a deftly depicted landscape make this an absolute must read for fans of either Monk or steampunk.”

“The mix of magic and steampunk worked very well. … Curses, magic, werewolves, zombies, and the Strange … they were all fascinating.”

“The steam age America that Monk has created for this series is ingenious. … The Old West world is harsh and beautiful and the steam devices plentiful and fascinating.”

“Monk’s entrance into steampunk is a tour de force.”

“Monk has crafted a brilliant and gritty world rife with elements drawn from steampunk, blended with dark fantasy and a glint of glamour. She … enmeshes the reader in a fantasy adventure that keeps them on the edge of their seat, up all night, unable to sleep until the fates of the main characters are determined.”

THE AGE OF STEAM

Magic to the Bone

Magic in the Blood

Magic in the Shadows

Magic on the Storm

Magic at the Gate

Magic on the Hunt

Magic on the Line

The Age of Steam

So many people have given their time and talent to make this book a reality. I want to thank my wonderful agent, Miriam Kriss, for your support and enthusiasm. Thank you to my extraordinary editor, Anne Sowards, for your keen insight and amazing ability to say just the right thing at just the right time. My unflagging gratitude goes out to the fabulous artist Cliff Nielsen for bringing Cedar to life and giving the
Swift
her chance to shine. Big thanks also to editorial assistant Katherine Sherbo and publicists Rosanne Romanello and Brady McReynolds. To the many people within Penguin who have gone above and beyond to make this book beautiful and strong, I just want to say thank you from the bottom of my heart.

While this book was a lot of fun to write, it also took some elbow grease to pull it all together. I want to give a very special thank-you to my brother and brainstorming partner, Dean Woods, for checking in on me every week no matter what, and always asking to read more. I honestly don’t know how I would have gotten through the first draft sane without you. You’re my hero.

As always, my love and gratitude to Dejsha Knight for your thoughtfulness and support, and for saying this one (so far) is your favorite. Also, a big thank-you to my wonderful family and friends for all your encouragement and help along the way. I couldn’t do this without you. To my husband, Russ, and sons, Kameron and Konner: you guys are the best. Thank you for helping me make my dreams come true and for letting me be a part of your life. I love you.

Last, but not nearly least, I want to thank you, dear readers, for giving me the chance to share this world and these people with you once again.

C
edar Hunt stared down at his blood-covered hands. Glossy and dark, fresh and plentiful, the blood dripped between his fingers, slicking his arms and snicking to the dirt between his boots. More than just covering his hands, the blood tasted sweet and thick on his tongue and coated his throat as he swallowed.

He looked up. Realized he stood beneath a sparse forest canopy, evening light dabbing gold across branches and leaves.

Dabbing gold across Rose Small too. She had on her bonnet, the tips of her hair swinging just above her shoulders to catch that dusky sunlight and wear it in shades of amber. Though shadows lay low over her face, her blue eyes shone through like a sun-filled sky. But her mouth, so often curved in a smile, was tucked down in a tight frown.

She motioned with the shotgun held low at her hip. She didn’t have her long-shot goggles on. Didn’t have to. Cedar was only a few paces in front of her.

“I’d sure prefer it if I didn’t have to shoot you tonight, Mr. Hunt, but by God and glim I will.”

Why was the girl pointing that gun at him? They’d been traveling together more than a full month across Oregon and were just into Idaho, he, Rose Small, the widow witch Mae Lindson, his cursed brother, Wil, and the three Madder brothers. He hadn’t once come to his senses with any of them standing at arms against him. Not even when the moon had taken him full into his curse.

“Glad you’ve a mind for talking, Mr. Hunt,” Rose said. “Even better your ears are working.” She lifted the gun. “But I’ll still plug you if you don’t step away from that man and head back into the wagon.”

He’d known what he had done the moment he’d seen blood on his hands, tasted it on his lips. He’d killed a man. In daylight.

And he’d done it as a man, not a beast, with no thrall of the moon to blame his actions upon.

He looked down. The dead man wasn’t very large nor very young. He had the look and the smell of someone who spent most his days riding and hunting bounties on men’s heads and most his nights gambling away the noose money.

His Domination by Ann King
Soul Stealer by C.D. Breadner
Blood Hunt by Butcher, Shannon K.
Broken Vessels by Andre Dubus
Darkest Before Dawn (KGI series) by Maya Banks
Competitions by Sharon Green
My Fake Fiancé by Lisa Scott
The Weight of Shadows by José Orduña
Isn't It Time by Graham, Susan J.
The Case of the Vanished Sea Dragon by Gareth P. Jones
Our partner