Read Tinker Belles and Evil Queens: The Walt Disney Company From the Inside Out Online

Tinker Belles and Evil Queens: The Walt Disney Company From the Inside Out 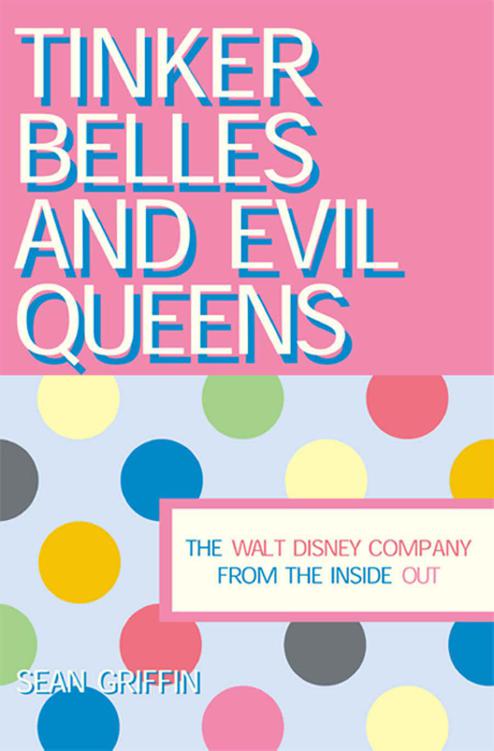 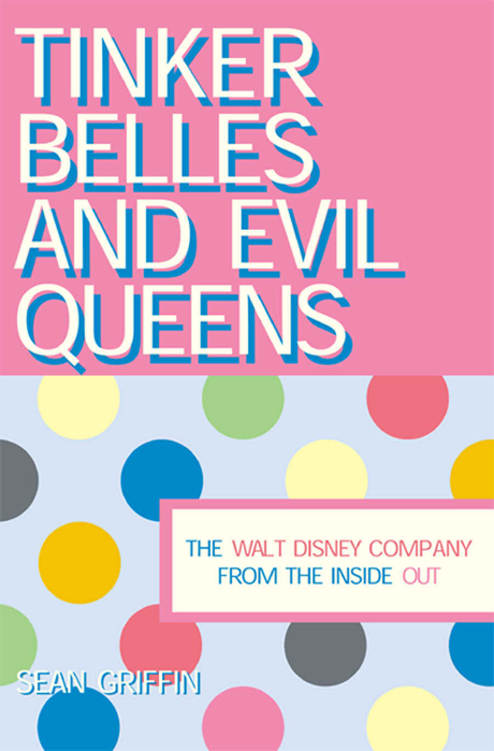 The Walt Disney Company from the Inside Out

Tinker Belles and evil queens : the Walt Disney Company from the inside out / Sean Griffin.

New York University Press books are printed on acid-free paper, and their binding materials are chosen for strength and durability.

Introduction: Whose Prince Is It, Anyway?

Mickey’s Monastery: Sexuality and the

Finding a Place in the Kingdom: Homosexuality at

Disney during the Eisner Era

in the Eisner Era

Marketing Disney to a Gay Community

Epilogue: The Circle of Life

All illustrations appear as a group following p. 104.

I would like to thank a number of people for helping me in my work on this project. First and foremost, my appreciation to the faculty, staff and student body of the Critical Studies Department at the University of Southern California. While almost everyone there has influenced the final shape of this work in some fashion, I would like to especially thank Marsha Kinder, Lynn Spigel and Sandra Ball-Rokeach for their encouragement, involvement and thoughtful criticism during my writing.

Joseph A. Boone and Rick Jewell were also key contributors to rounding out the research and theoretical concepts necessary for tackling this project, and Lee Stork provided enormous support and guidance throughout. From New York University Press, I am extremely indebted to Eric Zinner for his enthusiasm and his support. I also thank Dana Polan and the anonymous reader for NYU Press for their comments and suggestions.

Research entailed numerous areas, and everyone was extremely forthcoming. I especially wish to thank Ned Comstock and the rest of the staff at USC’s Cinema-Television Library and Archive. I also must thank the many former and present employees of The Walt Disney Company who took the time to speak with me, particularly those members of the LEsbian And Gay United Employees, who welcomed me into their meetings and social events warmly and without reservation.

Although not all of those interviewed are specifically quoted in this work, their comments profoundly influence many of the analyses presented throughout this work. My thanks also go to the ONE Institute for helping me find back issues of gay periodicals not usually collected by major universities and libraries. Without their initial help, it is doubtful that this project would have ever seen the light of day. Others who have contributed to this project include Eric Smoodin, Eric Freedman, Maureen Furniss and
Animation Journal
, and all the members of the Society for Animation Studies.

and Dale, Steve, Rene and Scott. A special belated thanks needs to go to Ashraf Wassef and Robert Jahn, whom I hope somehow realize the affect their friendship had on my life. And lastly, I cannot express enough thanks to my partner Harry Benshoff for teaching me, counseling me and bringing me a love I didn’t think possible.

Whose Prince Is It, Anyway?

a company producing theatrical trailers and TV and radio spots for feature films. New Wave worked exclusively on projects for the Walt Disney Company, making ads for all of its feature films, both under the Disney label and under its newer logos Touchstone Pictures and (beginning in 1990) Hollywood Pictures. Although New Wave wasn’t the only trailer house working exclusively for Disney, and New Wave was not a subsidiary of the company, for all intents and purposes, I was working for Disney.

Disney had become a major force in the film industry by the summer of 1988. Over the preceding Christmas season, the studio, under the new management of Michael Eisner, Frank Wells and Jeffrey Katzenberg, had released its first film to bring in over $100 million domestically at the box office—
Three Men and a Baby.
Only a few weeks later,
Good Morning, Vietnam
was released, which also made over $100

million. That summer, Disney would surpass all of the other Hollywood studios in box-office share, with the Tom Cruise star-vehicle
Cocktail,
the re-release of
Bambi
(1942) and the top summer hit
Who Framed
Roger Rabbit?
It was stunning to begin work for a studio that was riding on a crest of energy, ambition and measurable success.

As I continued my career at New Wave, I was gradually promoted up the ladder—first as an all-around assistant to a producer of spots, then, more specifically as the assistant producer overseeing the sound mix of the TV spots, and finally as a producer myself. The success of 1988’s summer releases were followed by the next summer’s
Dead Poets’

Society
and
Honey, I Shrunk the Kids,
then the Christmas 1989 release of ix

The Little Mermaid
and the early spring 1990 release of
Pretty Woman.
It was hard not to “catch” some of the giddy adrenaline that results from such steady success. Even in a lesser capacity, working on spots for the films instead of the films themselves, I could feel some sort of contribution to the success and notoriety of the studio. I could see my work readily on TV, and some of the ads themselves became the topic of journalistic reports. One TV spot for
Dick Tracy
(1990), cut to (and intercut with the video of) Madonna’s song, “Vogue,” even got mentioned in
TV

Yet, the economic success of the Disney studio (and my own) during my employment at New Wave wasn’t the only reason for the elation I felt. As with most American men and women my age, Disney had been around me for most of my life. As a child, I had been surrounded by Disney in the form of films, TV shows, children’s books, comic books, coloring books, games, toys, puzzles, records, ice shows and theme park visits. The earliest memory I have is that of holding my father’s hand as we walked down the street to a movie theatre that was playing
The Jungle Book
(1967). My unbridled anticipation of the movie has helped to keep this memory alive in my consciousness. Working for a company that evoked such deep emotional memories helped carry me through the often late nights and weekend hours of work.

The other factors that helped me through the stress of deadlines and expectations of hyperperfectionism imposed by the studio were the immediate people that worked with me on the projects. A tight group that varied over time from between five to eight people, my co-workers often felt like a second family to me. I developed a father-son relationship with the producer I assisted that extended beyond the workplace.

Many of us included each other in our social lives and helped each other through a number of personal crises. Amongst these crises was my gradual “coming out” process. Although I had already come to terms with my sexuality within myself, it took a long while for me to tell others. A number of events amongst my co-workers made me feel safe enough to make them the first group of people to talk to about my homosexuality. In late 1990, the producer that I assisted died of an AIDS-related disease. Although he welcomed me into his family, which included his male partner, and probably suspected that I was gay, I was never able to bring myself to tell him, and this weighed heavily on me after his death. That next spring, a female co-worker went through a traumatic breakup, ending a six-year relationship. Her admission to me I N T RO D U C T I O N

of her pain, and that the other party was a woman, allowed me to admit my own orientation.

Looking back, I could see how Disney’s films had at times created a space for me during adolescence to (secretly) express my budding sexual orientation. I remember quite clearly the first twinges of desire in the mid-1970s as I watched Kurt Russell as
The Strongest Man in the
World
(1975) and Jan-Michael Vincent as
The World’s Greatest Athlete
(1975). But it wasn’t until late 1992, as I sat in a Hollywood picture palace to watch Disney’s latest animated feature
Aladdin,
that I suddenly realized that the ties between Disney and homosexuality extended much farther than my own individual history. The film was preceded by a live stage show—a medley of various Disney songs, sung by men and women dressed up as the live-action versions of the studio’s famous animated characters—Snow White and Cinderella (with their princes), Ariel the mermaid, and Beauty and her Beast. The huge audience roared with approval and laughter—an audience made up largely of adult males who seemed to enjoy the campy nature of the performances. At another screening in the same theatre, Joseph Boone remarked that the mostly gay male audience during the pre-show “shared recognition of the likely
non
-heterosexuality of several of the men performing as straight Prince Charmings on stage (some of whom were singled out by friends’ exclamations—‘look, it’s XXX!!’—from the audience).”2

The “queer appreciation” of the pre-show continued through both my and Boone’s screening of the film, in which every “gay” joke uttered by Robin Williams as the Genie was loudly applauded by the respective audiences.

It became apparent to me during this screening just how important Disney figures in the lives of a number of lesbians and gay men (including myself). Beyond my co-workers at New Wave, I had met a number of men in gay bars and found out through conversation that they too worked for Disney—either at the studio or for the parks. When I later joined the Gay Men’s Chorus of Los Angeles, a disproportionate number of members were presently or had been Disney employees.

Furthermore, many of these people shared the same fascination with Disney that I did. The producer I assisted was a huge fan of
Peter Pan
(1953). Many gay men I knew owned shelves of Disney merchandise.

Others seemed positively obsessed with Disneyland and went to the theme park in Anaheim repeatedly. In the 1990s, Disneyland and Disney World have held “Gay Nights” (and even “Gay Weekends”). Gay xii

camp has appropriated many of the cartoon villains in Disney films.

The AIDS quilt is covered with Disney imagery. Gus van Sant described his fantasy of

BodySnatchers by Myla Jackson
The Sin of Cynara by Violet Winspear
Wolf Island by Darren Shan
Thornfield Hall by Emma Tennant
A Killing Spring by Gail Bowen
Always Us (We Were Us Series Book 2) by Unknown
ALL THINGS PRETTY PART TWO by M. Leighton
A Russian Bear by CB Conwy
XO by Jeffery Deaver
Ages in Oblivion Thrown: Book One of the Sleep Trilogy by Kate Gray
Our partner