Titan 5 - Over a Torrent Sea 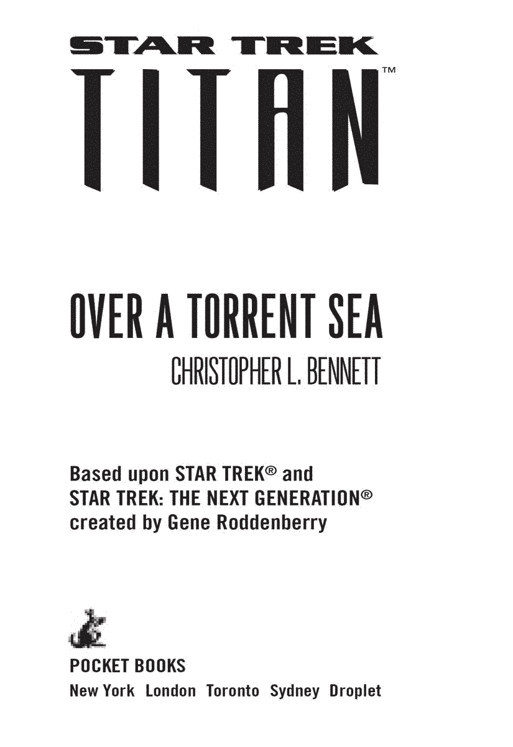 The lights were gone, only the emergency illumination remaining, but it was enough to let Deanna see that the Vulcan was sprawled motionless on the floor beneath the office table, his head coated in something dark and glistening. She couldn’t see color, but she knew it was green. “Oh, God.” She struck her combadge. “Medical emergency, Counselor Troi’s office!”
Maybe emergencies,
she thought as she felt her insides heave and she vomited up her last meal onto the carpet. She couldn’t tell through the inner turbulence if the baby was still kicking. “Sickbay, acknowledge!”

Nothing. “Computer!” She began dragging herself toward Tuvok. “Where are you, you stupid computer?” But that voice, the one that reminded her so maddeningly of her mother, remained silent. “Somebody!” she yelled. “We need help in here!”

Finally she reached Tuvok and began pulling him toward the door. Her muscles, overtaxed from months of service as a walking baby carriage, strained from the exertion. It felt like that wasn’t all she was straining. “Dammit, Tuvok, wake up! Help me out here! I’ll leave you here if I have to!”

Now her own voice was starting to remind her of her mother’s, in attitude if not in timbre.
So be it,
she thought.
Lwaxana Troi’s sheer cussedness got her through the occupation of Betazed in one piece. And kept her baby boy alive.
She’d never been more glad to be that woman’s daughter.

Finally she reached the door, which shuddered halfway open—better than nothing. Forcing it the rest of the way, she channeled her mother’s sheer vocal volume and began screaming for help. 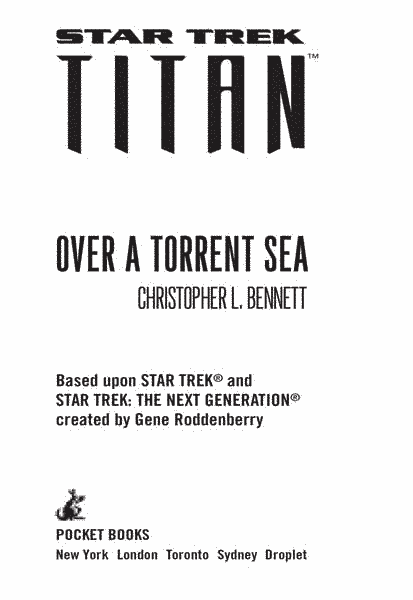 A Division of Simon & Schuster, Inc.

This book is published by Pocket Books, a division of Simon & Schuster, Inc., under exclusive license from CBS Studios Inc.

This tale’s prologue begins in the latter half of February, 2381 (over a week before the epilogue of
Star Trek Destiny, Book III: Lost Souls
), and concludes at the end of April (about two weeks before the end of
Star Trek: A Singular Destiny
).

The rest of
Over a Torrent Sea
unfolds between July 1 and August 4 of the same year.

I am the daughter of earth and water,

And the nursling of the sky;

I pass through the pores of the ocean and shores;

I change, but I cannot die.

For after the rain when with never a stain,

The pavilion of heaven is bare,

And the winds and sunbeams with their convex gleams

Build up the blue dome of air,

I silently laugh at my own cenotaph,

And out of the caverns of rain,

I arise and unbuild it again.

We will not shrink from the challenge of raising back up what the Borg have knocked down. We will honor the sacrifices of all those who fought and died to defend us, by committing ourselves to repairing the damage that’s been done and creating a future that they would have been proud of.

…More important, though Starfleet is needed for the recovery and reconstruction and to render aid, we will renew our commitment to its mission of peaceful exploration, diplomatic outreach, and open scientific inquiry. The
Luna-
class starships will continue—and, in the
Titan
’s case, resume—their missions far beyond our borders: seeking out new worlds, new civilizations, and new lifeforms and offering, to those that are ready, our hand in friendship.

There are those who might doubt our ability to do all these things at once. To them I would say, don’t underestimate the United Federation of Planets.

C
aptain William T. Riker did not underestimate the United Federation of Planets. After the decisive victory it had achieved over the Borg Collective the week before, Riker wasn’t about to put anything past the Federation at this point—even if he, as one of the people directly responsible for that victory, did say so himself. But just because he believed something
could
be done didn’t necessarily mean he agreed it was the best option.

“The Federation needs every able-bodied person it can get right now,” Riker argued as he paced in front of Admiral Masc’s desk. “I want to be part of that effort, Admiral. And so does my crew.”