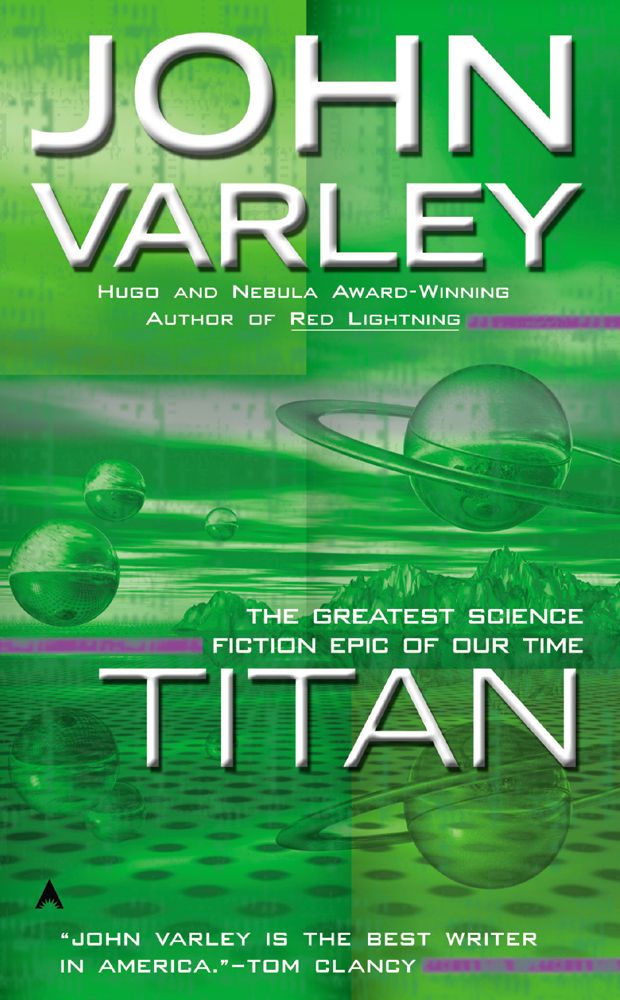 “John Varley has had extraordinary success in giving readers the experience of living in the future.”

“Big, brassy, and beautiful. I read the last page and muttered, ‘Wow.’ ”

“An extraordinary feat of storytelling.”

“Magnificent … I can’t tell you all the adventure and glory and horror and laughter and sheer joy there is in reading this book.”

DISCOVER THE OTHER WORKS
OF JOHN VARLEY …

“I’ve been saying for years that John Varley is the best writer in America. This book proves it.”

The Persistence of Vision

All rights reserved.
No part of this book may be reproduced, scanned, or distributed in any printed or electronic form without permission. Please do not participate in or encourage piracy of copyrighted materials in violation of the author’s rights. Purchase only authorized editions.
For information, address: The Berkley Publishing Group,
a division of Penguin Group (USA) Inc.,
375 Hudson Street, New York, New York 10014.

For
John E. Varley
and for
Francine and Kerry

“Rocky, would you take a look at this?”

“That’s Cap’n Jones to you. Show me in the morning.”

Cirocco was at her wash basin, her face covered in soap. She groped for a towel and wiped the greenish goop away. It was the only kind of soap the recyclers would eat.

She squinted at the two pictures Gaby handed her.

“Just the twelfth satellite of Saturn.” Gaby was not entirely successful at hiding her excitement.

“No fooling?” Cirocco frowned from one picture to the other. “Just a lot of little black dots to me.”

“Well, yeah. You can’t see anything without the comparometer. That’s it right there.” She indicated an area with her little finger.

Cirocco rummaged through her locker and found a pea-green shipsuit that smelled as good as any of them. Most of the handy velcro patches were peeling.

Her room was at the bottom of the carousel, midway between ladders three and four. She followed Gaby around the curving floor, then pursued her up the ladder.

Each rung was a little easier than the last until, at the hub, they were weightless. They pushed off from the slowly rotating ring and drifted down the central corridor to the science module: SCIMOD in NASA-ese. It was kept dark to make the instruments easier to read, and was as colorful as the inside of a jukebox. Cirocco liked it. Green lights blinked and banks of television screens hissed white noise through confetti clouds of snow. Eugene Springfield and the Polo sisters floated around the central holo tank. Their faces were bathed in the red glow.

Gaby handed the plates to the computer, punched up an image-intensifying program, and indicated the screen Cirocco should watch. The pictures were sharpened, combined, then rapidly alternated. Two miniscule dots blinked, not far from each other.

“There it is,” Gaby said proudly. “Small proper motion, but the plates are only twenty-three hours apart.”

Gene called to them.

“Orbital elements are coming in,” he said.

Gaby and Cirocco joined him. Cirocco glanced down and saw his arm go possessively around Gaby’s waist, looked quickly away, noting that the Polo sisters had seen it and were just as careful not to notice. They had all learned to stay out of each other’s affairs.

Saturn sat in the middle of the tank, fat and brassy. Eight blue circles were drawn around it, each larger than the last, each in the equatorial plane of the rings. There was a sphere on each circle, like a single pearl on a string, and beside the pearls were names and numbers: Mnemosyne, Janus, Mimas, Enceladus, Tethys, Dione, Rhea, Titan, and Hyperion. Far beyond those orbits was a tenth one, visibly
tilted. That was Iapetus. Phoebe, the most distant, could not be shown on the scale they were using.

Now another circle was drawn in. It was an eccentric ellipse, almost tangent to the orbits of Rhea and Hyperion, cutting right across the circle that represented Titan. Cirocco studied it, then straightened. Looking up, she saw deep lines etched on Gaby’s forehead as her fingers flew over the keyboard. With each program she called up, the numbers on her screen changed.

“It had a very close call with Rhea about three million years ago,” she noted. “It’s safely above Titan’s orbit, though perturbations must be a factor. It’s far from stabilized.”

“The proximity to the equatorial plane would make that unlikely,” one of the Polo sisters said. April or August? Cirocco wondered. After eighteen months together she still couldn’t tell them apart.

“I was afraid you’d see that.” Gaby chewed a knuckle. “Yet if it was formed with the others, it ought to be less eccentric.”

The Polo shrugged. “There are ways to explain it. A catastrophic event in the recent past. It would be easy to move it.”

Cirocco frowned. “Just how big is it, then?”

The Polo—August, she was almost sure it was August—looked at her with that calm, strangely unsettling face. “I should say about two or three kilometers. Possibly less.”

Gene grinned. “You give me the numbers, I’ll land on it.”

“What do you mean, ‘Is that all’?” Gaby said. “It couldn’t have been very much bigger, not to have been sighted by the Lunar scopes. We would have known about it thirty years ago.”

“All right. But you interrupted my bath for a damn pebble. It hardly seems worth it.”

Gaby looked smug. “Maybe not to you, but if it was a tenth that size, I’d still get to name it. Discovering a comet or an asteroid is one thing, but only a couple people each century get to name a moon.”

Cirocco released her toehold on the holo tank strut and twisted toward the corridor entrance. Just before she left she glanced back at the two tiny dots still flashing on the screen overhead.

Bill’s tongue had started at Cirocco’s toes and was now exploring her left ear. She liked that. It had been a memorable journey. Cirocco had loved every centimeter of it; some of the stops along the way had been outrageous. Now he was worrying her earlobe with his lips and teeth, tugging gently to turn her around. She let it happen.

He nudged her shoulder with his chin and nose to get her turning faster. She began to rotate. She felt like a big, soft asteroid. The analogy pleased her. Extending it, she watched the terminator line crawl around her to bring the hills and valleys of her front into sunlight.