Read T.J. and the Hat-trick Online

THE FIRST THING
that TJ noticed, as Mr Wood’s team kicked off, was that Rodrigo knew how to play football. He was taller than the others, and gangly, but when the ball came to him he controlled it quickly. Then the trouble began. Everyone on Rodrigo’s side began shouting at him.

‘Watch out, Rodrigo, she’s going to tackle you!’

Rodrigo was confused. TJ had to laugh.

They seemed to have forgotten that Rodrigo
only
spoke about three words of English. Before Rodrigo had even had a chance to touch it, Tulsi whipped the ball away from his feet and blasted it at Mr Wood’s goal. The ball bounced off Cameron’s knee and shot away towards Tommy. Tommy chased after it but, just as he reached it, Danny stepped across and tackled him. Tommy hit the tarmac and rolled over several times.

Mr Wood blew his whistle and strode angrily towards Danny. ‘I told you,’ he said. ‘No tackling. It’s dangerous.’

‘It’s OK, Mr Wood,’ Tommy said, pulling up his trouser leg to reveal all kinds of grazes and scabs and bruises. ‘I fall off my skateboard all the time.’ He grinned. ‘I’m good at falling over.’

‘That’s not the point. Blues, it’s your free kick.’

Rafi placed the ball and stepped back. Tulsi was standing in front of Mr Wood’s
goal
, waving her arms madly and shouting for the ball. ‘Go on,’ Jamie said, ‘boot it up to her. She’ll just keep going on at you until you do.’

Rafi ran up and smacked the ball as hard as he could. It whistled past Cameron and bounced between Jay’s legs. Tulsi took a couple of touches towards the goal. She did two fancy stepovers, and TJ wondered why, as there was no one to beat except the goalkeeper. She did one, final stepover and then hit her shot. She was looking around to check that everyone was admiring her skill when Mr Wood reached out a long arm and caught the ball effortlessly in one hand, like a basketball player.

Tulsi stared as he rolled it back out to Rodrigo. She had just hit her hardest shot and Mr Wood hadn’t even blinked. She was still staring when Rodrigo cleared the ball and everyone else ran after it.

It was as if they were all playing for their own little teams, TJ thought, watching the knot of players tussling for the ball. You would never have known that Rafi and Jamie were both on his side. Then suddenly Rafi burst away with the ball and dribbled towards the goal.

It was too late. Rafi shot. TJ watched the ball flying towards him and instinctively went to control it with his foot. Then he remembered he was a goalie and reached out to grab it with his hands. He was too slow. He got a fingertip to it, but it spun behind him and between the posts. While Mr Wood’s team celebrated, Tulsi, Tommy and Jamie all started shouting at Rafi.

‘You’re all rubbish,’ called a voice from outside the fence.

TJ looked over and saw a small bunch of kids from his class. ‘At least we’re trying,’ he said, and he turned and jogged across the playground to retrieve the ball. As he picked it up he saw his brother, Joey, and his dad.

‘Yeah. Why not? And it’s a way to get in the team because the others are really good.’

His dad laughed. ‘Good? That lot? You’ll be lucky if you ever make a team out of them. The tall kid’s not bad, and that red-haired boy, but I reckon you could run rings round them. That girl’s a real goal-hanger. She never moves.’

‘It’s only our first practice,’ TJ said. ‘We’ll get better.’ He picked up the ball and ran back to the game, leaving his family shaking their heads.

Five minutes later Mr Wood called them
all
together. ‘Well done, everyone,’ he said. ‘You’ve worked really hard. But if you think I’m going to tell you you’re great footballers, well, I’m not.’

TJ’s heart sank. He looked at the others. They all looked as fed up as he felt.

‘None of you can pass the ball to save your lives,’ Mr Wood continued, ‘and some of you don’t even seem to know which way you’re supposed to shoot. But on the other hand, it seems to me that you’ve had a raw deal. There’s been no PE for ages here, and where your football pitch should be there’s a strip of grass that looks like it’s been dug up by a herd of giant moles.’

They all laughed, and TJ suddenly felt a little flicker of hope.

‘I can turn you into a team,’ Mr Wood said. ‘But only if you’re all prepared to work harder than you’ve ever worked in your lives. I don’t know yet if you’ll be any good, but
you
will
be a team, and then Parkview School will have something to be proud of for a change. How about it? Are you up for it?’

TJ suddenly saw the excitement glittering in Mr Wood’s blue eyes. It seemed to flicker in the air. He could feel it, running through him like electricity, and he realized that the others were feeling the same thing. As he walked home with his family. his dad said, ‘You really want to do this, don’t you, TJ?’

‘Well, I did see one good thing out there tonight – your Mr Wood. He seems like he knows what he’s doing.’

‘Yeah, you did. And we met quite a few of your mates’ mums and dads while we were there. Nice, friendly people. I reckon if we all got together we could really make things start to happen in this place. But listen,
that
Mr Wood. Where’s he from?’

‘It doesn’t matter,’ Mr Wilson said. ‘I just had the feeling I’d seen him somewhere before, that’s all.’

IT WAS THE
following Monday morning when TJ arrived in the classroom and spotted Rob writing in his notebook. ‘What are you doing now?’ he asked him.

‘I’m finishing the stats from the training last week.’

‘I didn’t
want
anyone to see. They’d just make fun of me if they knew.’

‘I bet they wouldn’t. Why don’t you show them?’

Before Rob could say anything, TJ had called Rafi and Jamie over. ‘Look,’ he said.
‘Rob’s
analysed our training session. It’s brilliant.’

‘It doesn’t need analysing though, does it,’ Jamie said. ‘We were rubbish.’

‘You have to know exactly why you were rubbish,’ Rob said seriously. ‘Look, Rafi, this is you.’ Little black arrows darted about all over the diagram of the pitch. ‘I estimate that you ran about one kilometre in five minutes.’ 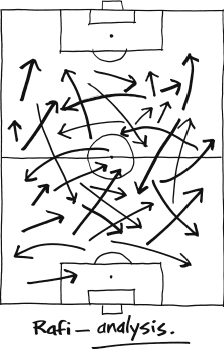 ‘Rob’s a bit weird,’ Rafi said. ‘Everyone knows that. What I meant was, it’s good that I ran all that way. I must be fast!’

‘You have to run in the right direction,’ said Jamie. ‘Half the time you don’t even know which way you are running.’

‘I made one little mistake, that’s all,’ Rafi retorted. ‘Hey, what’s that?’

‘It’s Tulsi,’ Rob said. ‘It’s not perfect because I was watching Rafi most of the time, but I think it’s about right.’ They all looked at Rob’s diagram and laughed. All of the arrows were in a very small space next to the goal.

‘Are you talking about me?’ said Tulsi. ‘What are you looking at?’

They explained Rob’s picture to her. 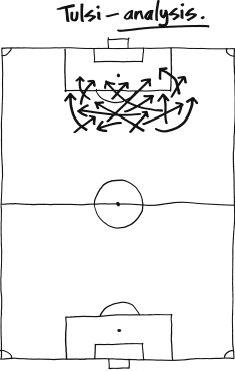 ‘I estimate that you ran about a hundred metres in total,’ Rob said. ‘Most strikers in the Premier League run about twelve kilometres in a match.’

‘We’re not in the Premier League, Rob,’ Tulsi said angrily. ‘And I don’t need to run if people pass the ball to me properly, do I?
Who
said you could spy on us anyway?’

‘What’s all this?’ None of them had noticed Mr Wood entering the classroom. Now he was looking over Tulsi’s shoulder at Rob’s book. ‘It looks like Prozone. Did you do this, Rob?’ Rob shut the book quickly. ‘Clear off, the rest of you,’ Mr Wood said, sitting down beside him. ‘Get your work out and get on with it. And no talking.’

TJ had already figured out that theirs was the only classroom in the whole school where people worked in silence. In fact, he had sometimes had the feeling that it might be the only classroom in the school where anyone worked at all. He had walked past the Reception classroom one morning and seen the teacher knitting while the little kids did exactly as they liked. The noise from the rest of the school echoed along the corridors now, as Mr Wood spoke quietly to Rob. After a few moments, TJ was amazed to see Rob
open
his book and show something to Mr Wood. Then Mr Wood said something and Rob’s face cracked into a smile.

‘Quiet over there,’ snapped Mr Wood.

When he’d finished talking to Rob, Mr Wood went to the front of the class. ‘I’ve been busy this weekend,’ he said. ‘I had a meeting with the PE teacher over at Hillside School. She seems to think they’ve got a decent football team. Perhaps you’d like to tell everyone about them, Rob.’

‘What does
he
know?’ Danny muttered.

Mr Wood fixed him with a look that made him go bright red, and then pale. It was a look that TJ thought would make a good secret weapon. ‘Go ahead, Rob,’ said Mr Wood.

‘Shall I read it for you?’ Mr Wood offered.
‘Or
one of your friends?’

‘I’ll read it if you like,’ TJ said, and Mr Wood handed him the notebook. ‘Runners-up in the Inter Schools League,’ TJ read. He saw that Rob had made a league table just like the ones in the papers, in very tiny black writing. ‘They won nine, drew three and lost none,’ he said. ‘They scored twenty-five goals and let in twelve. I suppose that means they’re very good.’ 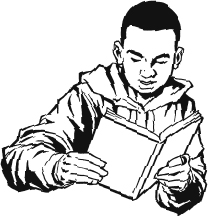 ‘Their PE teacher reckons they’ll win the league this year,’ Mr Wood said. ‘She’s
called
Mrs Singh and she obviously thinks Hillside School is the best school in town. She didn’t actually say so, but I got the impression that she thought Parkview School was the worst school she’d ever come across. She didn’t like the teachers, or the mums and dads, or the kids.’

The Renegade by Terri Farley
Blackout by Jan Christensen
Gemini Summer by Iain Lawrence
Love the One You're With by James Earl Hardy
Héctor Servadac by Julio Verne
OwnedbytheElf by Mina Carter
Seer of Sevenwaters by Juliet Marillier
Seduction: A Novel of Suspense by Rose, M. J.
Her Perfect Mismatch (A Town Named Eden Book 2) by Parin, Sonia
Home Is Beyond the Mountains by Celia Lottridge
Our partner