Read To Get Me To You: A Small Town Southern Romance (Wishful Romance Book 1) Online

To Get Me To You: A Small Town Southern Romance (Wishful Romance Book 1) 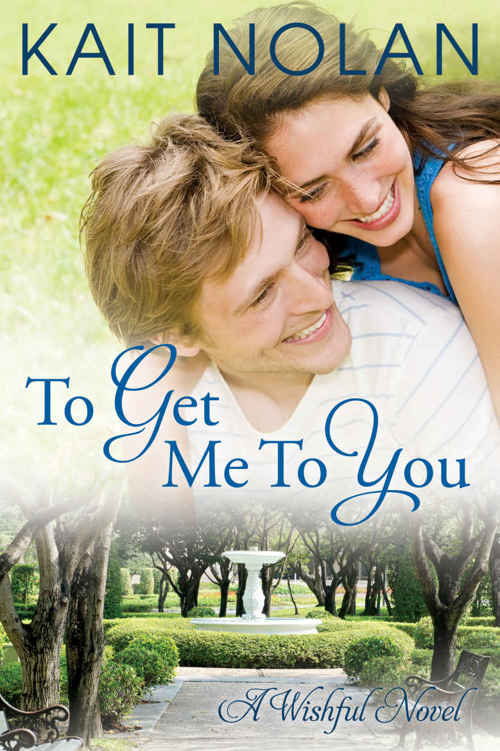 Other Books By Kait Nolan

Excerpt Be Careful, It's My Heart

To Get Me To You

To Get Me To You

Written and published by Kait Nolan

AUTHOR’S NOTE: The following is a work of fiction. All people, places, and events are purely products of the author’s imagination. Any resemblance to actual people, places, or events is entirely coincidental.

This ebook is licensed for your personal enjoyment only. The ebook may not be re-sold or given away to other people. If you would like to share this book with another person, please purchase an additional copy for each person you share it with. If you’re reading this book and did not purchase it, or it was not purchased for your use only, then you should purchase your own copy. Thank you for respecting the hard work of this author.

To The Pie Society,

For your unflagging cheerleading, support, and stream of small town Southern gossip. You are an inspiration.

I am always humbled by the number of people who help me get a book from that twinkle in my eye to fruition, and this one, in particular, has been no exception. I have so many people to thank!

My brilliant cover artist, Robin Ludwig, as always, you far exceeded my expectations!

My dear friends Melissa, Erica, and Alyson for a regular supply of small town hilarity that makes me bray with laughter and provides a constant source of inspiration,

My critique partners Susan Bischoff, Claire LeGrand, Jessica Fritsche, and Liana Brooks, this book is so much better because of your input

and the many, many people who talked me off the edge of crazy during my pre-release spaz, especially Lisa Kroger, who knows when to give me a Gibbs slap to get over myself.

Love and thanks to you all!

There was no escaping now.

As the steady click of sensible heels on asphalt grew ever closer, Campbell Crawford shut his eyes and repressed a curse. Where the hell had she come from?

To give himself another few moments to arrange his face into something resembling polite civility, Cam ducked back into his truck.

“Mr. Crawford, I need a word.” Agnes Crockett used the same stern tone she used to call his name when she’d taught trigonometry back in high school.

Resisting the urge to hunch his shoulders, Cam tucked a cardboard tube of landscaping blueprints under his arm and turned to face her. “Yes, Mrs. Crockett. What can I do for you?”

Mrs. Crockett peered up at him from beneath her umbrella, a bright floral affair completely at odds with her no-nonsense demeanor. “I have a matter that needs to be brought up at the next City Council meeting. It’s about that stoplight at Market and Spring Street.”

Not again.
If he had a nickel for every time somebody griped about that stoplight, he could buy a round of drinks for everybody waiting inside the Mudcat Tavern.

“The city needs to fix the sensor. Cross traffic from Market Street gets stuck entirely too long, when nobody’s even coming the other direction. Why, I sat there for a full
five minutes
today without a soul passing by on Spring Street, and I was late to Bitsy Elliott’s daughter’s baby shower. When is that sensor going to get fixed?”

Cam privately thought that, given the state of the city coffers, it would be more likely the stoplight would be entirely decommissioned and they’d go back to the four-way stop, but that wasn’t something he was about to share with this particular constituent. “I certainly understand your concern, Mrs. Crockett. Now we talked about this the last time—”

“You said I had to fill out this form.” She dug around in her purse and came up with a sheet of paper that she thrust at him. “I want that traffic light fixed.”

Cam took the paper. She’d filled in the blanks by hand, her slanted scrawl covering most of the page. He bit back a sigh and refrained from mentioning that it was a web form she was supposed to submit online. “Ah, yes, ma’am. I’ll see that it’s put on the agenda for our next City Council meeting.”

“See that you do. I’ve been put off for the
last time,
young man.”

Aware that his shoulders had hunched up by his ears, Cam forced them down. “Yes, ma’am. Now, if you’ll excuse me, I’ve got to go meet a client.” He tapped the blueprint tube and softened the diplomatic brushoff with a smile. “You have a good evenin’, now.”

He called the escape good when he made it to the door of the Mudcat without pursuit or an order to detention.

Somebody had Garth Brooks playing on the jukebox. The hot fiddle licks of “Callin’ Baton Rouge” were punctuated by the crack of billiard balls from the far side of the bar. Christmas lights still twinkled around the perimeter, as they probably would until Valentine’s Day or Easter. Cam felt some of the stress of the day leech out as he crossed to the high-top table in the corner, where his cousin, Miranda, was already taking a pull on a Sam Adams.

“You’re late.” She set down the bottle. “Had a real pisser of a day at the clinic, so I started without you. Two days after Christmas and there’s already an outbreak of flu. And
not
the strain they were predicting when they formulated the flu shot this year. You have a client meeting?”

Cam laid the blueprint tube in another chair. “No, this was just cover. Got ambushed by Mrs. Crockett in the parking lot.”

He cocked thumb and forefinger at her. “Got it in one. I’m late because I was working on mixing potting soil today, and I figured you’d appreciate me showering and changing first so as not to smell like manure.”

Miranda leaned over and gave an exaggerated sniff as he shrugged out of his wet coat. “Much obliged then, cuz.” She settled back in her chair. “Did you hear about Travis Hugget?”

“Remember he’s been dating that girl from college—Gwen something or other—long distance for more than a year, since she took that job in New York? Apparently, right before Christmas, he went up there to her fancy Wall Street office and proposed, right as the entire company was coming out of a staff meeting.”

Poor bastard.
He had plenty of reason to know that was a disaster waiting to happen.

“Not only did Gwen say yes, she quit her job right then and there, and they eloped.”

Cam swiped Miranda’s beer and tipped it back to wash the sour taste of envy from his mouth as he revised his opinion.
Lucky bastard.
“Good for them.”

Aware of his cousin’s
I shouldn’t have said that
expression and sensing an imminent and entirely unnecessary apology, Cam wiped the scowl from his face. Christ, when was his family going to stop pussy footing around it?

Miranda’s phone rang and she glanced at the screen. “It’s Norah. I need to take this. Go get yourself a beer and bring me another since you polished mine off. And put in an order of cheese sticks while you’re up there. I’m starving.”

“Your wish.” He saluted and headed for the bar, sending a silent thank you to Miranda’s old college roommate for the distraction.

Adele Daly, the opinionated owner of the Mudcat, worked the taps as she chatted with Abe Costello about Ole Miss’s chance at making it to the Final Four.

“I’m tellin’ you, if they can just take out Emory, they’ve got a shot,” Abe insisted.

Adele slid a glass of IPA down the bar into a waiting hand. “My money’s on State. They’ve been burning up the courts this season.”

Easing between two stools, Cam propped himself on an elbow and nodded a hello to Abe. “Adele, would you be so kind as to get me a Killian’s and put in an order for cheese sticks and another Sam Adams for Miranda?”

“You want a bottle or tap? Keg’s fresh.”

“Tap then. And better add some chili cheese fries to that order. Miranda doesn’t strike me as being in a sharing mood tonight.”

Cam lounged back against the bar and took note of the glass of scotch Abe was nursing. “Are we celebrating or commiserating?”

“Little bit of both. I got an offer on my land.”

“That acreage over by Hope Springs?”

Cam straightened in surprise. Abe was a local man, born and raised in Wishful. That land parcel had been in his family for generations. “You’re selling?”

“Thinkin’ ’bout it. It’s a damned good offer. Well above market value.” He sipped the scotch and grimaced, more a testament to the situation than the drink.

Cam had figured that. Nobody local had that kind of money to throw around. In the wake of the plant closing, a lot of people didn’t have any money at all. Heirloom Home Furnishings had been the primary employer in town. When they’d opted to move their operations to Mexico eight months ago, it had gutted the town’s economy. That was just the latest blow in a long line of economic downturns over the last few decades. Their population was shrinking as more and more good people were forced to go elsewhere to support their families.

“But you can’t sell. That land’s part of your family history. Part of Wishful’s history.”

It was an unfortunately familiar story. Loss of workforce and population also meant loss of business. Abe’s farm supply company took a hit when Cam bought the nursery five years ago. Cam had a wider variety and better stock, and with local propagation, he was able to offer better prices than the other man. But nursery and garden stock wasn’t Abe’s bread and butter. If the farm supply was suffering, this was the first Cam had heard about it.

Adele set Cam’s beer on the bar. “It’s too bad the city can’t make an offer on that parcel. Be nice to make a formal park out there by the springs. Like that plan you drew up. It’d be a great addition to the town.”

“Sally Forester on my side. Other folks got an attorney from out of town.”

“Hold off on making any final decisions, Abe. If anybody’s gonna buy that property, the city ought to have first crack at it.”

Abe grunted in acknowledgment, but it was a hollow victory. Buying more land was only one of many things the city couldn’t afford to do. The truth was, the town he loved was dying, and Cam didn’t know how much longer they could limp along as they were. What they needed was a miracle, and despite the holiday season, those were in pretty short supply.

“And how is my sister from another mister?” Miranda’s voice rolled out of the car speakers, a welcome breath of the South that made Norah Burke ache with homesickness.

“Tired. It’s a long drive back from New York.”

“Why on earth didn’t you fly?”

Micah's Calling by Lynne, Donya
Battleground by Terry A. Adams
Chosen (Motorcycle Club Romance): Axel and Paige 2 (Fallen Idols Motorcycle Club Book 5) by Rylan, Savannah
The Reluctant Fundamentalist by Mohsin Hamid
The Sweetest Thing by Christina Mandelski
On Wings of the Morning by Dan Verner
Ever Enough by Borel, Stacy
Street Soldier 2 by Silhouettes
If Only You People Could Follow Directions: A Memoir by Nelson, Jessica Hendry
Every Sunset Forever by Butler, R. E.
Our partner