Read To Have and to Hold Online

To Have and to Hold 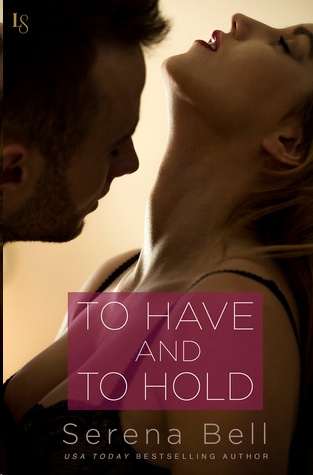 To Have and to Hold
is a work of fiction. Names, places, and incidents either are products of the author’s imagination or are used fictitiously. Any resemblance to actual events, locales, or persons, living or dead, is entirely coincidental.

L
OVESWEPT
is a registered trademark and the
LOVESWEPT
colophon is a trademark of Penguin Random House LLC.

This book contains an excerpt from the forthcoming book
Getting Inside
by Serena Bell. This excerpt has been set for this edition only and may not reflect the final content of the forthcoming edition.

Excerpt from
Getting Inside

Hunter Cross made Trina Levine laugh at the most inopportune moment, and her orgasm, which had been building for what felt like hours, broke up and drifted apart the way the colors of the clouds do once the sun has dipped below the horizon. But she didn’t care, because it was so good to laugh with him, so good to be with him, lying on a blanket on a soft bed of pine needles in the woods.

“I’ve never done it outside before,” she confessed, her cheek secure in the dip between the cap of his shoulder and the hard curve of his pec, a space just for her. Both of them were breathing hard, and his face, when she snuck a look at it, was as relaxed as she’d ever seen it, a soft, secret smile tugging up the corners of his mouth.

His arms tightened around her. “Me neither.”

It had been the best kind of comedy of errors. They had each wanted to surprise the other, so both—without consulting—had hired babysitters, bought flowers, made dinner reservations.

Great minds think alike,
Hunter had said, when the redundancy had come to light.

And in the end, two sets of hotel reservations had gone unused because a hotel room was too small for what they were feeling. Instead, they’d hiked to a spot he knew, a secret spot, and here they were.

Her heart, which was still pounding from the sustained intensity of their lovemaking, from the shock and power of her orgasm, from laughter, sped up. He sounded so—serious.

“I’ve fallen in love with you.”

A wave of warmth and happiness swept over her. She’d been thinking the same thing for days, the words wanting to burst out at all kinds of crazy moments. Making dinner together in his kitchen. Shopping for the girls’ back-to-school clothes. At the Woodland Park Zoo as they’d stood back and watched the girls try to get a hippo’s attention. He’d reached for her hand and she’d felt the purest kind of contentment.
Family
, she’d thought. The notion scared her, because she wanted it so much.

It had happened fast. Eight weeks ago, they’d been friends. Not even particularly close friends. Just adults thrown together by the bond between their daughters, who had been besties since third grade. After Hunter’s wife was killed in an on-base attack in Afghanistan, three years ago, Hunter’s deployment schedule had left Clara primarily in her grandmother’s care. In Trina’s world, Hunter had been a mostly absentee dad who occasionally dropped off and picked up his daughter with a smile and a hug.

“I’ve never felt this way before.”

Hunter’s words. The words she’d wanted to say, the words she’d been thinking, coming from his mouth, getting under her skin, soaking into the pulse of her blood.

“Not even—” He’d been married to Clara’s mother for eight years before her death.

“No. This is different.”

“Me neither.” She couldn’t muster more than a whisper.

He sat up, pulled her upright, and took both her hands. “After I come back—”

More words she hadn’t let herself hope she’d hear. She’d been willing to wait, to let the way she felt, the way she knew he felt, stand on its own. To have faith in the strength of what had passed between them, without outright declarations. But here he was, promises in his dark brown eyes.

“You’re going to be living in my house anyway—”

Trina had offered to watch Clara for him during his yearlong deployment. Hunter’s mother had met the man of her dreams, a Honda Gold Wing–style wanderer, and gone off to see the country for the first time in her life. For Trina to care for Clara alongside Phoebe wasn’t much trouble—the girls were easier together than solo—and a grateful Hunter had asked her if she’d like to house-sit. He politely hadn’t said anything to indicate he’d noticed the shabbiness or cramped quarters of her and Phoebe’s digs. She’d jumped at the house-sitting offer. Only an idiot would have turned down the opportunity to live in Hunter’s big house in the Grant Hills woods instead of in her one-bedroom rental, especially with two girls on the brink of adolescence.

Hunter squeezed her hands, his gaze holding hers. “So, I wanted to know: Can we make it official? Will you move in with me? Like, for real?”

He laughed. She hadn’t hesitated or played coy, and maybe if she’d taken a second to reflect she could have at least pretended to think about it, but the truth was, she was no good at pretense, and had never seen the point of it with Hunter. He made her want to be
Trina
, exactly who she was when she woke up in the morning, without ornamentation or decoration. And that was—she knew without doubt—who he’d fallen in love with.

It was the most amazing feeling, to be loved like this.

The way he was looking at her…

“I’d been thinking anyway, even before”—he touched her cheek tenderly—“even before
you
happened to me, that this might be my last deployment. Because of Clara, partly. Even before my mom took off with Ray, I already felt like it was wrong, leaving her, without—”

His voice tightened. Trina knew he ached for his daughter and what she’d lost—as much as, if not more than, he grieved for himself. Before Dee, Clara’s mom, had died, they’d staggered their deployments so Clara always had a parent with her.

“I’ve been doing this a long time, and it never gets any easier. Leaving Clara. Seeing what I’ve seen…”

Sitting by the outdoor fire pit one night after the girls had gone to bed, side by side in their sleeping bags on Clara’s floor, he’d told her this last deployment had been the hardest yet. He’d said that he’d thought it would get easier eventually, but it never did. Men were lost. Mistakes were made. They were the most human, humble mistakes, but the consequences were enormous. Civilians killed. Families and cities broken. Hearts, too. That was the thing, he said. If you stayed in long enough, you would almost certainly come home broken, if not in body, then in spirit.

“I’ve served out my obligation. I’d like to come out and…and be here with Clara. And you and Phoebe. We could be together.”

She didn’t think she could stand it, how full she felt, and maybe he saw that in her eyes, because he reached for her then, leaned forward and took her face in both his hands and kissed her tenderly, gentle for that first contact but then hot again, right away. His fingers moved through her hair, over her neck and shoulders, his breath hard and fast already, mingling with hers. The kiss was almost brutal, his tongue invading, one thumb and finger urging her nipple to standing, and his voice low in her ear said, “I didn’t think I could want you again this bad that fast.”

After a second round of lovemaking, they lay for a long time, silent, and then he told her what he’d been thinking, that he’d leave the army and maybe pick up the finish-carpentry work that he’d done summers in high school and between deployments. He built a fire, and she watched from the blanket, loving the Boy Scout/soldier/
man
liness of it, and they made a plan together. She’d sleep in the guest room when he was away and for a little while after he came home, because the girls still didn’t know anything about what was going on between their parents. There was nothing new love needed less than the scrutiny of two eleven-year-old girls. But then after he’d been home a bit and everything had settled down, they’d tell their daughters.

“It’ll give them time to get used to all of us being together.”

All of us. Being together.

She loved it. It was something she’d never had with Phoebe’s father, and for the first time, she let herself believe it could happen with Hunter, her joy tinged with only the faintest fear, because they were, after all, talking about a whole year in the future. “And it’ll give you time to make sure your feelings haven’t changed,” she said tentatively. But her imaginary fingers were crossed in hopes he’d tell her not to be ridiculous.

He rolled over and braced himself up on his elbows and looked down into her eyes, his own full of everything he’d already said to her, all the words she’d tried not to want to hear, words she’d have to save up over the next year because she’d miss him, miss this, so bad…

He brushed a strand of hair off her forehead, swept his thumb over her bottom lip. “I’ve known you a long time. Maybe we’ve only been involved a little while, but I know you as a person, and I know you as a mother.”

He leaned in and kissed her, sweet and deep.

“I know my feelings, and they’re not going to change.”

Those words, they were like having everything that had happened already that night, the whole vast, beautiful gift of it, tied up in a bow.

Year in Palm Beach by Acheson, Pamela, Richard B. Myers
How the West Won: The Neglected Story of the Triumph of Modernity by Rodney Stark
Escaping the Delta by Elijah Wald
The Spellbound Bride by Theresa Meyers
A Needle in the Heart by Fiona Kidman
The Fall to Power by Gareth K Pengelly
Changing Tunes by Heather Gunter, Raelene Green
The Doomsday Box by Herbie Brennan
Diamonds in the Dust by Kate Furnivall
The Doublecross by Jackson Pearce
Our partner