Read To Love a Man Online

To Love a Man 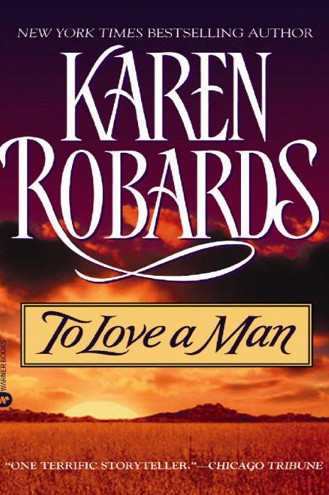 “FOUR STARS — HIGHEST RATING!
TO LOVE A MAN
is the next best thing to actually living the story . . . the kind of book to take to bed or better yet — convince the man in your life that ‘the mercenary position’ is great.”

“Karen Robards writes an absolutely splendid tale, and is among the best for giving the reader incomparable sexual tension. . . . She is certainly one of the few authors who successfully moves from historical to contemporary fiction and back again with gifted ease . . . [she writes] romantic adventure that will leave you breathless.” 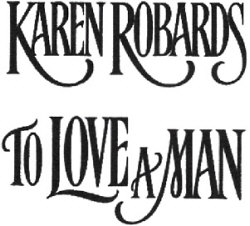 TO LOVE A MAN. Copyright © 1985 by Karen Robards. All rights reserved. No part of this book may be reproduced in any form or by any electronic or mechanical means, including information storage and retrieval systems, without permission in writing from the publisher, except by a reviewer who may quote brief passages in a review.

A mass market edition of this book was published in 1985 by Warner Books.

Visit our Web site at www.iPublish.com

L
ISA
Collins’s slender body was huddled into a compact ball, her face just inches from the dirt floor as she pressed her nose and mouth hard into her bare, grimy arm. Smoke rose all around her, thick black smoke that rolled and curled and rammed oily fingers up her nose and down her throat. Choking, she coughed, desperately muffling the sound. Please God there was no one nearby to hear. If they heard her . . . she shuddered. She had no illusion as to what her fate would be.

At least the screaming had stopped. Although she knew she shouldn’t be, knew what the silence meant, Lisa was guiltily grateful for that. She had thought she would go mad, listening to the tortured cries of Ian and Mary Blass and their three children as they roasted to death inside the flaming inferno of what had once been their home. If she hadn’t been outside when the soldiers came, making a quick, prebed visit to the shed that housed the farm’s sanitary facilities, she would have been dead now, too. At the thought her body shook from head to toe. And she hadn’t escaped yet, she knew. The killers were still here, all around her, putting the torch to everything, butchering animals as well as humans. The screams of pigs and cows had mingled with those of the Blasses. . . .

They were guerrillas, of course. For which side Lisa couldn’t be sure. She had known of Rhodesia’s civil war when she had asked for the assignment, but it had seemed like such a heaven-sent chance for escape that she had barely considered the possibility of danger. Besides, she had thought—naïvely, as was now abundantly clear—that her status as an American journalist would protect her. Well, as in so many other things in her life, she’d been wrong. Maybe dead wrong.

The smoke was getting worse every second that she lay there, coiling up under her protective arms to caress her face, doing its best to suffocate her. Lisa knew that she had to make a move, had to run for it while she was still capable of doing so, but the thought of leaving her hiding place, of venturing out into the open space of the yard, paralyzed her. She was mildly surprised to discover that, despite everything, she was not yet ready to die. . . .

On the other side of the thin wall, feet thudded to within inches of her head. Lisa stopped breathing as a man shouted something in an unintelligible language. Somewhere over her head she heard a dull
plonk.
Then, to her overwhelming relief, the footsteps ran on.

Lisa’s heart was just regaining its normal rhythm when she became aware of an ominous crackling noise. Lifting her head, she looked around and saw that the whole back end of the shed was bathed in a hot orange glow. Fire! Tiny tongues of flame were licking at the roof, racing for the walls. She no longer had a choice: she had to run for it. Panic welled like vomit in her throat. She was scared—scared to death. So scared she couldn’t move—could she?

She could. Terror became her ally, forcing her cramped limbs to propel her in a low crawl toward the door. Her breath rasped painfully in her throat. Tears made scalding tracks down her face. She was going to die, she knew, right here on this isolated farm in southern Rhodesia. And she was only twenty-five! It wasn’t fair! Oh, God, it wasn’t fair!

The three feet to the door seemed like three miles. Lisa gagged on the smoke, her back muscles tensing in futile defense against the fire now raging directly above her. All around, small flaming pieces of wood dropped to the ground. Lisa knew that it was just a matter of a few minutes before the roof collapsed—and she would die. Did it hurt to die? she wondered. Of course it did. Think of how the Blasses had screamed. . . .

Her nails dug deep furrows in the dirt floor as she dragged herself forward. If she could just get outside she would live—at least for a little while. But when at last she reached the door she stopped, gasping for precious air as she lay on her stomach on the floor, her mind whirling in frightened circles. What awaited her beyond the door terrified her almost more than the crematorium she faced if she stayed.

“Into your hands, Lord,” she whispered finally, and giving herself up to His protection she pushed the door. It moved easily. She opened it just enough so that she could see out. The night air, cool and sweet compared to what was in her lungs, flowed in through the crack, touching her face like a benediction. Lisa gulped it in, loving the pain of it as it chafed her raw throat. Air was wonderful, one part of her mind registered, as her eyes raced fearfully over the scene before her.

It was night, but it wasn’t dark. Flames shooting out from the house and barn and various outbuildings illuminated the farmyard so that it was almost as light as day. Everywhere Lisa saw khaki-uniformed men, some standing gloating over the destruction they had wrought, some running through the yard brandishing flaming torches, some loading objects that had obviously been plundered from the farm onto trucks. None of them seemed particularly interested in the burning outhouse. Lisa took a deep, steadying breath. She had a chance, then. Just a chance.