Read To Please the Doctor Online

To Please the Doctor 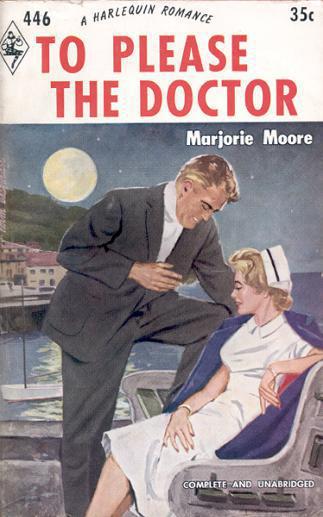 TO PLEASE THE DOCTOR

Dr. Duncan McRey was a most difficult person, thought Jill Fernley, and almost as bad was Brenda
Malling
, her staff nurse. Jill loved her work in St. Joseph
’
s Hospital, but hated the intrigues and friction of community life.

Brenda was
jealous
of Jill
’
s success, but why, oh! why had Dr. McRey to be so unfriendly to nurses when he was so gentle with children? Was he like that to all women?

This was a question which came to concern Jill more and more before at last she found the answer.

There might be, Jill
Fe
rn
ley knew, many places in England with ill-chosen names, but as she was jolted along the front of Sunsand Bay in an ancient station taxi she was quite sure that no resort could be more inappropriately named than this! Firstly, the sea, washing up on the stony shore, had no resemblance whatever to the regular semicircles of the geography books, and no sun could have found the strength to pierce the overhanging mist; the reference to
“
sand
”
was nothing less than a gross misrepresentation of the truth since
n
o one, however zealous, could ever have found more than a few grains adhering to those shelving expanses of sea-washed pebbles.

Turning away from the misted window, Jill leaned back against the worn cushions of the cab. None of these things were really very important since she hadn
’
t come to Sunsand on a holiday, she
’
d come to take up the post of Sister at St. Joseph
’
s Hospital, and neither the geographical nor geological disadvantages of Sunsand really mattered. It would of course, be disappointing if the attractions of the post had been equally misrepresented, but Jill hardly thought that likely. Dr. Laine had not only recommended it but had herself sponsored Jill
’
s application, and from what Jill could recall of Harriet Laine, she wa
s
nothing if not completely reliable.

It would be grand meeting Harriet again. She was a unique character, and during their school days they had been the greatest of friends. On leaving school Harriet made up her mind to study medicine, but Jill, owing to her father
’
s death and her mother
’
s clinging dependence, had been unable at that time to take up a career, and for two wasted years she had accompanied her mother on a dreary round of social activities, bridge afternoons, cocktail parties, and the like, worthless occupations of which Mrs. Fernley never seemed to tire. Nor did she attempt to understand her daughter
’
s complete indifference. During
those ye
a
rs Jill had reluctantly given up any idea of independence and satisfied herself with a few hours of voluntary welfare work at an East End hospital. Her mother
’
s remarriage suddenly changed everything. Not only was she no longer necessary, but in this changed
ménage
she did not even feel wanted. It was Harriet who had advised her to take up nursing, and had assured her she was just the type of person needed. Jill had gone into training and, as her friend had prophesied, she passed her exams, with the minimum of effort and rose quickly to be a Staff Nurse at one of the largest General Hospitals in London.

Eddies of white mist blowing inland from the sea had now completely blotted out the landscape. The promenade—or what apparently passed for a promenade, was entirely deserted and the ugly little shelters, which showed through the mist every few yards, seemed to be the only break in a completely flat landscape. Jill gave an involuntary shudder; she wasn
’
t easily depressed, but she began to wonder whether a nice steady job as Staff Nurse in a London hospital wasn
’
t after all preferable to a Sister
’
s job in the back of beyond!

The jolting of the taxi now became more definitely pronounced; the mist, too, increased visibility through the window was reduced to nil, and Jill couldn
’
t help wondering with some dismay whether they were still on the road or whether, confused by the mist, they weren
’
t now traversing the shingled beach towards the sea! She wasn
’
t left long in doubt; with a screech of brakes the car drew to a standstill.

Jill couldn
’
t believe that any road could be rougher than the last few yards they had traversed, but since she felt she
’
d prefer to be on her feet, she let the statement pass. While she searched her bag for the fare the driver set her suitcase on the ground.
“
Nasty mist co
m
in
’
up,
”
he remarked conversationally.
“
Won
’
t be able to see nothin
’
in an hour or two.
”

As far as Jill was concerned she could see just
“
nothin
’ ”
now, but it was at least gratifying to know that even a
“
local
”
had considered the weather worthy of comment, so although it was November, it wasn
’
t perhaps of such common occurrence as she had feared. Groping her way forward, she found the gate and unhooked it, then, realizing that it had been hooked open and not shut, changed her direction accordingly and advanced along the gravelled drive. No doubt the familiar London
‘
Pea Souper
’
was much to be deplored, but there was quite a lot to be said for a guiding curb and an occasional lamp-post.

Jill had never been more pleased to hear a friendly voice and to grasp Harriet
’
s welcoming hand. She gladly relinquished her suitcase into the care of the waiting maid as Harriet drew her into the hall and closed the door. The contrasting comforts of the cosy lounge hall after the dreary drive from the station was comforting; the room was yet unlighted, but a piled log fire burning brightly in the grate sent dancing shadows across the panelled walls and the dark oak furnishings. With a sigh of sheer joy, Jill crossed the intervening space to the open fireplace and, pulling off her gloves, held her chilled fingers to the blaze.

“
This is wonderful!
”
She turned a smiling face to her friend.
“
What a lovely place you have! T
hi
s room, it
’
s perfect
!
Inside anyway, I couldn
’
t see a foot ahead of me outside.
”
She laughed as she allowed her companion to relieve her of her coat.

“
You haven
’
t changed a bit. Do you realize I haven
’
t seen you for—I suppose it
’
s nearly four years, isn
’
t it?
”
As Jill nodded in agreement, Harriet Laine appraised her friend.

Jill Fernley certainly made an attractive picture as she stood before the fire. Her soft wool dress displayed the perfectly balanced lines of her figure, and as she sank into the armchair which Harriet indicated, there was a lithe grace in every movement. The flickering shadows from the fire brought a coppery sheen to the brown hair which
cur
led softly like a halo round her head and enhanced the almost transparent fairness of her skin. Her violet eyes, heavily lashed, held a hint of laughter which was reflected in the curving line of her lips and the animation of her expression.
It was a vivid face,
one not easily forgotten.

“
Well, what
’
s the verdict?
”
Jill laughed happily.
“Y
ou make me feel like a specimen under a microscope. Have
I
grown
old or something
?”

“
No I still say you haven
’
t changed a bit.
”
Harriet Laine seated herself in the armchair facing her friend
. “
Last time I saw you was at the Savoy. You remember we had tea together
.
It was when your mother remarried; you were
discussing
future plans
,
it was then I suggested nursing. You haven
’
t regretted that decision, ha
ve you?”

The st
atement undoubtedly gave Harriet pleasure
;
her face pleasing
,
if not beautiful, expressed her delight.
“
I
’
m so g
lad
— and this job, I
’
m thrilled you took my advice and applied for it. It
’
s just the thing for
you.”
She stopped speaking as the maid, who had relieved Jill of her suitcase, now returned with a tea trolley. Although pouring ou
t
and attending to her guest
’
s needs, Harriet went on speaking.
“
St Joseph
’
s is a general hospital of course. This ch
il
dren
’
s annexe is a fairly new idea, but it was bad
l
y needed and is proving a huge success. I expect Matron told you all about it at your interview with her in London; you
’ll
hav
e
charge of this research job under Dr.
McRey.
He is a brilliant man, and was professor at Edinburgh
.
I
’
m lucky to be his assistant, he is a positive inspiration.
”
She paused as she offered a plate of home-made scones.
“
A bit tricky to work for perhaps—but you
’
ll
manage all right.
”

Jill looked up quickly; there had been an unmistakable effort on Harriet
’
s part to gloss over her last words
. “
Now what exactly does that mean? Come on, Harriet, I know you of old, let
’
s have the worst,
”
she persisted with an
enco
ur
aging smile.

“
I imagined he might be with that name,
”
Jill commented dryly.
“
But go on, let me hear the worst.
”

“
He hasn
’
t much time for the social graces—or women, but he is so kind with the children,
”
she added hastily as if that piece of information might soften the baldness of her former statement.
“
I tell you he lives for his work, and with the results he achieves, believe me it
’
s worth living for!
”

For a few moments Jill contemplated her friend in silence. Harriet hadn
’
t changed either; she would probably always be an ageless person. There was a charm about her smile which made up for any lack of beauty. Her dark hair, severely dressed, added to the calm serenity of her expression. Harriet had never given much time to her appearance, her work had always been the most important factor in her life.
“
Harriet, you are stalling,
”
Jill told her severely.
“
You
’
ve let me give up a cushy job in London to come to—what? A God-forsaken seaside town which I can
’
t even see for mist, to work for an impossible Scot who hates women!
”

That
’
s putting things much too strongly,
”
Harriet protested with a deep laugh.
“
This work is interesting, you wouldn
’
t have got any further at Baldwins, you know that. You were just in a groove. This job
’
s made for you, so I decided it was time to wake you up.
”
She handed cigarettes and took one herself, drew deeply, then exhaled before continuing.
“
I thought it would be a good idea for you to stay with me tonight, we
’
d get a chance for a long chat, then I
’
ll take you to hospital tomorrow and introduce you around. It
’
s a modern building, built on the hut system; you passed it coming from the station. It
’
s much nearer the town than this place; I
’
m almost five miles out. Did you see it?
”

“
Don
’
t be silly, I couldn
’
t see anything; we hadn
’
t gone five minutes from the station when this mist dropped down.
”

CHAINED: A Motorcycle Club Romance by Westlake, Samantha
The Haunting of Heck House by Lesley Livingston
Girl Least Likely to Marry by Amy Andrews
The Master by Tara Sue Me
The Firefighter's Cinderella by Dominique Burton
Kehua! by Fay Weldon
When the Heavens Fall by Gilbert Morris
Move the Sun (Signal Bend Series) by Fanetti, Susan
Valkyrie: Rat in the Dumpster by Tony Bowman
The Wagered Widow by Patricia Veryan
Our partner