Read To Sin With A Scoundrel Online

To Sin With A Scoundrel 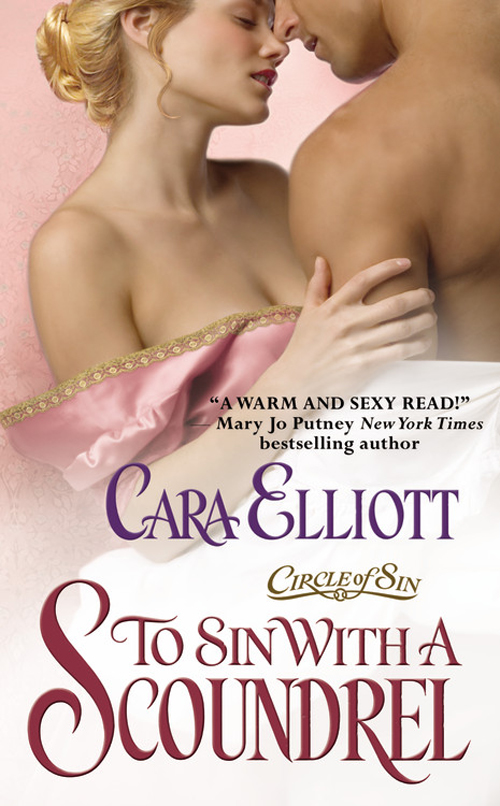 T
he earl was dabbing a bit of jade-colored oil on his wrist.

“Put that down!” Grabbing up a rag, Ciara rushed to his side. “It will burn right through your flesh.” She set to wiping off
every trace of green.

His touch was surprisingly gentle as he closed his hand around her wrist.

“I haven’t finished,” she murmured, hoping he didn’t hear the odd little catch in her voice.

Ciara had every intention of pushing him away but some strange alchemy kept her frozen in place. He kissed her lightly, the
brush of his lips feathering across her cheek. Suddenly she was no longer cold, but hot all over. Somewhere in her core a
flame licked up. Her flesh began to burn as his palms slid up her arms.

No. No. No.
This could not be happening.

Dazed, she opened her mouth to protest, only to find it captured in a far more intimate embrace. His tongue traced over her
lips, and his teeth nipped her flesh.
Then he was inside her, tasting of salt, of smoke, and some earthy spice she could not put a name to.

inspired me to see the magic of giving

A Preview of
To Surrender to a Rogue

The word looked rather ghoulish on the printed page.

Closing her eyes for an instant, Lady Ciara Sheffield reminded herself that it sounded even worse.

“Murder.” Though she said it with barely a breath, the echo seemed to shatter the stillness of the room. Seeing that the inquest
was officially closed, she had thought the past had finally been laid to rest. But apparently she was gravely mistaken.

She set aside the
Morning Gazette,
yet the flutter of newsprint was a disquieting reminder of the malicious whispers. For months following her husband’s sudden
collapse, the drawing rooms of Mayfair had been aswirl in
ondits,
each one more outrageous than the last.

At least this morning’s article had not called her a witch but instead accorded her the dignity of referring to her work as
“scientific.”

Her breakfast was now cold, and as the taste of the teaturned bitter on her tongue, Ciara crumbled a bit of toast between
her fingers. Would the
ton
never tire of gnawing on the bones of old scandal? Sighing, she angled another peek at the column of newsprint. By now the
rumors and innuendo should have died a natural death.

Oh, how she hated being fodder for gossip.
But perhaps, with any luck, her story would soon fade from the front pages.

Especially if the infamous Lord Hadley kept up his escapades.

Much as she despised wastrels in general, Ciara found herself almost liking the man for being so utterly, so outrageously
debauched. His latest antics could not help but distract the tattlemongers from her own quiet life. When it came to selling
newspapers, a reclusive widow was no match for a rakehell earl.

Not that she had any interest in learning the sordid details of this particular incident. Determined to turn a blind eye to
the columnist’s lurid prose, Ciara reached for her notebooks. And yet she could not quite help catching sight of the next
few lines…

Despite herself, she read on. She was acquainted with the fountain in question—though not with the cyprian who had apparently
consented to play Leda to Lord Hadley’s Zeus-as-Swan. According to the account, the naked female was a good deal more statuesque
than the sculpted marble. And a good deal more vocal. Apparently half of Berkeley Square had been woken by her shrieks when
the earl’s slip landed both of them chest deep in the frigid water.

That ought to have cooled their ardor, thought Ciara grimly. Not to speak of inflicting more permanent damage. It was hinted
that the earl had suffered several good-sized bruises to a rather sensitive section of his anatomy.

No doubt he was wishing that “brass balls” was not merely a metaphor.

The newsprint suddenly crackled. The coals hissed, and flames licked up to consume the crumpled wad of paper.
To hell with Lord Hadley.
And the rest of London Society, for that matter. Let them play their wicked games. She had witnessed enough malicious intrigue
and mindless debauchery to last her a lifetime. It was no longer shocking, just dreadfully dull.

Pushing aside her plate, Ciara gathered up her notebooks and hurried from the breakfast room.

“Bloody hell! Another hit, dead center through the card!”

Bloody luck.
Lucas Bingham, the Earl of Hadley, squinted in the glare of morning sunlight. He was a damn good shot, but after the three—or
was it four?—bottles of port he’d consumed over the last several hours, even the sharpest aim could go astray.

“La, sir.” One of the luscious lightskirts he and his friends had hired for the trip slipped her hand beneath his shirt. “Your
touch on the trigger is unerring. What say you to reloading and taking a shot at another sort of target?”

Before the earl could answer, Lord Farnam let out a low whistle. “Damnation, Lucas. I swear, you could shoot a farthing off
the tip of a man’s cock without doing any damage.”

Farnam joined in the bawdy laughter before replying, “I, on the other hand, have no trouble spotting your fat arse, Georgie—especially
as it’s exposed in a rather precarious position right now. So keep a civil tongue in your head unless you wish to feel the
full force of my boot.”

Greeley’s ladybird lay draped over one of the garden statues, and her embrace had angled the baron and his naked posterior
into full view. “Come, come, gentlemen,” she called. “Let’s have no talk of violence, only fun.” Her hands inched lower, drawing
Greeley’s breeches along with them. “After all, we’re all here to have a good time.”

“I’ll drink to that!” Farnam uncorked another bottle of champagne. “A toast to Lucas—our own Mad, Bad Had-ley—for giving us
such a
swimmingly
good reason to quit Town for a while. The Season was becoming a bloody bore. Nothing like a country house party to keep us
all in good spirits until the prigs have time to forget about your moonlight swan dive.”

Lucas winced as the word cut through the haze of wine.

Damn
. Up until that moment, his promise to his uncle had completely slipped his mind. It wouldn’t be the first time he had left
Henry in the lurch. Not by far. Of late, his negligence was becoming such a habit that his failure to show up at the appointed
hour was no doubt expected.

A fact that only made the prickling of guilt dig in a little deeper. And not even Marie—or was her name Marguerite?—could
caress it away.

The feeling was bloody uncomfortable. Not to speak of inconvenient, seeing as they had arrived at Farnam’s estate only at
dawn, after carousing half the night in one of the seamier gambling hells in St. Giles. Tossing aside the pistol, Lucas grabbed
a fresh bottle and gulped down a swallow, hoping to drown the host of tiny daggers jabbing against his flesh.

Instead, the ruthless little buggers intensified their attack.

“Blast,” he muttered, pressing his fingertips to his throbbing temples. “You’ve just reminded me of a pressing engagement,
Freddy. I’m afraid I’m going to have to return to town immediately.”

“Put it off,
chéri
.” Mademoiselle M began to toy with the fastenings of his breeches. “Along with your buckskins. Why rush off when we can play
a bit of slap and tickle right here and now?”

“I can’t,” he replied, grimacing as he gingerly removed her hand. That particular portion of his anatomy was not feeling very…
playful at the moment. He vaguely remembered a midnight encounter involving very cold water and very hard stone. “The truth
is, my uncle expected me yesterday.”

“But
chéri!
” She pursed her lips into a provocative little pout. “If you leave now, it will throw off the numbers.”

“Someone will have to double up.” Lucas watched Farnam take another swig of wine and then thrust himself between his companion’s
thighs. “Freddy looks willing to give his pump handle a few extra turns.”

The lightskirt narrowed her kohl-rimmed eyes. “That leaves me with the short end of the stick, so to speak. I didn’t make
the journey out here to sit around and twiddle my thumbs. The deal was that I got
you
.”

His headache seemed to be taking a turn for the worse. Fishing a wad of banknotes from his coat, Lucas tossed them over. “Here,
perhaps counting these will keep your clever little fingers busy.”

“Don’t be such a spoilsport, Hadley,” called Ingalls. He was lying spread-eagle on the grass, smoking a cheroot. “Surely another
day or two will make no difference to your uncle. After all, he isn’t likely to be going anywhere.”

His other friends found the quip uproariously funny.

“I say, that’s a good one, Fitz,” said Greeley, wiping the tears of mirth from his cheeks. “Not going anywhere! Ha, ha, ha.”

The casual cruelty concerning his uncle’s infirmity hit him like a slap in the face. Lucas felt a surge of anger well up inside
him, and for an instant he was tempted to lash out and smash the slurred smiles to a pulp. But if anyone deserved to be pummeled,
he realized, it was himself. The other three simply followed his example, as they had since their schoolboy days at Eton.

Mad, Bad Had-ley.
Hell-bent on raising the art of outrageous behavior to a science. The pursuit of pleasure, executed with perfect precision.

He found himself frowning. Was he really such a sodden, self-absorbed sot? A reckless reprobate reeking of spirits and sex?