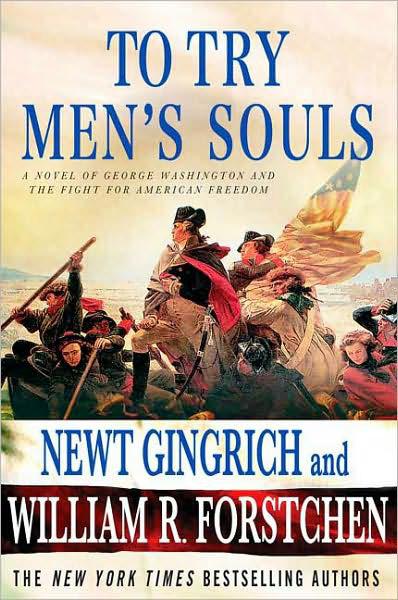 AND THE FIGHT FOR

This is a work of fiction. All of the characters, organizations, and events portrayed in this
novel are either products of the author’s imagination or are used fictitiously.

To try men’s souls : a novel of George Washington and the fight for American freedom / Newt Gingrich and William R. Forstchen.——1st ed.

It is humbling to write this dedication. For General George Washington and the “gallant few”——the 2,500 men——who crossed the Delaware River with him on the night of December 25—26, 1776, facing impossible odds, and by so doing, saved a nation.

The genesis of this book is a curious one and might be of interest to some of our readers. More than a decade ago, our team (Gingrich, Forstchen, and Hanser) got together to talk about writing historical fiction, and the very first topic on the table, in fact one that we worked on for months, was the American Revolution. For a variety of reasons, our attention finally shifted to the American Civil War, and then the Second World War in the Pacific.

For our fans of the “Pacific War” series, please excuse this change of topics. We have not let that storyline drop and will indeed pick it up again in the near future; it is just that a unique moment occurred that we had to follow through on.

Shortly after the 2008 election, in a conference call with our remarkable editor, Pete Wolverton, it was Pete who asked us if we might be interested in a brief hiatus from our story focusing on Pearl Harbor and consider a topic related to the American Revolution. There seemed to be a certain resonance at that moment. Pete felt that a novel that looked back to the origin of our country and its struggle for freedom would be a timely subject that we should consider. Little did Pete know what he was unleashing; for in fact we already had a working outline and even some sample chapters filed away from more than a decade ago.

We therefore had an editor urging us to consider this topic along
with research and writing that was gathering “dust” in the cyber-world of our computers, and thus the work started.

For Bill Forstchen there was a particular personal connection. After graduating from college early in the 1970s he had worked as a “reenactor” at Valley Forge and at Washington Crossing as a private in the Continental Army of General Washington. Some of the incidents that occur in the novel are real personal experiences that he observed, and even after thirty years, left him awed with the endurance of those who experienced it “for real,” and most definitely left him “chilled” as well.

It is hard for any of us to grasp today the suffering experienced by Washington and his troops during that bitter autumn and winter of 1776. We who are so pampered with luxuries can barely comprehend the experience of marching all night——barefoot——in a freezing December storm, with little hope other than “victory or death” at the end of that road. We were a nation so reduced in poverty that men literally marched with the hopeful prayer that if they survived, their reward would be a pair of shoes, a warm meal snatched from an enemy’s larder, and a few hours’ rest under a dry roof. This they endured across all the bitter winters from 1775—1783. It is to this gallant few that we owe all that we have today.

It is why we felt compelled to write this book; to remember them——the barefoot privates with frostbitten and bleeding feet, and the general who never surrendered his hope for a free and independent nation.

We were also intrigued by the power of the pen during those dark days of 1776, and thus did the story of Tom Paine become part of this tale as well. There have been unique moments in history where the written and spoken word has indeed proven to be mightier than the sword: Lincoln at Gettysburg redefined the Civil War as a conflict about the meaning of the word “equality”; Churchill in the summer of 1940 roused a nation to fight what many thought would be a hopeless last stand against totalitarianism, but for which at least he and his stout English comrades would have died standing
on their feet rather than submit on their knees; and Thomas Paine, who with but one short essay starting, “These are the times that try men’s souls . . . ,” fanned back to life the dying embers of a revolution. They show us that no matter how dark the hour, then or now, all that is required is a few gallant men and women who refuse to surrender.