To Wed a Scandalous Spy 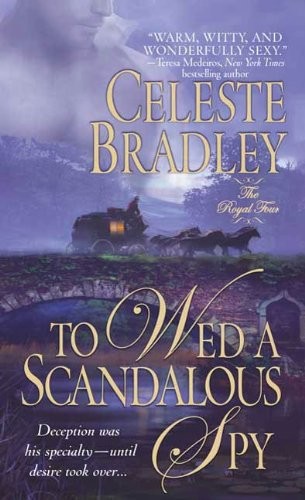 TO WED A SCANDALOUS SPY

All rights reserved. No part of this book may be used or reproduced in any manner whatsoever without written permission except in the case of brief quotations embodied in critical articles or reviews. For information address St. Martin's Press, 175 Fifth Avenue, New York, NY 10010.

For my darling Grace,

who always looks closely at life.

Thank you to all the usual suspects!

How can I ever make it up to you?

Every ruler needs a few men he can count on to

tell him the truth

—
whether he wants to hear it or not
.

Created in the time of the Normans, when King William the Conqueror found himself overrun with "advisors" more concerned with their own agendas than with the good of the whole, the Quatre Royale were selected from the King's own boyhood friends. Lords all, and bound by loyalty rather than selfish motives, these four men took on the names of ruthless predators while acting as the Quatre, keeping their lives and identities separate from their true roles…

… to act as the shield of deceit and the sword of truth in the name of the King.

Courageous as the Lion

Deadly as the Cobra

Vigilant as the Falcon

Clever as the Fox

The appointment is for life—the commitment absolute. Bonds of family, friends and even love become as insubstantial as a dream when each hand-selected apprentice takes the seat of the master. All else is merely pretense, kept for the sake of secrecy and anonymity. For it is true that the iron bars of duty cage the hearts and souls of…

Another day, another suitor carried off in pieces.

Willa Trent sighed as she bent to pluck a stone from the country lane. Poor Timothy, so young to be scarred for life. He'd been so brave about it all.

"Don't fret, Miss Willa," he'd said. "I'm sure to be up and walking in no time." And he'd smiled at her even while his leg was being splinted and his bleeding head was wrapped.

Well, no more. From now on, the affliction would be hers to bear alone. Not that it had ever harmed her directly, but then, if a future of lonely spinsterhood wasn't harm, what was?

She drew a deep breath. That was the past—this morning counted as past, didn't it?—and she had never been one to waste today on yesterday. Just as her dream of seeing something of the world had never come true, so her dream of belonging in a family of her own seemed as though it would never come true. She was sure that in time she would adjust.

Not that she was disheartened or anything of the sort, but she had decided to spend the rest of the day on her own, away from both the sympathy and the smirks of the villagers. With a sigh, Willa left the lane and returned to the field beyond the hedge. As usual, she was cheered by the hues of the evening sky and the green of the rolling Northamptonshire fields.

Which hid the despicable small secrets she was determined to uncover today. It was not yet hunting and trapping season, and she had just found another nasty saw-toothed trap near a clear-running beck. All she needed to do was trigger it before doing her best to smash it with a rock.

Willa closed one eye, just as she had been instructed to by the young boy who had lent her the slingshot Unfortunately, little Seth wasn't here now, so she couldn't ask him which eye. She shrugged. One eye was no doubt as good as another. Aiming for the precise center of the round, flat trigger of the rusted poacher's trap, she pulled back the strap of the slingshot as far as possible and let go.

Grim anticipation rose from deep within Nathaniel Stonewell, Earl of Reardon, as he urged his gelding to an ever-increasing pace down the Northamptonshire road. He was close behind his quarry now. Blunt took one stride for every two of Sir Foster's lesser mount, ruthlessly eating up the distance between them.

This afternoon Nathaniel had paused in his pursuit to water Blunt at a coaching inn, only to learn that a man matching Foster's description had passed through mere hours before. Since then, Nathaniel had kept Blunt to a punishing pace that only the greathearted thoroughbred could match. Night would fall soon, and Nathaniel had great hopes of catching up to Foster when the traitor took his rest in the village that Nathaniel had been informed lay shortly ahead.

Nathaniel's eyes narrowed against the wind created by Blunt's gallop and he rose in the stirrups, riding as lightly as a jockey, or at least as lightly as a man of his size could ride. So close…

Foster was a greedy coward but a cunning one nonetheless. If the last free member of the traitorous Knights of Fleur made it to the teeming streets of London, it would take an army to ferret him out. Nathaniel didn't want an army's help.

He wanted Foster for his very own. For the betrayal of England, Foster must pay. For the loss of everything Nathaniel had ever held dear?

For that, Foster would pay at Nathaniel's hands.

A political cartoon had unintentionally revealed Nathaniel's involvement with the French sympathizers, the Knights of the Lily. Of course, Nathaniel had infiltrated the group on behalf of the Crown, but the public could hardly be informed of that. In the end, this misconception had been useful in keeping the leader's son, the apparently innocent Louis Wadsworth, free of public taint or scandal. This was not normally a concern of the Royal Four, but the Wadsworth munitions factory had been considered vital to the production of arms for the war with Napoleon.

So the elder, and now conveniently dead, Edward Wadsworth had been declared a hero for exposing the traitors, Nathaniel among them. Being a scandalous traitor was the perfect cover for Nathaniel's true position as a secret power in the government.

Nevertheless, it was bloody painful to watch his treasured reputation shatter like crockery on the cobbles. Nathaniel's personal honor was the armature of his nature, the very framework about which he lived his life. Now, the people of his acquaintance—some of them good, honest folk whose opinion he valued—would sooner seat a card-cheat at their table than the infamous Lord Reardon.

Your reputation is little enough sacrifice for your country
, he reminded himself.

Another voice from the past, Lord Liverpool's voice, echoed the thought:
How can you claim willingness to sacrifice your very life if you aren't willing to give up something less tangible as well
?

The Prime Minister had been quite correct of course. Nathaniel had been utterly willing to take the title of traitor to protect the interests of England. Willing and most able.

It was the Prime Minister's opinion that not only was Nathaniel's disgrace royally convenient, but it also provided a marvelously devious cover for the Cobra.

After all, who would suspect that the man known far and wide as Lord Treason in fact was a member of the elite and untouchable secret order known as the Royal Four?

Yes, it was all very convenient and desirable—and the least he could do for his country. It was marvelous how his "exposure" and subsequent shunning by Society at large had left him with so much time to attend to those little matters deemed of interest by the Four.

Like Sir Lucian Foster—an active, if somewhat cowardly, member of the Knights of the Lily during the latest contretemps who had fled the country before he could be apprehended. Now he was back on British soil.

The Knights of the Lily were dead and it was unlikely that they would ever rise again, but Foster was a loose end that Nathaniel, for one, wanted tied neatly away. Preferably with a noose.

Nathaniel's family had denounced him. His countrymen hated him. He was known far and wide as Lord Treason. He had paid his price. Now it was Foster's turn.

A grim, predatory smile crossed Nathaniel's lips as he bent his head farther into Blunt's whipping mane and urged the gelding to even higher speed.

I have you, you bastard.

That is, he did until all hell broke loose.

The curious thing about slingshots, Willa discovered, was that they rarely shot straight. Or perhaps that had been the wrong eye, after all.

The pebble in the sling took off in quite a different direction from the gaping-jawed trap at which she had aimed. Willa took some pride in its speed until she realized she had missed.

The stone shot straight toward the road, piercing the thick hedge in its way with a mere whisper and a snap.

Thunk
. The stone hit something hollow.
Crack
. That sounded like the snapping of a branch.
Thud
. Something hollow hit the road, she was sure of it.
Buzz
. Buzz? Insects? Angry insects, from the ferocity of the hum.

No one was on the lane, she told herself. Likely nothing would—

The thunder of racing hooves cut the evening air even as she had the thought.

There came another high equine scream and a startled curse. Next were thudding hoofbeats and the sound of something much more solid hitting the ground.

Willa ran after her missile, following its beeline path. Torn from a stem, a single leaf drifted from the bushes between her and the road.

Willa squirmed through the hedgerow with no regard for her gown or her hair. Not that her pins were still in place after her evening's romp in the fields. She'd been gone from home since Timothy had been carried off to the doctor in the next village, and her hair was some the worse for it.

She popped through the hedge to see a heap of something lying in the lane. Tiptoeing closer, she strained to see what it was. Oh dear. The something heavy that had fallen was a man. A very large man.

The Trouble With Scarecrows (The Trouble With Men Book 2) by Dorlana Vann
El jardín colgante by Javier Calvo
Waiting for Patrick by Brynn Stein
Oda a un banquero by Lindsey Davis
Capshaw's First Command by Josh Hilden
The Father's House by Larche Davies
Exile's Challenge by Angus Wells
Peggy Sue (The T'aafhal Inheritance) by Hoffman, Doug
This Side of Heaven by Karen Kingsbury
Faithful by Kim Cash Tate
Our partner