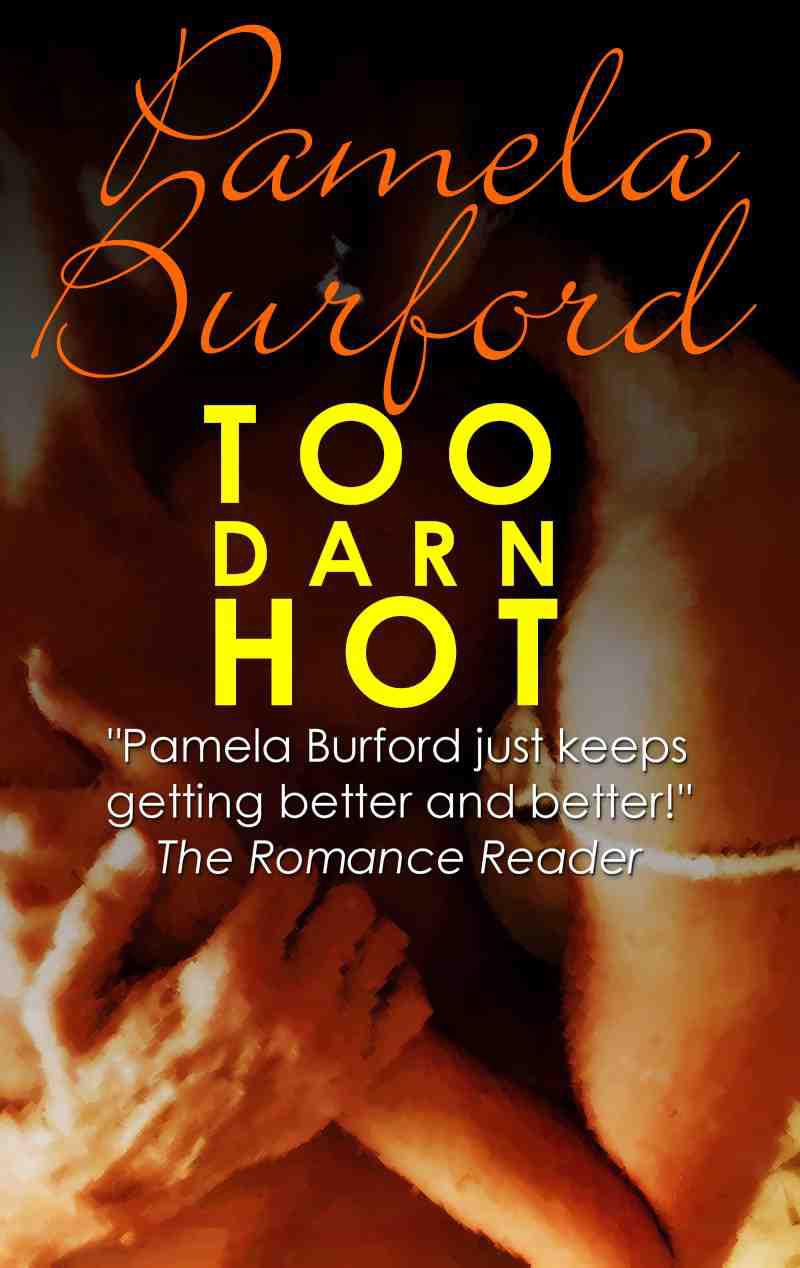 Rule Number One: Never mix business with pleasure. New York restaurant reviewer Lina Holland learned that lesson by watching her beloved mentor self-destruct, and she's not about to make a similar mistake, even if the chef and owner of the restaurant she’s secretly reviewing is the most sexalicious hunk who ever seared a T-bone. It's not enough to be scrupulously impartial, she must avoid even the merest whiff of favoritism. Date a restaurateur? She can't allow herself to even think about it. Okay, she thinks about it, but that's all. Really!

Chef Eric Reid is a widower struggling to raise twin boys and keep his fledgling Long Island restaurant afloat long enough for word of mouth to lift it out of the red. Little does he suspect that the intriguing new customer groaning in ecstasy over his bourbon pecan tart is none other than the legendary Lina Holland, the reviewer whose thumbs-up could spell the difference between colossal success and the extermination of his lifelong dream. No one in the industry knows what Lina looks like, but he's convinced she's a brash, zaftig shrew who applies her makeup with a putty knife. When he finds out how wrong he is, the fun really starts!

Throw in a buttinsky roommate, a lecherous ex-husband, bribery by chocolate, and the fishing excursion from hell, and the result is, well, too darn hot!

Originally published by Zebra books, a division of Kensington Publishing Corp. About 48,000 words.

Copyright 1999 Pamela Burford. All rights reserved. With the exception of quotes used in reviews, this book may not be reproduced or used in whole or in part by any means existing without written permission from the author.

This e-book is licensed for your personal enjoyment only. This e-book may not be resold or given away to other people. If you would like to share this book with another person, please purchase an additional copy for each recipient. If you’re reading this book and did not purchase it, or it was not purchased for your use only, then please purchase your own copy. Thank you for respecting the hard work of this author.

This book is a work of fiction. Any resemblance to persons, living or dead, or to places, events, or locales is purely coincidental.

Other books by Pamela Burford

I Do, But Here’s the Catch

One Eager Bride To Go

For my wonderful husband, Jeff, with all my heart

“Hey, Joy. Do you smell smoke?” Lina Holland glanced over her shoulder at the closed door to the restaurant’s kitchen. A surprise flambé, no doubt.

The door swung open and the frazzled waitress darted out, performing a tricky balancing act with four laden salad plates. Before the door slammed shut, Lina caught a brief glimpse of the chef, an imposing, white-clad figure gesturing animatedly and barking orders at his small staff.

Joy pushed away her wilted salad and sniffed the air. “Jeepers! I don’t know what’s going on tonight. It’s like the place has just...fallen apart.”

Lina raised an eyebrow. “You told me this restaurant’s outrageous.”

“You told me this restaurant belongs in Greenwich Village, not out there in the boondocks of Rocky Bay, Long Island. You told me—” Lina raised a finger “—and I quote: ‘The Cookhouse is a buried treasure just waiting to be unearthed.’ Well, as far as I’m concerned, this is one treasure that—”

The Cookhouse did have one thing going for it. It was a feast for the eyes, if not the belly, styling itself as a combined cooking school, restaurant, and art gallery. On the white walls of the three small dining rooms hung the cheerful work of a local Long Island painter. Daisies in charming, one-of-a-kind bud vases adorned the white-draped tables, along with whimsical salt and pepper shakers. Lina found herself toying with the set on her table, shaped like a gun and holster.

She’d been impressed and, yes, hopeful when she first arrived. Perhaps, she’d thought, Joy was actually on to something here. Stranger things had happened.

Unfortunately, the favorable first impression promptly went up in smoke—literally. The food and service were lousy. End of story. The Cookhouse could fill its walls with Van Goghs and Vermeers, for all she cared. No little pretties ever saved a lousy restaurant.

And no one knew that better than Lina Holland.

Joy said, “Eric—that’s The chef, he owns the place—figures that in a few weeks when the beach season starts, things’ll pick up. I mean, when the bridge and tunnel people discover this gem in their own backyard—”

“Joy, we’re the bridge and tunnel people.” Lina’s roommate still talked like a Manhattanite, though she now lived in Queens. “And the only thing I want to `discover’ about this place is the exit.”

Lina looked up at the blond youth filling their goblets with ice water.

“Adam’s in there—” he gestured with the pitcher toward the kitchen “—washing pots.”

“Lucky you. So what gives? Your dad shorthanded tonight?”

“Then Joe does show—falling-down drunk. Dad had to kick him out—”

“Young man, we’re still waiting for water,” called a diner at the next table.

Joy turned to Lina as Daniel moved on. “Joe’s the dishwasher.”

“Fascinating. Let’s go.” Lina started to signal the waitress for the check, and Joy grabbed her arm.

Lina stared pointedly at the cracked, dried-out rolls and the pitiful excuse for a salad. “Just thinking about the main course scares me.”

Out of six entrées listed on the menu, only two had actually been available: braised duck with Oriental plum sauce, and lamb chops Provencal.

Daniel elbowed the kitchen door open and disappeared through it. Lina heard a deep male voice, agitated but controlled. Reflexively she swiveled toward the sound, just as the door closed.

She turned back to her roommate. “Joy, you’ve whined at me for thirty-four years. Have you ever known it to work?”

Lina tossed her napkin on the table and stood, smoothing out her blue silk sheath dress. “This place should stick to art. You can stay and wallow in this new masochistic streak you’ve developed. I’m getting a pizza. With everything.” She watched her friend ruffle her bangs with a fierce exhalation—something else she’d been doing for thirty-four years. “And I’m not saving you any.”

The flushed, overworked waitress appeared out of nowhere and unceremoniously plunked two duck dinners on the table.

“MynameisBetsyenjoyyourmeal,” she gasped. Before they could ask her to remove the uneaten salads, Betsy was a memory.

Lina slumped back into her chair and stared sullenly at the half duck before her, ignoring the crisp slices of roasted potato and the mélange of spring vegetables. “I hate duck.” She poked it with her fork, refusing to admit that the meal looked pretty good. And smelled better. “Almost as much as I hate lamb chops.”

“And a good thing, too, ‘cause you’re getting the whole bird.” Lina pushed her plate away.

From behind her came a distinctive male voice—raspy-soft and kissed with a touch of laughter. “You picked the wrong night to bring someone new, Joy.”

Lina had never heard a voice quite like that. Not exactly husky. More like...like honey and smoke, she thought.

She felt knuckles brush her shoulders, and sensed the weight of someone leaning on her chairback. A large someone. A warm someone.

Lina twisted in her seat to look up. It was the man she’d spied through the kitchen doorway—the chef and owner of The Cookhouse. He appeared just as formidable close up.

“Lina,” she interrupted, offering her hand, deliberately forestalling her friend’s use of her full name. No point in letting Chef Reid know she was Caroline Holland.

“Welcome to The Cookhouse, Lina.”

As Eric’s big, callused hand closed around hers, she couldn’t help but notice the subtle flex of some pretty impressive deltoids under his double-breasted chef’s whites. The welcoming grin he bestowed involved his entire face, from the tired-looking dark brown eyes framed by laugh crinkles, to the generous furrows bracketing his mouth. His lashes and thick eyebrows were several shades darker than his wavy reddish brown hair.

She returned his warm smile and gently withdrew her hand when he seemed in no hurry to release it. She wondered if he was checking her out. Did Chef Reid make it a habit to scout out fresh meat in the dining rooms?

“Are you a teacher, also?” Eric asked.

“I’m a writer.”
Don’t ask me what I write,
she silently pleaded. Her smile remained frozen for an awkward moment while she cast about in her mind for something to compliment.

“Lovely place, Eric. The decor is exquisite. Elegant but fun.”

His eyes were the color of black coffee, she thought. No, make that espresso. No—coffee liqueur. Yes. Two deep, fathomless pools of coffee liqueur.

After a few moments, it dawned on her that he was waiting for her to continue. She turned to her companion. “Isn’t that right, Joy? Elegant but fun?”

Her mouth full, Joy nodded and, with a negligent wave of her hand, urged Lina to continue.

Thanks for nothing
, she thought.

Nodding toward the wall, Lina summoned her most worldly mien while her fingers began pleating the napkin in her lap. “I’ve been admiring the paintings.”

Eric crossed his long arms over his chest. His sleeves were rolled up nearly to the elbow, revealing well-developed forearms with a generous sprinkling of dark hair. A brief flash of gold caught Lina’s eye, and she noticed for the first time the heavy, barrel-shaped gold ring. On the third finger of his left hand.

Figures,
she thought, then mentally scolded herself. Of course he’s married—the man does have twin sons, for heaven’s sake. And anyway, she’d never mix business with pleasure. That particular rule was hardwired into her cerebrum, after what happened to Mercy Litton.

Eric’s Kahlua eyes briefly lit on the artwork she’d praised. He waited for her to continue.

What were they talking about? She cleared her throat. “A...unique combination. Restaurant and art gallery. It...works, you know?”

Long, silent moments later, she turned a help-me-out-here smile on Joy, who was engrossed in dismembering her duck and took no notice.

Damn you, girl. Get with the program.

Watching her friend devour that bird with such unrestrained gusto brought to mind the pizza she’d threatened not to share. It had been ten hours since she’d put anything in her stomach. Without warning, that treacherous organ rumbled softly.

She shot a quick glance at Eric. He hadn’t heard. Well, thank goodness for small favors.

“You sure you don’t want yours?” Having inhaled her own meal, Joy now commandeered Lina’s. With each forkful, her eyes rolled in delight. She moaned and grunted and hummed in gustatory rapture. “Mmm...I can’t believe you don’t love this.”

Lina’s stomach responded with a yowl of indignation—mercilessly loud and prolonged, and spanning an impressive range of octaves.

The man at the next table looked up from his lamb chops.

Wide-eyed, Joy hurriedly swallowed a mouthful of duck. “Cool. Sounds just like the brakes on your old Honda. Can you do it again?”

The Cruel Stars of the Night by Kjell Eriksson
Dawn of Darkness (Daeva, #1) by Daniel A. Kaine
Woodsburner by John Pipkin
Bound to Them by Roberts, Lorna Jean
Sacred Dust by David Hill
Fight by P.A. Jones
The Other Mitford by Alexander, Diana
Chasing The Dead (An Alex Stone Thriller) by Goldman, Joel
The Wolf's Pursuit by Rachel Van Dyken
The Solomon Curse by Clive Cussler
Our partner