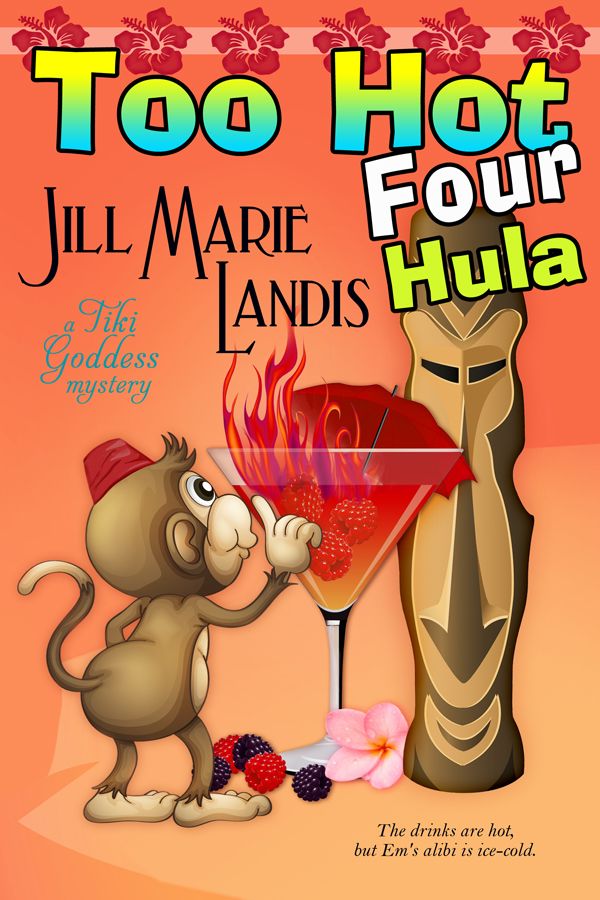 Crime-solving sleuth Em Johnson and her Uncle Louie, owner of the famous Tiki Goddess Bar on Kauai, head for the Cocktail Shake Off Competition in Honolulu. What is supposed to be a fun trip to a mixologist contest turns weird when Louie’s legendary “Booze Bible” is stolen, and Em’s ex-husband winds up dead—with Em the number-one suspect. Sexy Kauai detective and part-time fire dancer Roland Sharpe rushes to Em’s side along with the unpredictable Hula Maidens, whose detective skills are even more haphazard than their dance routine at the island tiki bars. Toss in an escaped monkey and a killer who wants to make this the Last Call for someone’s honky-tonk tiki-tossing night out, and it’s going to be another wild escapade for Em and her Hula Maidens.

Mai Tai One On

Three To Get Lei’d

Em Johnson, manager of the Tiki Goddess Bar on Kauai’s North Shore considered herself a people person, but she’d rather be talking to anybody other than her ex, Phillip.

“Thursday at eleven thirty is fine,” she said into her cell. “I’ll see you then.”

She slipped her cell in the pocket of her capris and turned to admire the view of Diamond Head and the skyscrapers of Waikiki spread out along the crescent of white sand. Breakers rolled in slow and easy, the perfect size for a multitude of fledgling surfers and their beach boy instructors.

From the twentieth story of the Ali’i Tower at Hilton Hawaiian Village, the surfers on their boards looked like matchsticks bobbing on the water. The ocean was crystal clear and aquamarine blue, the coral reefs shadowy stains beneath shimmering blue-green glassy water. If you knew what to look for, it was easy to spot the occasional sea turtle, even from this height.

She turned away from the luscious view to continue unpacking. She’d accompanied her uncle Louie Marshall, owner of the Tiki Goddess Bar on Kauai to the Western Regional Division of the National Cocktail Shake Off competition.

The mixologist who concocted the winning cocktail would go on to compete in the nationals in St. Louis. Anyone who’d ever visited Louie’s famous Tiki Goddess watering hole figured he had the contest in the bag. Not only had he been concocting outstanding cocktails for at least half a century, but he’d written a legend about his inspiration for each and every one.

She’d just tucked her cosmetic bag into the top dresser drawer when the connecting door to the sitting room in the suite she shared with her uncle banged open. Louie Marshall came rushing in.

Louie’s thick, silver-white hair was always perfectly combed, but not now. It stood out as if he’d been pulling on it. His face was florid. Her uncle wasn’t given to high drama, so Em was immediately alarmed.

Until now, her uncle had been riding the crest of a wave of fame ever since the reality show
Trouble in Paradise
spotlighted his bar and the Hula Maidens, a group of enthusiastic, if not talented, mostly senior aged dancers. Now he looked like he was going to stroke out.

“My Booze Bible! I just finished unpacking my stuff, my lucky cocktail shaker and my promotional swizzle sticks. I picked up my satchel and thought it felt kinda empty. Because it is empty! My notebook is gone.”

Em reached for her cell. “Stay calm, okay? I’ll call Sophie and tell her to FedEx your copy over. It’ll be here tomorrow.” As she started to hit the number for the Goddess, he whispered something.

“What?” Em realized he’d never definitively answered her when she’d asked about making a copy of his recipe notebook before they left Kauai.

Her uncle sank into a chair, rested his elbows on the nearby desk, and cradled his head in his hands.

“I never had a copy made.” He gazed up at her, looking sheepish. “I was afraid to take it to the business center. I thought someone might steal my recipes now that we’re all so famous.”

“And now they have. The whole notebook.” It was all handwritten. There was no file on a computer, no back up.

“Who would do such a thing?” he moaned.

“Your competition for one.”

“You think so? I haven’t even gone down to the registration area yet. How would they even know I’m here?”

“Well, there
was
that minor ruckus in the lobby when we checked in. Who doesn’t know we’re here?”

“TOO HOT FOR hula? Are you kidding me? It’s never too hot for hula, Em. Never.”

“Sorry, Kiki.” Em added a shrug to her apology. She should have known she’d hit a nerve when she casually asked Kiki Godwin, the overenthusiastic, self-appointed leader of a troupe of senior hula dancers, if it was too hot for the old gals to dance tonight.

“I don’t want any of you passing out on stage,” Em added.

Em knew Kiki would never call off a Hula Maiden performance even if Kauai was in the middle of a Category Five hurricane and especially not tonight when they were giving Uncle Louie a big send off to the Western Regional Shake Off Competition.

Em lingered with Kiki in the open doorway to the ladies’ room the Maidens used as a dressing room. Kiki was encased in red faux-velvet from the neck of her ruffled muumuu to her bare toes. She pulled a wet paper towel out of her low-cut bodice and blotted a bead of perspiration headed down her temple. Her neck was wreathed in three thick strands of colorful plumeria lei, and clusters of plumeria and various varieties of ferns covered the entire left side of her head.

“That heavy dress must be murder.” Em regretted uttering the word murder aloud. The bar had become as famous for its connection to homicides as it was for the outstanding food and beverages they served.

“Okay, I’ll admit, it is hotter than Hades under this dress.” Kiki fanned herself with the crumpled towel. “But the show must go on. Besides, this isn’t tonight’s performance costume. I wouldn’t dare parade around in that before we take the stage.”

Em followed Kiki’s gaze and checked out the bar. Every table was full to overflowing. One man seated near the stage had been forced to balance his dinner plate on his knees, but he was still chatting and smiling away. Every carved tiki barstool was occupied. A standing room only crowd filled tables and milled around on the outdoor lanai.

“Looks like the entire North Shore is in the house,” Kiki noted with smile.

“Along with any tourists who talked their way into a reservation,” Em added.

“Nothing like a party to bring all kinds of folks together. What a tribute to Louie. Everyone expects him to win, you know.”

“I hope so,” Em said. Especially since she was going to go with him and would be there to see it.

Kiki reached up and gingerly patted her floral hair adornments.

“I think I’d better go put a couple more bobby pins in my flowers. See you after the show.” She hurried back into the ladies’ room where the other dancers were busy with their own last minute primping.

Em would have said break a leg, but where the Hula Maidens were concerned, anything could happen and usually did.

Thankfully things had been pretty calm over the last few weeks. The bar was in the black financially for the first time in years, and business showed no signs of slowing down.

Em left the small alcove near the ladies’ room, and deciding she’d never make it through the throng to the table where Louie was presently holding court, she slipped behind the long koa wood bar where bartender Sophie Chin was a symphony in motion.

The young woman automatically grabbed glasses, lined them up on a waiting tray and filled them with ice. Not once since she started working at the Goddess had the twenty-three-year-old lost her cool. Even the overflow crowd lined up three deep around the bar didn’t fluster Sophie. She had come in early that morning to help set up, and she was still going strong.

“How are you doing?” Em asked her.

She looked up at Em. Her right brow was studded with silver rings.

“I’m hanging in. I don’t think one more person can squeeze into this place. I hope the fire marshal doesn’t stop by.”

Em laughed. “He’s already here with his entire
ohana
. They got here two hours ago to score a table together. He doesn’t look concerned.”

“He and Louie must go way back, I hear.”

“Who doesn’t go way back with my uncle? He never met a stranger.”

Seated up front near the stage, the still handsome seventy-two-year-old Louie laughed along with a couple seated at his table. The middle-aged snowbirds from New York called Kauai home when their home state was buried in snow.

“How is the drink special going over?” she asked Sophie.

The two-for-one they were featuring was Louie’s famous “Great Balls of Fire,” the cocktail created in honor of a neighbor whose body ended up in the pit where they roasted luau pigs behind the building.

Sophie shrugged. “What’s not to like about two kinds of rum and Triple Sec mixed together with ginger syrup infused with Tabasco?”

“We ran out twenty minutes ago,” Sophie said.

“Flora may have some in stock, but if we get them from her shop we’ll have to pay retail. She doesn’t give
kama’aina
discounts.” Flora Carillo, one of the Hula Maidens, owned a trinket shop in the little town of Hanalei a few miles down the road.

“True dat.” Sophie picked up an open bottle of Tabasco and shook it over the glasses lined up on the tray. After she set the bottle down she took a second to glance over at Em.

“Mahalo again for trusting me to run this place while you and Louie are off island.”

Sophie shrugged. “I never thought I’d be assistant manager of anything, let alone a place as popular as the Goddess. I can sure use the raise.”

“There’s no one else we trust more, believe me. The downside is that you’ll have to stay at the house while we’re gone and bird-sit David Letterman.”

“Funny”—Sophie shook her head—“I don’t see a downside to housesitting on the beach, listening to the sound of the waves hitting the reef out front, lying in the sand looking up at the stars after work, feeling the trades drifting in off the water. All I have to put up with is one very spoiled macaw.”

“Spoiled? Dave’s worse than spoiled. Just remember not to put your fingers anywhere near the cage.”

“Louie left me some tongs for putting food into the feeder.”

“Did he leave a list of Dave’s favorite drinks?”

Once the reality show centered around the Goddess,
Trouble in Paradise
, hit the air, “David Letterman,” Louie’s taste-testing macaw, became as famous as the rest of the Goddess
ohana
. Louie depended on David Letterman to help him tweak his recipes until perfected. The sight of the parrot passed out on the floor of his cage assured Louie that another legendary cocktail had been born. The parrot was so popular Flora couldn’t keep plush Letterman toys in stock in her gift shop.