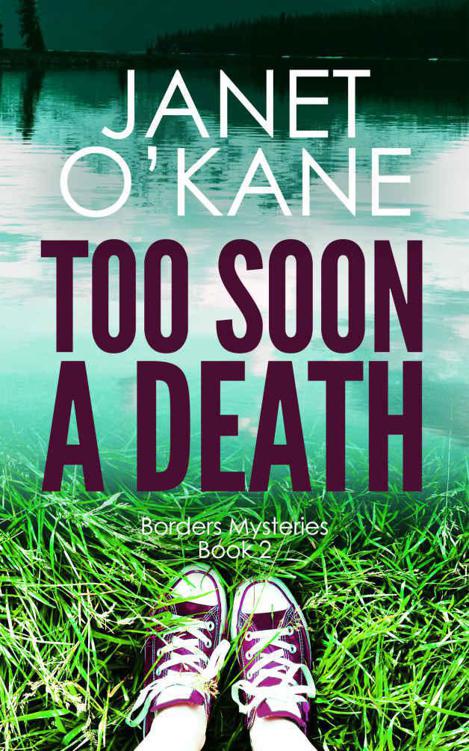 TOO SOON A DEATH

TOO SOON A DEATH

All rights reserved. No part of this e-book may be reproduced in any form other than that in which it was purchased and without the written permission of the author.

This e-book is licensed for your personal enjoyment only. This e-book may not be re-sold or given away.

This book is a work of fiction. While many of the Borders locations I describe are real, the village of Westerlea is not. With the exception of the individuals who agreed to appear as themselves in this novel, any resemblance to actual people, living or dead, is coincidental.

Now Zoe understood the police officer’s reluctance to bring her here. He had wanted to save her from having to slither down this steep, pebbly slope, not from seeing what lay beyond it. She reluctantly took his arm and clung to him during their descent. Once the terrain became flat and even, she broke free and strode along the grassy path, spotting a protruding tree root just in time to avoid tripping over it.

The River Tweed came into view, as did about a dozen people wearing white coveralls. They milled around, their actions and interactions seemingly random, although Zoe knew each would be carrying out an assigned task. One of them, a short woman carrying a clipboard, broke away from the rest and approached Zoe to ask her name.

The constable who’d brought her here spoke before she had a chance to. ‘This is Doctor Moreland from the Westerlea practice. I was told to fetch her.’

The woman noted Zoe’s name and the time of her arrival, then stared at her stomach and the calf-length dress stretched across it, obviously struggling over whether to insist on her donning a coverall. In the end, she merely handed Zoe a pair of latex gloves then led her towards the river.

Erecting a pop-up tent had been impossible, so despite the efforts of the police officer watching over it, the body was overlaid with countless flies. As each flap of the officer’s arms saw some off, yet more took their place. Abandoning all pretence of sure-footedness, Zoe accepted the help of another officer to cross the narrow channel of sandy mud and step onto the first of a series of overlapping flat stones which jutted out into the Tweed. Although it was only mid-morning, heat bled through the soles of her sensible shoes.

As she picked her way over the stones, someone called, ‘Doctor’s here,’ and the officer standing guard over the body moved to give her more room. She stepped forward, batting away the flies which instantly swarmed around her. Bending over was already uncomfortable and would soon be impossible. Lucky, then, that most of her patients could sit, stand or lie on a couch to be examined. Unlike this poor individual.

The dead boy looked about fourteen. He was skinny with short black hair, and he lay on his side, arms outstretched in front of him as though reaching for something. His uppermost hand was swathed in a grubby bandage. The back of his blue tee-shirt had come untucked from a pair of faded jeans and both his shoes were missing, as was one sock.

A memory flashed into Zoe’s mind of a scene in a film, a heavily pregnant police officer leaning over a dead body in the snow. Her throat constricted as she also recalled the occasion on which she’d watched it.

She swallowed hard. ‘He’s so young. Just a boy.’ His mother was probably not much older than her.

‘Chinese, do you reckon?’ the constable said.

The boy’s round face and the epicanthic fold in his left eye certainly suggested he was of Asian descent, but Zoe knew from working at a large city hospital that guessing a person’s ethnicity in this way left a very high margin of error. ‘Maybe,’ she said.

The flesh surrounding the right eye was so swollen that he wouldn’t have been able to open it when he was alive. The constable reached past Zoe to point at the inch-long gash which followed the line of the boy’s cheekbone. ‘Could’ve hit his head going in. Knocked himself out and drowned.’

‘Morning, Doctor.’ The voice sounded familiar, but before Zoe could turn around, the speaker stood beside her.

She had met Detective Sergeant Trent several times the previous winter, when he had always appeared badly affected by the cold weather, despite being swaddled in several layers of clothing. Now, during what was reputedly the hottest summer the Scottish Borders had experienced for more than fifty years, he appeared equally uncomfortable, his face ruddy and dripping with sweat.

‘Hello, Sergeant. This is a pleasant surprise. I would have thought you had more important matters to deal with than a suicide. At least, that’s what I was told it most likely is.’

Trent dabbed at his forehead with a handkerchief. ‘I learned long ago to keep an open mind when it comes to dead bodies.’

‘So why am I here? Is your usual doctor not available?’

‘The constable was supposed to fetch one of your colleagues. Because of this.’ Trent held up a small evidence bag.

Zoe squinted in the bright sunlight, struggling to make out what was inside the bag. ‘“This” being . . .?’

‘A note of your practice’s address and phone number. We found it in the dead boy’s pocket and thought he might be one of your patients.’

‘May I take a closer look?’

Trent handed the bag over and Zoe studied its contents. ‘I don’t recognise the writing, but that doesn’t mean anything. I’ve seen this logo before, though. It belongs to a brand of painkiller that’s only recently come out. This piece of paper has been torn from one of those promotional notepads drugs reps are always foisting on us.’

‘So it definitely came from your surgery?’

‘Not necessarily. Why would anyone at the health centre write down our contact details if the patient’s already there? We have a practice booklet for new patients. Maybe he went to register at another practice and was told to come to us because he lives near Westerlea.’

‘You don’t recognise him?’

‘I’ve definitely never seen him, but I’m not there all the time. I’d have to check with the others.’

‘I expected the constable to come back with Doctor Ryder. I’m sorry he dragged you out here.’

‘Paul was taking surgery and Walter’s not around at present because he’s had to go back to Wales to organise his mother’s funeral. I offered to come, so please don’t blame your constable.’

‘It’s good to see you again, Doctor. You’re looking well.’ Trent smiled. ‘I think your baby’s due about the same time as ours.’

Zoe obviously failed to keep the surprise from her face, because he added, ‘I know what you’re thinking and yes, I have left it a bit late.’

Trent nodded, smiling even more broadly. His obvious pleasure at the prospect of being a father caused Zoe a momentary pang of regret at not having anyone to share the joy of her own pregnancy with. She turned her attention back to the corpse and pointed at the bandaged hand. ‘This looks professional. Even if he’s not registered with us, he may have come into the health centre for treatment.’

‘We’ll need to find out for sure.’

‘I can check with our practice nurse when I get back to the health centre.’

‘What’s her name?’ Trent took from his pocket one of the small data recorders which had superseded policemen’s notebooks and pencils.

‘I’m being a little unfair. Colin job-shares with a female colleague but she’s on holiday at present. As I’m here, do you want me to examine this poor boy? I won’t remove his clothes and I can’t take his temperature, but things I notice now may at least help you know if he was dead or alive when he went in.’

Trent looked back towards the track Zoe had slithered down. ‘There’s still no sign of the duty doctor but I don’t think I can let you touch the body. Can you tell me anything just by looking at him?’

‘I’ll try.’ Zoe took a butterfly clip from her bag and used it to pin up her ponytail, then slowly lowered herself to her knees. ‘Apart from his clothes being damp, it’s hard to believe he’s been in the water at all. There are none of the usual signs of immersion, like swelling and wrinkling of the skin.’

‘Maceration, you mean?’ The policeman saw her look of surprise and winked. ‘I’ve seen a few floaters in my time, picked up the jargon.’

‘Of course. So there’s no maceration and the note you found in his pocket is still legible. He can’t have been in the water for long. What time was he pulled out?’

‘I’ve no idea. He was like this when we got here.’

‘How did you know where to find him?’

‘CrimeStoppers got a call at about seven o’clock this morning to report a body lying on the banks of the River Tweed near the Chain Bridge. The caller rang off without saying anything else. Most people try not to get involved with the police if they can help it, and we’ve no way of finding out who he is because calls coming in on the 0800 number can’t be traced.’

Zoe twisted her neck to get a better view of the boy’s unbandaged hand. ‘This palm has a nasty-looking injury. It’s probably safe to assume he has a similar one on the other hand. One of the bandages must have come off when he was being pulled out of the water.’

‘Any indication what caused it?’

‘It could be a burn but there’s too much swelling to know exactly how it happened. It’s badly infected, though. He would have been in a great deal of pain.’

‘So that didn’t happen today?’

‘With this amount of swelling? Unlikely.’

Trent wiped his face again. ‘Are you able to tell if he was dead or alive when he went into the water?’

‘Diagnosing drowning can be hard, Sergeant, even with the benefit of a post mortem.’ Zoe reached towards the boy’s face but stopped herself in time. ‘It’s difficult without touching him but I can’t see any white froth coming from his mouth or nostrils. That’s one of the signs to look for.’

Preludio a la fundación by Isaac Asimov
Stars Above: A Lunar Chronicles Collection (The Lunar Chronicles) by Marissa Meyer
Untrained Fascination by Viola Grace
Losing It by Sandy McKay
Dead Wood by Amore, Dani
The Underworld by Jessica Sorensen
Chelynne by Carr, Robyn
Gamers' Quest by George Ivanoff
Seduce Me by Robyn DeHart
The Coldstone Conflict by David Lee Stone
Our partner