Read Too Sweet to Die Online

Too Sweet to Die 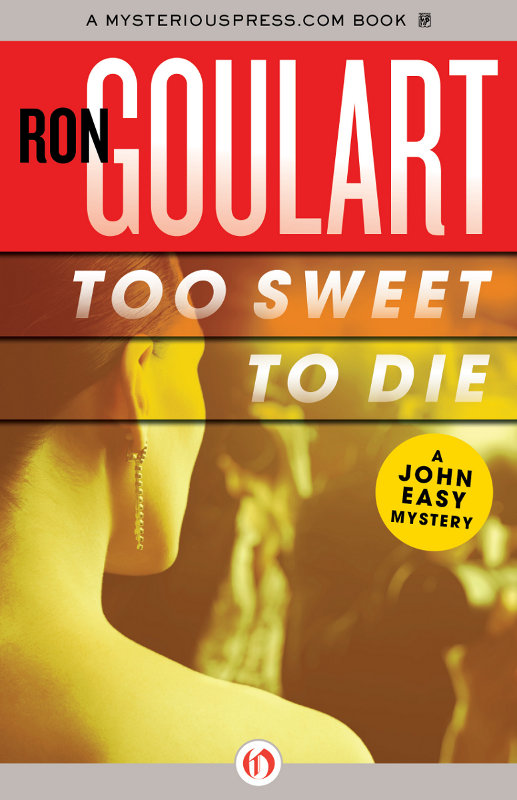 Too Sweet to Die
Ron Goulart

T
HE PRETTY BLACK GIRL
was sitting high in the tree. With her long bare legs swinging, she was sipping a mug of foamy root beer through a straw. She drew the tip of her straw away from her bright lips, leaned forward, smiling, and said, “It’s foam-idible.” Her right breast swung suddenly out of her leopard skin halter and hung free.

“Cut again, for Christ sake,” said the enormous stripe-coated man next to John Easy. “Keep your damn tits to yourself, Arden. This is a root beer spot not a skin flick, for Christ sake.”

Arden made a pouting face, tugged the spotted halter back up over her large round breast.

Marco Killespie took Easy’s arm, leading him away from the cameras and technicians. “Did Renoir have this problem when he made
Grand Illusion
? Did Welles, for Christ sake, have to cope with falling tits when he made
Citizen Kane
?”

“But how much root beer did they sell?” said Easy as he and the fat commercial producer stopped near a grove of real palm trees.

Killespie narrowed his little blue left eye, then chuckled. “Touché,” he said, poking Easy. “It’s no use getting pretentious over what is, after all, hack work.” He stepped away from Easy, rubbed his sweating palms on the backside of his tight white Levis. He cupped his hands, calling, “Everybody break for fifteen minutes. That’s fifteen, not thirty, for Christ sake. And, Arden, get Molly to sew your boobies in.”

Easy watched the fifteen people employed on Killespie’s commercial scatter across the bright morning studio lot. Easy was a tall wide-shouldered man, two years over thirty. His hair was a darkwood brown, his face had an outdoor, knocked-about look. “You’ve got a problem?” he asked Killespie.

The enormous producer undid his yellow silk ascot, then rubbed his perspiring face. Waving at the acre and a half of real jungle surrounding them, he said, “I’ve got a hundred and twelve problems, for Christ sake. You know how much this costs a day to rent? One hundred and seventy-five bucks. In Africa I could get it for a handful of glass beads, or I could have in the 1930s. On top of that the gorilla gets seventy-five dollars a day.”

“Seventy five dollars for some pissant Armenian in a hair suit, for Christ sake.” Killespie pressed his plump hands against his plump chest. “Wouldn’t you think in Hollywood, even as it declines and falls, there’d be more than two guys with gorilla suits. The other guy has an exclusive contract with NBC to do an educational show for kids. So I’m stuck with Norhadian the pissant.”

Nodding, Easy asked, “The reason you want to hire me has something to do with the gorilla man?”

“Indirectly,” said Killespie. “Fortunately he isn’t here today, so I’m saving seventy-five bucks.” He glanced up at a banana palm. “What the hell kind of birds are those sitting up there? Sparrows, for Christ sake. Some authentic 1930s jungle movie touch.” He bent, grunting, and picked up a rubber rock to throw at the dingy little brown birds. “Let me, explain my theory of television commercials to you, Easy.”

Easy halted him with a raised hand. “I’ll charge you twenty-five dollars an hour for talking to you, even if I don’t take your case.”

“That’s okay, I can pay for that with what I’m saving today on the gorilla,” said the enormous man. “Basically I believe you have to entertain people, Easy, even when you’re trying to sell them something. I’ve built up my reputation on that theory. A Killespie commercial will always be (A) Entertaining, (B) Amusing, and (C) Hard-selling. Take the segment you saw me trying to put on film just now. There you have entertainment, in the person of Arden. She’s really a very gifted performer and comedienne, when she can keep her boobies under control. Then we have humor, in the realization we’re seeing a subtle but hilarious parody of oh! so many 1920s jungle films. The sell comes across in two ways. Firstly we see this lovely Afro-American girl obviously enjoying the root beer. Plus which we admire the company for giving us another terrific and hilarious Marco Killespie commercial.” The sparrows he’d scattered with his flung rock returned now and Killespie paused to scowl up at them. “I’ve poured ninety thousand already into this particular one-minute spot, Easy. I have to have a complete rough cut of it in St. Louis with the client in three weeks. As of today I only have about two-thirds of my minute shot. Here’s what I want you for.”

Easy had been looking across the hazy jungle toward a silver trailer where Arden was sitting sewing at her leopard skin. “Yes?”

“My jungle princess has vanished.” Killespie walked across the loamy ground to a canvas-back chair and picked up a warped manila folder. “I inadvertently sat on this, but that shouldn’t matter.” He let the folder fall open and extracted two glossy photos and a sheaf of stapled-together mimeographed sheets. “Her name is Jill Jeffers.”

Taking the material, Easy looked through it. Jill Jeffers was a slim coltish blonde of twenty-five, freckled and faintly sad-looking even in her glossy smiling publicity photos. She was represented by an agent named Noam Glanzman and his biography and credit list of the girl ran to only three mimeographed pages. “What do you mean vanished?” Easy asked finally.

“I mean vanished as opposed to being here yesterday and today, for Christ sake, in this hilarious Marco Killespie spot,” said the enormous producer. “I need Jill for three, maybe four more days’ shooting. I can work around her for a while, but I can not finish my commercial without her.”

“What have you done so far to find her?”

“I’ve done nothing. I’ve been too busy, but my people have called her home, her friends, her agent and the Guild and AFTRA. Which is why I am in a position now to state flat out that Jill Jeffers has vanished.”

“You saw her last when?”

“Friday,” answered Killespie. “We were right here in Burbank for innumerable hours last Friday, running into golden time, for Christ sake. Norhadian the gorilla man kept dropping Jill and we kept doing retakes. You’d expect a man who’s been a gorilla in Hollywood for over thirty years would know how to carry a blonde through the jungle.”

“Did she say anything Friday, about not being here on Monday?”

“No, of course not. I’d have kicked her pretty keaster all around the lot if she had. When I’m in the middle of a hilarious Marco Killespie spot nothing is more important and no excuse is valid. Fire, earthquake, marriage, death, nothing.”

“She didn’t give you any idea where she was going after she left here?”

“Up the coast where?”

“Jill didn’t say. I’m involved, for Christ sake, in the over-all commercial, the gestalt of the thing. I don’t pay too much attention to what they say between takes,” said Killespie. “I think perhaps Jill mentioned she was going to take off and drive up to San Francisco or some such place.”

“Jill’s not seriously involved with anybody right now, at least so my people tell me.”

“I’d like to talk to your people. Find out who they’ve checked with and what they learned.”

“Nothing is what they learned,” Killespie assured him.

“Okay, check with Molly. She’s the red-haired girl standing by the trailer over there.” Killespie sighed, turning his head to survey the palms and vines all around him. “I’m very fond of this jungle. It’s very pleasantly 1930s. It’s almost worth the one hundred and seventy-five bucks.”

Easy said, “I get a hundred bucks a day and expenses.”

Blinking his little blue eyes, Killespie said, “Only twenty-five more than a gorilla man?” He reached into a tight back pocket of his white trousers and drew out a packet of cash. He peeled off three fresh hundred-dollar bills. “Work on it, Easy. Find Jill. I’m giving you three days’ pay now, but I’m hoping you bring her back to me a lot sooner than that. The fate of what is going to be the most entertaining and hilarious Marco Killespie commercial to date rests entirely with you.”

After they shook hands, Easy walked away across the hazy jungle to talk to Killespie’s secretary. Arden, annoyed, had abandoned the leopard top entirely and was leaning back against the silver side of the trailer drinking her root beer straight from the can.

Behind his metal desk, Easy sat with his fingertips resting on the spread-out photos of the vanished Jill Jeffers. “You think maybe I’m getting typed?”

Nan Alonzo was bent toward the air conditioner in Easy’s private office. Squinting, she twisted a silver knob a fraction to the right. “You do seem to get frequently hired to track down missing women. Is this another wayward daughter?”

“No, a missing jungle princess.”

Nan turned round once in front of the window-mounted air conditioner. “Have I got it too chilly in here for you?”

“No, once we get the sides of beef hung up it’ll be fine.”

“I’ll turn it down,” said the wide blonde Nan. “A real jungle princess?”

“A Marco Killespie root beer commercial jungle princess,” explained Easy. He held out one of the glossy pictures of Jill Jeffers. “She disappeared in the middle of a one hundred thousand dollar television spot.”

Nan took the picture. “Another tall skinny one,” she said. “Want me to check the usual places?”

“Morgues, hospitals, et cetera.” Easy tore the top sheet off a pad with
Easy & Associates
,
Detective Services
imprinted in the upper left-hand corner. Writing the name Noam Glanzman and a phone number, Easy said, “First call her agent and get me an appointment with him this afternoon.”

“When did the girl disappear?”

“She was working with Killespie until nine last Friday night, at the Wheelan Studios over in the valley. Nobody admits seeing her since.”

“Who does nobody consist of so far?” Nan folded the memo and slid it into a slash pocket in her skirt.

“Killespie had his secretary call her agent, the Screen Actors Guild and a few of her local friends,” said Easy. “I’ll check back with the friends today. Jill Jeffers’s has a little cottage she rents up on Scenario Lane in Beverly Glen. She’s not there.”

“On my way back from talking with Killespie this morning.”

“A second-story man can’t earn a living in LA, too many ranch-style houses,” replied Easy. “No signs of violence at Jill’s cottage, nothing to indicate where she might have gone. I did find some letters from a friend of hers up in San Francisco. I’ve got the name and address down.”

Clang by E. Davies
Thunder (Alpha Love - a Paranormal Werewolf Shifter Romance Book 3) by Olivia Stephens
Rough Rhythm: A Made in Jersey Novella (1001 Dark Nights) by Tessa Bailey
People of the Nightland (North America's Forgotten Past) by Gear, W. Michael, Gear, Kathleen O'Neal
The Solstice Mistletoe Effect by Serena Yates
Clockers by Richard Price
A Mother's Love by Ruth Wind
A Time to Keep by Rochelle Alers
GI Brides: The Wartime Girls Who Crossed the Atlantic for Love by Barrett, Duncan; Calvi, Nuala
The Frighteners by Michael Jahn
Our partner