Read Toward the Sunrise Online 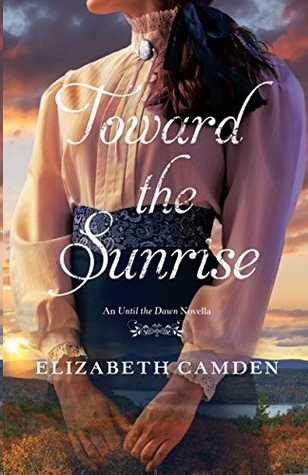 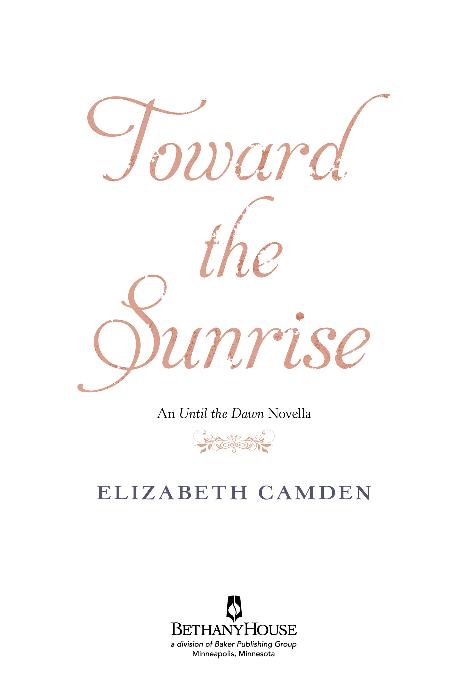 Preview of
Until the Dawn

Sometimes ten seconds is all it takes to change
the course of a life.

Julia Broeder had learned that lesson the hard way last week when an impulsive decision triggered a string of events that now had her waiting on this hard bench outside the conference room at the Women’s Medical College of Pennsylvania. Behind the closed conference-room door sat the twelve people who were deciding her fate. She would either be allowed to continue her education and graduate in the spring as a fully licensed physician, or she would be expelled and sent home in disgrace.

Dean Edith Kreutzer was a celebrated trailblazer in the crusade to get women admitted to the medical profession, but this morning she had looked as cold as an ice queen as she convened the college’s Board of Trustees to determine Julia’s fate.

Julia curled her fingers around the rim of the hard bench, the only furniture in the small foyer outside the conference room. Every impulse urged her to stand and press her ear to the paneled door to hear the board’s discussion, but she forced herself to sit still. There was nothing she could do to influence the board’s decision.

It didn’t matter how badly she wanted to become a doctor. Or that she ranked at the top of her class in academics and was eager to go out and be a physician in some of the poorest areas of the world. All that mattered was what she did last weekend.

It was Saturday morning when all the trouble began. Like all Saturdays, she was working at the college’s pharmaceutical laboratory alongside six other ladies enrolled in medical school. As part of her coursework in pharmacology, she was making cinchonine pills by grinding the powder to the right consistency and pouring the medication into the tiny aluminum molds. At first she paid no attention to the intermittent bits of noise coming from outside the window, but finally a spray of pebbles hit the window glass and got her attention.

From the second-story window, she recognized the two young men standing in the slushy yard below. They worked for the Philadelphia
Fire Department, and she knew them from Fairmount Park, where she and her classmates sometimes escaped to play tennis in balmy weather or go skating in the winter. Ross McKinney had a fine toboggan he often loaned her to go barreling down the slope when it snowed. The fireman and his friend seemed like decent young men, and she loved careening down the hillside on their toboggan.

She tugged up the window sash, chilly air flooding the room as she leaned outside. “If you hurl any more rocks at this window, I’ll suspect you of being one of those tedious revolutionaries who rattle sabers and threaten to storm the ramparts.”

Neither man laughed. One of them cradled a dog in his arms. Even from the second story, Julia could tell the dog was horribly mangled.

“I’ll be right down,” she said, slamming the window sash so hard the glass rattled.

The dog was a Boston terrier. One of her ears was partially torn off; her face was full of puncture wounds. Julia wanted to wince and look away, but doctors didn’t have that luxury and neither did she.

“Have you got any drugs that might fix her up, Miss Broeder?” Ross asked.

It would take more than drugs to fix this dog. That ear was going to need to be anchored back on with a row of stitches, and even then she wasn’t sure it could be saved. It was a Saturday, so the operating room at Olsen Hall should be available. The room was locked, but locked doors had never stopped Julia in the past. If one avenue was closed to her, she would go over, under, or around the obstacle until she reached her goal. In this case, it was by standing on the shoulders of one of the firemen to slip through the unlocked window of the operating room and then traveling through the darkened hallways to let the men, dog, and two of her classmates in through the front door of the building.

None of them had treated a dog before, but surely the principles of suturing a wound, cleaning to prevent infection, and stitching mangled flesh together were the same. Ross’s friend had to dash off to his shift at the fire station, but Ross stayed and stroked the dog’s flank, murmuring soothing words while Julia held a mask over the dog’s snout, gently squeezing the rubber ball that fed a stream of anesthesia to the terrier.

Treating the dog’s wounds took almost an hour, but she was satisfied with her work by the end. The dog would make a fine recovery.

After replacing the vials of anesthesia, antiseptic, and the suturing kit, she asked her classmates to sign her out of the pharmacy rotation for the day and accompanied Ross to the trolley stop, the slumbering dog heavy in her arms. The dog weighed at least twenty pounds, most of it pure muscle, but Julia refused to let Ross take it from her arms.

There was a bench at the trolley stop, but she was too nervous to sit. The clock on the bank tower across the street indicated she had nine minutes until the next trolley heading to the fire station would arrive. It was a good thing her classmates had not followed her to the trolley stop, for she was more likely to get the truth if Ross didn’t have to own up to it in front of an audience.

“Where did you get this dog?” she asked. It hadn’t escaped her notice that aside from the wounds she’d treated today, there were plenty of healed scars on the dog’s chest, legs, and snout.

“And does he fight this dog regularly?”

Ross’s mouth tightened. “She’s a good dog. Fighting is natural for her, and she doesn’t usually get dinged up this bad.”

Julia rocked the slumbering dog in her arms, cradling it almost like a baby. What did she know about Ross McKinney other than he was fun company at the park and that he was generous with his toboggan?

The odds were strong that if she released the animal back into his custody, this mangled, victimized dog would be forced into the fighting ring again. Ross’s trolley wasn’t due to arrive for another eight minutes, but the Red Line trolley had just rounded the bend on its electric rails and was heading straight toward them.

If she boarded the oncoming trolley, she could get the dog to safety. It had been a big risk to break into the clinic, but the deed was done, and it seemed atrocious to turn the dog back over to the brutes who had done this to her in the first place. Julia bit her lip, indecision giving her the start of a pounding headache.

The Red Line trolley would be here in ten seconds.

She had already done her duty by treating an injured animal. And Ross wasn’t an altogether bad man. Clearly he cared for the dog or he wouldn’t have looked so stricken when he flung those pebbles at her window.

Ross must have noticed her watching the trolley’s imminent arrival. “Here, I’ll take her now if you want to head back to the college.”

The trolley slowed, and the driver pulled a lever to open the doors. This was it.

She kept her eyes on the driver as she boarded the trolley.

The slumbering animal made it awkward to fumble for the lever controlling the door, but Julia managed to yank it shut before Ross could board.

“This dog has been badly mistreated,” she said to the driver. “Please hurry. That man has no business owning a dog.”

The driver hesitated only a split second before nodding in agreement and setting off down the street.

Dean Kreutzer discovered her transgression the following day when Ross and three friends from the fire station arrived at the college to ask for their dog back. They denied using the dog for fighting, but when Julia refused to turn over the injured animal, Ross threatened to get his friends from the police department involved.

Dean Kreutzer insisted Julia produce the dog. “You have already broken the rules by conducting an operation without supervision,” the dean said tightly, going white around her lips. She ordered Julia from the office to go fetch the terrier.

Instead, Julia absconded with the dog to the train station, and an hour later she was heading toward the convent of the Sisters of Mercy outside of Philadelphia. The convent was located amid rolling hills and dairy farmland, a world away from the tough streets of Philadelphia. The dog rested on her lap the entire journey, staring transfixed at the countryside beyond the window. Had this dog ever seen countryside like this before? It might have been Julia’s imagination, but it seemed the dog breathed easier as they moved deeper into the rural farmlands.