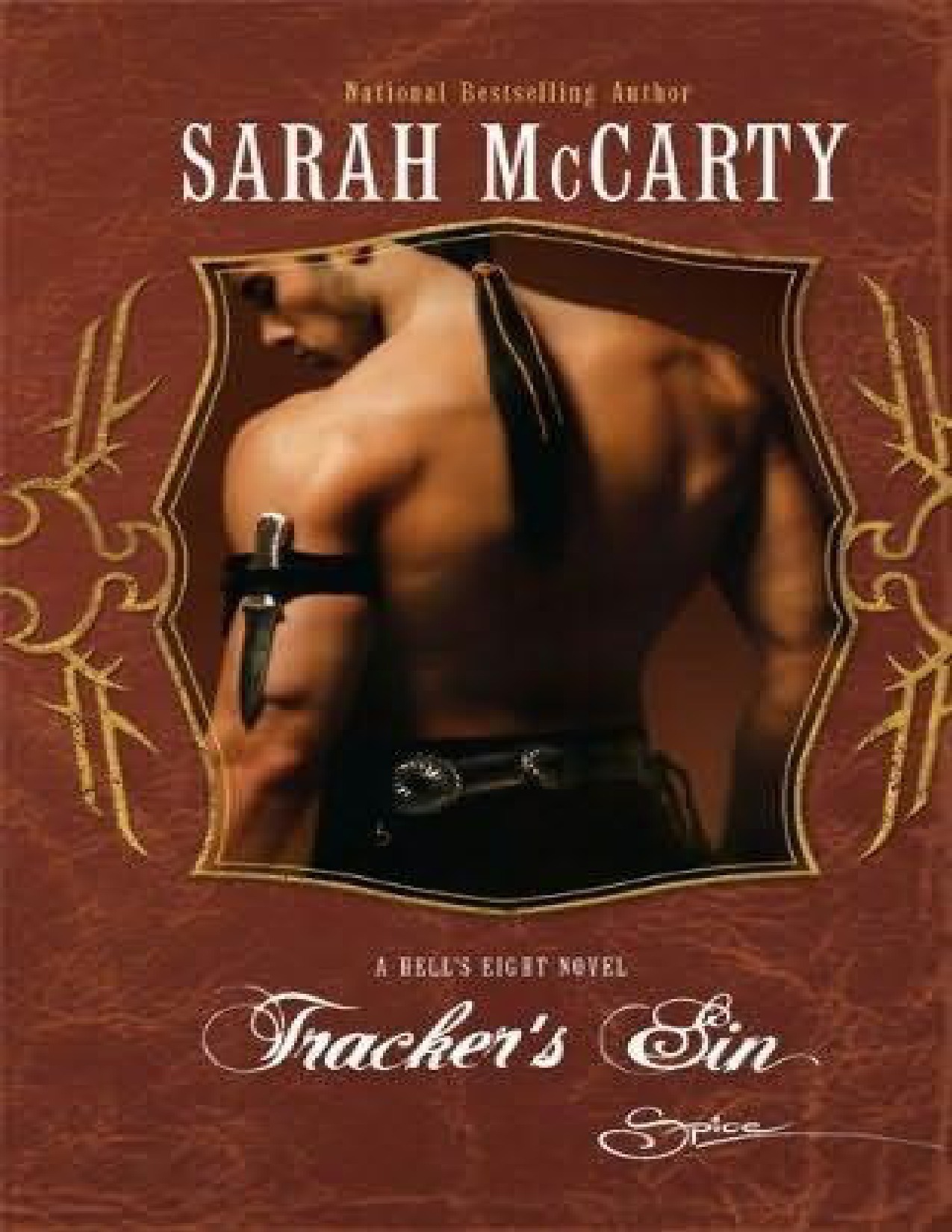 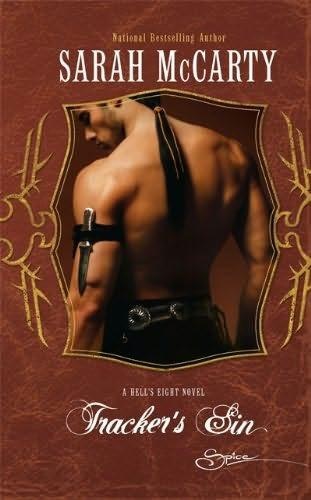 “Sarah McCarty’s new series is an exciting blend of raw masculinity, spunky, feisty heroines and the wild living in the old west…Ms. McCarty gave us

smal peeks into each member of the Hel ’s Eight and I’m looking forward to reading the other men’s stories.”

“Intense, edgy and passionate, this is old-school historical romance at its finest.”

“McCarty continues her Hel ’s Eight series with this solidly plotted tale. There’s wonderful chemistry between Sam and Bel a, and the witty banter between

them makes the story come alive.”

“What real y sets McCarty’s stories apart from simple erotica is the complexity of her characters and conflicts. The third instal ment of her Hel ’s Eight

“If you like your historicals packed with emotion, excitement and heat, you can never go wrong with a book by Sarah McCarty.”

To Vann—the man who makes me laugh no matter how dark the day. May your life be fil ed with love, sunshine and laughter for al the rest of your days.

I don’t know how to start this letter, except to say thank God you’re alive.

So much has happened in the last year. Not al of it good, but some of it so special, there aren’t words to describe it.

I’m married. Happily so, to a man of whom Papa would never have approved. He doesn’t have money, doesn’t have social position,

and doesn’t care a fig about mine, but he is everything I never dreamed big enough to desire when we used to sit under the apple

tree imagining the perfect husband. A heart that knows no limits, a sense of honor that can’t be compromised, and a love for me so

rich, I’l never be poor. He’s Hel ’s Eight, and if you’re stil living in the Texas territory when this letter finds you, you know what that

means. If not, you’re in for a treat. The men of Hel ’s Eight are a breed apart. A standard on which to build legends, for al they’l scoff

at you if you tel them so.

My husband’s name is Caine Al en, and he’s the one insisting I write this letter. He believes in family and in my

intuition, and though everyone says you’re dead, he says my gut feeling is good enough for him, and he’s promised finding you wil be

Hel ’s Eight’s number one priority. He can be high-handed at times, but in the best ways.

I’m sorry I can’t introduce you to the man handing you this letter, but you see, I’ve made seven copies and entrusted

asking you to put yourself in their care because each one of them has made a promise to me, one they’ve sworn to uphold.

They’ve promised to bring you home, Ari. Home to Hel ’s Eight, where there’s no past, no recriminations, no

judgment, just peace and a place where you can breathe easily. After what we’ve been through, I know it sounds like a preacher’s

description of heaven, il usive and unreal. But I promise you there is a way out of hel and if you haven’t already found it, I’l help you.

Trust no one but them, Ari, because Father’s solicitor, Harold Amboy, is the one who arranged for us to be ambushed

initial y, and he has men hunting for you, too. He intends to control Father’s money through one of us. But you can trust any of these

men. Absolutely and completely, with everything you hold dear.

I’m crying as I write this. I can’t imagine what you’ve been through. I can’t forget how we parted. My nightmares, which

must have been your reality. The sense of helplessness as I stare at the night sky, wondering if you can see the same stars,

wondering if you’re healthy, happy, and most of al safe.

Do you remember the game we used to play as children when things didn’t go our way? How we’d find a patch of

daisies dappled in sunlight, link our hands in our special way and then just spin until we didn’t care about anything else? I so want to

see you again, Ari, find a patch of daisies, grab hands and spin until laughter takes over and al the bad fal s away. Though it’s

irrational, because I have no idea how long it wil take the men to find you—days, months, years—I have to say this.

Tracker nodded in response to his twin brother’s question, then yanked the square knot tight on the rawhide, securing his bedrol to the

back of the saddle. Desi’s letter to Ari rustled in his pocket, a subtle prod.

Tin rattled against tin as Shadow stuffed his plate and cup into his saddlebags. “We’ve got a better lead,” he said, pointing out the

obvious for the second time since they’d set up camp the night before. “The Saransens down Cavato way actual y have a blond woman confirmed, living

Tracker looked at Shadow. It was like gazing in the mirror. His twin had the same height, same broad shoulders, the same sharp planes

to his face that lent a cruel edge to his expression. The latter came from their father. The only softness in his face was that ful mouth, a gift from their

Mexican mother. The same deep brown eyes with the cynical edge that came from knowing everything had a price.

them to rob. A pity they’d never been able to hide from him. Tracker jerked the knot again, remembering the spew of bile that had rained down in insults

and beatings if their father’s standards weren’t met.

As the older brother by twenty minutes, he’d tried his whole life to protect Shadow from the harshness of their world. He hadn’t been

just boys. He’d suffered in the days after the massacre as he and the seven other orphaned boys had almost starved to death, searching for a place to

belong. In the end, they’d made their home together, found acceptance in each other. And in the years since, those eight boys had grown into the most

feared men of the Texas plains. Tracker and Shadow had family in Hel ’s Eight, but any respect they garnered outside the confines of Hel ’s Eight land

they’d earned with their blood. In this country, the only respect a man held was that which he took. And he and Shadow had taken more than their fair

Tracker shook off the melancholy and smiled as he slid his rifle into the scabbard. “I was thinking that Caine would be pleased with where

Caine was the leader of the group that those eight starving boys had become. He’d taken them from outlaws to lawmen, and Caine’s wife

was the reason Tracker was on the hunt now.

“He always said we’d get strong first and then we’d get even, and damned if he didn’t make that come true.”

“Hard to believe we’re now the ones people cal on when they have trouble.” Tracker stil wasn’t comfortable with that. He’d rather stay in

the background with no ties, no expectations, handling what needed to be handled calmly and efficiently, without any notoriety.

Shadow chuckled and shook his head. “Yeah, especial y since we were so good at being trouble.”

They had been that. Tracker had never felt so free as in those early years when they’d ridden outside the law, taking justice into their own

hands, slipping in and out of the shadows, doing what needed to be done with an efficiency that would have pleased his father. But things had a way of

changing, and now Hel ’s Eight was the law, bound somewhat by the rules of society. He grimaced. Hel , they’d gotten so damn respectable that it chafed.

The bounty they’d just settled being a case in point.

He pictured again the smarmy smirk of John Kettle as he stood before the judge, hearing his not guilty verdict. The man was as guilty as

sin. Tracker and Shadow had buried the bodies of the woman and child he’d kil ed, before they’d tracked him down. In the old days they would have just

kil ed the son of a bitch in a quick dispensation of justice. Instead, they’d fol owed the law and brought him to the county seat. But while the woman and

little girl were stil dead, their kil er was walking free, because justice had caved beneath the money and influence of John Kettle’s family.

Earthway by Thurlo, Aimée
Dreams of the Golden Age by Vaughn, Carrie
Quincannon by Bill Pronzini
Beauty And The Bookworm by Nick Pageant
In the Blood by Sara Hantz
The Tides by Melanie Tem
His Old-Fashioned Love (Old-Fashioned Series) by Roberts, Laylah
The Bug House by Jim Ford
Mrs. Pargeter's Plot by Simon Brett
Suited to be a Cowboy by Nelson, Lorraine
Our partner