Read Tragedy in the Commons Online

Tragedy in the Commons 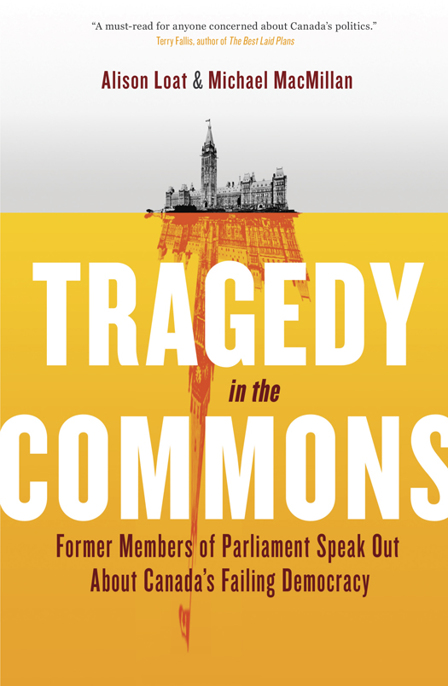 Copyright © 2014 Alison Loat and Michael MacMillan
All rights reserved under International and Pan-American Copyright Conventions. No part of this book may be reproduced in any form or by any electronic or mechanical means, including information storage and retrieval systems, without permission in writing from the publisher, except by a reviewer, who may quote brief passages in a review. Published in 2014 by Random House Canada, a division of Random House of Canada Limited, Toronto. Distributed in Canada by Random House of Canada Limited.
www.randomhouse.ca

Loat, Alison, author
Tragedy in the Commons : what our Members of Parliament tell us about our democracy / Alison Loat and Michael MacMillan.

To our parents,
Mary and Iain MacMillan,
and Trish and Chris Loat

CHAPTER ONE
The Best Intentions

CHAPTER TWO
Out of the Frying Pan …

CHAPTER THREE
… Into the Fire

CHAPTER FOUR
What Job Is This Anyway?

CHAPTER FIVE
Kindergarten on the Rideau

CHAPTER SIX
Where the Real Work Gets Done
(Sometimes)

CHAPTER SEVEN
Living in the Franchise

CHAPTER EIGHT
Colluding in Their Servitude

CONCLUSION
Toward a Better Politics

“Let’s start at the beginning. Can you talk a bit about how you got interested in public life?”

“I was a fairly normal kid, and playing football or hockey was a lot more important to me. I mean, I had walked in the civil rights marches, I was very interested in the Third World. I was very interested in the environment, which at that time was just beginning to be an issue.… But I really never had an interest in going into politics. I was going to the Third World. That was my ultimate aim, to go to the Third World, but I wanted to make money before I went.… And I suddenly, really very late in life, decided that I was going to run in public life. [A friend who was active in politics] came to see me to try to convince me to run.… And I said, ‘I’ve got to think about it.’ And he said to me, ‘Don’t think about it. If you do that, you will never run.’ And you know, I said, ‘That’s probably good advice.’ And I didn’t think about it, and I ran.”

I
n 2009 we founded Samara, a think tank dedicated to raising the level of political participation in Canada. We named it after the term used to describe the winged
“helicopter” seed that falls from maple trees. As a symbol, it says to us that out of small ideas, big things can grow. Soon afterward, together with members of the Samara staff, we began travelling across the country to interview former Members of Parliament. We spent two or three hours with each MP, often in the comfort of their own homes and communities, and between that first year and 2013, we interviewed eighty men and women from all parts of the country. Some had left politics voluntarily, after short or long careers, while others were voted out of office. Taken together, they represented all five parties who sat in the 38th, 39th and 40th Parliaments (2004–11). We believe this to be the first large-scale, systematic series of exit interviews with former Members of Parliament in Canada or, for that matter, anywhere in the world.

When we embarked on this project, we hoped ten or fifteen former MPs might agree to speak with us. We were wrong. Nearly everyone we approached offered to meet and share their slice of history and advice. They gave generously of their time and ideas, often opening their homes to complete strangers, and we are grateful to them for the opportunity to hear their reflections on their service.

Why did we do it? We were searching for an answer to a complicated problem.

Canada is among the world’s most successful democracies. Look at any international ranking of democracy, and we appear, almost without fail, near the top.
The Economist
Intelligence Unit’s Democracy Index ranks the world’s sovereign states by how democratic they are, and Canada has placed in the top ten since the index was first published in 2006. In 2012 we placed eighth, well ahead of the United States and the United
Kingdom. On Transparency International’s 2012 Corruption Perceptions Index, we tied with the Netherlands as the ninth-least corrupt nation in the world. And in Freedom House’s survey, Canada is deemed “free.” Period. Top of the pile.

Yet these rankings are increasingly difficult to square with the growing sense among Canadians that the country’s politics are not working quite as they should. For well over a generation, in election after election, voter turnout has declined, and millions of dollars in government and political party advertising have done little to arrest the decline. Political party membership is rare to non-existent in most parts of the country, and many who do join become disillusioned and cynical. Talk to campaign volunteers or candidates, and they’ll tell you how hard it is to get citizens involved. Many people don’t even answer the door, and if they do, they rarely want to talk policy and ideas.

Some may argue that this reluctance is in fact a sign of satisfaction with the status quo, but research does not bear that out. Canadians are becoming less happy with the way we are governed. For example, public opinion research commissioned by Samara in 2012 revealed that only 55 percent of Canadians were satisfied with the state of their democracy. Ten years earlier, when Canadians were asked the same question, the result was twenty points higher. Canadians face a great number of challenges today—environmental sustainability, economic prosperity, increasing rates of poverty, effective health care delivery, to name but a few. Most money that Canadians spend in these areas comes as a direct result of decisions made by our governments and politicians. Making the right decisions is critical to ensuring a continued
high quality of life for all of us, whether we were born here or moved here from somewhere else.

In other countries, citizens risk their lives to have a voice in government and the ability to influence the decisions made in their own legislatures. They are motivated by a belief that democratic processes are better able than aristocracies, dictatorships or other governmental models to respond to the challenges facing their citizens. In Canada, we may have come to take our right to a functioning democracy for granted. Voting trends are but one indicator among many: Canadians are checking out of their democracy in droves.

So who is best positioned to help solve this problem? Who understands the system well enough to be able to identify what’s driving that wedge between Canadians and their system of government, and where solutions might be found? And, when push comes to shove, who is most responsible for and often takes much of the blame for our lamentable state of affairs?

We thought interviews with MPs would illuminate how Canada’s democracy works, right at its front line. Conventional wisdom holds that the best ideas for improving an organization reside in the minds and experiences of those closest to it. What could be done to improve patient care in our hospitals? Talk to the doctors and nurses. Want to eliminate waste on the factory floor? Ask the line workers where changes could be made.

Current parliamentarians live and work in the thick of that action. But they are also busy and often governed by a partisan agenda. So in our search for answers, we thought
former
MPs—those who were out of the public eye
and had gained perspective on their time in office—might have some answers.

WITH EVERY FEDERAL ELECTION
in this country, more than 1,600 people are nominated as candidates to become one of the 308 who serve as Members of Parliament in Canada’s House of Commons. (The number of our federal legislators is poised to rise to 338 in 2015.) These men and women vie to become a part of history, to be among the few citizens chosen by their communities to act as representatives to the rest of their country—to make important decisions on behalf of Canada, allocate billions of dollars, represent the country internationally and determine which problems the country will work to solve.

In these exit interviews, we asked the former parliamentarians to describe what brought them to public life. We inquired into their motives and their paths to politics. We asked how they spent their time in office. How did they interact with their constituents and civil society organizations? What did they view as their accomplishments in office? How did they work within their party? And what advice did they have for future MPs—and for Canadians themselves?

During the interviews, the former MPs were at times cagey, protective of themselves, their parties and their place in Canada’s public life. But for the most part, they were open, helpful and forthcoming about their experiences and the problems they identified in the way our politics works. Many said the questions we asked were questions they’d never been asked before, or at least hadn’t fully considered. Like us, they wanted to better understand and find solutions to Canadians’
growing disengagement with and lack of trust in our elected leaders, because it is a disenchantment that many of the former parliamentarians also share. Our interviews together present a composite insider’s portrait of the “Green Chamber” with implications that should both trouble and, we hope, motivate, all of us.