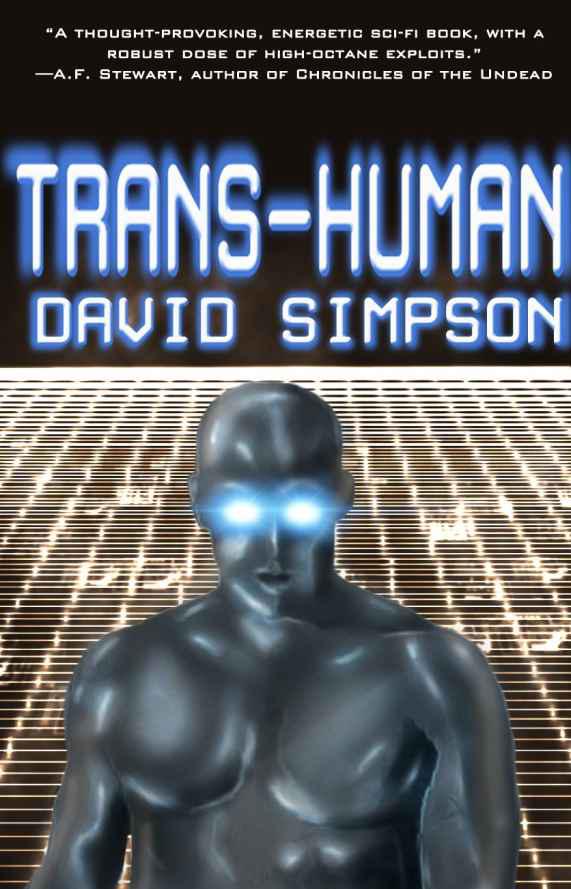 A message for you from the author:

Hi! Thank you so much for reading my book! I hope you enjoy it. It is always an honor when someone takes the time to read one of my novels and I feel humbled and thankful. I owe you one! If you do enjoy the book, please remember to tell a friend or two (or two thousand) about it. Best of all is a positive review on Amazon.com. At this stage in my writing career, word of mouth is better than gold and is the best way for me to reach a large audience and achieve my dream of writing full time one day soon.

I want to be available and interactive with my readers, so you can actually
friend me on Facebook
, “like” the
Facebook page
for
Post-Human
, read my blog (which I update regularly),
follow me on Twitter
, or check out my
website
. I’m also on
goodreads.com
and love to hear from readers and correspond with them about their experiences with my books. I try to thank a few readers on my blog every week, too, so maybe one of my thank yous in the future will go out to you!

So, thanks again, and hopefully, this will be the beginning of a long, rewarding, and beautiful relationship between reader and author.

Thank you to all of my readers for your kind support, reviews, and for telling your friends about my writing.

I want to thank Paul Hurley and Wilhelm Emilsson for their valuable insight.

And, more than anyone, I want to thank my wife, Jennifer. I simply couldn’t succeed without her tireless help and support. She’s the best wife in the universe and all other universes too.

It has been nineteen months since the A.I. turned against humanity and was, subsequently, destroyed. In the meantime, James Keats has turned over the A.I.’s powers to a non-intelligent, easily controlled operating system. He and Thel have left the planet and have spent six months vacationing on Venus, which has been newly terraformed without the consent or knowledge of the Governing Council.

The most important thing is this: To be able at any moment

to sacrifice what we are for what we could become.

WAKING UP had rarely been such a pleasure. Thel opened her eyes to the brilliant Venusian sunshine and smiled. She stepped out of her bed and her toes were greeted by the warm floorboards that had been heated all morning in the sun; the balcony was open and the white drapes were blowing gently in the morning breeze. The sun lit the emerald mountains and the lake twinkled calmly. Thel rested her naked body against the warm palm tree that grew at a sixty degree angle and cut through the balcony floor. Her skin had browned so much in the sun over the last six months that they were nearly the same tone, giving them the illusion of being melded together.

She was going to miss the perfection of Venus.

Her mind’s eye flashed in her eyes and she answered when she saw it was James calling. “Hello, Superman.”

“Hi there, Supergirl,” James replied. “I got the band back together!”

“Almost,” James conceded. “Djanet is busy at the Council’s headquarters but Rich and Old-timer are here with me,” he happily informed her.

“I’m not going to like having to put clothes on,” Thel said, donning a playful frown.

“Stop right there,” Thel cut him off. “I’ll throw something on. I’m just going to miss the freedom of this place now that we’re letting the cat out of the bag.”

“I know what you mean,” James replied as he skimmed across the surface of the Venusian ocean, flanked by Old-timer and Rich. “Listen, we’re going to be there soon, but first I want to swing by the falls to show the guys, okay?”

“
Show off
to the guys, you mean,” Thel teased. “Okay, flyboy, see you soon,” she said before signing off.

James smiled. She was right—he did feel as though he were showing off his new toy. He wasn’t sure if it was the right thing to reveal to the world that he had terraformed Venus—he even worried that he might be revealing its existence just so that he could get the chance to revel in his creation for an audience. He would never really be sure of his own motivations. All he knew was that he was happy to be with his friends and to be showing them the new crown jewel of the solar system.

He patched back into communication with Rich and Old-timer. “Thel’s really happy to see you guys again.”

“It’ll be nice to see her too,” Old-timer replied. “I have to admit that I can’t blame you for keeping this place to yourself for the last six months. It’s spectacular.”

“You haven’t seen anything yet,” James grinned. “Follow me!”

James blasted forth into supersonic flight. Old-timer and Rich smiled at each other after their initial astonishment and then followed suit. It had been a long time since they had seen their former Commander and friend and an even longer time since they had seen him with such child-like enthusiasm. There had been a time, long before the events that had caused James to have to destroy the A.I., when James was always filled to the brim with youthful optimism. The slow collapse of his marriage and the pressure he had been under to terraform Venus had withered that away to nothing and it seemed as though it might be gone forever. Rich and Old-timer were happy to see it back.

“Holy,” Rich whispered as James’s destination became apparent on the horizon. “What the hell is that?”

“It’s... my God... it is the most phenomenal thing I have ever seen,” Old-timer replied.

A massive wall of white vapor stretched out from one side of the horizon to the other and stretched into the blue sky, gleaming, a thousand times the size of the largest mountain on Earth.

“James... what are we looking at?” Old-timer asked.

James’s smile beamed as his companions caught up to him and they collectively slowed their approach. “This is my masterpiece,” he replied. “You have to see it up close. Come on,” he said excitedly as he guided his companions down so that they were skimming just above the ocean’s waves. The trio flew towards the wall of white and then, just as they were about to enter, James pulled up. “Okay, hold up.”

Rich and Old-timer stopped as well and floated just above the ocean’s surface. “What’s going on?” Rich asked.

“You’re going to love this,” James replied. “Deactivate your cocoons and shut down your mind’s eyes. I want you to fully experience this.”

All three men deactivated their magnetic fields and were suddenly overwhelmed by the roar. Rich put his hands up to his ears while James laughed.

“I’ve never heard anything like it!” Old-timer yelled above the roar. “Is that what I think it is?”

“It’s the biggest waterfall in the known universe!” James yelled back, smiling. “It’s a canyon ten times as long and as deep as the Grand Canyon with an ocean spilling over the side! I want to take you over the edge nice and slow... get ready for the experience of a lifetime!”

He turned and started skimming the waves once again; Rich and Old-timer followed closely behind. Old-timer’s stomach jumped as they entered the massive wall of mist that was being generated by the falls and the edge of the falls emerged like a dream. Rich started to look queasy and he unconsciously reached out and grabbed onto James’s jacket sleeve; he held on as tight as he could as the trio reached the edge and flew down into the white abyss.

“Holy crap!” Rich yelled out as he held onto James’ arm for dear life and began to laugh hysterically. “This is amazing!”

James let the mist fill his lungs and clear his mind as he coasted through the beautiful whiteness until the falls disappeared from sight. The trio flew through the whiteness until they emerged on the opposite side, turning to face the wall of mist and the falls that still roared. Below them, the water gleamed in the bright sunshine and swirled angrily.

“I’ve never seen anything like it,” Old-timer nodded, impressed.

“It’s... I know I should have an impressive adjective here but all I can think is... wow,” Rich added.

James smiled. “There are twelve more just like it on the planet. The mist helps reflect the sun’s rays and to keep the air currents flowing properly to cool the planet. The falls themselves generate enormous amounts of energy, which supercharges the planet’s ionosphere.”

“How is charging the ionosphere productive?” Old-timer asked.

“It’s not just productive—it’s crucial,” James replied. “When I had access to all of the information in the A.I.’s mainframe, I searched for information that would be useful for terraforming. I came across an amazing discovery. A scientist who lived in the late 19th and early 20th centuries, Nikola Tesla, had discovered a way to transmit power wirelessly.”

Old-timer knitted his brow quizzically. “I’m not sure I follow you.”

“No, you do. It’s just like I said,” James replied. “As amazing as it sounds, before the 20th century had even begun, a scientist had learned how to transmit electricity without wires. The technology had been hidden from the world after his death because certain governments wanted to maintain their power by forcing the use of fossil fuels—limiting those who could access it and keeping most of the world poor for economic reasons. Eventually the technology was just completely forgotten about—but a record of it was still in the A.I.’s database.”

“So... are you saying that Venus is... electrified?” Rich asked.

James smiled and nodded. “Yes! Isn’t it incredible? Venus takes in much more solar energy than the Earth does and with the additions of these falls all over the planet’s oceans, the ionosphere is supercharged and has far more energy than its future inhabitants could ever need. You’ll never need a nuclear implant on Venus.”

James laughed, “I never would have been able to do this without the information I had access to when I was operating the A.I. mainframe.”

Butcher by Rex Miller
Murder Is Secondary by Diane Weiner
Maybe This Time by Jennifer Crusie
Consequences of Deception by Fox, Ella
Deceived by Bertrice Small
Dora Bruder by Patrick Modiano
Calling Love: A Contemporary Christian Romance (Modern Conveniences Book 2) by Leah Atwood
On Being Blue: A Philosophical Inquiry by William H. Gass
City of the Falling Sky by Joseph Evans
Her Soldier Protector by Soraya Lane
Our partner