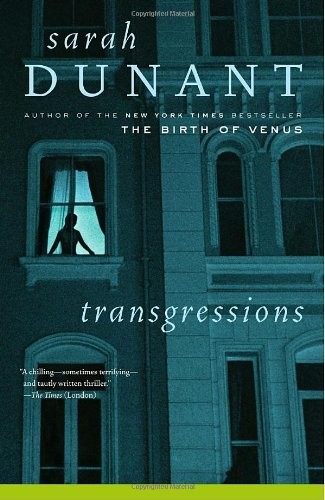 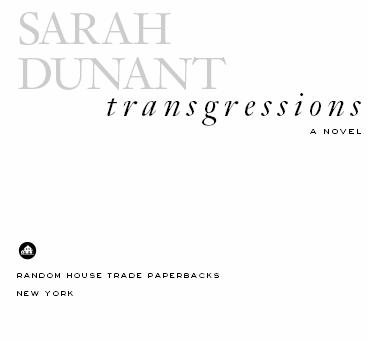 Other Books by Sarah Dunant

I
t first started four months after she had separated from Tom, although at the time, of course, she didn’t think of it as “It.” At the time, it was simply the morning when she walked into the kitchen and couldn’t find the Van Morrison CD. She hadn’t given it much thought then, just flicked her way through the rack and chose something else.

But over the coming weeks she had missed the album. Called
Enlightenment,
it was recorded at the turn of the nineties (years that seemed to have passed her by musically) and had a great opening track that roared out of the speakers, high and sassy, suggesting that there might indeed be life after the end of a failed relationship. In those scorching, high-summer days when there was so much sun that even the plants were calling for mercy, it had become a kind of anthem for her, offering a vision of a future that she couldn’t quite let herself believe in.

It had been her custom to play it first thing in the morning, as she opened up the French windows onto the garden and laid breakfast for herself on the slowly yellowing lawn. The day after Tom had moved out, taking his half of the kitchen with him, she had gone to the local department store and bought a whole set of absurd, brightly colored plates and breakfast cups and a shiny black cappuccino maker, stylish, very Italian. It had taken her a while to fathom the instructions—she was one of those independent women who nevertheless left the electronic part of her life to whichever man was in it at the time—but once she had mastered it she was able to conjure up fabulous cupfuls of frothy coffee, which she sipped luxuriously while sitting on the lawn and which left thick white mustaches on her upper lip. There was, of course, no one to lick them off. Not that she minded that. On the contrary. After so long living in the shadow of a slow death, she felt a quiet, almost triumphant sense of release.

Still, she missed the Van Morrison. There were other albums of his she could have played, but they all came from different parts of her life, fragments of a musical autobiography that predated Tom, and were therefore so long ago now that it was hard to remember that they had happened to the same person. The pleasure of this album was that it felt new to who she was now. It had come the same week as the breakfast set, along with a brooding, melancholic version of Leonard Cohen songs sung by an American singer named Jennifer Warnes with a voice like raw silk, flaws and all.

This new music became a kind of benchmark of her progress. One day when she was in the car, “Famous Blue Raincoat” turned up to top volume, she imagined herself hearing it again in a couple of years, when the emotional landscape was different, and saying to herself, “Ah, yes, that was one of the records I split up with Tom to,” as if the act had been just another event in a life unfolding and not the end of it, as it so often felt now.

So much did she miss the Van Morrison that after a week or so she began a systematic search, taking down every CD from the shelf and checking it, to see if Van had somehow bedded himself down with Morrissey or Bryan Ferry by mistake. But the shiny little disc was nowhere to be found. It puzzled rather than worried her. She wondered briefly about Tom. Maybe he had appropriated it during one of his lightning raids on the house.

The atmosphere around the split-up had been so acrimonious that for a while it had seemed impossible for them to be in the same place at the same time. It was agreed that anything he needed he would take while she was out. He sent her notes: painful, formal little lists decorated with unpleasant remarks, detailing what and when. The “when” he honored, the “what” proved more problematic. In those first months she would often find herself looking for a certain plate or book, only to realize that it had gone missing. Of course, some of these things were genuinely theirs, rather than his or hers; seven years of shared life made it hard to remember what exactly belonged to whom. But that album, she knew, was hers. He didn’t even like Van Morrison, for God’s sake. She had thought about contacting him to check, but four months on, it still felt too soon to hear his voice. He might be tempted to read it as her needing an excuse to get in touch, and she couldn’t bear the idea of feeling vulnerable to his arrogance. Not yet. Not anymore. After a while she assumed she had just mislaid the disc somewhere. She got used to not hearing the music and gradually forgot all about it.

Toward the end of the summer, she went to New York for a couple of days’ work, staying at a hotel on the edge of Central Park. She had been looking forward to the trip, her first as a single woman again, had even extended it by a few days to include the weekend. But when the time came she found herself inexplicably depressed by it. The city was rank, exhausted by the summer’s heat, and the work dull. On the second evening she left the hotel for a stroll down Broadway, but the swelter left her dripping by the fourth block and she escaped instead into Tower Records, where the air was secondhand but bearable, and the music, by chance, Van Morrison.

It was a live double album recorded in San Francisco in 1994, proof that he had not only survived the eighties intact but managed to squeeze some creativity from the decade. She bought it instantly, along with an earlier concert—
Live at the Grand Opera House Belfast
—and a replacement for the CD she had lost earlier. Once she’d started riffling through the racks, she found she couldn’t stop. The Czech company that had sent her to help run its trade fair had given her three days’ expenses in hand. She spent it all in the next twenty minutes, plundering the backlists, buying up bands she had once danced or sung along to but couldn’t be bothered to replace with CDs because they were too expensive and she would only ever be able to play them when Tom was out. In retrospect she wondered if their musical incompatibility hadn’t been the source of all evil: what hope could there ever be for a rock ’n’ roll girl and a classical lover? The thought returned to her now as she defiantly picked out new bands she had barely heard of, let alone listened to. New music for a new life. On her way back to the hotel she stopped by an electronics store and bought a portable CD player on her Barclaycard just for the hell of it. She spent the rest of her trip curled up in bed, channel-surfing on the TV with the sound down and the headphones on, the music feeling more real than the place. And when the music got too powerful she danced around the hotel room, getting the shock of her life when she turned to find the Puerto Rican maid standing an inch behind her proffering new towels. They both broke into a cascade of laughter and she felt a sudden sense of warmth to the world, as if the trip had after all done some healing.

When she got home, the summer was on the wane, and it wasn’t long before she had to wear a sweater for her breakfast outside, but still she persisted. The music went with her, pounding out from the French windows, louder now, less melancholic. Thanks to the capriciousness of Victorian suburban planning, her garden and the ones around it were large, offering a kind of urban privacy, the neighbors either too far away or too lazy to complain. Maybe after so many serious symphonies they too enjoyed the change of music.

The sounds moved her feet as well as her mind. She bopped to Bruce Springsteen and Bob Seger as she deadheaded the roses and weeded the ground elder from between the dahlias, while inside she cleaned the kitchen to the beat of Counting Crows, Radiohead, and a handful of other new bands whose songs were becoming familiar enough for her to sing the words to. It was, she realized, a long time since she had heard so much of her own voice. It still surprised her that such a confident sound should emerge from such an otherwise shy personality.

It struck her that all this singing might mean that she was happy, but the word didn’t carry any meaning, and despite the music she would still have days where she would wake at four
A.M.
feeling as if the world had ended during the night and she was the only one left alive to mourn it. Seven and a half years. Too long for an affair, too short for a lifetime. The question of who she was now remained unanswered.

Maybe it would have been easier if she
had
seen Tom again, to remind herself of what she had escaped from. But although she had a number for him (he had fallen on his feet—a work colleague had gotten a post in Saudi and left a bachelor apartment in the Barbican needing a new tenant) she never rang it. And he never called her. Friends of friends told her he was doing fine; busy, looking good. Did that mean he never thought of her, never missed her at all? Did she miss him? Yes, was the honest answer to that, sometimes, even though their last eighteen months had been increasingly unbearable, the rows moving from voice into violence with long frozen truces in between.

The corroding of emotion had already infected the sex, or what remained of it. For a while it had made it almost exciting—angrier, more selfish on both sides. But it also held the seeds of a contempt that in the end would have poisoned them both. They both understood that, but it was she who had rebelled first, putting a stop to their mutual destruction. Abstinence brought its own tension, which neither of them chose to talk about. Add it to the list of unfinished business. Maybe with someone else he would make love differently: playful, creative, curious, the way they used to a million years ago. Maybe she would, too.

Not that she could imagine it. She didn’t miss the sex. On the contrary, she rather relished her new celibacy. She enjoyed the new expanse of the bed and its cool, empty spaces. It was part of a deeper enjoyment of the intimacy of being alone. She would spend long hours in the bathroom, a woman at her toilet—crimping, waxing, creaming, and pampering a body that was not to be seen by anyone but her. It was like being a teenager again—the pleasure being in the indulgence, cut off from any threat of disillusionment with reality.