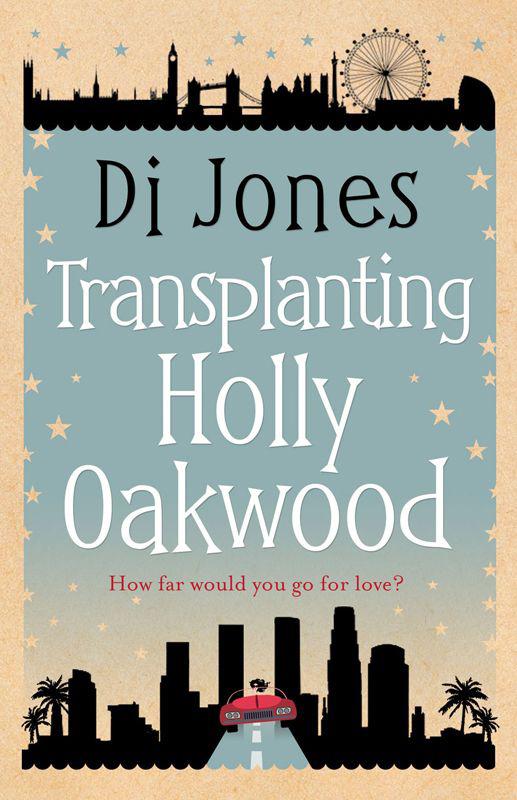 Transplanting Holly Oakwood
is a work of fiction. All the characters in the book are fictitious, and any resemblance to actual persons, living or dead, is purely coincidental.

All rights reserved. Except for text references by reviewers, no part of this book may be used or reproduced in any manner whatsoever without written permission from the author.

It always led back to you.

The best sister and friend a girl could have.

Thanks for believing in me.

To Craig, Brad, Paige and Courtney

I couldn’t have a better one.

Holly sat in the middle of a privet hedge outside her best friend’s apartment, planning her murder. She’d been there for an hour, her limbs bent like paperclips. She rubbed her arms where the hedge had scratched her and twisted to see a spider dangling beside her. Why hadn’t she worn long sleeves for heaven’s sake? She shifted, crouched back on her heels and peered up at the darkening sky. The air was dank and chilly and the smell of privet pungent in her nostrils. This vigil wasn’t the smartest thing she’d ever done, but she had to find out if her suspicions were correct.

A car pulled up. She sank back into the hedge, holding her breath and watching as a familiar figure crossed the road, strode down the path whistling, and let himself into the building.

Her breath came out in a rush. Her fingers tightened around the branch above her and it snapped, throwing her off balance. She rolled onto the ground and pressed her face to the grass, trying not to sob. Tom was supposed to be in New York, not here in Maida Vale.

She needed to be sure. After thirty minutes she clambered out, certain Tom wasn’t coming back. Cautiously she surveyed her surroundings, her breath whistling between her teeth. She shook out the kinks in her cramped limbs and through a haze of pain, disbelief and anger, reached the front door of the building.

What was Sonia’s security code? She knew it, of course she knew it – the exchange of security codes was as natural to their friendship as the secrets they shared. Her fingers fumbled on the cool smooth metal but eventually they remembered the pattern, and the door clicked open. She pushed it wide and stumbled into the foyer.

She couldn’t wait for the lift and ran up the stairs without pausing. Outside her friend’s door she wavered. Would her perfect life change irrevocably if she knocked? She thought of her less than happy single days before she met Tom. But she had to know, had to be sure. She raised her hand, then tapped on the door.

No answer. She knocked again.

She opened her mouth to tell Sonia it was her, but as the words of greeting bubbled in her throat, she clenched her teeth, deciding it was better to retain the element of surprise. Her hand hovered above the polished wood of the door, then she brought her knuckles down on the unyielding surface and rapped again.

A key scraped in the lock, the door opened, and Sonia stood in front of her. She’d never seen her friend look more beautiful. Her hair was dishevelled and her skin radiant and glowing, burnished with a fine mist of perspiration. Her eyes were soft and warm, but a split second later they widened in alarm.

“Holly.” Sonia’s fingers fluttered to her mouth, then down to the silk of her robe, which she tried to tighten around her. “I wasn’t expecting you.”

“Thought I’d drop round and see what you’re up to.” She struggled to keep her voice light, but could hear the edge of panic creeping into it. “Fancy a drink at the wine bar down the road?”

Sonia leant against the door. “It’s not convenient right now.”

“I’ll only come in for a minute then.”

Sonia’s refusal sharpened Holly’s resolve. She twisted with speed and grace, and in one fluid movement lined her shoulder to the door and threw her seventy five kilos against it. It yielded and she slid her foot behind it, levering Sonia off balance.

“Stop,” said Sonia, in a voice as sharp as new scissors. “You can’t barge in here.” Her perfume hung between them; exotic, heavy and insidious.

“None of your business.” Sonia’s chin lifted in defiance.

“Looks like it,” she said, as she moved into the living room. Clothes were scattered across the floor.

“Please leave. Now.” Sonia’s voice was shrill, the expression in her eyes frantic. Her mouth settled into a pencil straight line.

Holly bent down to the carpet and picked up a cabled fishermen’s jersey, which Tom had been wearing when he came into the building. It was tangled with a lacy white push up bra. She shook the bra loose, then held the jersey to her nose and inhaled the familiar scent.

“I bought this for Tom’s birthday,” she said reproachfully.

As Sonia stared at her slack-jawed, an irresistible impulse propelled Holly across the living room and down the passage. With white hot hands she opened the door to the bedroom and strode in.

Tom lay on Sonia’s bed. His damp skin shone in the lamplight and his eyes were closed, a smile playing on the corners of his mouth. One arm was propped behind his head, his other hand was stroking his erection.

She swallowed, then opened her mouth, but no words came.

Tom’s strokes quickened, and then, encountering silence, he opened one eye.

“Jesus H. Christ!” He sat up in alarm, his erection disappearing with his smile. “Good God, Holly, what are you doing here?” His cheeks blanched, his eyes widened to saucers, and the smell of fear and betrayal oozed from his pores.

Her soul drifted from the shrunken husk of her body and looked down at the scene dispassionately. It had never occurred to her before how quickly an erect penis could deflate, like a snail retracting into its shell when it senses danger.

Seconds later the corners of her mouth curled at the absurdity of the situation, and a strangled giggle escaped. Was this funny, was she going mad, or in shock? Her head was spinning, blood pounded in her veins, and bile burned the back of her throat.

“Why are you laughing?” Tom’s voice was incredulous, petulant.

She ignored Tom and spoke to Sonia. “You bitch. I thought you were my friend.”

“Don’t you have anything to say for yourself?”

“We love each other,” said Sonia at last. “Always have done.”

“Always? Pity you didn’t decide that before you introduced him to me.”

“We didn’t realise.” Sonia looked to Tom, but he shook his head. “I don’t know what to say,” said Sonia nervously, with no hint of regret or apology.

“I want to know how long this has been going on.” Holly’s voice was rising by degrees. “How long have you been shagging my boyfriend?”

“There’s no point in this,” said Tom. “We’ll talk later.” He swung his legs off the side of the bed and pulled the sheet around him.

“Later? What’s that supposed to mean?”

“At home.” His glance brushed across her, then settled on Sonia.

“I’m leaving,” said Holly with a dignity she didn’t feel, but as she turned something glinted in the light and caught her attention. It was a photo of Tom at the pub where Sonia had introduced them, and as she picked it up a raging flame exploded inside her.

She grabbed the bedside lamp with such force the cord ripped straight from the wall.

“No. Put that down.” Sonia backed away.

Holly swung the lamp, but it missed Sonia by inches. She lifted it again, satisfied by the fear on Sonia’s face. For the first time in her life she truly understood blood lust, could feel it surging through her veins and arteries, warming her, sustaining her, strengthening her.

Tom huddled on the bed behind a pillow, his mouth hanging open.

Holly took a step towards Sonia and lifted the lamp again. The burning sensation moved through her shoulders, down into her wrists, and she looked at her own fingers as if they belonged to someone else. A vein stood out on the back of her hand, blue against the whiteness of her skin. She grunted with effort as she slammed the lamp down, and closed her eyes, wondering if her blood had turned to anti-freeze.

It must have, for all the remorse she felt at killing her ex-best friend.

The lamp connected with a sickening thud and Holly opened her eyes to see it smashed and twisted on the side of the bed. Sonia was shuffling across the room on her bum.

Holly turned to the mirrored dressing table, with its bottles of expensive perfume and silver photo frames, and swung the lamp above it like a hammer. It crashed onto the surface, splintering the smooth glass into hundreds of jagged shards. The heady scent of Poison mingled with the odours of sex and fear.

“Get out of here, you lunatic.”

Holly froze for an instant, then, as if waking from a coma, regarded the destruction with a mixture of puzzlement and pleasure.

“Lunatic?” She swung the lamp again. “Too bloody right, and who wouldn’t be in this situation?”

“God, Tom, stop her.” Sonia cowered in a corner.

“No fear. Call the police.”

Holly threw the lamp down, moved towards the windows, and ran her hand over the crisp taffeta curtains. Gently she tugged at them to gauge their weight, then with a force that astonished her, ripped them down in one clean motion.

Tom burrowed into the pillows, shock and astonishment plain on his face. “Don’t come back to the flat,” Holly spat at him, wiping her hand over her damp forehead.

“Home? It’s not your bloody home.”

“Of course it is,” he said defiantly.

He chewed his lower lip and shook his head. “Holly,” he said, lowering his voice, “we need to talk, to sort this out.”

She swallowed the lump of pain rising in her throat. “Nothing to sort out. I never want to see you again.”

Disbelief, then anger, settled on his features. Her eyes raked his face but it wasn’t Tom she saw, the funny, kind and gentle partner who’d been part of her life for so long. Instead a controlling, arrogant stranger stared back at her, a man she adored but who was now Sonia’s lover. Rage and grief battled in her and she felt herself falling into a black hole.

I Own the Dawn: The Night Stalkers by Buchman, M. L.
Ruled by Love by Barbara Cartland
Swordsmen of Gor by John Norman
Snowfall (Arctic Station Bears Book 3) by Maeve Morrick, Amelie Hunt
Captive Moon by C. T. Adams, Cathy Clamp
The Perilous Life of Jade Yeo by Zen Cho
Lord Melchior by Varian Krylov
Christmas in Wine Country by Addison Westlake
A Million Miles From Boston by Karen Day
The Adventures of Kid Combat 3: Jones Strikes Back by Christopher Helwink
Our partner