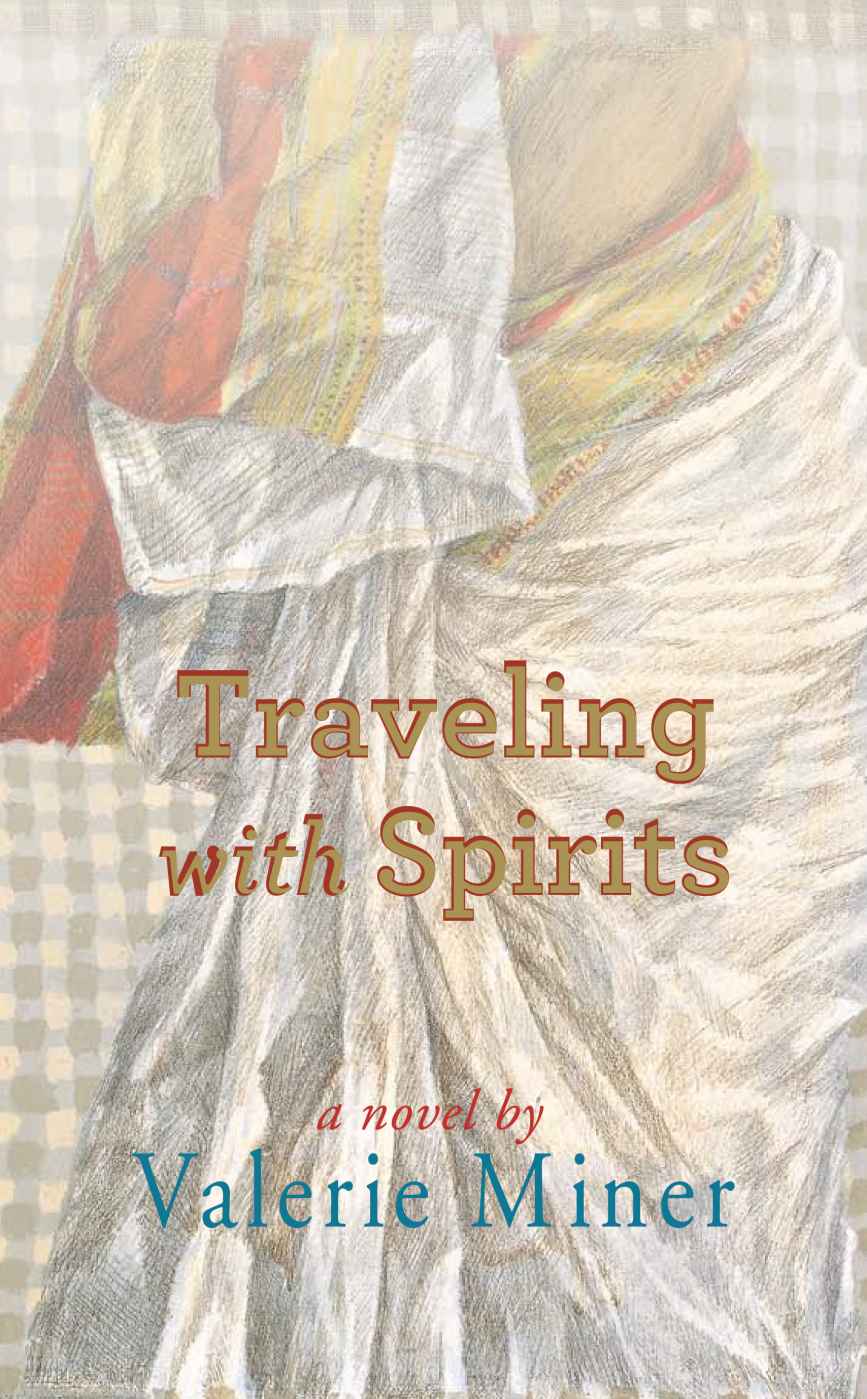 Other books by the author

Movement: A Novel in Stories,

Murder in the English Department

THE UNIVERSITY OF WEST ALABAMA

All rights reserved, including electronic text

Printed in the United States of America by

The quote on page 77 comes from Thomas Merton’s

This is a work of fiction. Any resemblance

to persons living or dead is coincidental.

Livingston Press is part of The University of West Alabama,

and thereby has non-profit status.

This book is dedicated to Marcia Dillon with gratitude

This being human is a guest house. Every morning a new arrival….

Welcome and entertain them all! Even if

they’re a crowd of sorrows, who violently

sweep your house empty of its furniture,

He may be clearing you out for

Be grateful for whoever comes, because

each has been sent

as a guide from beyond.

Translated by Coleman Barks with John Moyne,
The Essential Rumi

Crowds of savvy people weave confidently through the thick, smoky atmosphere of Indira Gandhi International Airport. Monica is as startled as a body can be at 11:30 p.m., after 19 hours of travel. Desperate for air and space after the marathon flight in her small, stuffy seat, she’s overwhelmed by the viscous, jostling environment of the vast terminal. Muslim men in succinct knitted caps bustle past Sikhs in the urgent baggage room turmoil. Women hurry, too, looking astonishingly fresh in vivid saris and salwar kameezes: pulsing blue, alarming chartreuse, beaming yellow. In contrast, the few Westerners appear pretty ragged—the denim backpackers and the suited executives—with tousled hair and grey faces.

Momentarily dazed, Monica leans on a wall. Everyone else in this enormous cold, damp, room has grabbed a trolley or staked out a position at the baggage carousel. Ashok Nair, the cordial professor who flew in the aisle seat next to her, snatches his battered brown leather suitcase and strides toward the exit. He doesn’t bother to wave good-bye. Ridiculous to feel abandoned. Of course he’s not her guardian angel. And he has invited her to lunch this week.

Magically, her three blue bags arrive together. She readies herself to heave them from the carousel, then grasping the first one, strains at its weight.

“Ma’am, these are belonging to you as well?” inquires a sturdy Sikh man in his fifties.

Panic rises—at the sight of this tall, strong man gripping her luggage—and falls at the sound of his kind, courteous tone.

“Yes, Sir, thank you,” she manages as he removes the second bag. She tugs off the third.

“You are most welcome.” His voice lowers. “If I may offer some advice?”

His skin has been pocked by some childhood infection. “Please do.”

“Pre-paid taxi. Go to the booth outside this customs area. Accept no other transportation.”

“Thank you.” She smiles as they both load bags on the trolley. “Thank you very much.”

Powder blue bags. She didn’t want her luggage confused with a stranger’s. How many weeks will the color last in India? She tries not to think how long she will last.

“Pre-paid taxi. Pre-paid taxi.” She repeats the phrase silently, steering the wobbly trolley. “Pre-paid taxi,” Father Koreth has emailed her. “Pre-paid taxi,” Professor Nair advised over their miniature dinners on the flight. “Pre-paid taxi,” she repeats over and over to calm herself through customs. Of course she has nothing to declare. (Nothing except: she’s thrilled, terrified, dazed to be here, to be so far from home.) Father Koreth and others have explained that Indian immigration is watchful of doctors working for Catholic missions. “They regard us as religious proselytizers, if you can imagine!” he wrote. “One must arrive with a single entry visa and strictly obey regulations.” So far she’s been very obedient. Still, she’s nervous as hell and can smell the sweat rising from beneath her tired deodorant.

“Nothing to Declare” lines are nerve-wracking. She tries to forget that last trip to Ireland where she splurged on Waterford crystal bowls and Belleek vases for Mom. Definitely over the customs limit then. Perhaps she’s over all kinds of limits here. The limits of her flexibility, courage, forbearance.

“Pre-paid taxi,” the mantra steadies her as indifferent customs agents flip through her documents.

Outside. Finally. The night is surprisingly cool. No, not night, early morning now. She peers through the thick soup of fog and smog for Taxi 1451. All around people are pushing and shouting.

“No, thank you,” she answers each one. Her voice jars with broad American syllables.

At last. Number 1451 license plate. Gripping the trolley with one hand, she waves frantically to the driver with the other.

A legless man slides his wheeled platform close to her shoes. “
Namaste ji,
” he calls upward.

Too ashamed to be surprised by her recklessness, she steps away from the beggar, directly into the chaos of honking and darting cars. Taxi 1451 screeches to a halt.

The cabbie stuffs her bags in the small trunk.

Monica summons the address of Mission House from her muddled brain.

Maybe it’s her accent. She has to get used to having an accent. Slowly, she repeats the address.

“Near the Bengali Market.” The synapses are reconnecting.

As they withdraw from the airport melee, she breathes a huge sigh of relief.
Pre-paid taxi. Pre-paid taxi
. The chant rattles through her sleepy head.

“Please switch on your headlights.” Her friendly, but firm, physician’s tone.

Monica is in his taxi, in a strange city, half a world away from home.

Her exasperated, anxious moan morphs into a cough. She replaces
Pre-paid taxi
with
Jesus guide us
. Same number of syllables, same soothing rhythm, and a more useful chant at the moment.

Eyes adjusting to the night, she sees, or thinks she sees, an elephant lumbering along the road. The city air is heavy with smoke and an odd, pleasantly sour smell. Parked near a brightly-lit intersection in a turquoise truck, vibrantly painted with flowers, a god she can’t identify and large, red stenciled letters. “My India is Great.”

“You are a priestess?”

The driver’s sudden curiosity startles her. “Pardon?” She leans forward to catch his words.

“Madame is a holy woman, a priestess? A nun?”

“No,” she grins, “no.” She imagines what her sister would say about her. Wicked Witch of the West, more likely.

Monica answers his lilting question with her strangely thickened Minnesota accent, “I am a doctor.”

“Ah,” he readjusts the plastic statue on his dashboard.

Krishna, she’s fairly certain. An avatar of Vishnu and one of the most popular Hindu deities. Brain continuing to return. Positive sign.

“We have our own religions in India,” he objects quietly.

She wants to tell him she’s studied Indian spiritual traditions. Wants to ask, do you know that Catholicism is one of those practices? That six million of your citizens are Catholic? St. Thomas brought Christ’s teaching here centuries before they reached Ireland. Rather, she says, “Indeed, you have a wealth of religious paths.”

“Certainly.” She’s irritated by the pointless tension between them. “I received Ayurvedic massages at home.”

“Home?” His musical voice lightens. “Where would your good home be?”

“Minneapolis.” Monica glances out the window, spotting three more elephants being led on a rope. Quite docile. This isn’t the Serengeti; she reminds herself not to gape.

“The Minnesota Twins!” he proclaims.

“Do you know Torii Hunter?”

She racks her brain for players’ names, strangely compelled to please.

The taxi slows in front of a large block of flats.

“Yes, yes,” she shakes her head and rummages through her purse.
Pre-paid taxi
, the words float through her drowsy brain.

He holds open the door.

Surely he’ll help her with the heavy luggage. Surely.

Surely there’s so much about this country Monica has yet to imagine.

A flashlight slices through the cold dark.

“Welcome, Ma’am, rather,” the stout middle-aged man corrects himself, “Welcome Dr. Murphy.” He shivers slightly in sandals and a rumpled beige uniform.

“Yes, yes. Welcome. Welcome. Come in before you will be freezing to death.”

He hoists the heaviest two suitcases on his shoulders before she can protest, leaving her the manageable roller bag and briefcase.

He’s right about the cold. Frigid night air pierces her airplane numbness. “Sorry, sorry. The lift is broken. But only three flights.”

Astonishingly nimble, Mr. Alexander scurries up the zigzag stairs and she scrambles after him. He sets the luggage down and opens a door to her “suite.”

As he flips the switch, an overhead bulb glows dimly. Once he turns on the table lamp, these large, tiled rooms appear dingier. “In here is the bath. You ignite the inverter for hot water.”

She’s grateful for the sit-down toilet. Looking forward to a bath in that tub. Hot water, the very thought revives.

Monica trails him into a tiny kitchen.

“Bottled water. Please dispense water from the cistern. Do not drink from the tap,” he cautions, rubbing his stomach vigorously in explanation.

She’s about to laugh. Monica won’t explain she specializes in gastro-intestinal infections. That she took a special international health course this fall to brush up on tropical diarrheal diseases, shigellosis and choler-typhoid fever. She remembers the cabbie, tells herself that this is Mr. Alexander’s country. “Yes,” she nods. “Thank you.”

Waking Up in Vegas by Romy Sommer
Courageous by Randy Alcorn
Girl Wonder's Winter Adventures by Malorie Blackman
The Baby And The Brandy (Ben Bracken 1) by Robert Parker
Christmas With You by Tracey Alvarez
The Tylenol Mafia by Scott Bartz
Must Love Highlanders by Grace Burrowes, Patience Griffin
Mistress of the Catacombs by Drake, David
Talent For Trouble by Bianca D'Arc
Margaret Moore by His Forbidden Kiss
Our partner