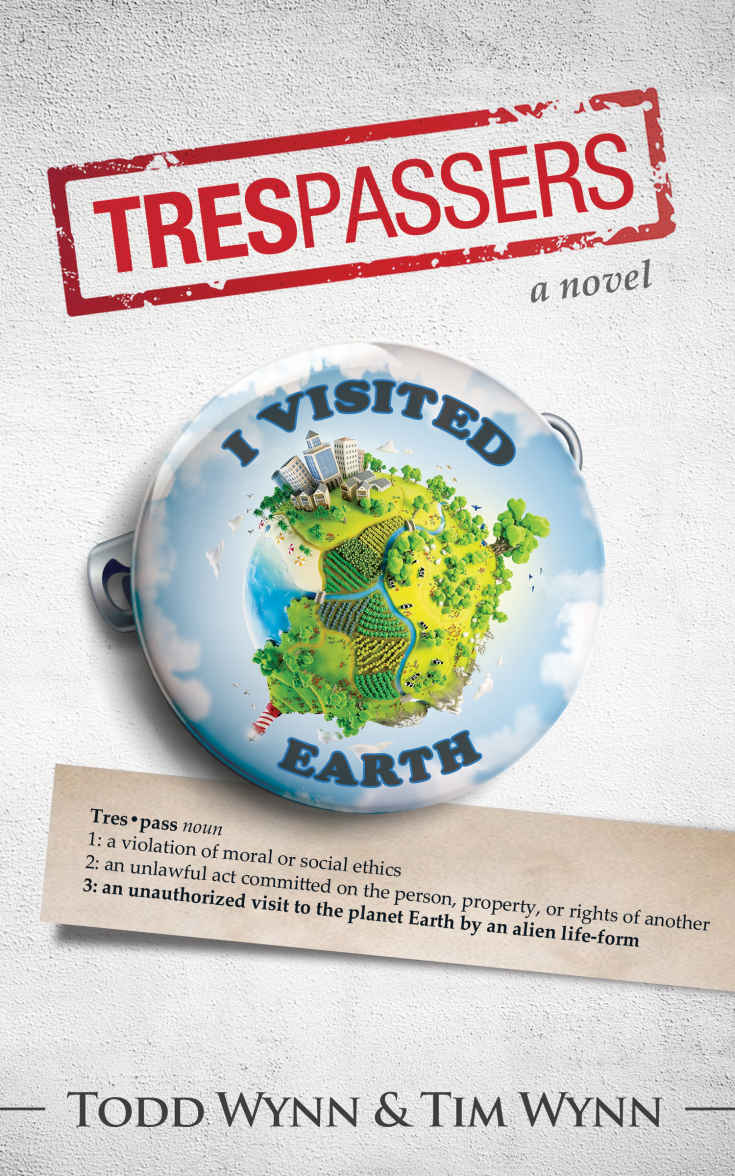 All rights reserved. No part of this book may be reproduced or transmitted in any form or by any electronic or mechanical means, including photocopying, recording, or by any information-storage-and-retrieval system, without written permission.

This book is a work of fiction. Names, characters, places, and incidents either are products of the authors
’
imagination or are used fictitiously. Any resemblance to actual events or locales or persons, living or dead, is entirely coincidental.

For Linda Wynn, Our Mother

for a Bad Abduction

Earth hovered a hundred feet below .
.
. or maybe it was ninety-eight; the gauge that determined this number was improperly calibrated and not to be trusted. Denokin (pronounced DEN-uh-kin) didn
’
t need gauges, though. He was used to eyeing up the distance on his own. He was good at his job, which involved shuttling passengers back and forth between hidden space stations and vibrant resort destinations like Earth.

“
Two minutes,
”
he called over his shoulder to the empty control room, as he glanced at the circular monitor on the console in front of him, which told him what he already knew: he was right on course, with a slow, controlled descent.
Two
minutes
was one of a handful of English phrases he had picked up in the course of his work. He always liked to use local language whenever he could.

“
I
’
ve got one,
”
he said, that being another English phrase he had mastered.

What he had
got
was an unsuspecting earthling on the ground below. Abduction of earthlings was a common element of his job, and the details of those abductions were usually fascinating to his passengers, so much so that he normally found several curious travelers peering over his shoulder during the abduction phase. But there seemed to be no such curiosity on this trip. This particular group was a solemn bunch, far too preoccupied with their own concerns to care.

There were no beginner
’
s nerves or novice excitement left in Denokin
’
s work. He had done this many times before .
.
. three thousand, four hundred sixty-seven times to be exact, not that he or anyone else was keeping track. His skills had developed into second nature, and this would be a routine plucking. In fact, this particular pluck would be one of the easiest he
’
d ever come across. The curve of the land and the surrounding forest made sure of that.

Denokin was looking at a young couple lounging romantically on a large red-and-white blanket with black lines crisscrossing its surface. They were lying on their sides, facing one another, almost dead center in the middle of a clearing. Thick trees circled one side of the clearing, while the other side swelled into a large rolling hill, building a perfect secluded area for frolicking love. It also happened to be a perfect spot for an abduction.

Denokin gripped the throttle as he eyed the display screen. His hand was identical to that of a human. So was his face, his build, all of him. He was thick, with broad shoulders, resembling the iconic image of a lumberjack. The only hint that he might be an alien was the massive spaceship that surrounded him. Without that, he could blend into any local bar, post office, or grocery store.

To be perfectly scientific about it, Denokin
was
human, as were the rest of the ship
’
s passengers. They were all human .
.
. just not earthling. This may seem like a minor point, but don
’
t be mistaken. Humans come in vastly more varieties than the average earthling would think. Consider that there are over ten thousand species of birds on the planet. It can be natural to think that
a bird is a bird
, but imagine a pelican, standing next to a cardinal, standing next to a penguin. A bird is very much not
just a bird
. In the same way, a human is not
just a human
.

Most earthlings were still discomforted by the fact that there were five races of earthling. So, they were certainly not ready to tackle the concept of different
species
of human.

This type of social analysis was not on Denokin
’
s mind at the moment. He was busy doing his job.

“
One minute,
”
he announced, using a more natural alien dialect this time.

“
That
’
ll be fine, thanks,
”
a voice called back, from down a narrow hallway, using the same alien dialect.

As the ship moved closer to Stewart and Mindy, the land on the other side of the ridge came into view. It was a park, crowded with people. Families and friends picnicked and barbecued. There were hide-and-seek games, pickup football games, bicyclists, and kite fliers. As the spacecraft drifted over the ridge, it would have thrown a shadow on the crowd below, but it was designed not to do that. Denokin
’
s ship was one of the latest luxury cruisers, equipped with high-end transpose technology built directly into the hull, letting light flow through and making it invisible to the human eye. This far exceeded the standard stealth generators found in most intergalactic cruisers. It also had a built-in sound-wave modifier, which cancelled the hum from the engines and left the crowd below oblivious to its presence.

Had they been allowed to see it, they would have seen a flat, round vessel about the size of a grocery store, with a rough exterior resembling rock. Any earthling would swear it wasn
’
t aerodynamic, but that only highlights Earth
’
s limited understanding of airflow patterns.

The ship moved back across the ridge and settled over the isolated couple in the middle of the open ground.

It
’
s almost like they want to get plucked
, Denokin thought to himself. There was no way for him to know that he had picked the wrong target, but he was about to find out.

On the red-and-white blanket with black lines crisscrossing its surface, Mindy breathed a tense breath. She was stiff and anxious, but trying to get her nerves under control. Stewart sensed this without looking at her. He smiled.

Mindy Craddock was twenty-six years old, with thick black hair, blessed with flawless skin, a sparkling complexion, and cute-as-a-button dimples. She kept her body concealed under modest clothing
—
a long, yellow sundress today
—
but it was clear that she was fit and trim.

Stewart Faulkner was in his early thirties and looked even younger. He had a thin build and a boyish charm. Light-brown hair slightly curled over his ears, and a confident smirk was burned onto his face. It told a quick story of his life .
.
. he was used to winning, and he was prepared to win again.

He pulled a tiny glass vial from his pocket and screwed a short syringe cap onto it, not a recreational drug, but a necessary medication. Without looking, he located a large vein in his arm. Mindy watched as he poked himself. The automated components inside the cap did their job, sucking the liquid from the vial and delivering it into his bloodstream.

Inside the ship, Denokin
’
s fingers simultaneously pressed the three buttons necessary to activate the abduction process. A door on the bottom of the ship began to slide open.

“
Don
’
t go anywhere,
”
Stewart smirked to Mindy. He looked up at the sky, seeing nothing. A vibration emanated from the base of the ship. The strange vibration enveloped Stewart, causing a smile to stretch across his face, while Mindy grimaced. A heavy silence bore down on them. Stewart was suddenly gone. Mindy stared into the open space where he had been, trying to take it in.

Midway between the ground and the ship, the wind was buzzing past Stewart
’
s cheeks. His stomach was left somewhere back on the ground, trying to catch up, and he wasn
’
t missing it at all. The force was equivalent to what science would call 10 g
’
s. Even 3 or 4 g
’
s could knock out most people, and Stewart should have been unconscious now
—
and possibly even dead from all the blood leaving his heart and pooling in his feet. But somehow, this ride came with all the thrills and none of the health hazards.

As he reached the undercarriage of the ship, his body was whipped into a horizontal position, facing up. A cushion of air greeted him and slowed his ascent. It was a comfortable, cool reception. As he entered the ship, a receiving harness was fitted around his body. It was less of a cage and more like a high-tech seatbelt that encompassed the whole body. The bands were about two inches thick and made of a gray metal that was soft and flexible, yet utterly unbreakable.

Inside the ship, the whole apparatus rose from the floor, and Stewart was now lying on his back on what resembled an exam table. The extensive harness made it look like a table for a patient who had plans of escaping. This was exactly the case on both accounts: that was the exact purpose of the design, and those were the exact plans of this patient.

The exam room was filled with most of the items you would expect to see, though a lot of them appeared to be a few steps beyond the reach of modern science. A specially designed mechanism fit to Stewart
’
s face and gently held his eyelids open, as strobes of light bombarded his pupils. This was designed to overload the brain in just such a way as to induce a deep-sleep similar to a coma. A side effect of this short-term and virtually harmless coma was that it often grayed the memories immediately before and after the coma, meaning that when a subject awoke in a field, that subject was more likely to dismiss this as a strange dream than a tale of alien abduction.

As the strobe light stopped and the mechanism released Stewart
’
s face, a tiny suction cup adhered to his hand, injecting him with a clear fluid called theramane
—
a highly effective tranquilizer that was designed to work directly on the muscles to prevent the body from moving. Even in a comatose state, the muscles are still functional and may react. This second step was a safeguard against spontaneous movement. It would have instantly put each muscle to sleep upon contact, but the formula that Stewart injected into himself from the little vial counteracted this effect.

Stewart pushed the contraption off, which retracted toward the ceiling in one fluid motion. He rotated into a seated position, and with a finger from each hand, wiped a contact lens from each eye. They had worked perfectly, shielding his pupils from the strobe lights. He was now inside the ship on his terms, unharnessed, unhypnotized, and unparalyzed.

Denokin entered the exam room, slowing to an uneasy stop as he noticed the empty exam table. His first thought was that he had missed the target altogether, drawing up nothing but air. His second thought was an image of the poor earthling falling from the ship and crashing back down to Earth. By the time he got around to entertaining the possibility that the earthling had escaped, it was too late. With a thud, Denokin
’
s large frame fell limp on the floor of the receiving lab. Stewart stood over him with a tranquilizer gun still in his grip. He savored the victory for a moment.