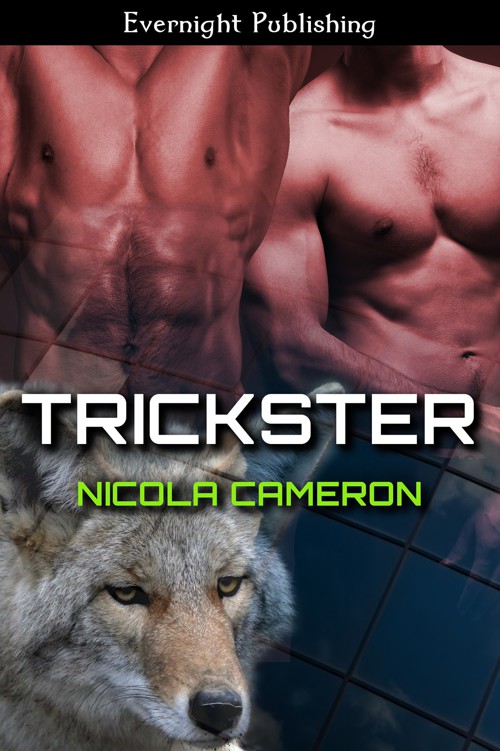 For
Keith Davenport, who stopped me from running amok on more than one
occasion.

He looked
around the room, empty except for the receptionist. As much as he loved Aimee,
both for her Army-trained organizational skills and her filthy sense of humor,
he knew damn well that the mating scent wasn’t coming from her. He took a
deeper sniff, and suppressed a howl. His mate had been in that very room not
less than ten minutes ago.
Goddamn it, I
go on my first vacation in years and I miss him by ten minutes?

Aimee
looked up from her keyboard, beaming at him. “Welcome back, my liege,” she
said, smacking a fist over her ample chest. “How were the Bahamas? More
importantly, where’s my souvenir?”

“Nice
to see you, too, Aims.” He didn’t want to admit that going on a cruise by
himself had been more than a little lonely. He’d spent much of the trip wishing
that he had someone who could travel with him to exotic places.

It looks like I’m about to get my wish.
“The
Bahamas were fine. And let me get into my office first before you start sucking
up for presents.” He leaned closer over the curved reception desk. “Did we get
a delivery or something in the last ten minutes or so? Or a visitor?”

The scent teased his nose, sending tendrils of need winding down
into his balls. “I can smell my mate.”

Her frown deepened. “Del, I’ve been
here since eight and I can tell you nobody’s been through here but employees...”
She blinked, her expression changing. ”Whoa. Including the new contract
programmers. Scott hired them last week for the Lone Star Credit Union job.”

Delaney relaxed. That had to be it.
Trickster’s CEO Scott Devlin had been hot to hire some contract talent, and Delaney
knew that he’d come back to find the last of the company’s empty cubicles
filled. It was just his luck that Scott had also hired the shifter who would
become Delaney’s mate, the other half of his heart. “That’s great. They’re over
in Engineering, right?”

He was already heading towards the
open plan area where the system developers worked.
I know I just got back from vacation, but Scott won’t give me a hard
time over taking tomorrow off. Especially after what happened with him and
Carmen.

“Del, wait.” Aimee stood up,
scooting around the desk.

He didn’t notice, lured on by that
amazing scent.
I’ll just track down my
mate, introduce myself, get us set up for dinner, and by midnight we’ll be
fucking our brains out and bonded. Poor guy, has he been scenting me all this
week from my office? He must be half-crazy by now—maybe I’d better take Tuesday
off, as well.

Somehow Aimee had gotten in front
of him, one small hand firmly planted in his chest. “Stop!”

“About the programmers.” She
glanced over her shoulder, then dropped her voice. “Del, I’m sorry. But they’re
human.”

“You’ve got to be fucking kidding
me,” Delaney said hollowly, staring across the expensive oak desk at his business
partner and pack Alpha. “They can’t
all
be human.”

“I’m telling you, Del, none of them
are shifters,” Scott said, spreading his hands in a silent apology. “We ran the
standard background check, plus that new blood test that we pass off as a drug
screen. All three of the programmers tested out as pure human, not even a hint
of shifter DNA.”

Groaning, Delaney scrubbed at his
face with both hands. He could smell his mate even in here
: sharp
salt, the bloody hint of iron, overlaid by the musk of clean, healthy male and
some (thank God) mild deodorant and body wash that didn’t shrivel his nose
hairs.

And
that luscious ribbon of pheromones that grabbed him by the dick and made his
coyote want to yip with glee. His balls ached, and the urge to shift and hunt
down the source of that scent produced a full body shiver. He took a deep
breath through his mouth, but even cutting his nose out of the equation didn’t
help. Now he could
taste
his mate.

His
human mate. Someone who had no idea that shifters existed and would not only
have to be introduced to the idea, but convinced not to tell the rest of the
world.

Delaney
grimaced. It wasn’t that he was speciesist or anything. He just didn’t find
humans attractive. They were so ...
bland
,
for lack of a better word. He wasn’t sure if it was being trapped in one skin
or their general lack of connection to the natural world, but humans never
seemed to have the raw sensuality and gusto for life that shifters possessed.
When it came to sex partners, he’d always found it easier, not to mention far
more satisfying, to stick to his own kind.

Until
now. He knew that Fate needed a laugh as much as anyone else, but did he have
to be the butt of this particular joke?

A
soft throat-clearing noise dragged his attention back to Scott. “Hey, it could
be worse,” the CEO said. “At least she’s not a bobcat or lynx shifter.”

Delaney
glared at him. “Not helping.”

Delaney
shrugged impatiently. He usually preferred women, but like many shifters he’d
had experience with same sex lovers. And the mating bond itself had no respect
for sexual orientation. “It happens. I don’t care. I just want to meet him.”

“Well,
it does narrow things down. We only hired one male programmer.” Scott rummaged
through the papers on his desk, locating one and passing it over to Delaney. “Name’s
Mark Fellowes. Here’s his CV.”

Delaney
sniffed the paper, and groaned. “Oh, God. Yeah, it’s him.” He forced himself to
actually read the CV and not lick at the traces of skin oil left on the paper. “Damn.
He’s really good, too. Please tell me he’s not married.”

“He’s
not married, but he said something about a girlfriend finding the job listing
for him.”

Delaney
growled under his breath.
Great, because
things weren’t complicated enough.
“
Yeah,
hi, nice to meet you, I’m your mate. I’m afraid I’m going to have to ask you to
dump your girlfriend and learn how to take it up the ass. Oh, by the way, I can
change into a coyote at will. How ‘bout those Cowboys?”

Scott
leaned back in his chair, giving him a sympathetic look. “Look, Del, I know what
you’re going through. You remember how I got when I scented Carmen?”

Delaney
did. Scott had first smelled his mate at the enormous Texas State Fair, and had
almost torn apart the Dallas-Fort Worth metroplex trying to track her down. “I
thought we were going to have to hose you down every hour.”

“Right,
so I know how it feels,” Scott said. “The thing is, we really lucked out with Fellowes.
He’s killer on security countermeasures, and he meshed really well with Fazia
and Meiying. In fact, I want to hire him once the Lone Star contract is
finished.”

“Great,
I’m totally behind you on that,” Delaney said, buzzing with impatience. “Can I
go meet him now?”

Scott
sighed. “I don’t think that’s a good idea. I’m trying to tell you not to go running
in there and scare the shit out of him. If he’s your mate, we both know the
girlfriend won’t last. Take it slow, let him get used to the idea.”

Struggling
to get his desire under control, Delaney took a shallow breath and nodded.
“Slow. Right. I can do that.”

Following the CEO’s suggestion, he forced
himself to go back to his office and start wading through the backlog of email
that had built up while he was on vacation. It took every shred of willpower he
had to ignore the mating scent, but the logical part of his brain knew that
Scott was right. He had to approach a human mate with a certain amount of tact.
A non-shifter couldn’t smell Delaney’s answering pheromones, and wouldn’t
understand why he was suddenly being pressed to a wall with the CTO’s tongue
down his throat.
I can always wander down
to Engineering later this morning, just cruise by and see what he looks like.
Nice and casual, no stress, no strain.

A Deal to Die For by Josie Belle
The Cruelest Cut by Rick Reed
At the Firefly Gate by Linda Newbery
Shelter of Hope by Margaret Daley
The Widowmaker: Volume 1 in the Widowmaker Trilogy by Mike Resnick
The Dark Huntsman: A Fantasy Romance of The Black Court (Tales of The Black Court Book 1) by Jessica Aspen
Spellfire by Jessica Andersen
Jonah's Return (Detroit Heat Book 3) by Lynn, Davida
Outbreak by Christine Fonseca
The Chocolate War by Robert Cormier
Our partner