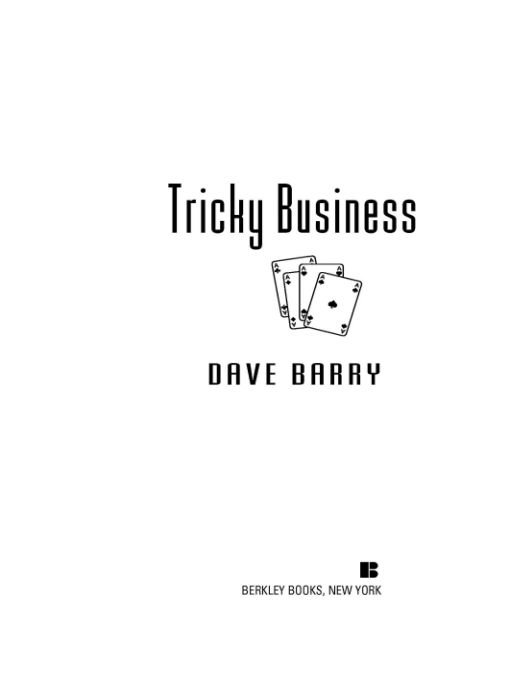 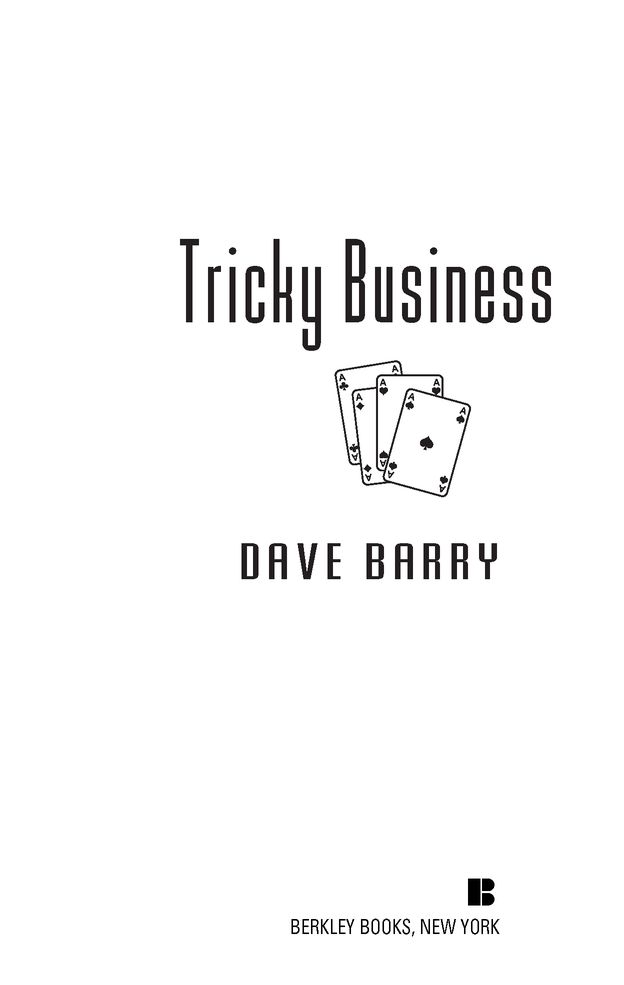 THIS BOOK IS DEDICATED TO THE PEOPLE OF SOUTH FLORIDA,
FOR BEING SO CONSISTENTLY WEIRD.
ACKNOWLEDGMENTS AND WARNING
I'm going to start with the same warning I put in my first novel,
Big Trouble
, only this time I'll be more explicit and use a larger typeface:
THIS BOOK CONTAINS SOME BAD WORDS.
I stress this because when
Big Trouble
was published, even though it had a warning at the beginning, I got mail from people who were upset about the language. I wrote them back and explained that, yes, it did have some unsavory language, but that was because the story involved some unsavory characters, and that is the way they talk. Characters like these don't say: “I am going to blow your goshdarned head off, you rascal!” They just don't.
So let me stress that:
THIS BOOK CONTAINS SOME BAD WORDS.
Or, to put it another way:
IF YOU DO NOT WISH TO SEE BAD WORDS,
Â
PLEASE DO NOT READ THIS BOOK. THANK YOU.
Next, I'd like to thank some people. I'll start with my editor at Putnam, Neil Nyren, who somehow remains eerily calm when the book deadline has long since passed, and the book cover has been printed, and the catalog copy for the book has been written, and yet Neil has not yet received what the publishing industry refers to, technically, as “the book.”
I also thank my suave and urbane agent, Al Hart, who regularly assures me that, not to worry, the book will get done, and, all evidence to the contrary, I
believe
him, because that is how suave and urbane he is.
I thank Judi Smith, my wonderful staff and research department, who is efficient to the point of being prescient, and who never runs from the room, screaming, which is certainly what
I
would do, if I worked for me.
I also thank the people who provided technical guidance when I was writing the book, particularly Jeff Berkowitz, Alan Greer, Patricia Seitz, Ben Stavis, and Rob Stavis. By “provided technical guidance,” I mean they listened thoughtfully to some of my earlier plot concepts, and then they politely explained to me that I was an idiot. I especially thank my friend Gene Weingarten, who is insane but who also gave me a huge shove in the right direction when I really needed it.
I thank Gene Singletary, who took the trouble to get me the phone numbers of a couple of people who I bet would have given me some really useful information if I had called them. Gene is also the finest caterer I have ever met.
I thank my writer friends, particularly Jeff Arch, Paul Levine, and Ridley Pearson, for their moral support.
I thank my two wonderful children, Rob and Sophie, although I forbid Sophie from reading this book, assuming that she learns to read.
Finally, and most of all, I thank my wife, Michelle, a sportswriter who works in the very same room where I work. When two people can be on deadline so many times in the same room and still want to eat dinner together at the end of the day, you know that's love.

Not Another Bad Date by Rachel Gibson
Shot Through the Heart by Niki Burnham
Sweet Torments: The Best of Alex Jordaine by Jordaine, Alex
Suckerpunch: (2011) by Jeremy Brown
Queen (Brotherhood of the Throne) by Jane Glatt
In Your Arms Again by Smith, Kathryn
Severed by Sarah Alderson
UNSEEN by John Michael Hileman
False Gods by Graham McNeill
Flora's Very Windy Day by Jeanne Birdsall
Our partner