Read Trouble with the Law Online 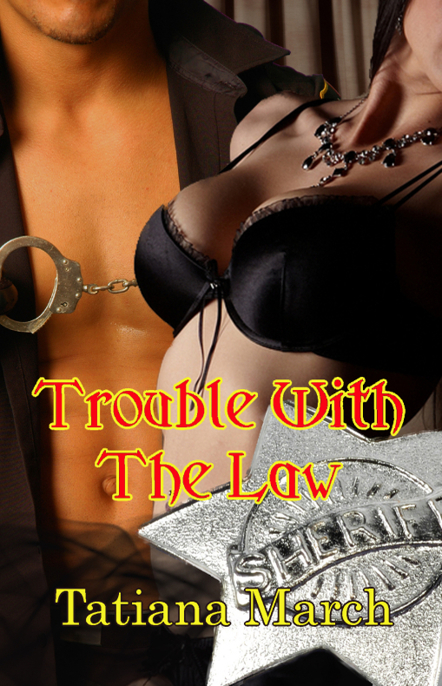 To Courtney and Tiffany, my wonderful editors who helped to make this a better book.

Justine Whitmore crouched down and tipped the contents of her satin evening bag over the gravel ground. Just to make sure, she ran her hands over the spilled clutter.

In the darkness, her fingers closed over a credit card, a few coins, a lipstick—but no room key.

She peered at her gold watch, her face furrowed with concern.
in the morning. Not the best time to go pounding on the door of a sedate country inn.

As she rose to her feet, her eyes fell on a wooden bench by the wall beneath a wisteria. The sweet scent of flowers filled the balmy air. In the sky, a golden August moon hung like a giant lantern, casting a glow over the house and the parking lot.

In her silver Mercury sedan, a half empty bottle of champagne stood wedged in a bucket of ice. Sandra had shoved it at her as compensation for not being able to drink the wedding toasts because she had to drive.

She could sit outside, and while away the hours until someone woke.

Justine shivered on the bench, sipping her third glass of champagne. The night air had turned cool, and she needed to pee. Above her, the dark windows stared down like a row of unseeing eyes.

Bouncing up to her feet, she surveyed the gables and turrets. A sturdy trellis with creepers covered the wall, and a thick drainpipe ran down from the gutter. And wasn’t that her room right at the top, with the window she’d left ajar to combat the muggy August heat?

Swaying on her heels, Justine suppressed a champagne-fueled hiccup. She teetered in for a closer inspection. All she needed was to climb up, then step across and flop in over the sill. Piece of cake for someone who at college had rock climbed to grade five point seven on the difficulty scale.

Kicking off her flimsy sandals, she slithered out of her dress and folded it over the bench. She’d splurged on a slinky Dior, a consolation prize for once again being a wedding guest instead of the bride. No way would she risk ripping a garment worth two thousand bucks. Unclipping her gold watch, she hid it under the dress, together with her car keys and satin evening bag.

Then she blew into her palms and attacked the trellis.

Piece of cake, just as she’d expected. She jerked the window wide and flopped inside with a thud. The ledge scraped her shins as she tumbled through. Wincing with pain, she scampered to her feet and inspected the damage. Drops of blood trickled from the cuts, and her silk stockings were torn, but at least her garter belt and lace panties remained intact. She adjusted her bra, and groped her way to the bedside lamp.

Her hand butted against a large object. As she fumbled along the lumpy contours, a scream pierced the darkness. Justine froze. She prepared to move again, but the bedside light snapped on, illuminating the room with a yellow glow.

“What in heaven’s name?” A grouchy male voice muttered out the words of complaint, and a frail figure clad in striped flannel bolted up on the bed.

Confused, Justine retreated to the window. “I’m sorry,” she said, and another hiccup escaped her chest. “I think I’ve got the wrong room.”

“It’s all right, Clara.” The man in striped pajamas reached out to pat the mountain of flesh next to him. “The lady’s got the wrong room.”

The bedspread sailed to the floor, and an enormous woman wearing a long frilly nightgown clambered to her feet. “Hussy!” she cried. “Harlot!” She stepped forward to block the man’s view.

Justine surveyed the scene, and although she knew that her reaction was like tossing gunpowder into flames, she couldn’t help herself. She clutched her sides and burst into peals of laughter.

“Call the police,” the woman said. “I’ll restrain the harlot if she tries to flee.”

The man flickered a glance between them, then shrugged his narrow shoulders and reached for the telephone on the nightstand.

Justine opened her mouth to protest, but when she caught the determined scowl on the woman’s face, she slunk into the corner. She was too tired to argue. She’d curl up on the floor and sleep until the police arrived to rescue her.

Did the police always arrive so quickly in small towns? Justine wondered as a car crunched to a halt on the gravel drive. Footsteps clattered up the stairs, and a knock sounded at the door.

“Mrs. Harper?” A slight young man in a khaki uniform stepped into the room.

Puzzled, Justine stared at the officer. She’d listened to the man in the striped pajamas making the call, and she couldn’t recall him mentioning his name, only the room number.

“This tramp broke in and made advances toward my husband,” the woman said with an extravagant waddle of her double chin.

“I didn’t—” Justine began, but the young officer silenced her with an upheld hand.

“I’m a guest,” Justine explained wearily. “I got into the wrong room by mistake.”

“Let’s clear this up in the office downstairs.” The officer smoothed his mousy hair in a resigned gesture. “The landlord is already awake.”

“I’m coming with you,” the matron said firmly, and they trooped down the stairs.

The lanky man behind the counter raked his fingers through his disheveled hair and bent down to inspect the guest ledger. “I have Mr. and Mrs. Simmons in room seven.”

“I know,” Justine said with a sigh, realizing the added complication. “I was booked into the motel on Route 54. Mr. and Mrs. Simmons have their little boy with them. When they heard the motel has a pool, they asked to switch. Although they had already picked up the key, they hadn’t settled in. I took their key and dumped my stuff in the room on my way to the reception. I planned to explain in the morning, but I lost the key. Rather than ring the doorbell and wake up everyone, I tried to get in through the window.”

Mrs. Harper threw the uniformed young man a withering look. “If you believe that the taxpayers aren’t getting the police service they’re paying for.”

“I guess we’d better clear this up at the station.” The officer reached out to take Justine’s arm.

She whirled to him. “You’ve got to be kidding.”

“The taxpayers expect the law to be upheld,” Mrs. Harper declared.

“Are you arresting me?” Justine demanded as the young officer marched her down the stairs.

“No.” He propelled her along. “I’m requesting that you come with me to the station so we can clear this up without interference from Mrs. Harper.”

“You can’t possibly think I’m a hooker.” She craned to look at him over her shoulder. “My clothes and my car are outside. I’ll show you my ID, and you can make a few phone calls.”

“Where?” He stopped on the porch and surveyed the front drive.

Justine flinched as she realized how it might look. If she took him to the bench where she had left her clothes, the baby-faced cop would see the empty bottle of champagne and might think she’d been drinking and driving.

She snapped her mouth shut, and flopped on the back seat of the patrol car with a mutinous expression on her face.