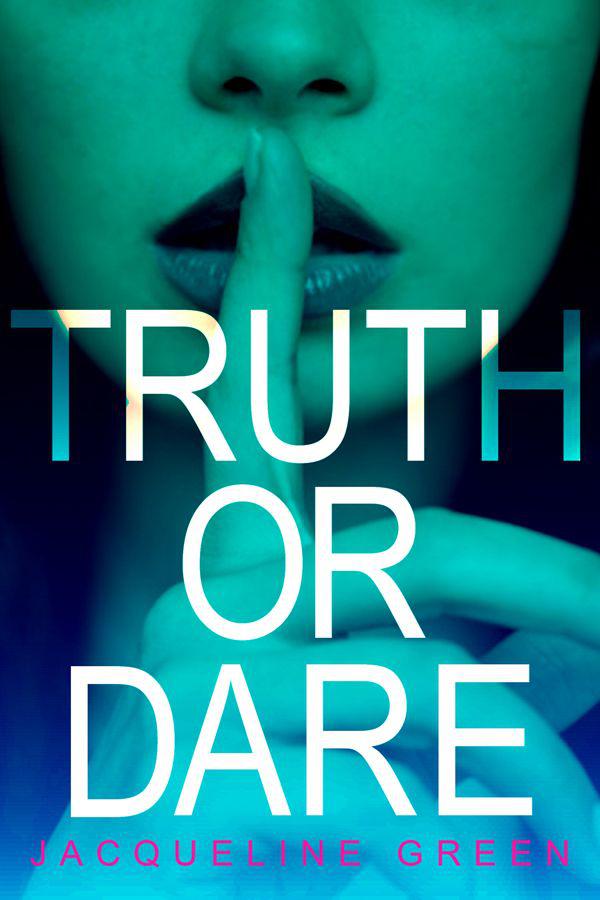 THE WATER WAS EVERYWHERE. IT WAS SOAKING HER
clothes and in her ears and burning her eyes. It wrapped around her like a cocoon, like arms, like chains. She waited for the terror to hit. But all she could think was:
Finally.

Her lungs screamed. The water was pulling her down, swallowing her whole. It wanted her. Another Lost Girl to join its depths. Maybe she’d always known it would end like this. Maybe she’d always known how much the truth would cost. Her mind was flickering. Images blurred in and out. A one-eared teddy bear. A toy train made of painted steel. A woman’s face, streaked with mascara.

She tried to hold on to the pictures, but blackness was creeping in, thick and heavy, and she could no longer remember what any of it meant. Something slipped out of her grip. Four charms dangling from a gold chain. Another image flickered—a memory, elusive, breaking
apart on the waves. But then the blackness swept that away, too, and all that was left was water.

And after that: nothing.

IF ONLY SYDNEY COULD FOLLOW THE TIDE. SHE
leaned against the pool-deck railing at the Echo Bay Golf & Country Club, watching as the ocean receded toward the horizon.
Go ahead and run
, it seemed to be saying.
Screw it all.
It was good advice, for someone who was able to take it. Unfortunately, that person wasn’t her.

“Believe me, being a lifeguard isn’t all about looking pretty in the shorts.” At the sound of her coworker Calum’s voice, Sydney glanced over her shoulder. Calum was standing a couple of feet away, talking to a girl in a black bikini. Several white-blond curls hung in his eyes, and thanks to his love affair with SPF 75, his skin looked as if it hadn’t seen a single ray of sun all summer. “The fact of the matter is,” he continued, flashing his whistle at the girl like an Olympic medal, “in a drowning scenario, I have approximately one hundred and twenty seconds to extricate the victim from the water and perform cardiopulmonary resuscitation—”

“I have to go to the bathroom,” the girl blurted out, cutting him off. Backing away, she quickly disappeared into the crowded pool deck.

Sydney laughed. Calum had been trying to score a girl at the Club all summer long—and failing with what had to be record-breaking consistency. It wasn’t that he was bad-looking. He had a swimmer’s build from all his hours spent lifeguarding, that mop of pretty blond curls, and eyes that were somewhere between brown and gold. The problem was he was clueless. He did things like calculating the odds of skin damage based on the SPF level of a girl’s suntan lotion—and then informing her about it.

Sydney knew that if he bothered to tell the girls who he was—the son of the richest man in Echo Bay, a man who had articles written about his technology company in
Time
magazine, a man who owned his own private
island
—he might have had more of a chance. At least with the tourists. But she also knew he wasn’t the type to flaunt his pedigree. And since he was working at the country club instead of lounging at it, none of the girls ever guessed.

Sydney turned her attention back to the beach. She knew she had to get back to work, but she couldn’t help but watch as, out on a sandbar, a woman focused her camera on the tall gray rock visible only during low tide.

The Phantom Rock. All summer long there had been a steady flow of tourists doing the very same thing, vying to see the spot where Nicole Mayor, one of the Lost Girls, had died six years ago.

Sydney knew that nothing fascinated people in Echo Bay more than the Lost Girls: three beautiful local girls who, over the years, had each died in the ocean during Echo Bay’s historical Fall Festival. But with the reopening of Nicole Mayor’s case as a murder trial this summer, that fascination had turned into something more like a frenzy. Suddenly everyone wanted to know everything they could about Nicole Mayor, Meryl Bauer, and Kyla Kern—the infamous Lost Girls.

“Enjoying the view?” Calum asked. Sydney spun around to see him standing behind her, his trademark lopsided smile back on his face. Sometimes it amazed Sydney how easygoing Calum was. Everyone in town knew his family’s history. His older sister, Meryl, was the first Lost Girl—drowning when Calum was in second grade. Four years later, his mom committed suicide, in practically the same spot. It made Sydney wonder if that was why he’d become a lifeguard: his way of fighting back. Not that she’d ever ask him. The one and only time she’d broached the subject of his family, he’d made it clear he had zero interest in dredging up the past. And
that
she understood.

“Just taking a break,” Sydney said. She pulled her long, dark hair into a loose bun, shaking her shaggy bangs out of her eyes.

“Sorry to interrupt, but…” Calum lifted his arms, which had a massive pile of rose garlands draped over them. “Looks like everything’s coming up roses.”

“Don’t shoot the messenger. Tony brought these out for us to drape along the edges of the tables.
Prudently
, of course,” Calum added, lowering his voice in a spot-on imitation of Tony, their creep of a boss. “He then went on to explain that
prudently
means wisely, or sensibly.”

Sydney laughed. “Because clearly the term is outside the scope of our limited vocabulary.” The opening notes to a Katy Perry song blasted from the speakers, and several girls—Sydney recognized them as sophomores from school—squealed loudly, jumping up from their lounge chairs to dance.

Trying to ignore the ear-splitting strains of pop music, Sydney walked up to the nearest table and began draping the garland around
its edge. Two girls lounging nearby glanced up from their magazines, shooting her disdainful looks. She could tell right away they were vacationers. Like all the Boston girls who spent their summers in the beachside fishing town of Echo Bay, Sydney knew that their bikinis probably cost more than her car. Luckily, as of Monday they would all be gone: a mass exodus trickling out in their Mercedes/Lexus/BMWs, back to their real homes and real lives. Sometimes Sydney wondered what that would be like—to cast your life off like a second skin and just disappear.

“So what do you think?” Calum followed her, helping her arrange the unruly garlands. “Skinny-dip tonight?”

Sydney rolled her eyes. “You wish.” Her khaki shorts slid down on her skinny hips, and she automatically tugged them back up.

Calum raised both hands in a gesture of surrender. “But seriously, you want to go for a swim after work?”

Even Sydney had to admit the pool looked tempting: Its water was a sparkling robin’s egg blue and a waterfall rushed soothingly over a small rock cave. But it wasn’t meant for her. Nothing here was. “I’d rather choke on a lobster claw,” she said, smiling innocently.

Calum made an exasperated noise. “You need to learn to have some fun, Sydney Morgan.” He backed away, aiming his finger at her chest. A man whose shoulders were the same color as his Red Sox hat sidestepped him to avoid collision. “You just wait. One day soon I’ll have you cannonballing into that pool.”

Sydney couldn’t help but laugh. “Don’t hold your breath.” Moving on to another table, she glanced at her watch. If she hurried, she realized, she could still make it home in time to use the kitchen for a couple of hours before her mom got back from work. The kitchen was the only room in their tiny apartment that worked for developing her photos.
Swap a red lightbulb in for the regular one, stick some cardboard in the tiny window, add a few developing bins, and voilà: insta-darkroom.

Sydney knew she was one of the last people on the planet who still shot nondigital photos. But she loved the process of developing. When she first started, it had reminded her of chasing butterflies with her dad: how she’d swing her net down with all her might, then hold her breath as she lifted it up to find out what she’d trapped underneath. Sometimes she’d hold her breath in the darkroom, too, until—
whoosh
—the photos burst to life in front of her, a shower of light and shadow, black and white. No computer could match that.

It helped that Winslow Academy had a state-of-the-art darkroom, donated by an alumnus who believed students should learn about all types of photography. It was probably the only time Sydney had ever agreed with one of Winslow’s wealthy, pompous alumni. Sydney had tried something new with her latest roll of film, something a little riskier, and she was dying to see how it had turned out. Her photos hadn’t been bad lately, but
not bad
wasn’t going to get her into the Rhode Island School of Design. She needed amazing.

“He said he wants to pamper me. I was like, pamper
away
, honey.” At the sound of Emerson Cunningham’s voice, Sydney tensed up. Emerson sauntered out of the Club’s spa, a small towel wrapped around her hair and an even smaller one wrapped around her torso. Marta Lazarus was with her in a skimpy sarong, her red hair loose and wavy down her back. Sydney ducked behind an umbrella. She was in no mood to deal with either of them.

Emerson pulled the towel off her head, letting her glossy black hair tumble over her shoulders. As she scouted the deck area for empty chairs, she let her other towel fall away, too, revealing a yellow bikini that looked annoyingly good against her dark skin. Emerson was one
of those infuriating people who were just genetically blessed. Her mom had been one of the first African American models to ever reach supermodel status, and Emerson had inherited her long legs and toffee-colored skin—along with her blond dad’s hazel eyes. The combination was gorgeous, and Emerson obviously knew it. “I just can’t get over how different he is from Ratner,” Emerson went on. “Remind me again why I ever dated a high school boy?”

“Because those were the only boys you knew?” Marta offered.

“Uh, except for him.” Marta made a face in the direction of a third lounge chair nearby, where Joey Bakersfield was sitting. He’d been there for hours, hunched over the green notebook he was always doodling in, his long, sandy-colored hair falling across his face like a veil. Earlier, Sydney had heard one of the cocktail waitresses ask if he wanted to order anything, but like usual with Joey, she’d been met with total silence.

Disc by Laurence E. Dahners
The Wake-Up by Robert Ferrigno
Dark Mind (The Dark Mind Trilogy Book 1) by Matthew Goldstein
Open Minds by Susan Kaye Quinn
Board Approved by Jessica Jayne
How to Get Filthy Rich in Rising Asia by Mohsin Hamid
Jack on the Tracks by Jack Gantos
The Rift by Bob Mayer
Veiled Passages by Terri Reid
New Blood (The Blood Saga Book 2) by Unknown
Our partner