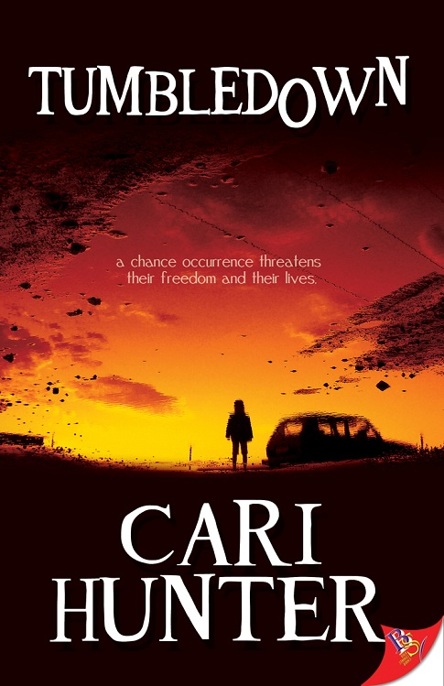 How far would you go to protect the one you love?

Two years after surviving their ordeal at the hands of white supremacists, Alex Pascal and Sarah Kent have new identities, new careers, and a new home together. The FBI warned them to keep their heads down, and a small town in Maine seems like the perfect place to do this, until a chance occurrence sets in motion a chain of events that no one could have predicted. With enemies closing in and friends turning their backs, Alex and Sarah find themselves fighting not only for their freedom, but for their lives.

Thanks first and foremost to Rad, for giving this one a chance. To Cindy, for comma-wrangling and for sound advice. To Sheri, for another gorgeous cover. To Kelly (my long-suffering Work Wife), who gets possibly the worst name-check ever and is still giddy about it. To the lovely ladies on the C-Spot forum, for Kitty and Frances, laughs, loot, and knitted goods. To all those who picked up the first two, left feedback, made friends, and gave Boo such a big head. And to Cat, for a splendid, tireless beta, but mainly for her unwavering support and love.

We make a sensational team

It was always the first thing Caleb did, before his cup of coffee, before he dressed, before he ate the breakfast that Leah set in front of him. He had told her countless times how expensive the computer had been, as if that fact alone meant his efforts were righteous. The sleek black machine was high spec, and the e-mails were sent into a series of temporary accounts that would be difficult for the feds to track or trace.

Leah placed his coffee on the desk and stood by his side, counting the messages as they arrived: twelve in total. The program began to decrypt the code in which they were written. Five of the messages served only to confirm that their senders would continue their efforts, the latest in facial recognition software and straightforward searches on name variants having found nothing. With sweat dampening the palms of her hands, she watched as Caleb opened each of the remaining seven in sequence. One by one, he compared the photographs or descriptions with the two images stored on his desktop. She knew every inch of the young women’s faces by now, and she discerned as quickly as he did that none of the search algorithms had yielded anything useful.

She stepped back as he closed the computer down and ran his hand over the coarse growth of stubble on his chin. The negative outcome was not unexpected, nor would it discourage his efforts, but she could never be certain how he would react in the short term.

“My daddy always preached patience and perseverance,” he said, his tone pleasant and conversational.

“Your daddy would be proud of you,” she told him. She could feel the sweat cooling on her skin.

He nodded once before picking up his coffee and heading into the bathroom. She waited for the door to close completely and then sat in his chair until the trembling stopped.

The water swirled rapidly down the drain, leaving rust-red clinging to the white porcelain in a vivid tidemark. Sarah gripped the brush and scrubbed at the stubborn stains beneath her fingernails. The skin on her fingertips grew tender from the vigorousness of her efforts, but she continued until only the faintest trace of the color remained. She used a detergent-soaked cloth to wipe the sink clean and dumped the garbage into a cardboard box so it would be easier to burn. When she swiped the steam from the bathroom mirror, she barely recognized the woman looking back at her.

The exclamation—and the wolf whistle that followed it—came from the doorway. Sarah grinned, turning slowly to face her partner.

“You like it?” she asked. She fished an empty pack out of the box and read from the back cover. “This month we’ve gone for
Autumn Brilliance
, which apparently ‘adds a touch of mischief to every woman’s day with its feisty hints of red and plum.’” She checked the mirror again and frowned. “Personally, all I see is brown.”

Alex crossed the small distance between them and let strands of Sarah’s hair fall through her fingers before taking hold of one particular length. “This bit looks kinda feisty,” she said seriously.

Sarah laughed. “Idiot.” The laugh turned into a sigh as she felt Alex’s lips touch the side of her neck. “Y’know, it’s not true what they say about blondes having more fun.”

“No?” Alex breathed the word against Sarah’s throat. “That’s a relief; I don’t remember the last time you were blond.” Her hands were already beneath Sarah’s tank top and stroking across her chest. “So you feeling mischievous, then?”

“Maybe,” Sarah hedged, but she hummed low in her throat as Alex pushed a hand below the waistband of her pants. “Oh shit,
definitely
.”

Alex chuckled and Sarah leaned back into the warmth of her body, feeling the starchy scratch of Alex’s uniform shirt against her bare arms.

“Not bad.” Alex adjusted her grip, all but propping Sarah up as she moved her other hand in slow, lazy circles. “Have to say, though, it just got a hell of a lot better.”

Sarah murmured when Alex kissed her forehead, but she didn’t wake. Tiptoeing out of the darkened bedroom, Alex heard sharp toenails tap-tapping across the wooden floor of the living room as Tilly—their rescue mutt with lopsided ears and a tail that had been chewed off by some unidentified critter—came to join her.

“Hey, girl.” She patted Tilly’s side and let her lead the way through the kitchen to the back door. “Five minutes, then you can help me do my checks.”

The air that came drafting in when Alex opened the door hadn’t been cooled much by the setting of the sun, and it carried with it the scent of pine and of the honeysuckle that Sarah had planted close to the back porch. Tilly headed straight toward the trees and disappeared into the shadows, muffled grunts and the sound of her scrabbling in the dry grasses the only indication of her whereabouts. A thin crescent moon and the soft glow from the kitchen window provided enough light for Alex to negotiate her way down from the porch and across to the hen coop to ensure that the girls were safely secured for the night. An indignant bout of clucking told her that they were all accounted for and unimpressed at being disturbed.

In response to a low call, Tilly trotted back to Alex, and together they returned to the cabin. The bolts installed to the top and bottom of the back door slid easily into place and, with Tilly at her heels, Alex walked around each room, checking that the windows were locked and that nothing had been disturbed.

“Okay, Tilly-bud,” she said and then shook her head at herself; the nickname was Sarah’s invention, but it seemed to be sticking. “You’re in charge.” The announcement earned her disdainful looks from Flossie and Bandit, the two cats entwined on the sofa, but they seemed too cozy to hold a real grudge. She left the menagerie to its own devices and crept back into the bedroom.

“All safe and sound?” Sarah asked, her voice thick with sleep.

Alex lay down beside her and inched closer to her warmth. “Snug as a bug in a hug,” she confirmed.

“Like that makes any more sense.” Alex spoke through a yawn, and the only response was Sarah’s steady breathing. She smiled, tucked the sheets around them both, and closed her eyes.

The high-pitched beep shocked Alex from a dreamless sleep. For a moment, she was completely disoriented, her heart beating so rapidly against her breastbone that it felt like it was quivering in her chest. Her surroundings slowly came into focus: the simple wooden posts of the large bed, the knitted throws cast carelessly toward the end of the mattress, welcome in winter but too thick for the summer heat. They had forgotten to close the drapes, and through the slats on the shutters she could see that it was still dark outside.

“Yours or mine?” Sarah sounded as muddled as Alex felt. Alex heard her slapping against the small table at her side of the bed, and the beeping noise shifted, broadcasting itself with greater intensity as Sarah lifted her pager.

“Oh, whose bloody stupid idea was this?” With a groan, Sarah rolled over and sat up, her movements automatic and clumsy as she reached for the clothes always set out in readiness.

“I think it was your idea,” Alex said, flicking a lamp on so that Sarah could see to get dressed. Sarah turned to scowl at her, and Alex choked back a laugh. “Yep, pretty sure it was yours.”

Two minutes later, Sarah had made a phone call and was heading into the living room, one sock flapping where she hadn’t quite pulled it up enough. Her hands reached automatically to tie her hair back, though it was too short to need that now. Alex followed her out and perched on the arm of the sofa, watching her absently pet Tilly in passing and then pick up her bag.

“Go back to sleep, love,” Sarah said, although she must have known that Alex would do nothing of the sort.

“Be safe.” Something in Alex’s expression or the tone of her voice must have given her away, because Sarah ran back and kissed her gently.

The soft touch on Alex’s cheek made her want to grab hold of Sarah’s hand and force her to stay home, but the contact was only fleeting and she was gone before Alex could say or do anything else.

“Dammit,” Alex whispered, listening to the Jeep’s tires crunching over the loose stones of the driveway. As if sensing her distress, Flossie inched onto her knee, while Bandit stalked into the kitchen and demanded his breakfast in a series of shrill yowls. Alex shook her head at his increasingly desperate dramatics, trying instead to concentrate on Flossie’s purring in the hope that it would soothe her nerves. “I know, I know,” she said as Flossie kneaded her thighs and showed no real indication that she was listening. “Sarah’s a big girl who can take care of herself.” Tilly’s ears pricked up at the mention of Sarah’s name and she gave a yip.