Read Tunnel in the Sky Online

Tunnel in the Sky 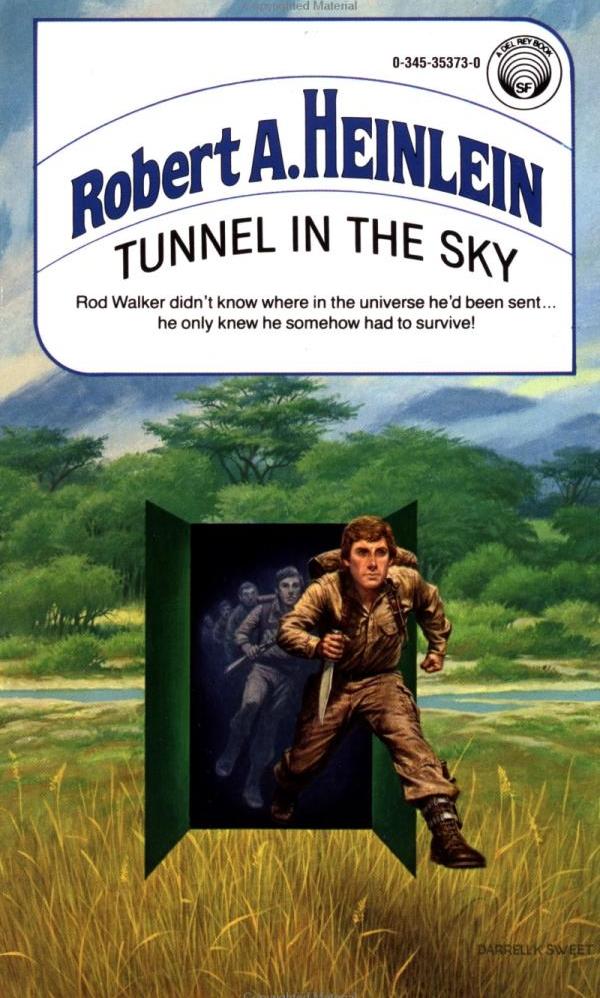 Tunnel In The Sky

Copyright 1955 by Robert A. Heinlein

The bulletin board outside lecture hall 1712-A of Patrick Henry High School showed a flashing red light. Rod Walker pushed his way into a knot of students and tried to see what the special notice had to say. He received an elbow in the stomach, accompanied by: “Hey! Quit shoving!”

“Sorry. Take it easy, Jimmy.” Rod locked the elbow in a bone breaker but put no pressure on, craned his neck to look over Jimmy Throxton's head. “What's on the board?”

A voice near the board answered him. “Because tomorrow it's 'Hail, Caesar, we who are about to die-'“

“So?” Rod felt his stomach tighten as it always did before an examination. Someone moved aside and he managed to read the notice:

SPECIAL NOTICE to all students Course 410

There will be no class Friday the 14th.

Twenty-Four Hour Notice is hereby given of final examination in Solo Survival. Students will present themselves for physical check at 0900 Saturday in the dispensary of Templeton Gate and will start passing through the gate at 1000, using three-minute intervals by lot.

ANY planet, ANY climate, ANY terrain;

NO rules, ALL weapons, ANY equipment;

TEAMING IS PERMITTED but teams will not be allowed to pass through the gate in company;

TEST DURATION is not less than forty-eight hours, not more than ten days.

Dr. Matson will be available for advice and consultation until 1700 Friday.

Test may be postponed Only on recommendation of examining physician, but any student may withdraw from the course without administrative penalty up until 1000 Saturday.

Good luck and long life to you all!

R. ROERICH, for the Board

Rod Walker reread the notice slowly, while trying to quiet the quiver in his nerves. He checked off the test conditions-why, those were not “conditions” but a total lack of conditions, no limits of any sort! They could dump you through the gate and the next instant you might be facing a polar bear at forty below-or wrestling an Octopus deep in warm salt water.

Or, he added, faced up to some three-headed horror on a planet you had never heard of.

He heard a soprano voice complaining, “'Twenty-four hour notice!' Why, it's less than twenty hours now. That's not fair.”

Another girl answered, “What's the difference? I wish we were starting this minute. I won't get a wink of sleep tonight.”

“If we are supposed to have twenty-four hours to get ready, then we ought to have them. Fair is fair.”

Another student, a tall, husky Zulu girl, chuckled softly. “Go on in. Tell the Deacon that.”

Rod backed out of the press, taking Jimmy Throxton with him. He felt that he knew what “Deacon” Matson would say . . . something about the irrelevancy of fairness to survival. He chewed over the bait in paragraph five; nobody would say boo if he dropped the course. After all, “Advanced Survival' was properly a college. course; he would graduate without it.

But he knew down deep that if he lost his nerve now, he would never take the course later.

Jimmy said nervously, “What d'you think of it, Rod?”

“All right, I guess. But I'd like to know whether or not to wear my long-handled underwear. Do you suppose the Deacon would give us a hint?”

“Him? Not him! He thinks a broken leg is the height of humor. That man would eat his own grandmother- without salt.”

“Yeah. . . what about it?” Jimmy's eyes shifted away. Rod felt a moment's irritation. He was making a suggestion as delicate as a proposal of marriage, an offer to put his own life in the same basket with Jimmy's. The greatest risk in a solo test was that a fellow just had to sleep sometime . . . but a team could split it up and stand watch over each other.

Jimmy must know that Rod was better than he was, with any weapon or bare hands; the proposition was to his advantage. Yet here he was hesitating as if he thought Rod might handicap him. “What's the matter, Jim?” Rod said bleakly. “Figure you're safer going it alone?”

“You mean you'd rather not team with me?”

“Then what did you mean?”

“I meant- Look, Rod, I surely do thank you. I won't forget it. But that notice said something else, too.”

“It said we could dump this durned course and still graduate. And I just happened to remember that I don't need it for the retail clothing business.”

“Huh? I thought you had ambitions to become a wideangled lawyer?'

“So exotic jurisprudence loses its brightest jewel. . . so what do I care? It will make my old man very happy to learn that I've decided to stick with the family business.”

“You mean you're scared.”

“Good! Now let's both give a classic demonstration of how to survive and stay alive by marching down to the Registrar's office and bravely signing our names to withdrawal slips.”

“You mean you're sticking?”

“Look, Rod, have you looked over the statistics on last year's classes?”

“No. And I don't want to. So long.” Rod turned sharply and headed for the classroom door, leaving Jimmy to stare after him with a troubled look.

The lecture room was occupied by a dozen or so of the seminar's students. Doctor Matson, the “Deacon,” was squatting tailor-fashion on one corner of his desk and holding forth informally. He was a small man and spare, with a leathery face, a patch over one eye, and most of three fingers missing from his left hand. On his chest were miniature ribbons, marking service in three famous first expeditions; one carried a tiny diamond cluster that showed him to be the last living member of that group.

Rod slipped into the second row. The Deacon's eye flicked at him as he went on talking. “I don't understand the complaints,” he said jovially. “The test conditions say 'all weapons' so you can protect yourself any way you like. . . from a slingshot to a cobalt bomb. I think final examination should be bare hands, not so much as a nail file. But the Board of Education doesn't agree, so we do it this sissy way instead.” He shrugged and grinned.

“Uh, Doctor, I take it then that the Board knows that we are going to run into dangerous animals?”

“Eh? You surely will! The most dangerous animal known.”

“Doctor, if you mean that literally-”

“Then I take it that we are either being sent to Mithra and will have to watch out for snow apes, or we are going to stay on Terra and be dumped where we can expect leopards. Am I right?”

The Deacon shook his head despairingly. “My boy, you had better cancel and take this course over. Those dumb brutes aren't dangerous.”

“But Jasper says, in Predators and Prey, that the two trickiest, most dangerous-”

“Jasper's maiden aunt! I'm talking about the real King of the Beasts, the only animal that is always dangerous, even when not hungry. The two-legged brute. Take a look around you!”

Seven Grams of Lead by Thomson, Keith
Live to Tell by Wendy Corsi Staub
Silk Is For Seduction by Loretta Chase
The Vampire Narcise by Colleen Gleason
Rocketship Patrol by Greco, J.I.
Heart of Fire by Kristen Painter
Legend of the Ravenstone by M.S. Verish
Tom All-Alone's by Lynn Shepherd
Friends Forever! by Grace Dent
The Da-Da-De-Da-Da Code by Robert Rankin
Our partner