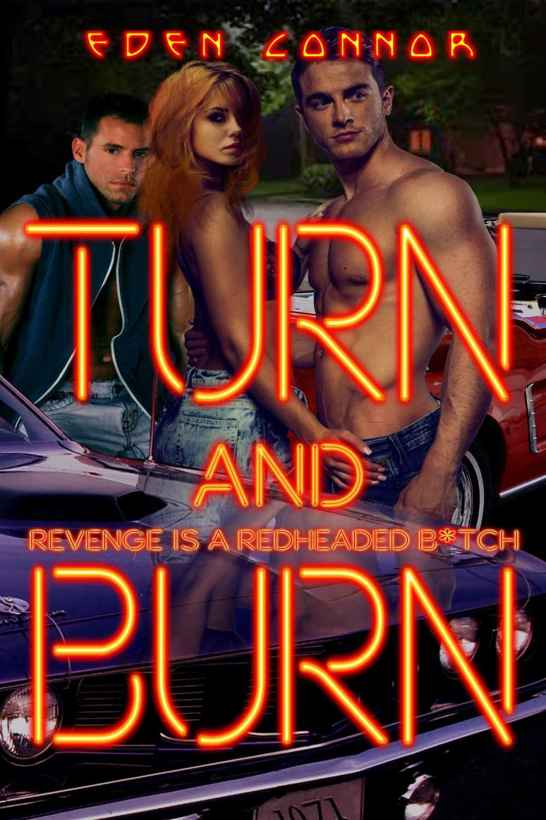 Further Reading: Rain On Me

To the relative who took time to offer an impassioned plea for me to ‘stop wasting my talent writing smut’, I want to encourage you to stay in touch, bless your heart. Please, do let me know when you start to feel the burn.

I honestly thought I’d be done with these characters once
Gas or Ass
reached 40k words. And we all know that didn’t happen. I opened a new document to start Turn & Burn thinking pretty much the same thing. I wrote about 25k, then realized I’d started the story too far down the timeline. I made a new start, planning to insert the first document when I reached that spot.

And I’m not there yet.

I never expected a story that was just supposed to be a quick ‘eff you’ in response to the hostility of a few catty authors to morph into a trilogy. But in order to get to the happily-ever-after we all want for Shelby, that’s what I have to do.

So be on the lookout for
Pedal to the Metal
, coming this fall. Hopefully then, you’ll better understand the limited roles some characters had in Turn & Burn. I had them so deeply woven into the fabric of T&B, expecting to reach the end of the story, that there just was no way to rip them out and make them wait in the wings once I accepted that I’d need three books to tell the tale.

Turn & Burn is, at its heart, a love story, as well as a story of the south, written by a southern gal, so grab a glass of ice tea and settle back. The only race here is on the page.

And from the bottom of my heart, thank you for loving Shelby, Caroline, and the Hannah brothers.

“F
or real, Harry? People are still buying their Thanksgiving turkeys.” Scowling at the elaborate Christmas wreath on my best friend’s door, I banged the brass knocker and rolled my eyes. Harry Kinston loved Christmas about as much as I hated it. I should know. Whenever Converse College closed their dorms, his little townhouse became my home. Meaning, every major holiday and summer break, I moved in with a gay man who’d become my surrogate brother.

I banged the knocker again, cursing under my breath because I’d given my key to Harry’s new boyfriend. He hadn’t made me another copy yet. Probably afraid I’d walk in on him and Phillip doing the nasty. I should never have confessed I thought watching the pair get it on would be hot.

“Let me in, Harry!”
What in the name of God is that music?
I couldn’t make out the song, but the bouncy rhythm didn’t sound like a Christmas carol, thank God, nor his beloved country music. Panicking, I dug in my purse to be sure I’d brought along a pair of earplugs.

At least a minute went by while I shivered on the stoop. They were doing it.

Nope, Phillip’s car’s not here
. Groaning with impatience, I sent him a text.
Open up, it’s the Grinch! I’ve come to take back Christmas.

When the door swung open, I wasn’t sure which alarmed me more—Robin Gibbs’ ear-piercing rendition of
If I Can’t Have You
, or the collection of GI Joe dolls on the table behind Harry. The Joes lived on the foyer table, but they’d had a sketchy makeover.

“Really?” I had to shout. “Disco? And your army is going to mutiny.” Leaning around Harry, I took a second study at the assortment of action figures. Last week, they’d worn camo. Tonight, they wore white robes and halos. One or two even sported wings.

No one would ever guess Harry was gay by looking at his apartment. The place looked like Dale—my stepfather—had decorated it, except baseball was the featured sport, not racing. What the hell was going on?

Harry thumbed his cell phone and the volume mercifully dropped I took a deep breath and spit out the bad news.

“We have to send that Kolby Barnes standup back. I checked the tracking number. I know FedEx delivered it yesterday, so don’t try to tell me it’s not here. I’ll help you find something else to give Phillip.” I pressed my palms together and stuck them underneath my chin. “I’ll even pay for it. Please, Harry, I have to send it back.”

The life-sized cardboard cutout of the rising NASCAR superstar was to be Harry’s Christmas gift for his boyfriend. The young prosecutor Harry had fallen for was a NASCAR fan. Dale had to pull strings with his boss to get me one of the coveted advertising pieces in advance of their release.

And now, the strings had pulled back.

“I made Phillip take it with him when he left last night.”

My heart dropped to the tops of my Tiffany Blue Nikes. “You did what? I gotta have it back!”

He lifted his chin. “No, Shelby. I’m not asking for it back. Phillip can screw around all he likes, but every time he looks at that ugly thing, he’ll think of me.”

“But you don’t do exclusive. I mean, it’s not like you guys said the L-word or anything.”

He squeezed me, but soon let go. “Get inside before you let all the heat out.”

I stalked into the living room and slung my purse over the back of the sofa. “Wait. First, I’m making us a pitcher of margaritas.” Darting into the kitchen, I returned with a bottle and two glasses. When he raised his brows, I waved the fifth of Jose Cuervo Gold. “Screw the margarita mix. This is definitely a straight tequila night.”

“So, what has you shrieking like a banshee? That tone. It’s just so... attractive. Every male badger within fifty miles must have a hard-on.” Harry snatched one of the glasses I held and flopped into his recliner.

I poured his glass half full. “Mr. Ridenhour called today. He asked if the package had arrived, then wanted to know if I’d mind doing him a favor. He wants to surprise Dale at the team’s Christmas party. With me. And a plaque for twenty-five years’ service.” Ignoring my glass, I took a sip from the bottle. “Phillip’s fucking hero has feet of clay. Otherwise, they’d have finished in the top ten and the whole team would be on a damn cruise.”

Ridenhour Motorsports had finished in the money ever since I’d been in the family. When that happened, the team owner took the whole team on a cruise from Christmas to New Years. Meaning, I hadn’t had to worry about my mother begging me to come home for the holidays for the past three years. This past season had been a disaster, so she was already burning up my phone, insisting I had to spend Christmas in Concord, North Carolina.

I’d rather spend it in Hell.

Harry shoved upright. The hopeless look faded from his eyes. I didn’t want to see him sad, but the excitement blazing in them now made me want to... hide behind something really big, but I poured him another shot of tequila. With any luck, I could get him drunk enough to call Phillip and ask him to return the gift.

“Hey, get someone to take your photo with Barnes. Then, you can Photoshop me into it and I’ll send it to Phillip. Just a post card saying, ‘hello, and fuck you’.”

I slammed the bottle onto the end table. “Harry! Have you lost your mind? I can’t go. My stepbrothers will be there.”

“Yes, they will. And you know what? You talk like a badass, Shelby. Some days, you even
are
a badass, but you’ve been running from this for way too long. I mean, what better place to confront them than a roomful of people their dad works with?”

Hi, y’all. I’m Shelby and my stepbrothers sold me as a prostitute. Is he nuts?

“Oh, no. They both work for Ridenhour now.” Colt was driving in the light truck circuit, but working his way up quickly. Caine was taking classes at NASCAR University, whatever the hell that might be. I only knew what my stepbrothers were up to because of Mom’s emails.

“Even better. Walk your ass right through the door, dressed up so damn fine, they won’t know what hit them. Then, you make those bastards squirm. At least find out why, Shelby. Kids out to have a good time is one thing, but to go behind your back and sell the chance to fuck you? I’d want revenge. You’re a hell of a lot stronger now than you were at eighteen. Threaten to go to the cops.”

What good would that do now?

I didn’t feel my next gulp of liquor because my heart started jumping around like a chicken with its head cut off. “I can’t, Harry.”
Gee, guess you forgot the part about the sheriff fucking me, too?
“I can’t face them. And let us not forget, my mother took Colt’s side.”

Harry’s expression turned sly. “But you never told their dad. And what about that little old man you met at Krispy Kreme? He talked like the father was a stand up guy. Did you ever think about telling Dale what his sons did to you?”

The older gentleman, Ernie Tipton, had told me an amazing story about my stepfather. Moreover, it had taken Dale only three days to track me to Spartanburg, but he hadn’t fussed. He’d told me how much he admired me for going after what I wanted, then he handed me the keys to his prized ’71 Barracuda convertible again. He’d made good on every promise he’d made me. He treated me like an adult.

Yeah, in one of the most awkward turn of events in the entire history of my awkward life, I actually liked my stepfather. Dale had recently given in to Mom’s begging to build a new house and things between them seemed great.

So Colt and Caine weren’t going away. They loomed over my life like a rain cloud.

“Harry, when you came out to your mother, she asked when you were going to find the right man and adopt her grandchild. My mother asked why I’d try to ruin her marriage by telling such a lie about Colt.” I waved the bottle. “I’m not agreeing to anything under the influence. Tell me about Philip.”

the Hunted (1977) by Leonard, Elmore
Aster Wood and the Book of Leveling (Volume 2) by J B Cantwell
Unallocated Space: A Thriller (Sam Flatt Book 1) by Jerry Hatchett
Archive 17 by Sam Eastland
The Regency by Cynthia Harrod-Eagles
Molly's War by Maggie Hope
Hallowed by Bryant Delafosse
Demon Squad 6 The Best of Enemies by Tim Marquitz
Remnants: Season of Fire by Lisa Tawn Bergren
Sinful Knowledge (The Millionaires Social Club) by VonSant, Kat
Our partner