Twice in a Lifetime (Love Found) 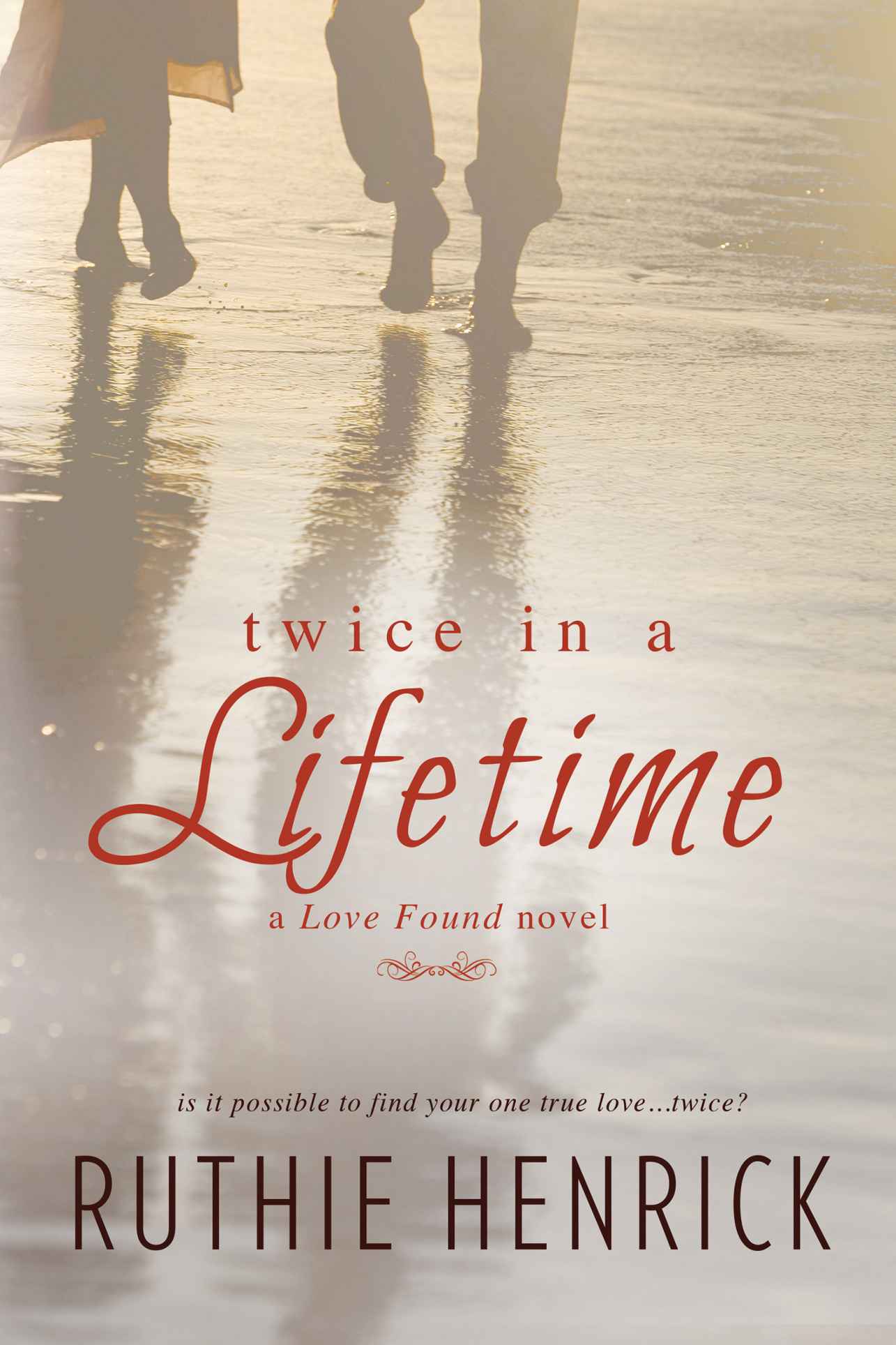 Twice in a Lifetime

This is a work of fiction. Names, places, incidents and characters are either products of the author’s imagination or are used fictitiously. Any resemblance to actual persons, living or dead, events or locales is entirely coincidental.

All rights are reserved, including the right to reproduce or transmit this book or portions thereof in any form or by any means whatsoever, including photocopying, recording, or using any information retrieval system without the written permission of the author, except for the use of brief quotations in a book review.

For the Big Kahuna

My Once in a Lifetime

Alexandra Tate had loved her husband. Then she’d hated him. But after three years of laying her soul bare, she could finally accept him.

She just said goodbye to Doctor Baker for the last time. Pulled away from the therapist's office and drove through town with the woman’s words echoing off the block and stucco buildings lining the street. “
You’ve had quite a journey, Allie. I’m pleased with the progress you’ve made. I think you’re ready to leave the past where it belongs. In the past.”
The comfort of her doctor’s arms as she offered a final hug was meant to warm her. As was the boost of parting advice. “
Be happy.”

By all rights triumph should shimmer in her veins. The hard part was over, after all. But instead of the thrilling sensation of accomplishment—the invisible cloak of victory she longed for—the only sensation curling through her right now was the passive lassitude of acquiescence.

On a sigh she turned her car into a nearby strip mall. She’d put her life on hold to search for answers, and found few. But she could live with that. Eyes bare against the bright morning sun she scanned the parking lot, whipped into an empty space and climbed out. Doctor Baker was right. It was time to move on.

An easy slap anchored the hem of her sundress before it caught a gust. The clack of her strappy sandals echoed off the sidewalk as she dashed into the florist. The fragrance—heavy, heady, nearly cloying—assaulted her as she swung open the door.

The beefy woman behind the counter didn’t bother to look up, just continued to stuff pale pink roses one after another into a sea of citrus stems and airy fern. “Help you?”

With a quick scan of the displays, Allie spotted what she presumed was her order. This part was easy, she knew what he liked. She cleared her throat to get the woman’s attention.

“Excuse me, I called earlier. The name’s Tate.” She aimed a finger toward the cooler. “Are those mine?”

The woman raised her eyes—just her eyes—and peered over the top of safety orange frames. Fake pearls were barely visible as they hung from one ear to the other across the back of her fleshy neck. The gaudy garland caught the glasses as she slipped them from her nose with fingers stained green. “Tate, you say? Imagine they are.”

Allie drummed the counter as the florist shuffled across industrial vinyl in orthopedic shoes, then returned and slid the tissue-wrapped bundle across the counter. In an impatient scrawl Allie signed the charge slip. “Thanks for your help,” flew over her shoulder on her way out the door. She’d be on the freeway within minutes.

Her thumbs tapped the rhythm of the bass line pouring through in-dash speakers as her tires whined on the blacktop. The rude glare of morning sun sliced through the windshield, forcing her to dive through her purse for sunglasses. She slipped them on as she cruised the freeway, heading east. Her day—which for three years was slated as her independence day—in reality fell a little short.

But she was limping from the battlefield whole
.

Mirrors checked, she steered her vehicle into the fast lane. After three tumultuous years she would allow herself no more guilt, no more self-doubt. Her breath escaped in a rush of relief as welcome as the cool air blowing into the sedan through vents.

Even mid-morning, it would take a while to get through traffic. Her bare legs stuck to the leather seat as she shuffled to settle comfortably. In the past she needed this time to gird herself. To prime. But after today’s visit with Doctor Baker it was merely a trip across town.

At least, she needed it to be that.

Following Ben’s accident she’d needed to start a new life—she had no choice. But now, with time as a buffer, she was changed. She was solid, confident. Once again in control.

With a flick of the turn signal she dodged cars one lane at a time until she landed on the off ramp. The route through town was a warren of twisted streets, but she was off the tangle of the interstate, and nearly there. The sign stood just ahead.
Sunnyside.

Her foot light on the gas, she eased around the corner. Patchy shade spilled through towering jacarandas as she crept along, the respite from the harsh mid-August sun welcome.

The slow breath she drew in through her nose was calming. The air she expelled through pursed lips was no fiercer than a whisper. Gravel crunched beneath her tires as she eased onto the shoulder at the end of the lane and parked her aging sedan. This sense of peace was new, but she was more than ready for it. Her chest rising and then lowering, she let one more calming breath fade from her lips before sliding out, clutching a bouquet. Sunflowers. Pert, and happy. Not too… girly.

She smoothed her cheery blue dress and brushed stray wisps from her face as she strolled to the familiar stone bench and perched on the edge. Warmth seeped through the thin cotton tucked beneath her thighs, a harbinger of the day ahead. Phoenix—a modern city steeped in history and culture—was home. But monsoon season in the desert was no picnic.

She set the blossoms on the seat beside her, rested her palm softly over the stems as if holding her husband’s hand. “Hello, Ben.” She managed a nostalgic smile. “Happy anniversary.”

After a muffled cough she struggled to speak. Tilted her head back and let her eyelids slide shut as words crawled up her throat and were halted by a bitter blockage. The lump appeared with no warning, clotting her throat, unwelcome and impossible to talk around. She swallowed it back, freeing her thoughts. Freeing her emotions which, after her appointment this morning, still rode near to the surface. Freeing
her
.

She needed to talk—it was the reason she came here. For three years now she visited him from time to time. But always on this day.

She lifted the flowers and held them in her hands. In the beginning, in the first months after he was gone—after she
knew
—she found herself overwhelmed. Guilt, shame, anger all swamped her. If only their lives—if only
he
—had turned out differently. But her emotions were tempered by time now and she could at last look back and remember Ben fondly.

She missed him. Missed the hours they spent together. Chatting, catching up at the end of the day. After so many years together, how could she not?

She conjured an image of their son, and a smile stole onto her face. “Trey’s ready to leave for college next week.” If she had a mirror she’d find a bit of dimple denting her left cheek. She always hoped she would outgrow it, but never did, much to Ben’s delight. Memories of their son’s childhood filtered through her mind. “We dreamed of this day often as he grew, didn’t we? You would be so proud of him.

“You’d be proud of Jake, too.” Jake, Ben’s best friend, who still ran the company he and her husband built together. “He’s there for us whenever we need him.” And even though they had a rough beginning, her and Jake, they’d developed a strong familial affection for each other over the years. “As a matter of fact, I’ve already spoken with him this morning.” When the steamy hot shower she’d envisioned following her sunrise run turned out to be nothing more than a tepid spray. Her smile turned rueful. “He’s at the house right now, replacing the water heater.”

Fenway 1912 by Glenn Stout
The Twelve Nights of Christmas by Sarah Morgan
Favorite Places (A TroubleMaker Novel, #2) by Gendron, Kelly
Sex in the Title by Love, Zack
The Orchard by Charles L. Grant
The Pub Across the Pond by Mary Carter
Mating in Captivity by Esther Perel
Blue Warrior by Mike Maden
Fairytale Not Required by Stephanie Rowe
Tthe Sleepover Club on the Beach by Angie Bates
Our partner