Twisted Sister of Mine (Overworld Chronicles) 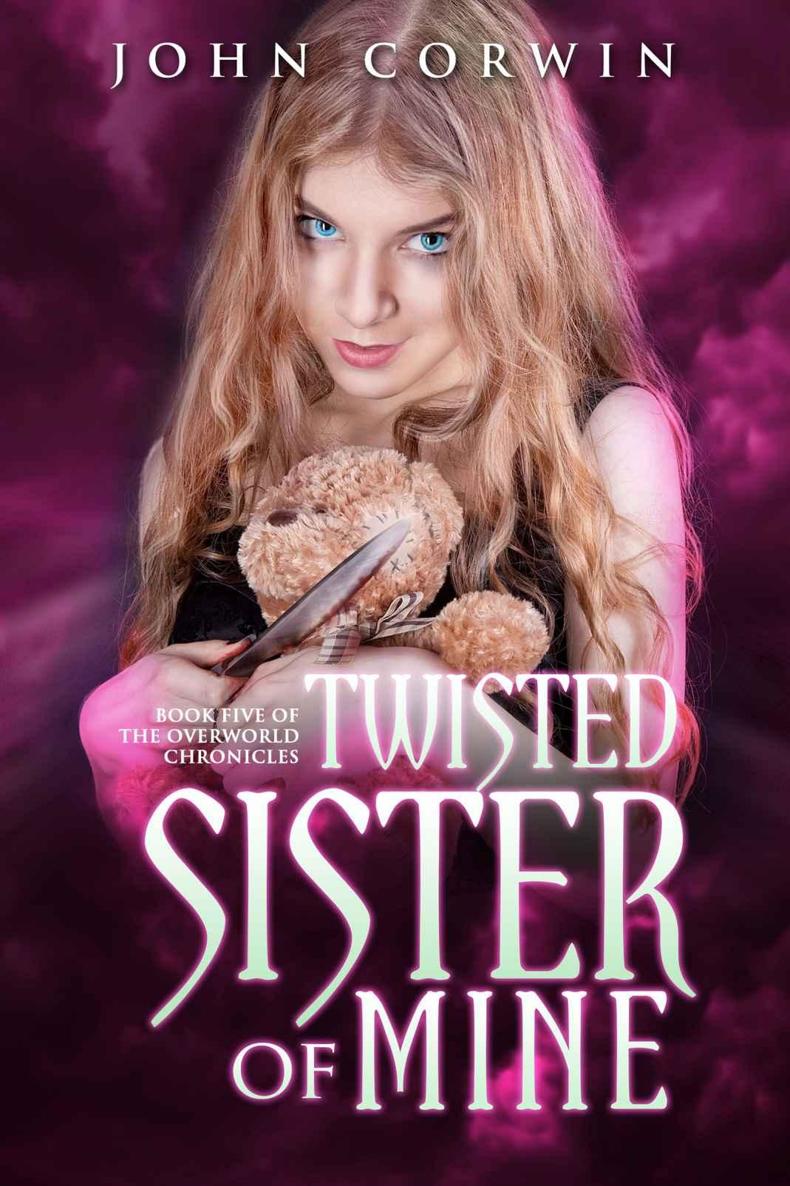 Twisted Sister of Mine

Book Five of the Overworld Chronicles

All rights reserved.  Except as permitted under the U.S. Copyright Act of 1976, no part of this publication may be reproduced, distributed, or transmitted in any form or by any means, or stored in a database or retrieval system, without the prior written permission of the publisher. 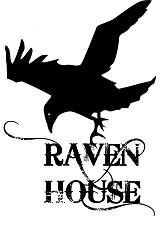 The characters and events in this book are fictitious.  Any similarity to real persons, living or dead, is coincidental and not intended by the author.

This ebook is licensed for your personal enjoyment only.  This ebook may not be re-sold or given away to other people unless expressly permitted by the author.  If you would like to share this book with another person, please purchase an additional copy for each recipient.  If you’re reading this book and did not purchase it, or it was not purchased for your use only, then please go to Amazon.com, BarnesandNoble.com, Smashwords.com, or other digital ebook retailer and purchase your own copy.  Thank you for respecting the hard work of this author.

Little Sister—BIG Trouble
Justin Slade is living on borrowed time.
The vampling curse is gnawing away at his body and his sanity. Because the cure might lie in his special kind of magic, Justin goes to Arcane University in a desperate attempt to unlock his powers.
When he runs into his little sister, Ivy, at the university, Justin realizes this might be his chance to convince her he's not evil. Even better, she might be able to cure him if her shape-shifting protector, Bigglesworth, doesn't eat him first.
Save his sister. Save the world. Save his life. With the clock ticking toward a future as a blood-sucking zombie, Justin has to make every second count.

To my wonderful support group:

Thanks so much for all your help and input!

I stared at the scroll of antique parchment in my hand and felt my eyes widen with wonder. If a bearded giant on a flying motorcycle had just dropped from the skies and personally delivered this letter, I couldn't have been more surprised.

"What is it, Justin?" Elyssa asked, leaning her head against my shoulder.

I continued to stare at the paper. Words failed to break the jumble of emotions blocking my throat. All I could do was glare at the intricate script.

Congratulations. You have hereby been accepted as a novice at Arcane University. Please see the attached schedule of required classes.

Unfortunately, due to the late nature of your application, we were unable to procure living quarters for you at the school. Your name has been added to the wait list, and you will be notified should the situation change.

Elyssa gasped. Took the acceptance letter from my limp fingers. "You're in!" She squeezed the breath out of me with a fierce hug then added a lip-smushing kiss.

"I'm in?" I said, stunned. It was like a dream come true for me. Months ago, I would have jumped at the chance. But now—now I couldn't, and the reason was very simple. Within a month or two, I'd probably be dead.

I nodded, felt my shoulder sag. "What's the point? I won't have time to begin a semester, much less finish a degree."

"What in the hell is going on in here?" Shelton said, striding from his study and into the large room that might have passed for a family room in any normal house, had it not been part of a super-secret hideout buried beneath the Museum Tower in downtown Atlanta. He snatched the invitation from Elyssa's hand.

"Hey!" she said. "Didn't anyone ever teach you manners?"

Shelton burped and ignored her outburst. "Holy mother of a godless goat. My man came through."

"Your friend, Miles?" I asked. I remembered Shelton telling me he'd put in a good word with one of his former professors at the university, but he hadn't seemed too confident in the outcome.

Shelton had asked Miles to look into it before the insanity with Maximus. Before I'd been bitten by a vampling and infected with a curse that would turn me into a member of the walking dead. I dropped into a chair, anger and self-pity slamming my heart back and forth like a volleyball. "Guess it's a moot point now," I said. "Since I'll be a mindless zombie in the next month or two."

Shelton screwed up his face like he'd just eaten a lemon. "Don't be so dramatic. In case you hadn't figured it out, going to school is about the only thing that could save your life."

"Are you auditioning for a role in an after-school special?" I said, scrunching my forehead. "How in the world will going to school keep me from turning into a zombie vampire?"

Bella, a petite Arcane-slash-dhampyr I'd met in Colombia during another of my adventures, sauntered in, arms full of grocery bags. She dropped the bags on the kitchen counter and gave us a concerned look. "Goodness. Is something the matter? Please don't tell me someone ate the rest of Harry's Lucky Charms. I do not wish to listen to him yell and curse about going to the grocery store on an empty tummy again."

"But I'm gonna die," I added, figuring I hadn't said it enough yet.

"Oh, well I suppose that's a little more serious than coming between Harry and his favorite cereal." She pursed her lips, face serious. "Justin, Harry and I have talked about this, and we think the cure to your condition might be through education."

I threw up my arms. "How is spending my final days in classes gonna beat the Grim Reaper?"

Bella and Shelton exchanged looks. Shelton grunted, which apparently meant he didn't want to explain it. She sighed, looking heavenward as if some greater power could ever make Harry Shelton do something he didn't want to.

"First, I have good news," she said, withdrawing a vial from her purse. "Meghan asked me to swing by because she and Nightliss concocted a potion that should slow the vampling curse."

"Well, she made the potion using some of Nightliss's blood—"

Bella shrugged. "The poor dear still isn't doing well after fighting Daelissa." She made a sad face. "Angels have a natural resistance to the curse. This potion should give you another year—we hope."

"And that's what leads us to the second point," Shelton said, walking into the kitchen and pouring a cup of coffee. "The angels made the vampling curse. Supposedly, they're immune to it, or they can heal themselves."

"Then why am I not healing?" I asked, looking down at my bare leg beneath the hem of my cargo shorts. Dark veins had spread from the wound in my calf, leaving the skin looking bruised.

"Because you haven't unlocked your angel magic," Bella said. "We've done our best to help you, Justin, but we haven't found the key. By going to Arcane University, you might discover that part of you and well"—she smiled hopefully—"heal yourself."

"That's wonderful," Elyssa said, tears glistening in her eyes. "Should he take the potion now?"

"Of course," Bella said, handing the vial to me.

"Just one dose?" I asked, looking at the dark amber liquid with suspicion.

Bella nodded. "Meghan said you'll need to take another one in six months."

Hope shone in Elyssa's eyes. Her lower lip trembled, and I could tell she was trying not to cry. This had been hard on me, but I knew it had been just as hard on her. To watch someone you love slowly waste away was probably even more torturous than being the one dying. I wanted to be with her for a long, long time. To love her, to marry her, and, if we were crazy enough, maybe even to have kids one day, like a gazillion years in the future when we were ready.

I popped the cork and drained the vial. It burned down my throat, leaving a trail of fire. All I could do was hope this worked.

"My college boyfriend," Elyssa said, playfully punching me in the arm. "I can't wait!"

Shelton snorted like a horse and took a sip of coffee. "Brings up fond memories."

"Oh, dear," Bella said. "I wonder if those on the receiving end of your memories remember them quite as fondly, Harry."

Shelton leaned over the kitchen counter and leered at her. "Now, what would you know about my college days?"

"The place abounds with rumors." She tapped a finger to her chin. "Not the least of which was assaulting sorority houses with spider bats."

"Spider bats?" I said, my skin crawling at the thought of what those things must look like. My phone buzzed in my pocket. I pulled it out to see another missed call from Vallaena Slade—my father's sister.

"Her again?" Elyssa said, looking at my phone.

"Yeah." Some of my newfound happiness faded.

Elyssa sighed. "She'll never give up, you know."

"Justin's Aunt Vallaena," Elyssa said. "She says she wants to protect him, but it's obviously Daemos politics. With Justin's father marrying Kassallandra Assad, other Daemos are looking for every political advantage they can wring out of it. The only saving grace is that not many know about Justin's existence."

My happy mood plummeted at the mention of my father's imminent marriage. "They can count me out of that brothel of incest and damnation."

Shelton choked on a gulp of coffee.

"So, what does Justin need to be ready for school?" Elyssa asked. "Maybe we need to do some school supply shopping."

"Get him a cute backpack," Bella said.

"How about a lunchbox while we're at it?" Shelton said with a roll of his eyes. "He doesn't need any school supplies. He'll take an assessment test for placement, buy some books, do a couple of panty raids on the female dorms—"

"If I find another girl's panties anywhere on you"—Elyssa pursed her lips and raised an eyebrow—"your college career might be cut short."

Since my girlfriend's ninja Templar training made her awfully handy with a katana, I didn't want to think about the cutting part. "Your panties are the only ones for me," I said with a wink.

"As I was saying," Shelton said, voice rising above our banter. "That's all there is to it."

"Sounds easy enough," I said, though the idea of an assessment exam made my stomach roil. "What happens if I fail the assessment?"

He laughed. "You don't pass or fail it. It determines your placement level."

I didn't want to think where that would put me.

Bella placed a comforting hand on my shoulder. "You'll do fine, Justin. It's nothing to worry about."

I'd heard that before, usually just before blowing something up. So far I hadn't proven to be very capable at the arcane arts. Then again, I wasn't exactly human. After Mom had saved me from certain death at the hands of Jeremiah Conroy, she'd told me how proud she was of me and how much she loved me—a sharp contrast to the previous time I'd seen her, when she told me she never wanted to see me again. And that had been the least of the surprises I'd discovered about her. Meghan Andretti, an Arcane healer, had come to the conclusion that my mom was, like Daelissa and Nightliss, an angel.

It meant the Conroys probably weren't my mom's parents, or my grandparents. It meant Ivy, my sister, wasn't related to them either. Knowing my heritage only raised more questions about the future. According to Shelton and Bella, it could also be my salvation from the vampling curse.

"Something wrong?" Elyssa said, snapping through my train of thought. "You look worried."

I forced a smile. "Peachy keen. I'm just thinking about all I need to do to prep for school."